Hi. I’m not that familiar with Japanese cuisine. As far as the things I am familiar, I have never encountered a tomato or a tomato product*. So I am curious as to what you know of tomatoes in Japanese cuisine and examples you might provide. Thanks.

(*Let’s exclude ketchup…I’ve seen those squiggles over the omurice.)

Like traditional-traditional Japanese food or today’s Japanese food? Japanese do use tomato in many of their foods, but nowhere like Italians or Americans.
Japanese have adapted some of these in traditional cooking
Grill tomatoes from Yakitori: 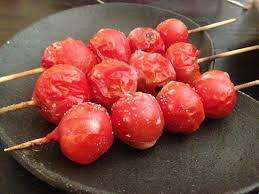 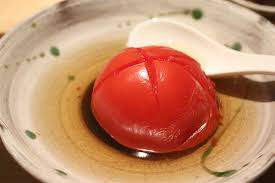 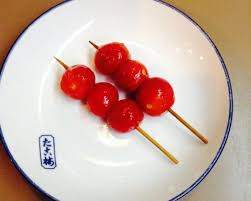 Of course, there are the Western-Japanese Yoshoku (洋食) cuisine, which have a lot of tomatoes.

In either traditional-traditional or today’s Japanese. Is there ever a tomato based soup or tomatoes in soup? Do they enjoy their own Japanese versions of stir-fried egg & tomato or beef & tomato stir fry? Ever used in noodle dishes or do they have a tomato based condiment/sauce preparation?

For the traditional Japanese cuisine, there are not a whole lot of adaption for tomatoes. The obvious one I see is skew grill/yakitori tomatoes. As for the Yoshoku (Western-Japanese) cuisine, tomato is a very important ingredient in the pasta sauce and in stew. Then the natural question is: how impactful is Yoshoku to the overall Japanese cuisine landscape? How much Yoshoku does average Japanese eat?..etc.

I was at a Japanese supermarket and noticed there is always a small section for selling tomato. Then I thought it is probably more objective to look at tomato consumption/sale volume. While this is not perfect (e.g. may not account for finished imported tomato products like imported tomato sauce?), it provides very “hard” data. 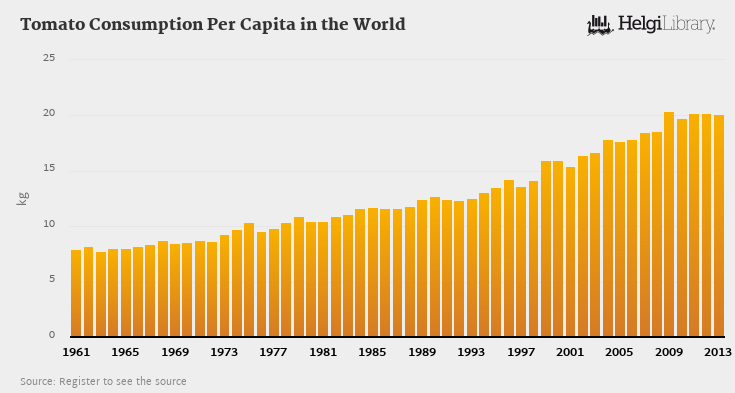 HelgiLibrary - Tomato Consumption Per Capita in the World

China has the climate to grow tomatoes, where as in Hong Kong and Macau, the climate is too humid, so they need to depend on import, which is very expensive. Saw a documentary a few months back, some of the Italian brand tomatoes in can or sauce, selling in Europe hides the fact that the tomatoes comes from China.

China has the climate to grow tomatoes, where as in Hong Kong and Macau, the climate is too humid, so they need to depend on import, which is very expensive

I see. I know China is the number 1 tomato production country – almost a third of the entire world production. I didn’t know it is expensive to import tomato to Hong Kong and Macau. You would think it would be cheaper for Hong Kong and Macau to get tomato from China. Afterall, China does not consume everything it produces. It exports to other countries. Anyway.

You would think it would be cheaper for Hong Kong and Macau to get tomato from China.

You have both, I see in supermarkets the imports from Holland and Spain, perfect in look but tasteless. Chinese tomatoes aren’t good looking. I rarely find delicious tomatoes in Asia, including Vietnam.

I suspect this. I just made some stir fried tomato egg. I don’t use any ketchup in my cooking, but many Chinese recipes call for ketchup. I always wonder if it is because sometome tomatoes are not flavorful, so they wanted to add ketchup to power up the the flavor.

Japan is on par with India, Mexico, South Korea, (8.5-12 kg per capital) and higher than some nearby Asian areas like Macao, Taiwan, Indonesia, Pakistan, Hong Kong, Thailand (2.2-6.5 kg per capital).

Thanks for the research. Hard data is always useful and provides insight. I found the above surprising. In the U.S., tomatoes are so common in any Mexican inspired cuisine.

It is interesting that Americans (37.8 kg) eat almost as much tomatoes as Italians (39.5)

I wonder if they count those tomato sauces in like baked pork chops and what not. Heck the tomato based macaroni in soup with beef (Shout out to Sing Heung Yuen) is a prevalent combination, same with eggs and tomato/tomato with chicken/tomato beef.

Very interesting topic and one I have lots of opinions about.

There is a chef from Hong Kong with a restaurant here near Baltimore. He told me tomatoes aren’t that common in Chinese cooking, and I added that to my knowledge base. However, I found out later that he probably meant Cantonese cooking. Also, I have a Taiwanese neighbor as well as many close acquaintances from Taiwan, and I haven’t seen tomatoes used much in their cooking, but they are all from Taipei, so I have no idea about the rest of Taiwan.

in Hong Kong and Macau, the climate is too humid, so they need to depend on import,

That’s very interesting. Pakistan is insanely humid. I always forget how much until I step off the plane there and it feels like stepping in the bathroom after someone’s taken a hot shower. I have many relatives who grow tomatoes in Pakistan. I guess it’s different when growing large amounts for sale. I wonder where tomatoes at vegetable markets in Pakistan come from during the summer.

Last summer (2017), we made our first visit to China and stayed in Henan province for 5 weeks. We were mostly in Zhengzhou, but we visited many other cities during that period. Immediately I was surprised by how much tomato was consumed; our school cafeteria prepared dishes with tomato almost every day. Other than Luoyang – which has a very large vegetarian Buddhist population – the food throughout the rest of Henan’s cities was very similar.

At first, I thought the tomatoes in Henan might be canned because the quality was pretty good and I didn’t expect Chinese tomatoes to be so flavorful. But they showed me the large shipment of tomatoes that arrived every morning. Later, we also visited a farm and saw different varieties of tomatoes growing there. In late June and July of this year, we spent 5 weeks in Beijing. I had cherry and grape tomatoes from supermarkets there better than anything from Trader Joe’s or Whole Foods here. Also, I was bragging about heirloom tomatoes to our AirBnB host and she brought me heirloom tomatoes from a farm close to her home in the suburbs. (I later visited that farm, too.) Our heirlooms in Maryland haven’t been great this year, so those were the best tomatoes I’ve had all year. I posted pictures of the tomatoes in the July WFD thread.

This data doesn’t sit right with my personal experiences. I grew up with many Egyptian friends, mostly from northern Egypt. At present, I have a very close Egyptian acquaintance from central Egypt, one I visited 4 times a week for the past 3 weeks. She is one of the best cooks I know. (I just had one of her liver subs today, like an Egyptian banh mi, I guess.) I have not witnessed anything that would make me believe Egyptians consume such large amounts of tomatoes compared to Pakistanis. In fact, I have never seen a household of any of Pakistan’s ethnicities without tomatoes. I have access to many Turkish individuals, so now I know my next topic of conversation with them. (Our local mosque has a Turkish Imam. Can’t wait to see his reaction when he thinks we are about to ask a complicated theological question, but instead we just want to know if he ate lots of tomatoes growing up.) Off the top of my head, I am thinking these countries might have large tomato-processing industries and that most of that product is exported.

I’ll give you salsa and red sauce. Ketchup, however, is universal. As far as raw tomatoes, after running a “pop-up” stand for the last 5 years and giving away food to my neighbors and friends, I’ve accepted that a very large percentage of Americans just don’t like raw tomatoes. I mean unless the tomatoes are not absolutely perfect candy-like jewels, about a third of people will not eat them.

Sorry @seamunky for hijacking this thread. I was in Japan (Osaka) for 4 days in early August, but I don’t feel comfortable drawing any tomato-related conclusions from such a short stay.

Pakistan is insanely humid. I always forget how much until I step off the plane there and it feels like stepping in the bathroom after someone’s taken a hot shower. I have many relatives who grow tomatoes in Pakistan. I guess it’s different when growing large amounts for sale.

Or maybe F1 varieties that resist humidity problem. We got some very wet summer here, heirloom tomatoes leaves got all types of sickness, affect production.

Good to know that you tasted some pretty good tomatoes in China.

I think in any place where you can get real vine ripen tomatoes (heirloom or not), you will get pretty good quality tomatoes. Most supermarket tomatoes do not taste great, because most of them are picked at green stage, shipped and then gassed with ethylene.

Since China is the largest tomato producer in the world, this also means that more people will be lucky enough to have access to farm fresh vine ripen tomatoes.

Also because Chinese is the largest producer, it would mean tomatoes are quiet cheap in China (compared to other fruit and vegetables). This can easily drive a national cuisine in a certain direction.

Of course, maybe the definition of “consumption” is not well defined…etc.

Of course, anything’s possible. As I get older, I tend to question some memories because memories lie, even vivid childhood memories. At the same time, I don’t see any discussion of data collection methods that would make me trust these sources. And, yes, a better definition of terms would be nice. Does “consumption” exclude the production of products for export? The two datasets’ difference on Italy is odd, as well.

Firstly, I would just want to know how data was collected in the United States. I asked a couple farmers at the farmer’s market today if they could guess how such data might be collected and they were unsure. They don’t report tomato production, but they said they are relatively insignificant compared to the large producers in Mexico and Canada.

Again, if I had to to guess, I would say they are including exported products in “consumption”. It could just be regular everyday terminology in the field, where per capita consumption is just a number and does not imply that residents of that country are actually eating those tomatoes.

they said they are relatively insignificant compared to the large producers in Mexico and Canada.

Probably they meant tomatoes purchased by regular customers. Outside of summer, most tomatoes at my local supermarkets are from Mexico. In fact, I can’t remember the last time I saw a U.S. tomato at the supermarket in fall/winter/spring.

Edit: Hmm, is it different outside of the Mid-Atlantic region?