Trader Joe’s has closed their Union Square wine shop within notice and little explanation. Apparently not a rent hike issue either. NY has funky laws about retail sales, so it may be they just want a new location (they’re only allowed one), but closing abruptly is strange. 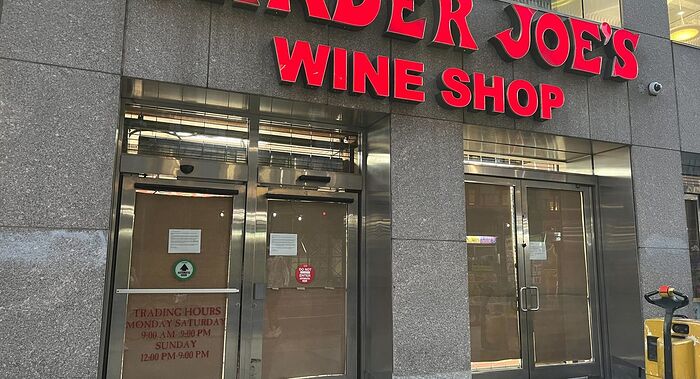 Customers were left wondering what happened, with only a note taped to the front of the store that explained the closure.

“Trader Joe’s Wine Shop was known for its wide selection of cheap wines and had a loyal customer base”.

Reading between the lines of the article, this might have been the problem. They just don’t want to say so. Time to move.

Very sad about this. What I’ve read indicates that NYU was their landlord, and making things difficult for them. So, because TJ’s is only allowed to sell wine at one location in NYC, they’re planning on moving to a less restrictive location. The sucky thing is that I really liked doing a Greenmarket/Whole Foods/Trader Joe’s Wine Shop sweep, and it looks like that’s over.

What problem are you seeing in your between-the-lines read? The cheap wine? The loyal customer base? Neither of these strikes me as a problem.

Who do you think shops there? Because I’m the clientele - I’m in there at least once a week. And a bunch of other people who don’t seem “problematic” to me in the least.

Look, a lot of places in NYC are closing up shop due to shoplifting, homeless problems, crime in the area. I guess you know something I don’t know since it’s your neighborhood. Sorry if I stepped on your toes.

I guess you know something I don’t know since it’s your neighborhood.

I do, which is that crime does not seem to be a problem in Trader Joe’s. I already posted about the probable cause of the move, which has nothing to do with theft, nor the unhoused.

Crime has definitely affected drug stores - CVS and Duane Reade are locking up a lot of their products, which is irritating. And Target has amped up security. Grocery and wine stores, not so much.

Any specifics in what NYU was doing? Their brief statement snippet, per the article, suggests nothing.

Yes, going off of this, from https://evgrieve.com/

The store still gets plenty of foot traffic, even after the pandemic - so I promise that isn’t the issue here. Both the wine store and the grocery store next door are in a building owned by NYU, which is fine for the grocery store, but the wine store had to jump through hoops constantly to keep NYU happy. In fact, the wine store even has the license to sell their TJs brand liquor that you see in other states, but NYU wouldn’t allow them to sell it due to their proximity to underage college students.

If anything, we’ll see the wine store pop up somewhere else in Manhattan, probably adjacent to one of the existing grocery stores, and I promise it’ll be a way better store than it was now that it’s out of NYU’s grasp.

I wish it were coming to the one close to me, but I suspect rent will be too prohibitive there and it will end up in Chelsea or Gramercy.

I’m pretty confused by what this meant.

That the clientele who was loyal and enjoyed inexpensive wine… caused the store to close?

The later comment about shoplifting, homelessness, and crime has nothing to do with the clientele, so color me confused.

So…. NYU leased the space for a Trader Joe’s Wine shop but doesn’t want them to sell hard liquor. Maybe understandable, but you’d think that would have been specified in the lease. Here in CA (and in lots of other states) licensing is separate for wine and hard liquor anyway. Don’t know about NY.

NYS liquor laws are convoluted. Basically, beer can be sold in grocery stores and wine/liquor in what we call “liquor stores”. Liquor stores cannot sell beer and are very limited in what they can sell that isn’t wine/liquor.

My guess is that the TJ wine shop lease was up and TJ was trying to negotiate new terms that NYU didn’t like or wouldn’t agree to. I would be very surprised if TJ didn’t open up a new location very soon.

Yes, the initial announcement (if you can call it that) from TJ’s says they plan to relocate the store. On the one hand, I would like them to be closer to me. On the other hand, I don’t want them to threaten the local wine stores. Quandary.

My guess is that the TJ wine shop lease was up and TJ was trying to negotiate new terms that NYU didn’t like or wouldn’t agree to.

"There’s been no change in NYU’s lease with Trader Joe’s, and it has several more years to run. The closure of the wine shop is a decision Trader Joe’s made independently and internally,” NYU spokesperson John Beckman told Gothamist.

I read an article yesterday about the problems they’re having at the Manhattan Starbucks and decided to put 2 + 2 together. As it turns out, my math was wrong.

Thanks. I only skimmed and didn’t see that. 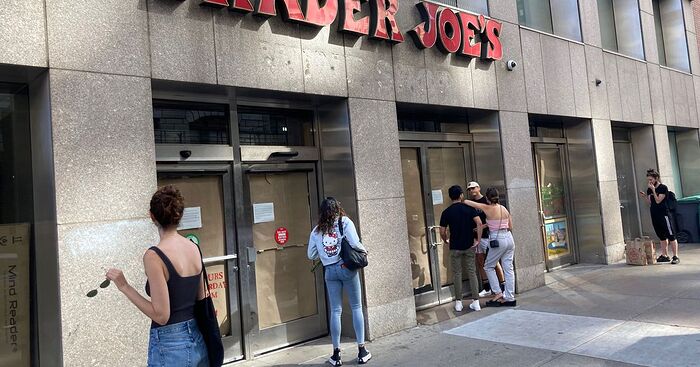 Employees claim management’s response to a unionization effort is the cause of the sudden shuttering.