No matter what your religion (even if that is no religion at all), 'tis the season to crank up the oven (at least in the Northern Hemisphere) and bake! I am generally too busy in December to do much baking myself, but we got our first snow today and I have a rare Saturday with nothing to do, so I decided to try out a new cookie recipe. This recipe for St. Nicholas Letters in Food and Wine caught my eye - I’ve never seen anything quite like it. http://www.foodandwine.com/recipes/st-nicholas-day-letters

I made my own almond paste and put these together earlier in the day - both the dough and filling (and the almond paste, if you’re making your own) are quick and easy to do in the food processor. Filling and shaping is a bit futzy but hopefully worth it! They’re in the freezer now, firming up before baking. I’ll report back when they’re done.

In the meantime, I look forward to seeing your winter baking projects. Happy holidays!

Apart from periodic pasties, my only guaranteed venture into baking is the annual making of the Christmas mince pies. And that, by co-incidence, was yesterday.

I buy the mincemeat filling and enhance it with a slosh or two of sweet sherry. Pastry is a sweet shortcrust, with added orange zest and orange juice as the liquid. It’s made 24 of the little beauties which are now in the freezer. Xmas Job #1 - sorted!.

There’s about half a jar of mincemeat left. That’ll probably find its way into Nigel Slater’s recipe for mincemeat hotcakes. Or simply warmed through to become a sauce for icecream.

Mrs Harters (who is the demon baker of the partnership) promises a pithivier as dessert for our French inspired Xmas Eve dinner. And one of our Christmas leftovers meals that we do sometimes involves a sheet of shop bought puff pastry - the leftovers are dumped into the middle of the sheet and the corners brought together, egg washed and baked. I suppose it’s really just another pasty and pretty much anything savoury goes here - turkey, ham, mushrooms, chestnuts, cream, gravy.

Any leftover can be elevated by wrapping it in pastry! Your mince pies sound lovely. Does your filling include beef suet?

I’m happy to report that my St. Nicholas Letters were WELL worth the effort! The pastry is flaky and buttery, almost like puff pastry, and the filling is just sweet enough. Equally good warm or cold, great with a cup of coffee. I doubled the cardamom in the recipe and I might triple it next time, or perhaps add a little cinnamon. I’d probably also just make them into ravioli shapes instead of the little tubes next time - the tubes were a pita and several of them leaked. 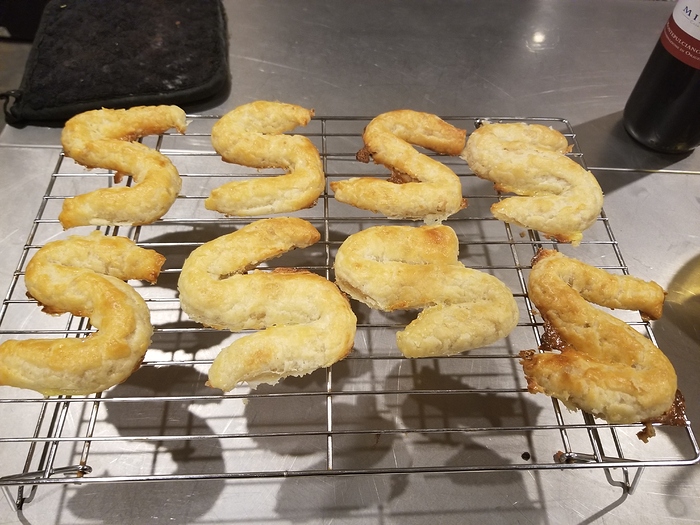 Does your filling include beef suet?

Most supermarket mincemeat jars now use vegetarian suet (made from palm oil according to the label), presumably making it available as a product to vegetarians, etc… I suppose it cuts the last ties to the traditional meat and fruit pies that used to be made until about the middle of the 19th century when the meat started to be left out, leaving only the suet. I did make my own mincemeat once and, of course, I used “proper” suet but it really didnt seem worth the effort for the improvement in quality over a top level bought product.

Your pastries look and sound lovely.

Four down, six to go. I have a bit more time on my hands since I had to stop working to take care of my husband, and this is a great way to pass the time since I have to stay home now mostly. Great therapy

So far: Bourbon balls, Snickers Surprise, NY Bakery Cookies, and Lemon Stars (have to sandwich them together with lemon curd as soon as I’m done here!) Coming up: Linzer Tarts, Irish Coffee Cookies, Rainbow cookies, Peanut Butter Spritz, Mandelbrot and an interesting recipe I found on Leite’s Culinaria…Fig and almond filled Rugelach with green cardamom in the dough. (Cardamom must be a new trend!)
What can I say, I have a big family! 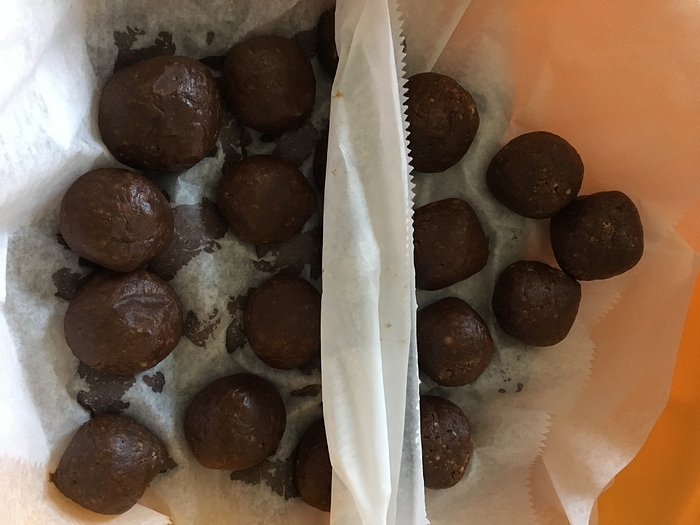 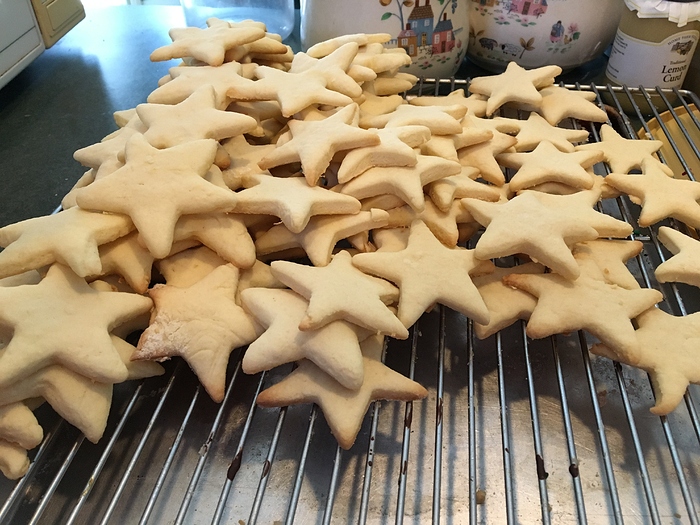 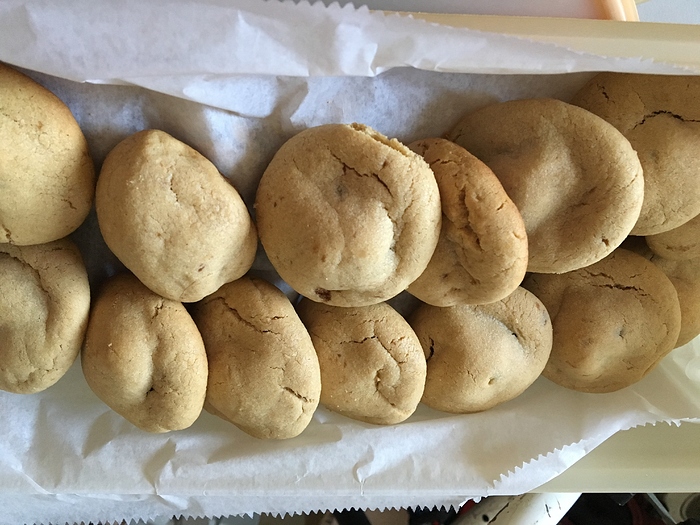 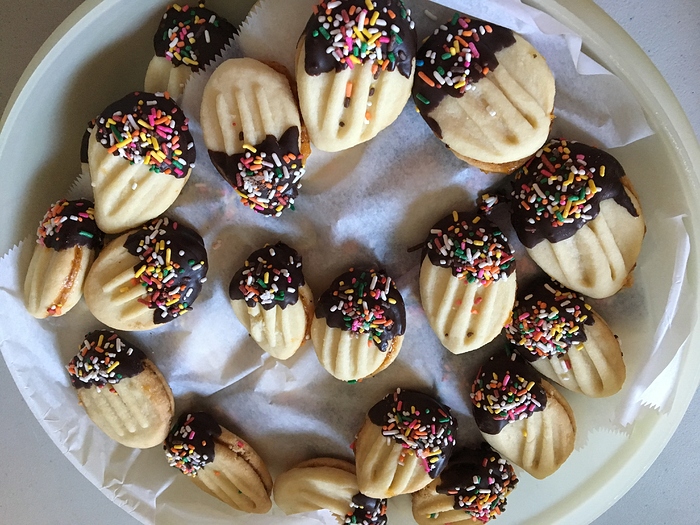 My aunt used to make a wonderful mincemeat pie, actually dozens of them; but it got a little too overwhelming as people kept reminding her not to forget them. Oh and no one ever returned the expensive ceramics dishes she got at Zabars either, which befuddled her. At least I have my memories (and maybe the recipe, now that I think of it?) SO good though.

Someday maybe you’ll share your almond paste recipe? I can get the canned at my local grocery but when it’s on sale half price this time of year, someone comes in and scoops them all up…probably a bakery! I did remember this year to buy some in the summertime at least.

Lemon Stars (have to sandwich them together with lemon curd as soon as I’m done here!)

The address to send my share of these is:

I’m not sure where you are, but my local shoprite in Warwick, NY carries this
https://www.solofoods.com/product/solo-almond-paste

Ha!! I ship most of mine, but I never report them as perishable which is required here…wonder how strict they’d be on your end

That’s the one I buy: Used to be a can but now it’s bag in a box. I just have to make sure to procure them outside this time of year…but they are usually $6+ then, whereas right now they are advertised at $3. Would be a great deal if they were ever in stock (Best Yet is where I find them here). I have enough for this season now though, thanks!

Oh! And it was just announced that our old Waldbaums is going to be a Shoprite shortly, so all the more reason to visit them now.

wonder how strict they’d be on your end

Tricky question. As not really answered by the Department of Environment, Food and Rural Affairs.

If you were sending them from another European Union country, then no problem.

Possible problem for other countries as, whilst cakes & confectionery are generally exempt from regulation. However, there’s an issue with “high levels of dairy products” which presumably may include the butter in the lemon curd. I think we should risk it - and, when we appear before the judge,argue that, as a percentage of the weight, the dairy is NOT a high level. I’m sufficiently confident in your cookies that we offer the judge and the prosecutor a sample - and then we win. Waddya think?

I’ve always wanted to visit your fair country, maybe if I get arrested and have to go to court they’ll fly me over all expenses paid?? I’m game!

I liked the look of a pear and toasted ground walnut (Bosc pears) upside down cake I saw on ATK.

EVERYTHING on the Great British Baking Competition’s holiday baking special, with Paul and Mary, was appealing.

Surely - today’s the day! I consulted a baker friend who makes all of his own nut pastes, and he told me 50/50 nuts to sugar by weight is the standard. In this case, I knew I would be using it for a filling that had quite a bit of additional sugar added, so I went with 60/40 and I was quite happy with it. I just put 3 oz blanched, slivered almonds in the food processor with 2 oz powdered sugar and let it rip until it started to clump a bit, then added 1 tablespoon of water and continued processing until it turned into a paste. Super simple and better tasting, IMO, than the canned stuff.

Wow, so simple! Thanks for sharing, this is going to be a big help to me. So hard to find almond paste this time of year around here.

This one is just fantastic. A Nigel Slater recipe from his latest book “The Christmas Chronicles”. An absolutely easy peasy pork terrine.

Soften the onion in butter. Mix everything together, including seasoning (keep the salt light as the bacon will have a fair bit in it). Press into a terrine (or loaf tin). Put in a roasting pan and fill with hot water to about half the depth. Cover with tin foil. Bake for 80 minutes at 180C. Leave to cool in the switched off oven. Put some weight on it (a couple of tins of beans, for example) and fridge overnight. It’ll firm up well. - and there’s some lovely jelly surrounding it

I slice and freeze mine - wrapped in greaseproof paper and more tinfoil. But, if you were going to serve it as a piece, you could have decorated the top with, say. bay leaves or cranberries before baking.

I’ve just tried a slice and it really is fab. I wasnt convinced by the idea of the fruit (although we usually serve a fruit chutney with pate) but it really has worked. And, with the fruit in it, it looks really lovely. Such a change from my usual pate de campagne.

I have Christmas covered (has to be Italian) but this might be a great New Years Eve treat for the two of us. I do have a Nigel Slater cookbook someone gave me, I really should be perusing it a bit more often than I do.

Oh no, I just remembered…even though my aunt is also my Godmother, she could not give me the recipe. It was a friend’s mothers, from England (or Ireland?) and she was sworn to secrecy…glad I have a lead on another now, thanks to Harters

We prepared to leave for our holidays, need to finish the fruits before leaving. Baked an pineapple and mango tartin tart with a ready made puffy pastry. Supposingly there was a syrup with reduced orange juice, with ginger and honey. I was busy preparing the pineapple and was too late to look at the fire and only half of the syrup was saved from burning on the stove. Syrup was then poured on the fruit before putting the which tart with he puff pastry in the oven. It was a good fruit tart, we didn’t sense the burnt caramel on the fruit, so not a good tartin tart. 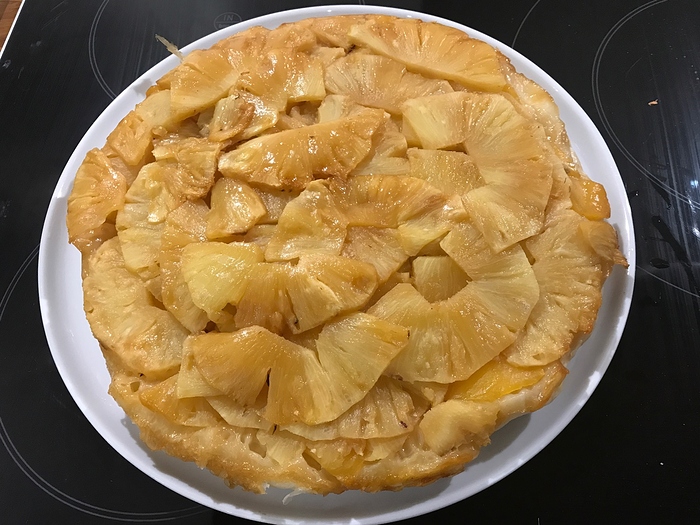 The second tart I made before leaving was a lime tart with basil. It was a classic chez naf using Jacques Genin’s famous recipr. I used some butter to fix the tart that had some cracks. 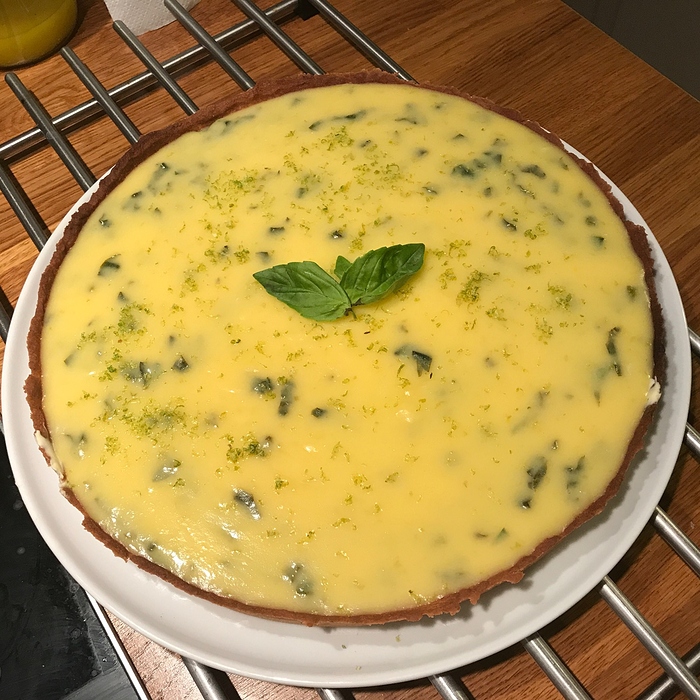