Time magazine has an interesting article on what families eat in a week worldwide. 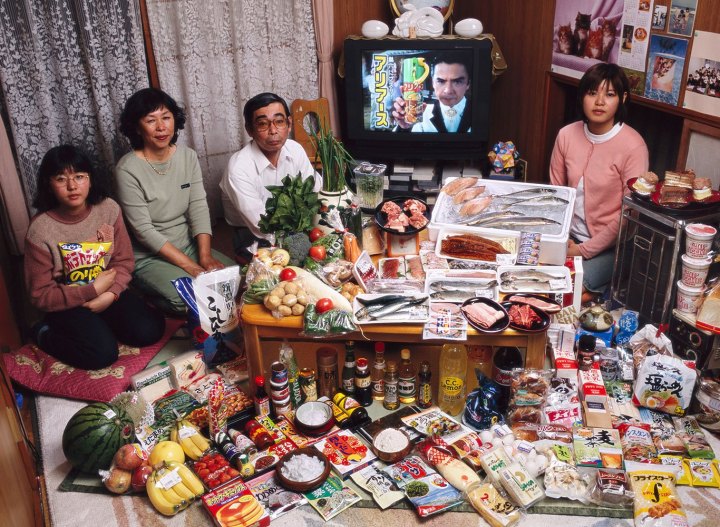 Hungry Planet: What The World Eats

American photographer Peter Menzel and writer Faith D’Aluisio have traveled the world documenting that most basic of human behaviors—what we eat. Their project, “Hungry Planet,”…

Just realized this is article is at least 2 years old! Missed the date entirely.

Just realized this is article is at least 2 years old!

I have it in mind we had a thread when it first came out. But an interesting article and worthy of looking at again - thanks.

Scrolling through the pics was a bit eye opening for me. The family from Istambul, Turkey consumes (my count) 27 loaves of bread per week.

The family from Mexico consumes 12 two liter bottles of Coca Cola per week.

Kind of sobering to mull how much it costs to feed a family in a First World nation.

I was fascinated with the differences in volume and cost.
The packaging really caught my eye. Such waste.

The difference in cost is striking! Many places around $300/month; $1.23 in Chad! Also funny that hot Dogg’s and frozen fish sticks among the favorite of the family in Sicily, while pizza looks like favorite in many places.

I am also noticing the amount of bread varies quite a bit, as does the proportion of processed and “fast food”.

The difference in cost is striking!

Not really, once you look beyond the headline figure - effectively what it costs in American dollars. And you really do need to try and look behind the headline figure which, in itself, is meaningless. It tells you nothing about the relative costs of living and, more particularly, what percentage of the income of those families is taken up with the cost of eating.

Not sure I understand this part;
"Not really, once you look beyond the headline figure - effectively what it costs in American dollars. "

I agree that it is relative to cost of living, but I’m not sure it’s irrelevant. That family in Chad does not look like it’s spending much on housing either!

I wonder if the inclusion of televisions in some pictures means anything. I’m going to pull out my book.

Not sure I understand this part;

There is no easy way of comparing the cost of living between different countries - we each have our various incomes, taxes, cost of housing, food, etc. Without taking the information in the round, it is a pretty meaningless exercise.

It is not impossible however - but a bit of lateral thinking is needed. For example, at its easiest level, compare the cost of an item available in, say, two countries. Let’s say a Big Mac. Then work out how long the average person has to work to be able to buy the burger. You then have a relative food cost (albeit of just one item)

“It tells you nothing about the relative costs of living and, more particularly, what percentage of the income of those families is taken up with the cost of eating.”

I can’t argue otherwise, but for some reason I’m having trouble wrapping my head around the idea that it tells you nothing. It seems like food and shelter is a major driver for cost of living.

In the book I have, the contents are " in sequence of the number of calories" rather than dollars, and “most of the people interviewed for this book felt they had more than enough to eat”.

It is interesting to note that the same pictures or idea can be sold under different premises.

The phrase “headline figure”, and why you mentioned American dollars.

Ah, thanks for that. I’ll try and explain my wording as best I can. I used “headline figure” as that’s what I felt it to be - like a newspaper headline that only gives an indication about the subject - but you have to read the article to understand things fully. And “American dollars” because that was what was used as the common currency. Had it been in pounds, euros, etc, I would have said British poiunds or European euros - but it didn’t. Hope that explains things fully now as to why it really tells me nothing about relative costs - the photos obviously tell much about the differences in what people eat - the processed foods of the First World, for example.

For example, I might look at the $731 that it costs the Norwegian family. If I only looked at the headline figure, I might conclude that food must take up a very high percentage of that family’s income. But, of course, if I look further, I might realise that folk in Norway have high incomes and fairly low taxation, so that amount of money actually isnt a large percentage.

Cost of Living is a very real determinant in food grocery shopping. I get that. But cannot understand the “premium” costs of, say cereal, between where it is produced, and where it is sold for consumption.

I guess I’m not on board with “mega government” policy-making in any way, shape or form.

Completely agree. Those of us who live in the First World are fortunate that our general standards of living permit us to choose to eat meat if we wish and, perhaps even more significantly, allow us to import foodstuffs from whereever in the world, so nothing is ever really “out of season” (although I’m not buying strawberries in January wherever they’re from.

And the waste! Egads! But that’s a different topic.