Hungry Onion veteran Steve and I got together for lunch with two former Chowhounders, Lilychili and Bougouni, who have yet to migrate over to the Hungry Onion, despite all blandishments. The spark behind the trip was Steve’s post about the pickle pizza at Tigerella, and a second thread, about roast pork and broccoli rabe sandwiches, added fuel to the fire when I discovered that Tigerella offers one.

The scene of the meal was the Western Market, a new food hall with a wide range of offerings. We all grabbed a table near Tigerella, and then spread out to gather food from the restaurants named in bold below. We split everything four ways.

Tigerella was the lone place without an ethnic identify, or any real theme. It’s divided into a coffee-pastry shop, a lunch/dinner kitchen, and a wine store.

The pickle pizza ($17) was a 6-8 inch round of a thick, focaccia-like bread with a sweet, chewy, highly caramelized caramelized edge. 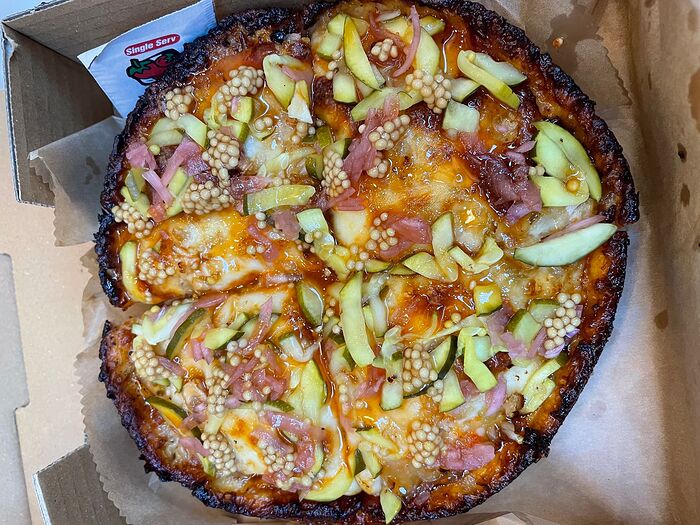 Atop the crust was a thin layer of mild garlic cream and a scattering of pickled vegetables. The pickling was bread and butter-type pickles, so that the overall effect was sweet. Steve and Bougouni really liked it. I was disappointed, a I prefer thin-crusted pizzas with strong savory toppings – kalamata olives, anchovies, spicy meats, etc., and I dislike sweet. pickles, so the pickle pizza, intriguing as the name was, left me cold.

Colder still was the pork and broccoli rabe sandwich. I seem to have deleted the photo. Picture an unbalanced sandwich, about five inches long, with too-thick bread and too-little filling. Worse, it had too little flavor. The garlic was in hiding and the pork was might as well have been a chicken breast. Only the broccoli rabe had much flavor. ($17). No one thought much of it.
Arepazone

The Arepazone contributed (in return for $7.75) a Venezuelan style arepa, the Domino, 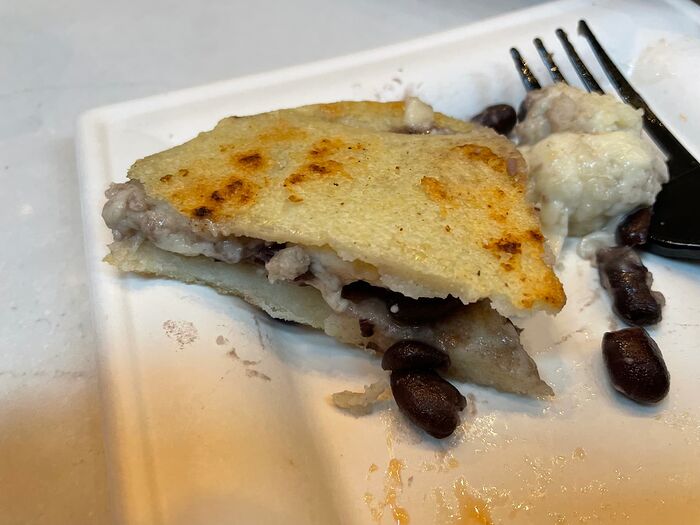 stuffed with black beans and shredded quesadillas de mano cheeses. The arepa itself was delicious, and the filling had a pleasant flavor. 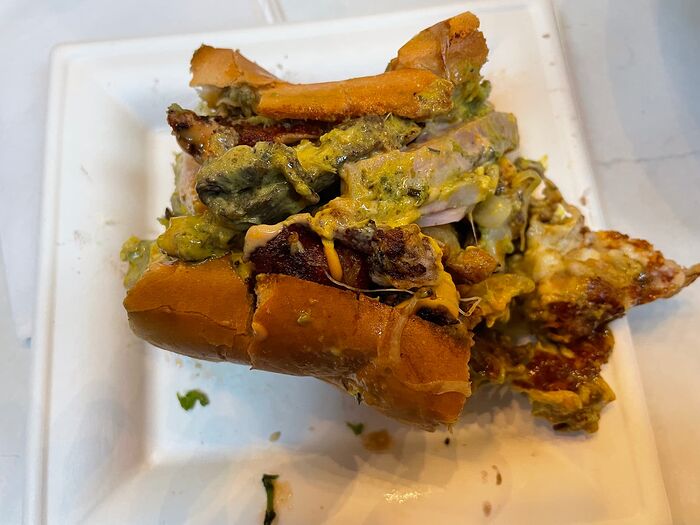 That’s a whole lot of sandwich for $16, plus a possible dry cleaning bill, and a whole lot of flavor. I enjoyed it immensely. I started off picking things out individually with my fork to get it under control. That was delicious but it was so much better, so flavorful, when I took bite of everything together. This is a heck of a sandwich.

Bandoola Bowl is a Burmese-owned spot that offers, of course, Southeast Asian food. it’s owned by the same folks who have run Mandalay for 20-odd years. We ended up with three bowls, each of which was vegan and probably gluten-free. Each had a base of fresh crisp cabbage, and each cost from $10-13 each. 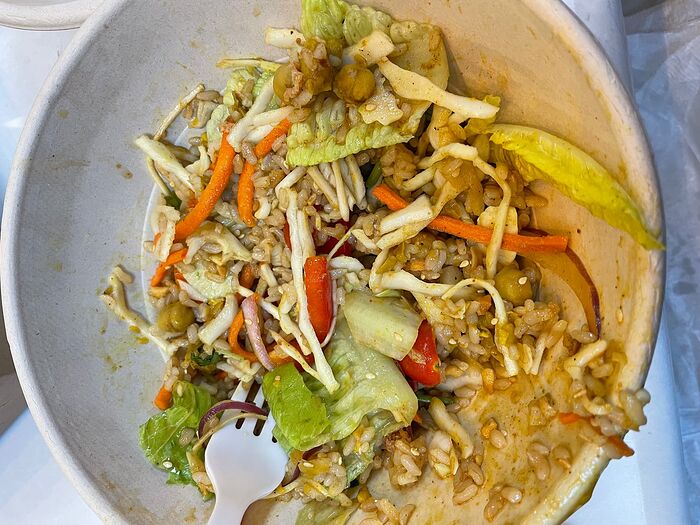 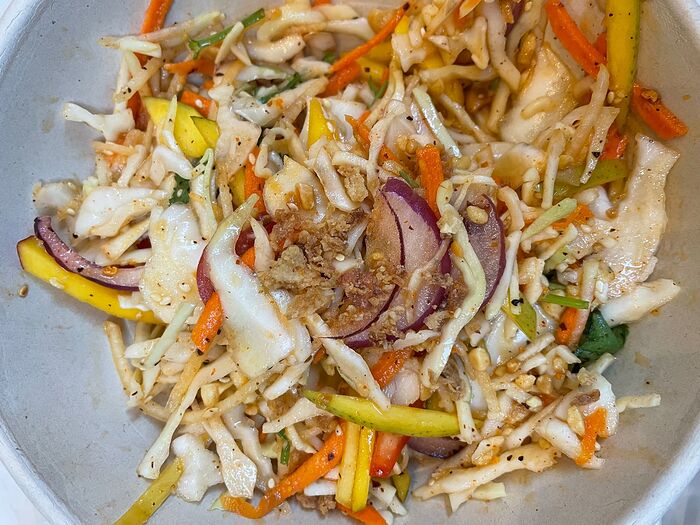 All of the salads were fresh and crisp and, very similar with all that cabbage – I like raw cabbage. The Mango Bowl had a moderate spicy-hot accent that I found pleasant, and of which no one complained. The fresh ginger was a big plus for the Ginger Bowl. Handsome stray ginger brightened the chick pea curry, which I think was the consensus favorite of the bowls.

All in all it was a lot of food and a wide range of foods, quite a meal. And it was a treat to meet Steve, whose commentary I’ve enjoyed for years, and to get to know him and the other members of the Chowhound diaspora. I look forward to getting together with them again and getting to break bread with other HOs.

Thanks so much for the detailed write-up and photos.

The two Chowhounds who joined us were skeptical at first of the pickle pie, but I believe it won them over. The one piece I had made me want to return again, and soon.

The roast pork sandwich form Tigeralla was a disaster, the worst of its kind. I imagine anyone could do better at home.

The Guatemalan sandwich I would consider getting again, but without all the russian dressing and mustard, or at least getting it on the side. They drowned it so I could not distinguish all the meats.

The bowls at Bandoola are acceptable, but don’t hold a candle to a what a good Burmese restaurant can do. Like a lot of these ‘bowl’ operations these days, they throw in a bunch of raw ingredients and squirt a sauce on top, so its economical and quick.

It was great meeting John for the first time, and the meal was varied and exciting. Hope we can do more of these!

Thanks for the detailed write-up and photos as well. I have to say that this pickle pizza looks and sounds like an abomination.

It’s hard enough to make pizza properly in the first place without moving on (?) to such things.

I’d much rather see different styles of pizza from Italy flourish here in the US than something like this which might best be called some sort of ‘torta rustica’ mutant.

On another thread I described the pickle pie not as a pizza but more like a bread with toppings. Similar to a focaccia. It is certainly not an abomination, and I consider it a five star delight. I already want to go back for more. Although it is indeed hard enough to make a great pizza, this is not an attempt to do that.

But I guess from your attitude you will never find out.

As per above, I didn’t like it – too sweet and not really balanced, buy “abomination” is strong, as for that matter is five star, IMHO. It seemed to me more of a gimmick than a potentially great dish. But some folks clearly like it, and this is America, after all.

That doesn’t look like any focaccia I’ve ever seen either. As a food item called ‘pizza’ it’s an abomination.

I’m glad you enjoyed your food in any case.

I appreciated the review and photos even if that particular item still seems to me to be an abomination when classified as some sort of pizza.

It sounded to me like a gimmick as well and by the looks of it, successful on that score.

buonaforchetta – what are some of you pizza favorites in the area? U;ve been testing “craft” pizzas in NW DC (slowly) and am looking for new places

The pickle pie is its own thing, which apparently rankles you.

So far I would say that my favorites (with pretty different styles) for full pizzas (not slices) are In Bocca al Lupo, Pete’s and maybe 2 Amys. In Bocca al Lupo is going for a Roman style pizza. I’m very much in favor of this and it sounds like you might be too from what you wrote.

Pete’s is New England style pizza and I think they do a good job of it (I’ve preferred it to some of the Frank Pepe’s I’ve had though there seems to be more variation on those both across and within locations themselves than what I have seen from Pete’s).

2 Amy’s is probably the Naples style place I’ve liked the best in the DC area out of several I’ve tried.

I have tried slices a bit as well and have to go through those and see what my impressions were more specifically. From memory, I think I liked Sonny’s most for that. I recall trying Menomale NoMa, Wiseguys, Union Pie, Vace and a few more which were recommended to me.

If you have (or anyone else has) suggestions, I’d be curious to hear them and compare notes.

It doesn’t bother me in the least that the food itself exists. I don’t think it should be called pizza though and pretty much any Italian would actually find my comments mild on this score.

I like Pete’s, and I’ve been meaning to get back to 2 Amy’s after many years. The others I’ve liked recently are Comet Ping Pong, Pizzeria Paradiso, both in upper NW, and Tazza across from the Kennedy Center. I’ve reviewed all of them on my blog, so you can glean my preferences.
Is Bocca al Lupo the same people as I’m Eddie Cano and the Italian Bar? I’m a fan of both those. I haven’t tried the others. I don’t get take-out because Nancy doesn’t like pizza, or rather doesn’t like to eat things with that many calories, and I tend to keep eating as long as it’s in front of me.

I’ve been to Comet and Paradiso a couple of times and enjoyed them both. I probably like 2 Amys a bit more but I enjoyed all 3.

In Bocca al Lupo is indeed from the Eddie Cano people and stands out from the others in terms of style.

I hear you on the take-out (and that would be unfair to the pizzas too, especially a Roman style pizza like In Bocca al Lupo’s pizza). I still eat it when I can anyway (and that’s also why I look into slices

Maybe we should make this a general discussion on pizza with its own thread and see if it attracts some more input as well.

Bounaforchette – A DC area Pizza thread is a great idea. Would you like to start off with a. favorite or top X – or a public appeal

Thanks, John, I went ahead with that and appreciated your input there too !

By the way, the meet-ups sound like a great idea and I would be interested in the future.