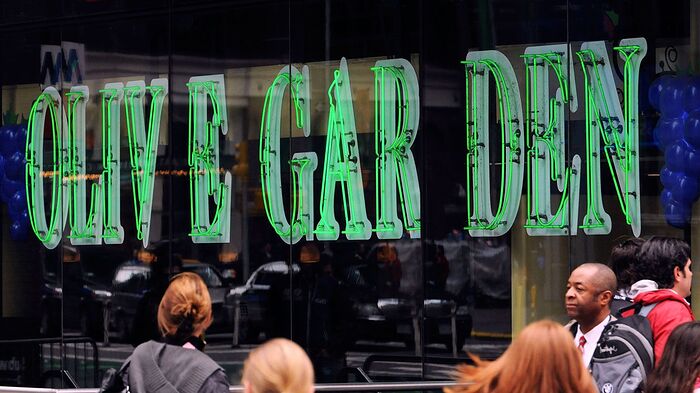 I Ate Alone at the Times Square Olive Garden for Ten Days, and I'm Different Now

The luxury of Olive Garden's Never Ending Pasta Pass is that you get to believe—if only in spurts, if always fleeting—that peace is renewable and limi...

Full disclosure: I’ve eaten at OG exactly once for lunch. Never again. And their ads might be in the top #3 of unappealing to the point of disgusting. “Alfredo” everything?

Reminds me of an article, in the UK, some years back of a guy who only ate from fast food places, three meals a day for a week or two. Put on loads of weight, soaring blood sugar levels and generally felt ill after it.

As for Alfredo, I’d never seen it in Europe, not even in Italy, and my first encounter with it was the Americanised version in an Olive Garden. I quite like it. Particularly the creaminess which, I understand, is not in the original Italian version.

Never eaten there. I figure if the food in their ads is the best it can possibly look… yeech! Many years ago… (I think it was 2003) I was dating this rather large woman and we went to Olive Garden for their “Never Ending Pasta Bowl”. They cut her off after 3 bowls and refused to bring her any more after she finished her 3rd bowl.

Great article. If I recall, OG salad and breadsticks were pretty good when I was young and then went downhill. Or maybe I just got older and my tastes went uphill?

I haven’t been to one in at least 10 (20?) years . . . I had some coworkers who liked it for a cheap lunch. But to this day I marvel at how crowded its parking lot always seems to be despite the fact that there are some pretty good Italian and Mediterranean spots around.

My favorite OG story was what I recall was my last visit. The two people at the table next to us were seemingly finished with their meal, but then asked for refills–salad, bread and pasta. Two minutes later they asked for to-go boxes. It wasn’t long after that incident that I saw OG advertise their eat one\take one meals. Apparently the behavior I witnessed was “normal.”

I figure if the food in their ads is the best it can possibly look… yeech!

Yeah, I often see a food commercial and think “that’s supposed to entice me???” Pretty much covers every pizza chain.

better to read these articles than to do it!

Just the thought of the quantities of pasta with one of their weaks sauces is nausea inducing for me. I love pasta, but not 3 lbs of sludge in a sitting. I’ve eaten there twice, by force, over the last 2 some years. Salad dressing was decent. 'Bout all I got.

Funny read, though. No way in hell I’d do that.

Pretty much covers every pizza chain

Sonic, DQ, and A&W too. Gawd… if you can’t make a cheeseburger look good with a food designer and pro video team, what must it be like in real life?

Yep. When you think how McDs, BK and Wendy’s actually make their food look appetizing (even when you know what it looks like IRL) it makes you wonder.

They cut her off after 3 bowls

I recall a TV documentary about our buffets. The owner of one reckoned that if folk didnt go over six plates then he was still in profit.

Two men who spent the last couple of years as regulars at an all-you-can-eat-buffet have been banned for life after the owner accused them of being too greedy.

I worked at burger king when i was a kid…always made me chuckle that the grill marks were only on one side (it went through a conveyer belt kind of oven, then get microwaved once put in bun). the advertising photography of these things is a real science!

I worked at BK as a teen for a month or two. This was before microwaves were standard equipment . . . burgers went from the conveyor oven to a “heating bin” until it was time to assemble.

Umm, wow. Never thought I would see that word on HO. If you don’t know the word, please don’t google it if anyone else can see your screen.

haha, we had the heating bin too. good job lasting a few months!

They called my workstation the “burger board” - i wasn’t specialty sandwich, fries or cash register material, but lots of mopping and parking lot clean up.

I split my time between burger board and cashier. These were the days of the brown and orange polyester uniforms and funky mushroom cap hats. A few months of walking to and from work was enough for me. I took a better job at the local pizza joint where I split time between the grill, the hoagie station and the ice cream counter. (Only the boys were allowed near the pizza ovens in those days.)

That’s a well written story. My office is very close to that Olive Garden. Walk by it all the time but I’ve never been in it but I’ve wondered what the view from that big window looking down 7th is like. I had assumed the place primarily drew the tourists visiting Times Square. Seems to be confirmed. I don’t think I have ever eaten at an Olive Garden. My team once looked into ordering takeout from them but when we saw the prices, we realized it wasn’t any bargain and that you could get better food for less. We did order from the Applebee’s on 50th. Never again. Maybe I should check it out though I might need a cleanse and go to Marea afterwards.

a local udon chain here changed the name of one of its dishes…pretty sure the name persists on some menu boards in town.