Theodore Gioa in the LA Review of Books: The Midlife Crisis of the American Restaurant Review 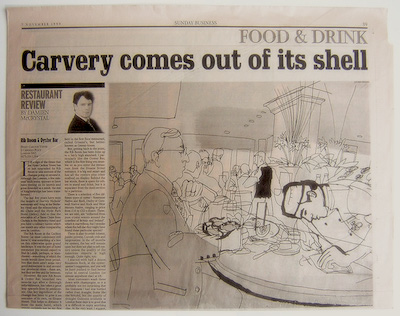 The Midlife Crisis of the American Restaurant Review - Los Angeles Review of...

Theodore Gioia samples the American restaurant review at present and offers a recipe for the future.

…
To be blunt, the traditional review is a terrible vessel for inventive prose, contrarian opinions, and nuanced arguments about the mystery and meaning of food.
…
5. Shake up the speaker

Big-city gourmets are not the only people qualified to be food writers. It’s time to break up the white-male monopoly on the genre by inviting overlooked perspectives to join the Review Page. This type of diversity includes gender and race but also encompasses region, discipline, ideals, and voice. Commission a Creole poet to eulogize their favorite gumbo. Send a naturalist to inspect a “sustainably” sourced salad. Ask a suburban Republican to review that All-American steakhouse. Pairing authors with dishes they’re uniquely qualified to discuss or dismantle — whether through personal or professional expertise — is an equation for passionate and eclectic criticism.

From the Los Angeles Review of Books:

The Midlife Crisis of the American Restaurant Review:

IN 2018, the American restaurant review officially entered its midlife crisis. A literary baby boomer, the modern review was born in 1957 when Craig Claiborne became editor of the New York Times Food Page (changing its name from the “Women’s Section”), inaugurating weekly columns, a four-star rating system, and a code of professional guidelines. Throughout the ’60s and ’70s, the rebellious teenage genre staked out a public reputation on the fire-breathing prose of Gael Greene and Mimi Sheraton. Over the ’90s, the review eased into middle age as a pillar of respectable bourgeois journalism. But in the new millennium, the dawn of foodie subculture added an element of hero worship to the profession’s public image. For the informed eater, Jonathan Gold and Ruth Reichl were less journalists than Associate Justices on the Culinary Supreme Court. However, settling into its seventh decade, the silver-haired restaurant review has stumbled into a tumultuous cultural climate — and its old-fashioned views are starting to wear thin.
…

An extract from the article - "“I don’t see the critic’s task as one of simply deciding if a food or restaurant experience is pleasing,” writes Soleil Ho, “but rather using an aesthetic evaluation of restaurants to tell stories about the connections between people, cultures, and communities.”

This, as we say in my part of the world, is complete bollocks. When that attitude inevitably reaches the UK, I will have read my last restaurant review.

I disagree with this ridiculous article. What the author fails to realize is the age of the “restaurant critic” is dead and all hail the rise of the “internet influencer” ## 100 100. I didn’t even know who Soleil Ho was until now, that’s how much impact her “social justice activism” has on me.

She needs to report on restaurants, not shame us into buying environmentally sustainable seafood or go zero-waste packaging. See, all that is done through the art of persuasion, but you gotta get the reader to read the review first. And by that, you have to talk about food. This art is lost through the #influencer. Now everyone is bombarded by pretty pictures and exclamations of euphoria, like #yummy #FOMO #hashtaghashtag. Food critics can fill that void but there are so few left that do so. The last thing I want is a writer soapboxing me to eat here to save the Australian wild life.

Then again, I’m old. I actually care about the food.

I can’t remember the last time I read a true, fact-checked, honest-to-goodness restaurant review. I think the last one was Heidi Knapp Rinella, when I was posting about her here, two years ago. I failed to update that she no longer writes regularly for the LV Journal although it seems she is still on staff.

There’s an argument to be made that reviews and criticism are two different animals. A review tells you whether something is good or not, while criticism addresses wider issues, like the ones Ho mentions. One might find reviews useful and criticism not at all. But in this age of star ratings and likes and upvotes, reviews are a lot easier to come by. So people who expect to be paid for offering their opinions might feel pressured to do more than just report that the food at Restaurant X is oversalted.

In the UK, journalists who write about restaurant meals are usually called crtics. I suppose that is to put them in the same category of journalists who write about theatre or cinema experiences. And it sounds sort of more of a profession than “reviewer”. Personally, I have not seen a difference (and don’t understand a difference) between a review and a critique of a restaurant. I do enjoy reading them though. Most will be about places in the country that I’m unlikely to visit - I’m not likely to take a two hour train journey to London to eat in a neighbourhood bistro that’s written about but I am for a Michelin 2* place. But what I do want from my critic/reviewer is entertainment.