It’s going to be a while before we can properly assess the damage that the pandemic has wrought on everyone. One heartbreaking closure during 2020 was the fall of one of the City of Angels’ best Pizzerias, the best Roman-Style Pizza around in Il Romanista. Chef-Owner Luigi Roditis had been quietly putting out stunning rectangular slices of Roman-style Pizza in a nondescript strip mall. But since a large portion of his business relied on nearby office buildings during the weekdays (and everyone was working from home), Il Romanista closed permanently.

Flash forward to 2021, and Pizzaiolo Luigi Roditis has found new business partners and opened up Roca Pizza, currently in pop-up mode at The Americana in Glendale(!). 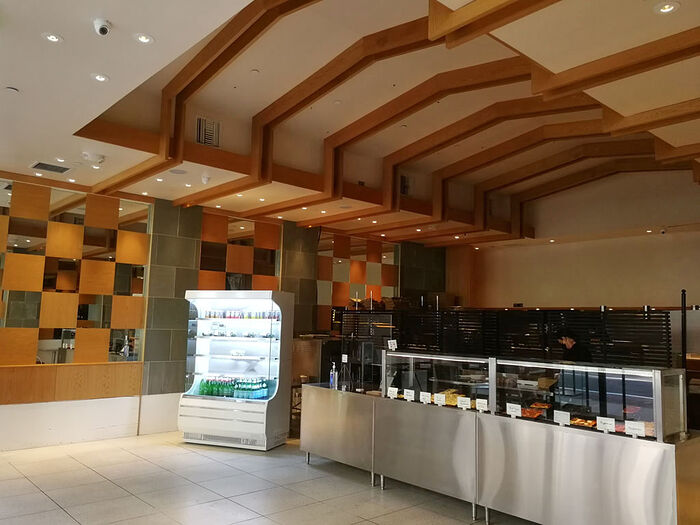 Walking into the space, and we suddenly realize this was the former space of The Tsujita Ramen (Tsujita’s largest branch in L.A.). I had no idea they also were forced to close in 2020. Sad.

There are no indoor tables setup yet, but there are outdoor tables to eat at. You’re greeted by a long display case showcasing the initial opening menu for Roca Pizza, featuring some familiar flavors from Il Romanista, but also many new flavors!

As before, you order the slices you want (or a whole sheet / whole Pizza), and they will reheat the slices to enjoy. 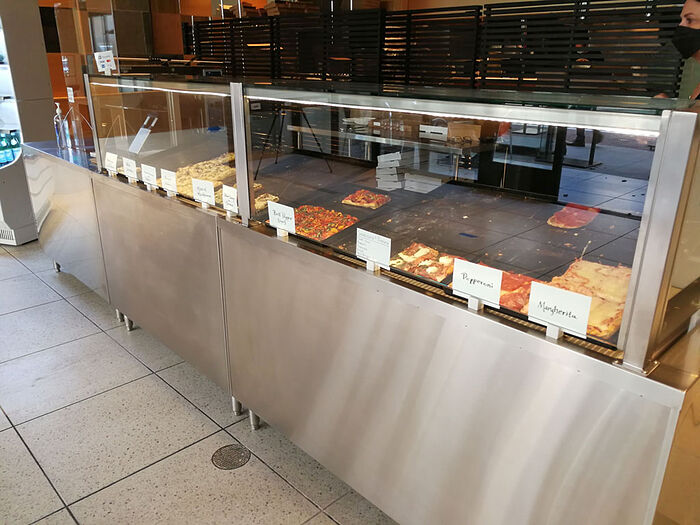 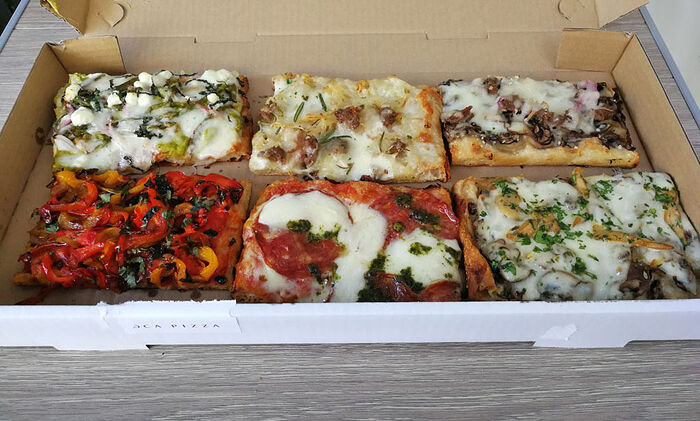 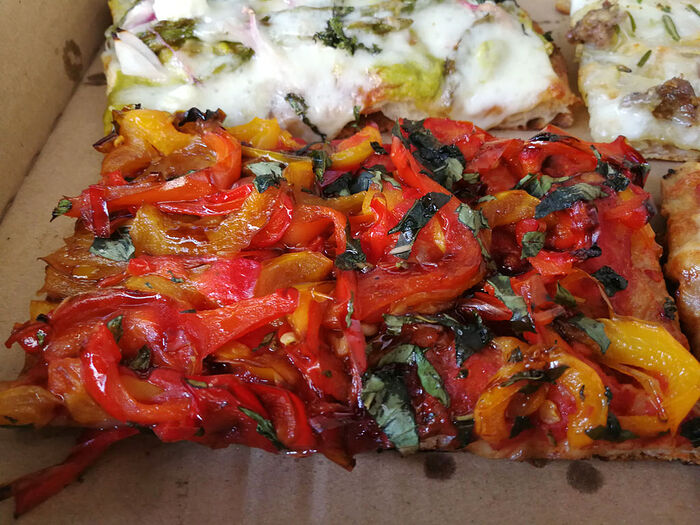 Don’t overlook this Pizza just because you see the dreaded “V” word: Folks who’ve tried Chef Luigi’s vegan offerings at Il Romanista can attest to his mastery of vegetables and meats for creating glorious Pizza flavors.

The new Bell Pepper Pizza is nothing short of spectacular! Inherently vegetal with some slight Roasted Bell Pepper sweetness, his Tomato Sauce at Roca is balanced (not too sweet, nor overly tart like some versions), and the fresh Basil, Balsamic and EVOO just meld this all together.

But then you hit the crust:

Pizzaiolo Luigi’s new Roman Pizza crust for Roca Pizza is even better than his version at Il Romanista! Chef Luigi mentions that he experimented and worked on improving his Pizza crust during the time off, and is now using an American Organic Wheat Flour and cold ferments it up to 72 hours. It is crispy-crunchy and glorious. 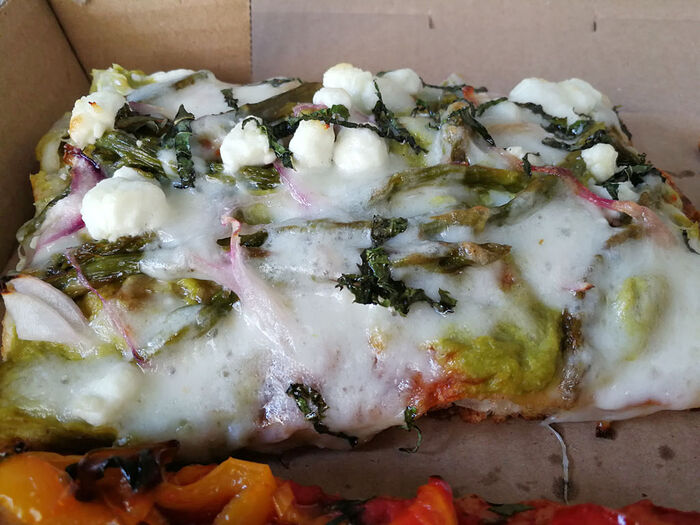 A new flavor at Roca, this is stunning: You get the immediate fragrant, pleasing Asparagus Puree and Spears, but then the creaminess from the Mozzarella and the light funk from the Laura Chenel Goat Cheese, nice bright Red Onions and Mint, and the crispy-crunchy crust. Outstanding! 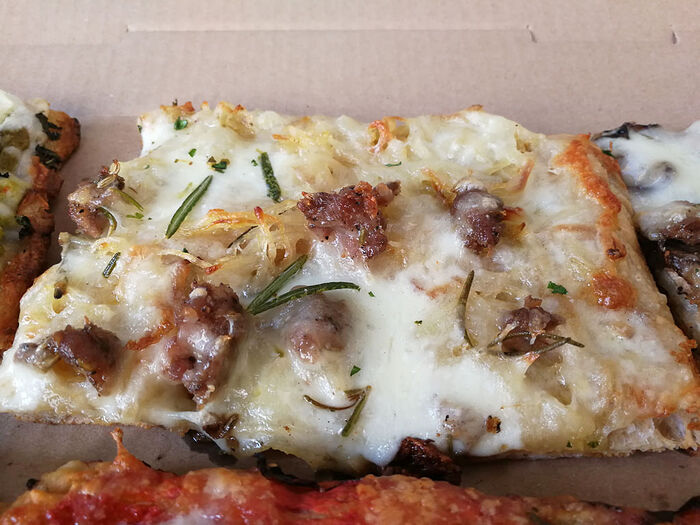 Good flavors, the Housemade Sausage is meaty, porcine and not overly salty. Nice zestiness. The Yukon Gold Potatoes do not overwhelm the Pizza (it’s easy to imagine the starchiness just sitting heavy), but it’s lovely. 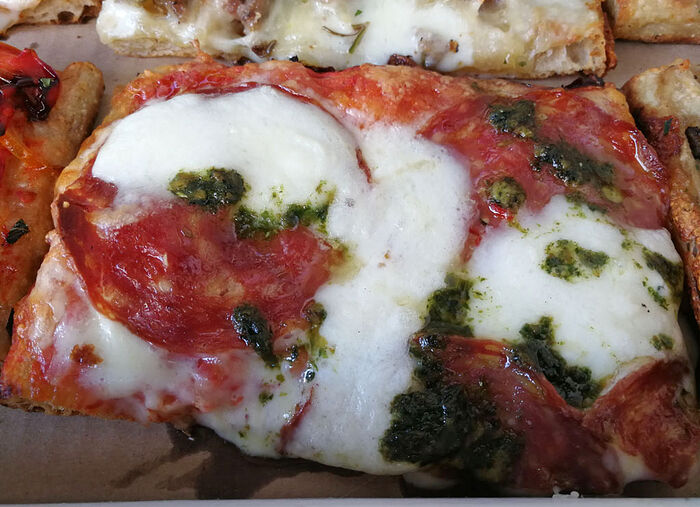 Chef Luigi’s current favorite, and with good reason: The Soppressata is legit: Deep porcine funk in each bite, real depth of flavor, and then the Basil Parmigiano Oil hits, so Spring-like and bright and then creamy, pleasing fresh Burrata, and the incredible new crunchy-crisp Pizza crust! 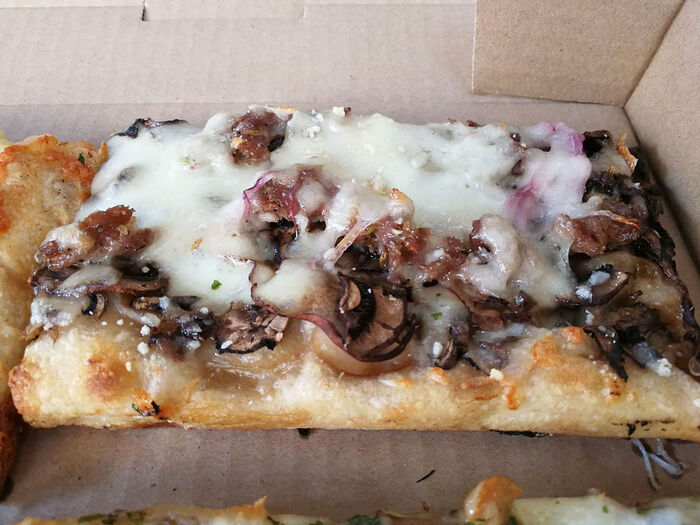 That delicious Housemade Pork Italian Sausage, meaty, not salty, savory, and deep aromatic Roasted Cremini Mushrooms and double Cheese with Red Onions and the fantastic crust. Highlight of the meal! It is so good! 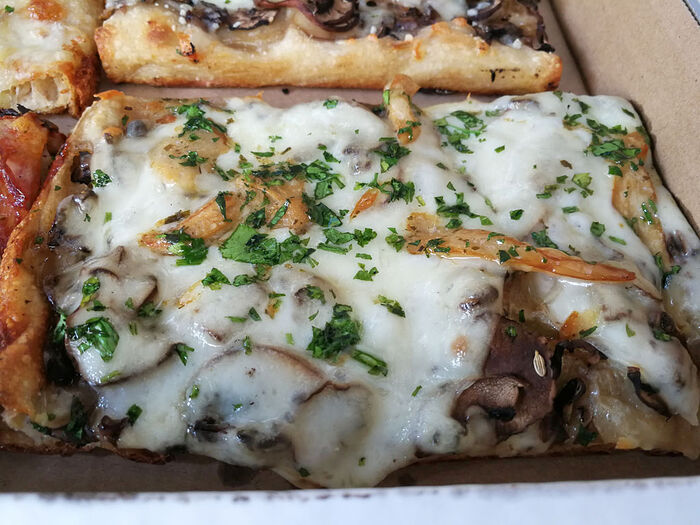 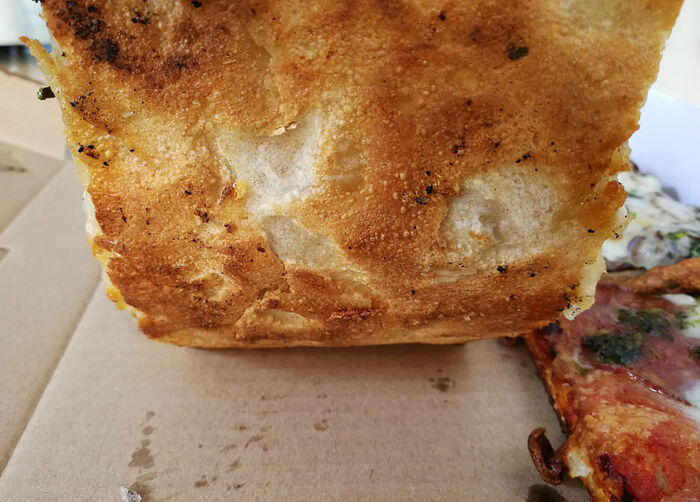 There’s no worry if Chef-Owner-Pizzaiolo Luigi Roditis still has the skills or not: His new endeavor at Roca Pizza captures and exceeds what he did at Il Romanista and delivers an even better Organic Pizza Crust. The result is the restoration of great Roman-style PIzza in L.A., and a treasure that was lost to COVID-19 is now restored.

Roca Pizza and Chef Luigi is making incredible Roman-style Pizza squares, stunning flavors, incredible crispy-crunchy crusts and interesting flavors. He mentioned that he’ll be able to keep this Roca Pizza pop-up at the Americana in Glendale if there’s enough business, so hopefully folks can stop by and support one of the great Pizzas in this region. I’m already planning a return trip.

I never made to Il Romanista, so I’m really glad this opened!

I hope you get to try it. Some amazing Roman-style Pizza!

(Also plenty of parking (for $2) at the Americana parking garage, I think it’s like 7 stories tall (like the parking structure for Hayato in Downtown LA.)

Roman-Style Pizza around in Il Romanista

Indeed, their crust is truly amazing.

Nice report! That potato sausage pizza is amazing, so glad it is available again along with others. Haven’t tried the new crust, I can only imagine it being better than before.

Indeed, their crust is truly amazing.

Thanks @ipsedixit. Thank you (and @A5KOBE @JeetKuneBao and so many others for the great recommendation in the first place).

I’m so happy Pizzaiolo Luigi is back in business!

And like @ipsedixit, thank you for the great recommendation. I hope you get to try Roca Pizza soon (when you feel up to it). I’m glad Luigi didn’t quit the business permanently and was able to find some new business partners and a new place. The new oven he ordered from Rome, Italy is supposedly the oven that many Pizzaiolos use over there, and it looked pretty neat (hand-built).

So happy for Luigi and the team. They were always very nice to all their customers and they made some of the best pizza around at Il Romanista. I worked 5 mins from Il Romanista and ate way too much pizza the year I was in El Segundo. Sad that they opened far away from me in Glendale but maybe we’ll make a trip one day.

I was here last week.

Worth noting that while it is in the old Tsujita location, but for folks who need more direction, it’s in the corner where the Sue La Table and Coffee Bean are right next to Sugarfina.

I arrived before opening at noon and got my pick of the first slices to come out. The sausage and mushrooms was great as was the soprassata and burrata. The fam enjoyed the BBQ chicken pizza. They didn’t put my sausage potato didn’t make it to my box or my check, so it looks like I’ll need to go back.

I prefer this new crust to the El Segundo. The sourdough adds a nice flavor. Pizza remains amazing.

Thanks for your recommendation to me as well!

Luigi did say he’s opening up a permanent brick & mortar location in Marina Del Rey / Westside, so hopefully that’s a bit closer? (Or if you get a chance to drive through Glendale (the Americana outdoor mall is a nice afternoon), I hope you get to try them.)

Thanks for the report back.

The Potato & Sausage is tasty (and the Roasted Bell Pepper). Hope you get to try more flavors soon.

So that should make the trip even more worth it.

We stopped by Sunday and didn’t hear about his announcement until afterwards (they had said he had a day off). I’d say the pizza was about ~75 - 80% of the quality & taste as when Luigi was in the house; still tasty.

Let’s hope Pizzaiolo Luigi lands on his feet in a better situation (maybe owning his own place again).

California Pizza Kitchen co-founder Rick Rosenfield, who recently launched the Roca Roman-style pizza pop-up at the Americana in Glendale with his wife, Esther, is expanding the concept to two bricks-and-mortar locations. The plan is for Roca to open in Palisades Village and Waterside at Marina del Rey in early 2022. The fast-casual restaurants, run by executive chef Luigi Roditis, feature al taglio (or “pizza by the cut”) pans. The menu will include squash blossom, Calabrian meatball and Amatriciana pizzas. The outposts also will have a grab-and-go section with salads and sandwiches. 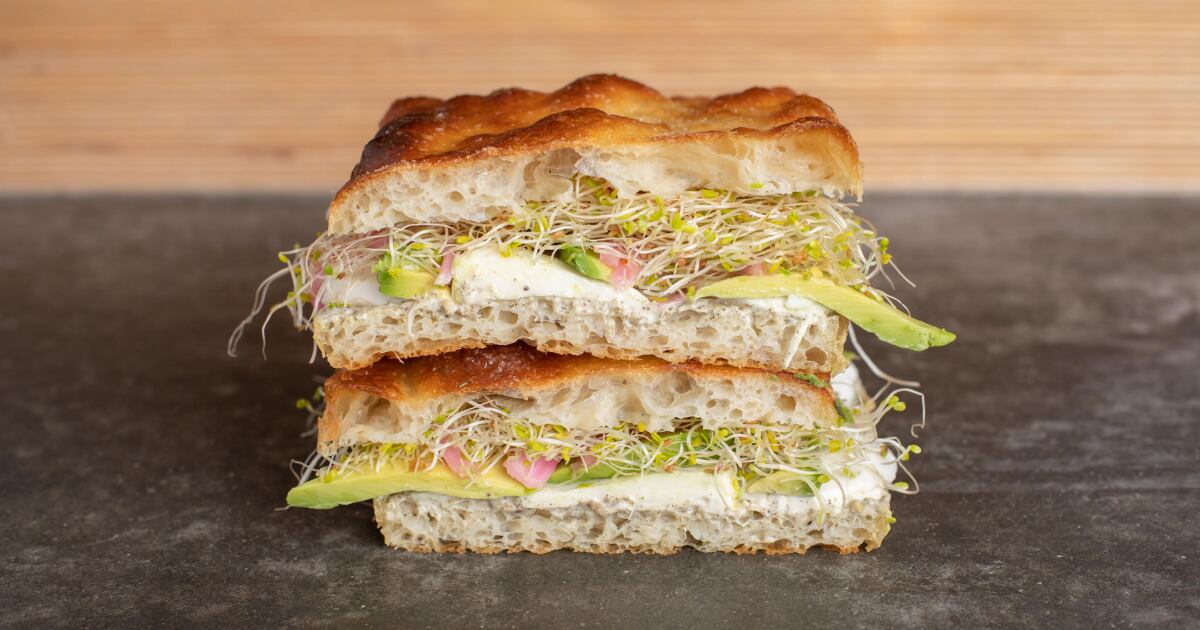 Yah it’s so sad. Luigi had told us he was so excited to expand and work on the new branches as well. And then they parted ways.