During the height of the pandemic in 2020, while reading story after story of restaurants closing down permanently, one of the eateries that we feared losing the most was Tendon Tempura Carlos Junior. There were many factors against it surviving. First, it was relatively new, and just finding its footing having barely opened a year before the pandemic hit. Second, the type of food they serve - Tempura - does not survive takeout at all (the dishes will “steam” in the to-go containers and you get a soggy mess).

When things settled down a bit, we made the effort to buy takeout from this little mom & pop shop and proceeded to eat immediately in the parking lot, to preserve the integrity of the food, but when we visited in 2020, the restaurant was empty with no orders when we visited. 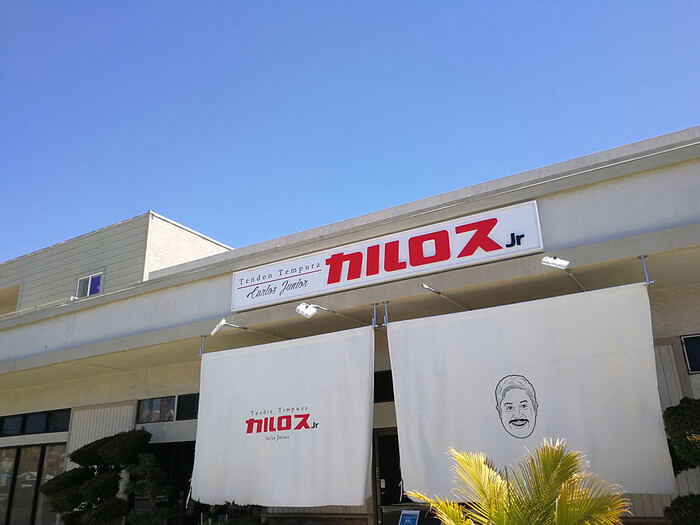 For those that may not know, Tendon Tempura Carlos Junior is a newer restaurant specializing in Tempura, the popular Japanese cuisine of Deep Fried Seafood and Vegetables, opened by Chef-Owner Carlos Pinto, Junior.

Born in Peru, he moved to Japan in his youth, fell in love with Tempura, and ended up learning how to cook it through working at the original branch of Nihonbashi Tendon Kaneko Hannosuke (日本橋 天丼 金子半之助) in Tokyo, the OG branch of the very same “Hannosuke” that Jonathan Gold wrote lovingly about in the L.A. Times a few years back. Neat.

Chef Pinto was then promoted to manager of the Torrance branch of Hannosuke when they finally opened in the U.S. And from there he decided to open his own restaurant focusing on his love. (On a side note, during our initial visits pre-pandemic, we and our friend from Tokyo were chatting up Chef Pinto. He is completely fluent in Japanese and sounds like a native Japanese.) 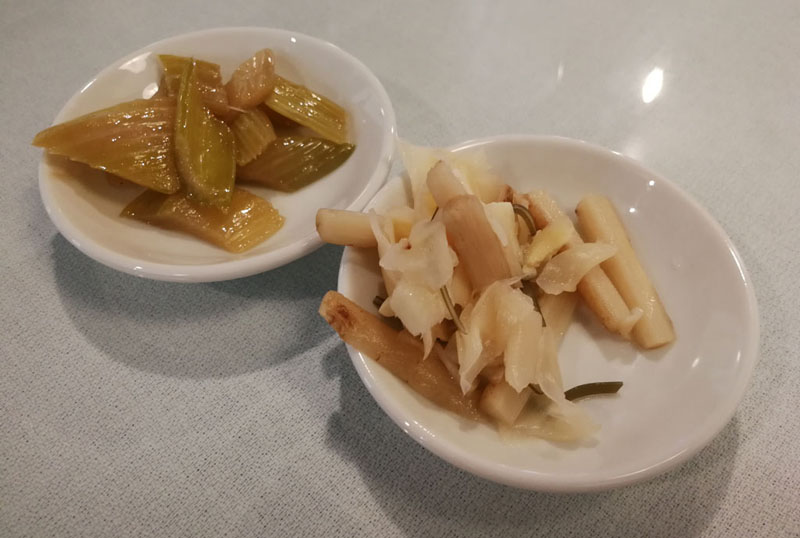 One minor upgrade Chef Pinto has done during the pandemic is upgrade their free starters. The Pickled Celery is still ridiculously good with a Sesame Oil-infused marinade. I’d order that as a starter even if it cost money.

The Pickled Ginger is now upgraded to include Pickled Gobo (Burdock Root), and it’s fantastic! Sweet ginger spice, the Gobo’s inherent earthiness actually tames the Ginger and the Ginger infuses itself nicely with the Gobo. Definitely a great bite to cleanse the palate as well, inbetween the Tempura bites.

On the wall, Chef Pinto provides a funny informational comic strip to show folks how to best enjoy Tendon (Tempura Bowls) and Tempura Plates at his restaurant: 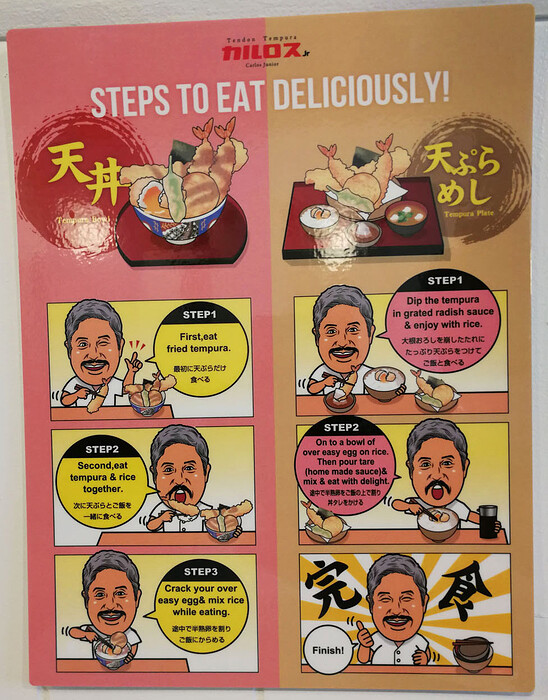 At its core, the restaurant focuses on 2 main categories: Tendon (short for “Tempura Don” (or Tempura Bowls), and Tempura Plates. It sounds similar, but the preparation and Sauces used are different.

However, during the pandemic, one major influence appeared (probably for survival): Chef Pinto now has 2 new sections, one for Appetizers (like Ikura Bowl) and Sushi Rolls.

I don’t blame the restaurant, as these items were probably the key to their survival during 2020, as making California Rolls, Spicy Tuna / Spicy Salmon Rolls are much better items for takeout than Tempura. 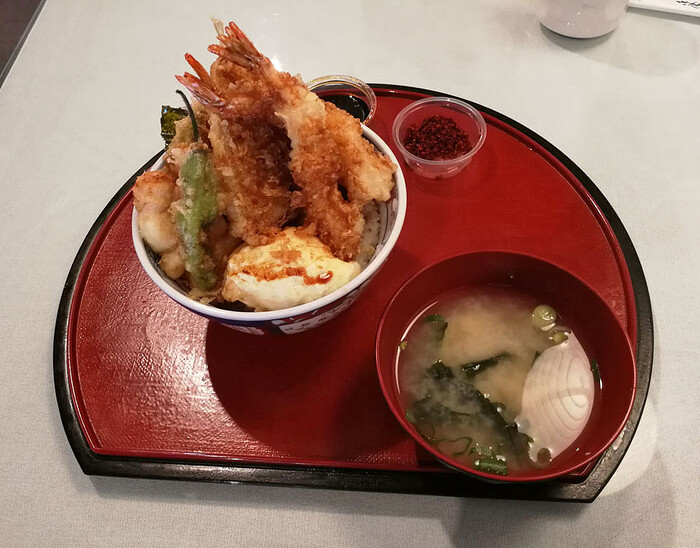 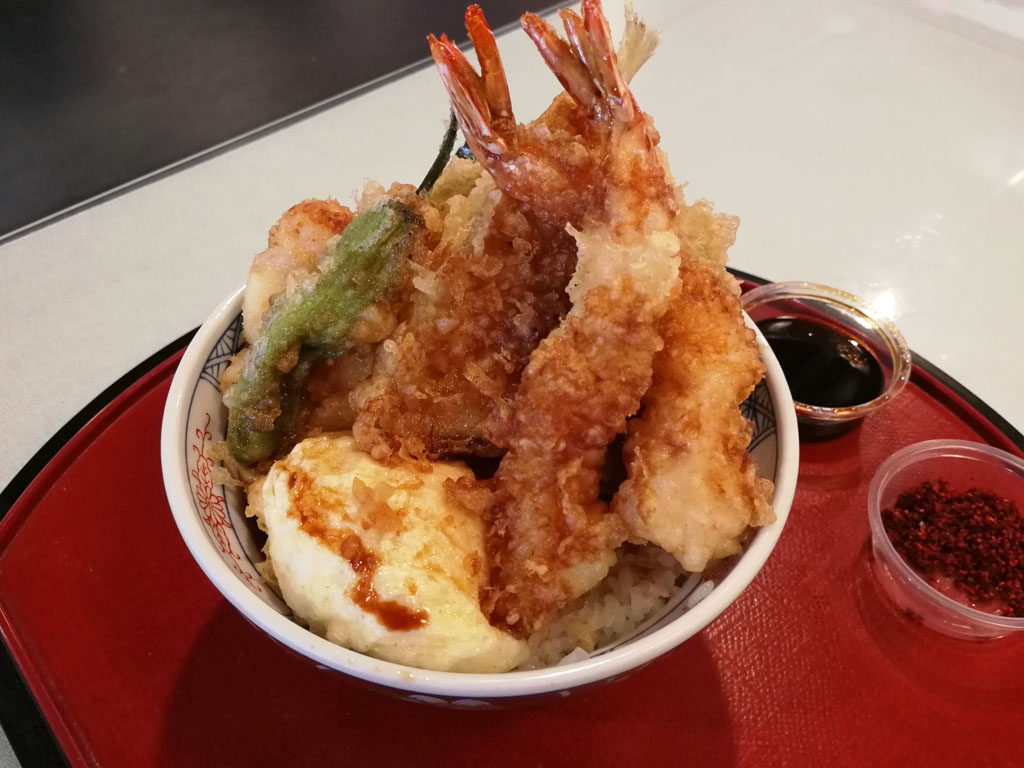 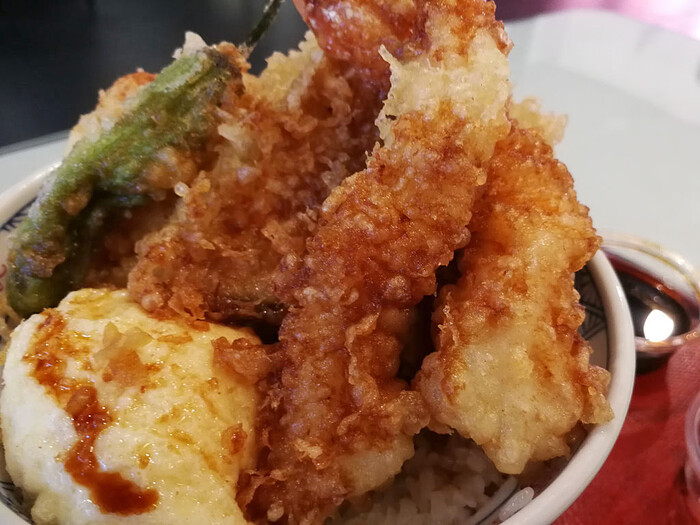 Taking a bite: The Koromo (Batter) is crispy-crunchy, it doesn’t taste overly greasy at all, and their Housemade Tendon Sauce (a sweet Soy Sauce base) is a fantastic pairing here.

The Tempura Shrimp is fresh and meaty, and is greatly complemented by the savory-sweet Tendon Sauce. 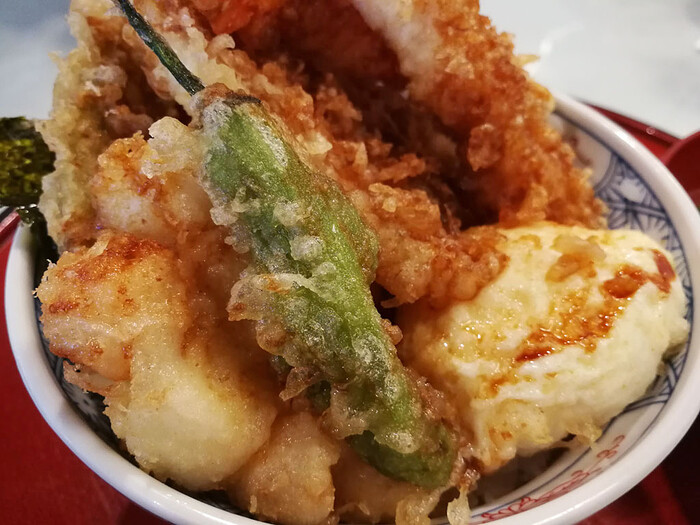 The other ingredients were all excellently fried, and retained a light crunchiness. 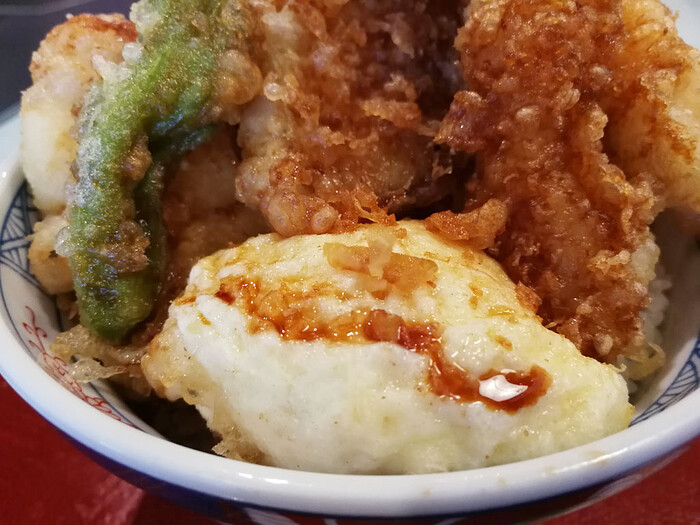 As instructed, after enjoying partway through your Tendon, make sure you break up the Deep Fried Half Boiled Egg and mix it up with the rest of your Rice Bowl (and the Tendon Sauce already in it). Delicious! 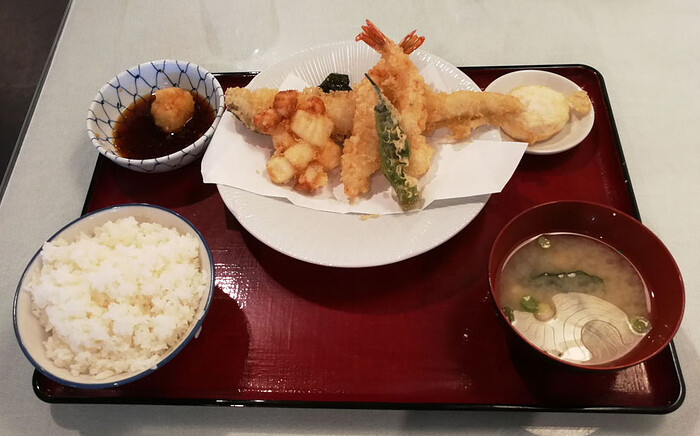 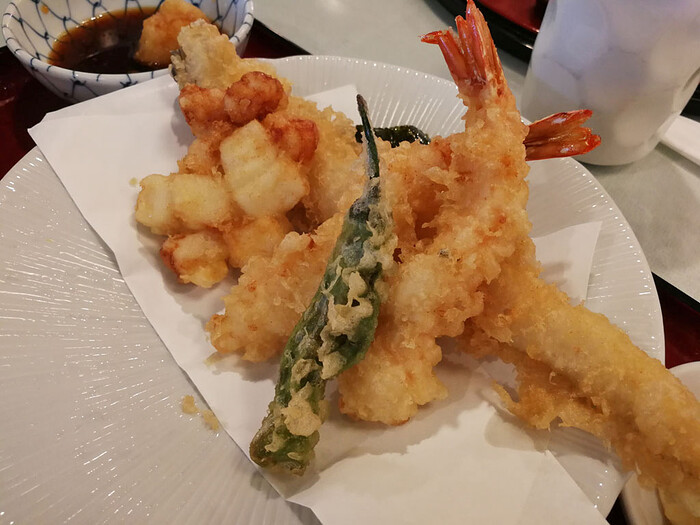 Their Tempura Plates present the deep fried items separately from the Rice, and is served with the traditional Tentsuyu (Tempura Dipping Sauce) that is not sweet like the Tendon Sauce, served with Grated Daikon Radish. It’s a different way to enjoy some great Tempura. 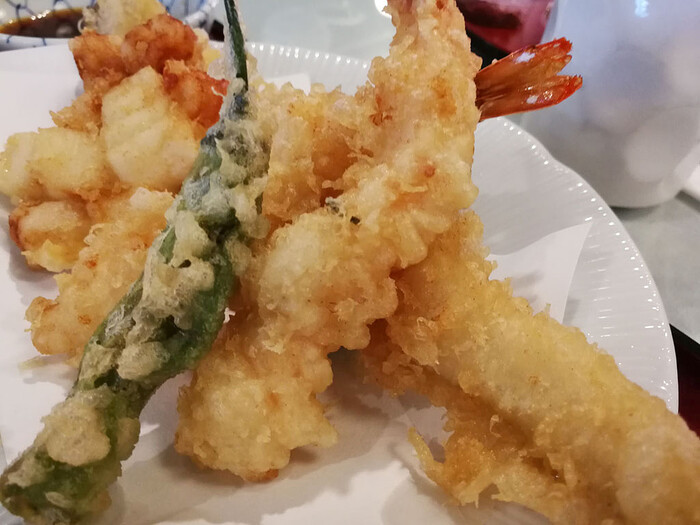 The Tempura Shrimp is as delicious as in the Tempura Bowl. Crisp-crunch, fresh Shrimp. The Tempura Dipping Sauce gives it a more savory edge and Chef Pinto hasn’t missed a beat during the pandemic slowdown. 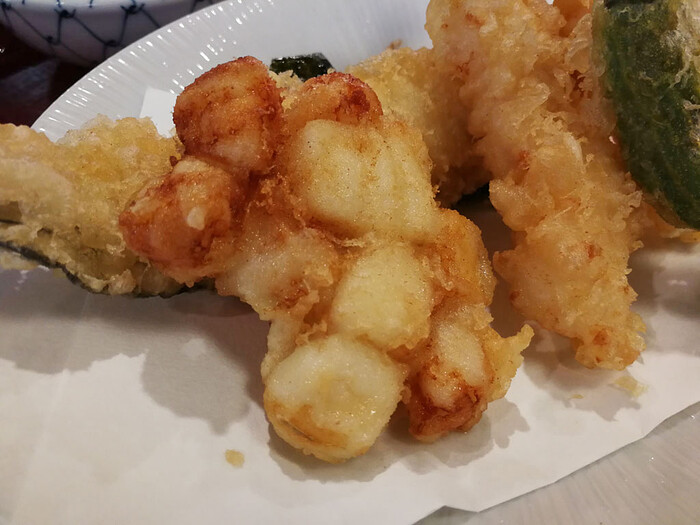 One major improvement is with his Kakiage (Mixed Seafood Tempura). Tendon Tempura Carlos Junior’s version is a mix of Scallops and Squid. The big change is that the Kakiage retains some crispiness and holds its form much better!

Originally, before the pandemic, the Kakiage was actually too fragile and would fall apart and the batter didn’t cling that well. This is a nice improvement. 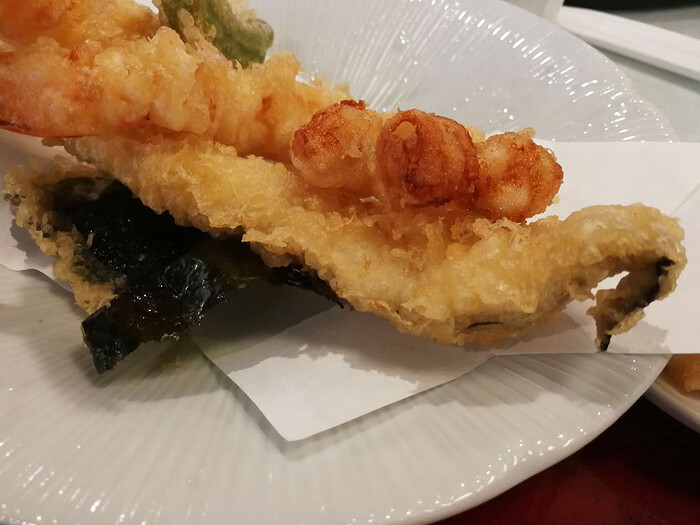 The highlight of the Premium Tempura set is the Anago (Sea Eel) Tempura, which is perfectly fried. The Eel is moist, flavorful and tender, probably the most delicate piece in the whole set and so delicious! 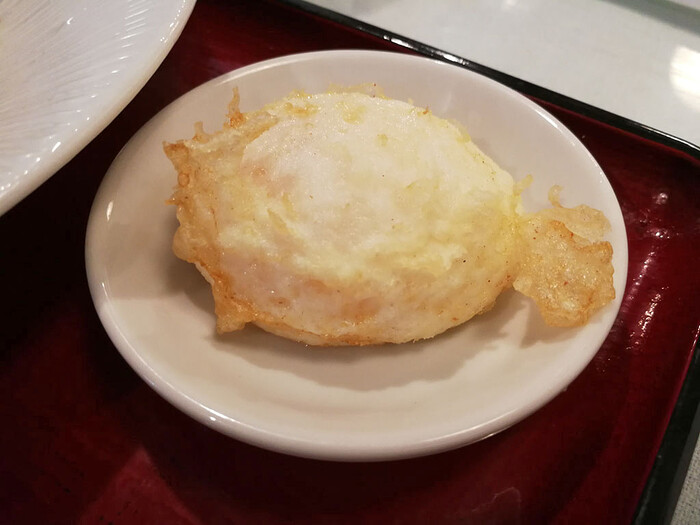 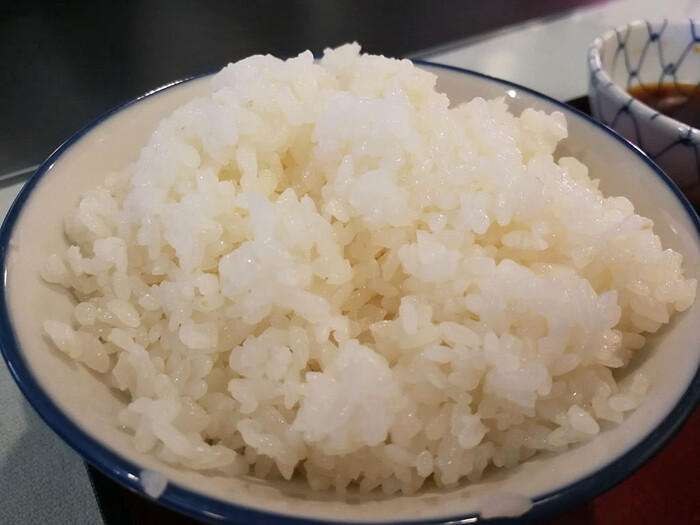 The Fried Half Boiled Egg is perfectly cooked, and the Steamed Rice needs to be called out for its excellence: It is toothsome, having good structure and sheen. It reflects the pride a good Japanese restaurant has in making the most basic item well. Breaking the Egg over the rice and mixing it up (and adding a bit of the Tempura Sauce) is delicious!

Look at the color of the Egg Yolk: 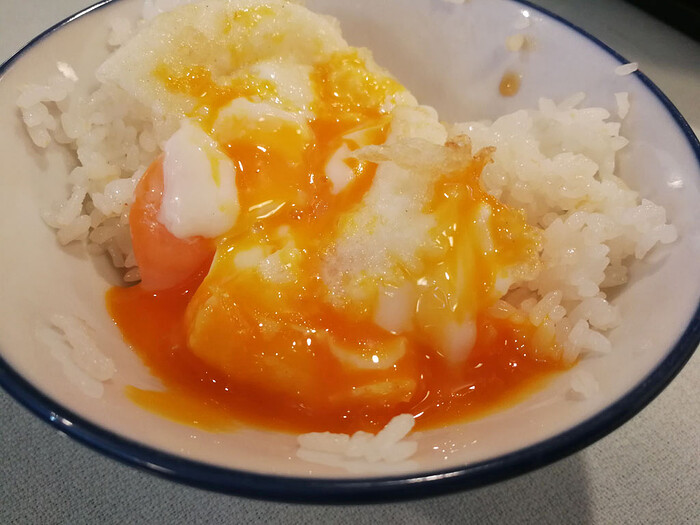 The Shishito Pepper and Seaweed Tempura pieces are also crunchy and quite tasty. 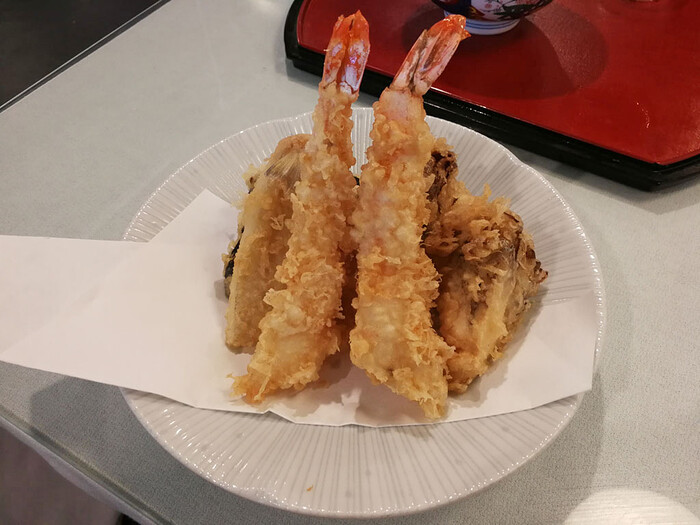 There are also some key Tempura pieces that are not included in any Tempura set, available as individual orders (by the piece). From our past visits, we’ve honed in on the standout items and wanted to see how they compared to before. 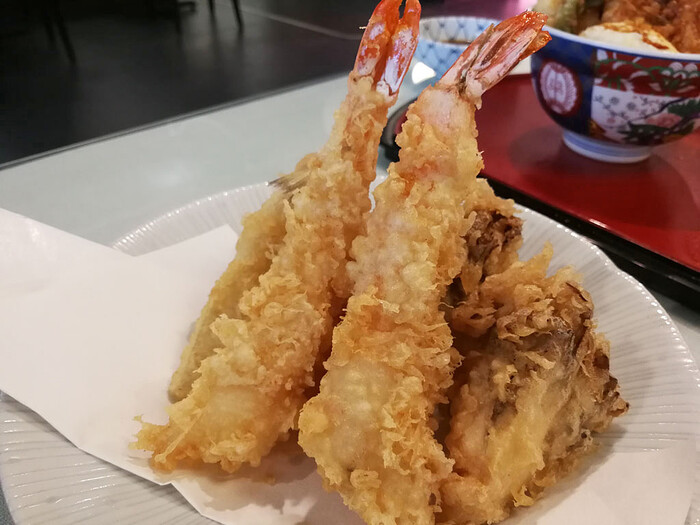 This isn’t just a minor step up from the regular Shrimp Tempura included in the various sets. The Jumbo Shrimp Tempura is worth your while to order, as you’re treated to a totally different profile: It’s plumper, meatier, but tender, also lightly (inherently) sweet. It is fantastic! 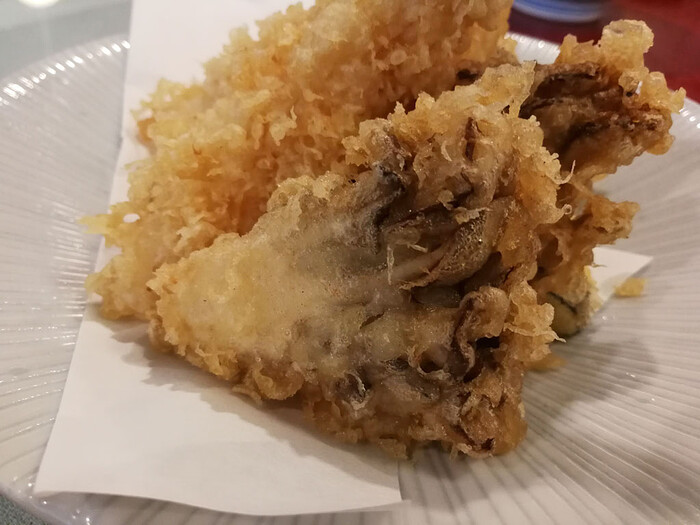 Perhaps even better than the Jumbo Shrimp is the fantastic Maitake Mushroom Tempura! Nicely crunchy on the exterior, as you bite into it, it gives way to a super tender, soft, deeply umami burst of Maitake Mushroom goodness!

I think I like this piece more than the Jumbo Shrimp. 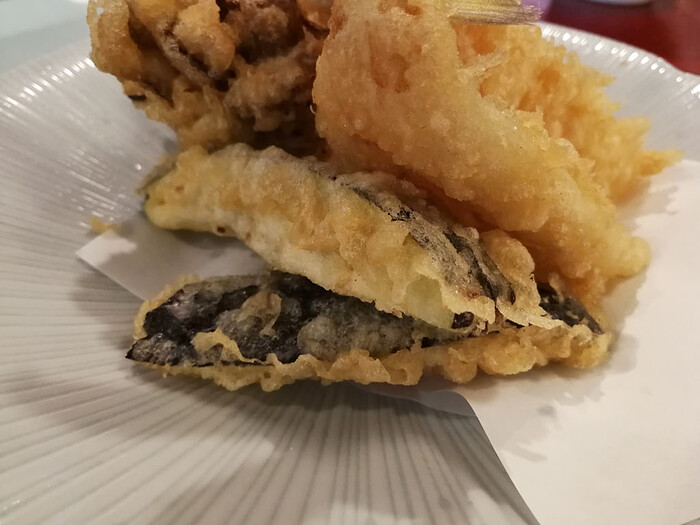 Their Nasu (Eggplant) Tempura is also very good. There’s a nice crunch and then a soft, vegetal center. 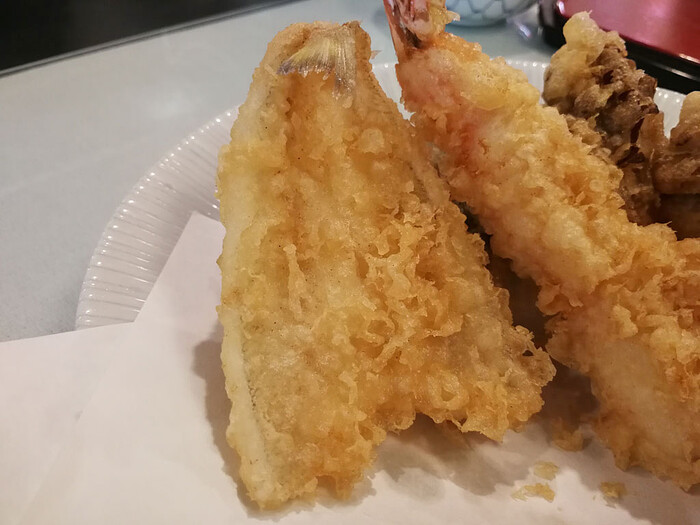 The White Fish Tempura is also quite good. While quite thin, there is enough moist White Fish meat to hold up to the batter.

We’re glad to see Tendon Tempura Carlos Junior survive 2020, and with the partial re-opening phase in the county, enjoying Tempura (at socially distanced tables) is a possibility again. Chef Carlos Pinto, Jr. continues to deliver great Tempura that is more of the rustic variety. It’s crunchier than the version at nearby Tempura specialist Inaba, but it’s also perfect to hold up in Tendons (or Tempura Bowls), as the Tendon Sauce can quickly disintegrate a weaker batter. Here, the Tempura Bowls are a fantastic treat and each item retains its crunchiness with the great Housemade Sauce.

Their Tempura Plates are also another highlight, and it’s worth springing the extra $5 for the fantastic Anago (Sea Eel) Tempura in the Premium Tempura Plate (over the Special Tempura Plate). The Side Order Tempura Menu is also worth considering for various items that are not found in any of the sets, like the standout Jumbo Shrimp, Maitake Mushroom and Eggplant Tempura pieces.

And in one more surprising update, Chef Pinto has decided to expand his Sake Menu during the pandemic (now that we’re slowly coming out of it?), with some major additions like Born - Dreams Come True - Junmai Daiginjo Sake, which he’s selling for only $180 for the bottle(!).

Regardless, we have a great Tempura Bowl Specialist alive and kicking and still delivering some delicious Tempura in 2021.

This is great news they are back at it. I do love their tempura nori, I always order a few pieces extra. Thanks for the report and pictures.

Dammit chowseeker . Once again I wanted to jump through the phone to taste the food you photographed with your ringside description.

Yes, I love the tempura nori as well!

I tried getting that Saba Toro at Wadatsumi but they said they don’t serve it for lunch.

I’ll have to try again during a dinner visit.

Don’ t think I had ever had it until last night (when I went for the first time) and thought it was the best bite!

FYI: there is no outdoor seating at dinner. The only seat every other table, and all customers were eating quietly, thankfully. Just as a heads up for those who were hoping to sit outside.

Oh glad you enjoyed the meal.

Tables: Oh, interesting. When we went for lunch, they had a few tables outside (back parking lot), but maybe because they don’t have heat lamps (and perhaps no outdoor lighting?) they only had indoor spaced tables?

Yes, loved the nori. We only got one combo set each b/c we went in shortly b/f closing. I REALLY liked the mixed seafood and wish I had done an a la carte of the jumbo shrimp (which is probably what I’ve considered "normal’ size for shrimp tempura…

We were thinking of a bang-bang w/ Torihei, but the outdoor seating looked SUPER tight this past Sat evening. And Wadatsumi was already closed. ::sigh::

The nori really is a thing of beauty, such an amazing bite. Thanks for the report, I may be heading here this coming weekend as the nori is now fully ingrained in my subconscious.

The Fried Half Boiled Egg is perfectly cooked, and the Steamed Rice needs to be called out for its excellence: It is toothsome, having good structure and sheen. It reflects the pride a good Japanese restaurant has in making the most basic item well. Breaking the Egg over the rice and mixing it up (and adding a bit of the Tempura Sauce) is delicious!

Look at the color of the Egg Yolk: 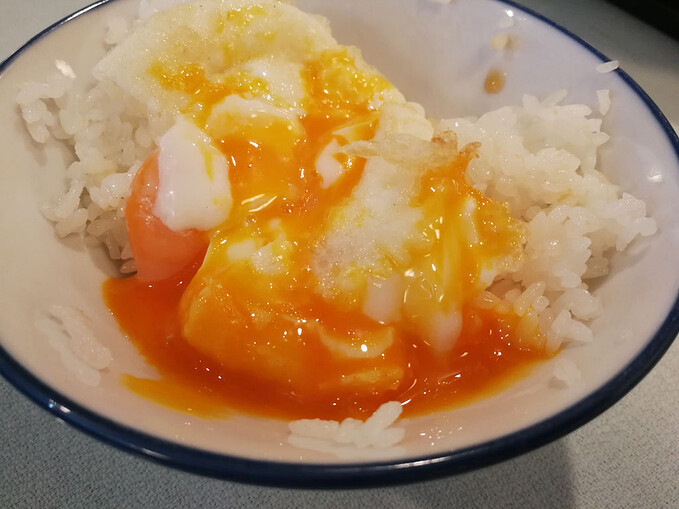 I think I need to do this tonight for dinner.

Posting the Sake Menu for reference. If anyone has recommendations, please let me know. 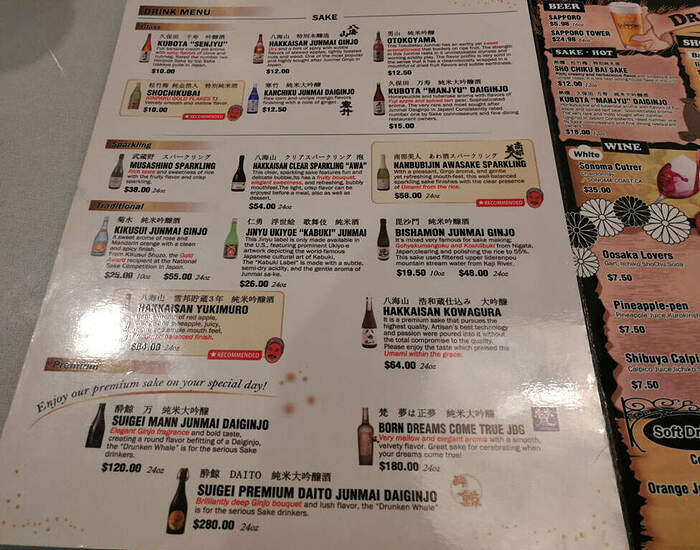