The Philly Cheesesteak: What is it and where's the best?

I’ve only tried about half of these places, but he is spot on regarding the Pat’s-Geno’s tourist trap feud. They’re both godawful, but visitors insist on trying them. The author misses out on some great neighborhood spots, but for the most part I can’t argue with his picks. And as a NE Philly girl, I agree that Joe’s (always known to me by its previous name . . . but then I’m old and never realized the previous name was a pejorative) and Steve’s (a post bar party spot) are really good.

And I’m definitely with him on the standard cheesesteak: steak, American cheese and fried onions on a roll that’s crusty on the outside and soft on the inside. However, he is flat out wrong to suggest Whiz is an acceptable alternative. Provolone yes.

Since I’ve moved to the burbs I’ve discovered three spots that make excellent cheesesteaks–one that uses mozz that is quite good.

I tried a place called Charlie’s Roast Pork in South Philly yesterday. They’ve only been around since 2019.

I was completely blown away. I had one with Whiz and fried onions and it may have been the best steak I’ve ever had; although I still need to try Angelo’s on south 9th Street. The seeded roll was perfect, the chopped - but not too finely chopped - meat was well-seasoned and coated with the Whiz and the onions added nicely to the flavor. They may be my new favorite.

The guru on Philadelphia area cheese steaks is Barry Zuckerman, who blogs at https://bzmaestroeats.com/author/bzmaestro/ He also blogs on other stuff.

Interesting, really dislike Liscio bread. to me a gummy texture. As a result never use Primo’s either

Wow, nice to know I’m not the only one in the area that doesn’t get the Primo’s love. 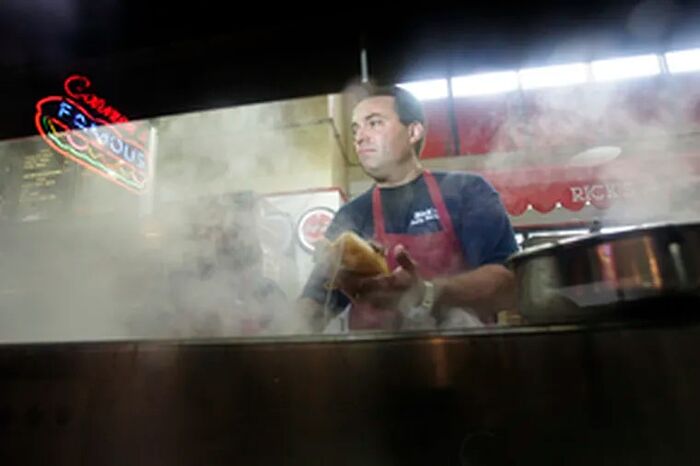 Rick Olivieri, a scion of the Philly cheesesteak family, has died at 57

Mr. Olivieri, who ran a stand at Reading Terminal Market for more than a quarter-century, fought a 10-year battle with early-onset frontotemporal dementia.

Fun thread. I love cheesesteaks. I have lived in Philly and been back, but I have been in Texas for many years. Here in Austin Delaware Sub makes the best I have found. I have developed a very tasty Texas quirk. Try pickled jalapeños on your next one!

Jalapeños — I can see that

What a shame! So young.

This is a long thread but not sure I saw a mention of Cleavers in Center City. It’s very good!

Hi John – thanks for alerting me to the Zuckerman blog, it’s excellent! As is yours of course.