I went to the Oyster Bar inside the Palace Station Hotel and Casino for an early lunch. Palace Station is a casino a bit off the strip. The Oyster Bar is quite small with only 18 seats, and there is apparently often a long wait for a seat. It’s open 24/7. I got there a little before 11am and only had to wait about half an hour. I’d read that it’s easier to get a seat in the morning.

I went to the Oyster Bar to try a pan roast, which is kind of a creamy seafood stew with tomatoes. There are a bunch of places that serve pan roasts in Vegas. I think this was the first one I’ve had though. I Googled around for “pan roast” and there are references a “pan roast” with NYC origins which is also kind of a creamy seafood stew, but that one has oysters and looks a bit different. This style of pan roast may be a Vegas thing.

The pan roasts and some other dishes like the gumbo at the Oyster Bar are made in these interesting looking pot contraptions that are apparently heated by steam power and attached to something that looks like a pipe. Once the contents are cooked they are tipped over into the serving bowl.

I started with a Bloody Mary with tequila ($10) which was good and strong. It was spicy and had a generous amount of booze, which can be vodka or tequila. Came with a large shrimp! 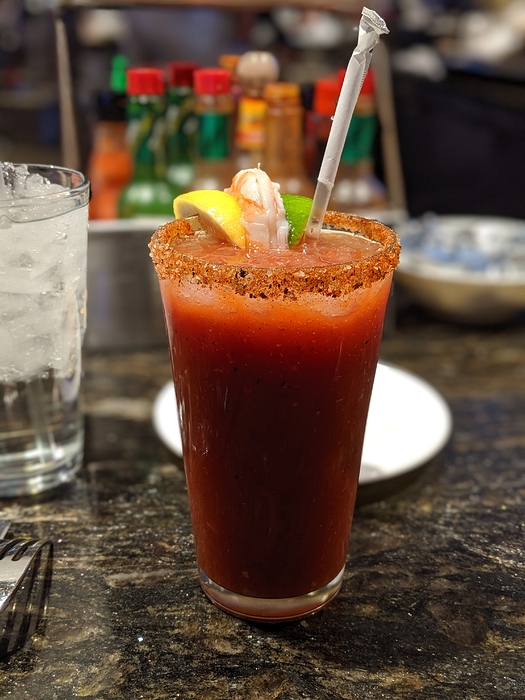 Then I had the combo pan roast ($24.99) which has shrimp, crab, and lobster. I had wait awhile for this as there’s only one person manning the pans. This was quite good and also quite large. It tasted like a chunky seafood bisque with tomato. A good amount of shellfish. I think the shellfish could have been cooked a touch less. Very rich and creamy sauce. It’s finished with a little bit of brandy which was a nice touch to help cut through the fat. They ask you how spicy you want it from a scale from 0 to 10. I chose 3 which had a hint of heat only. It comes with a scoop of rice which was good to soak up some of the richness. The sourdough roll provided also was good to mop up the sauce with. 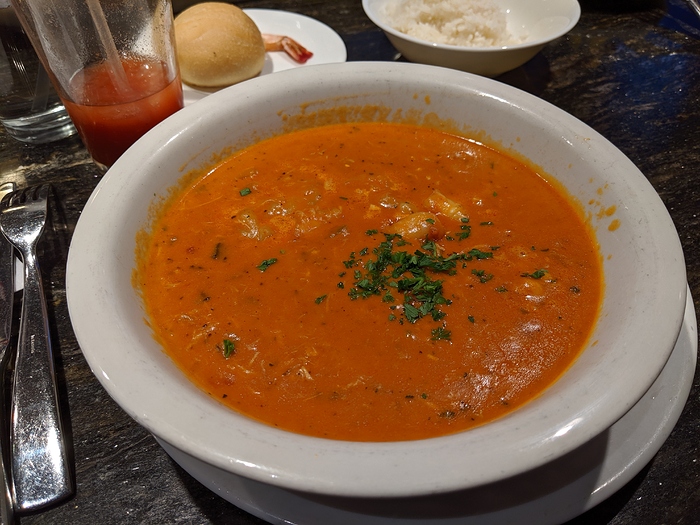 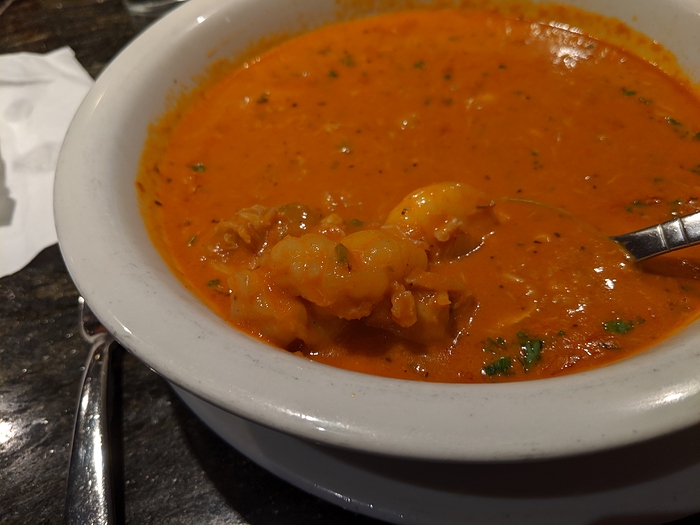 Good meal. I enjoyed the pan roast but maybe wouldn’t wait an hour for it. 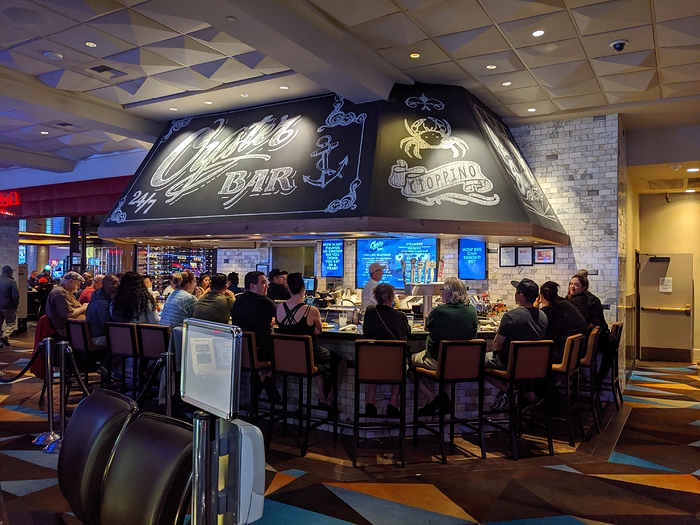 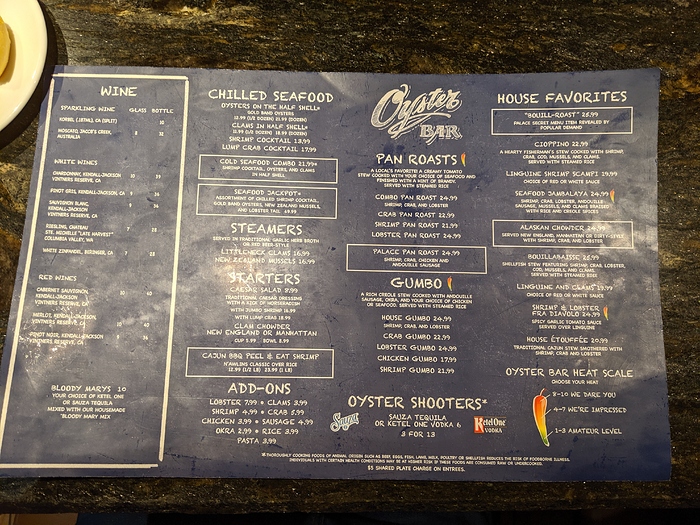 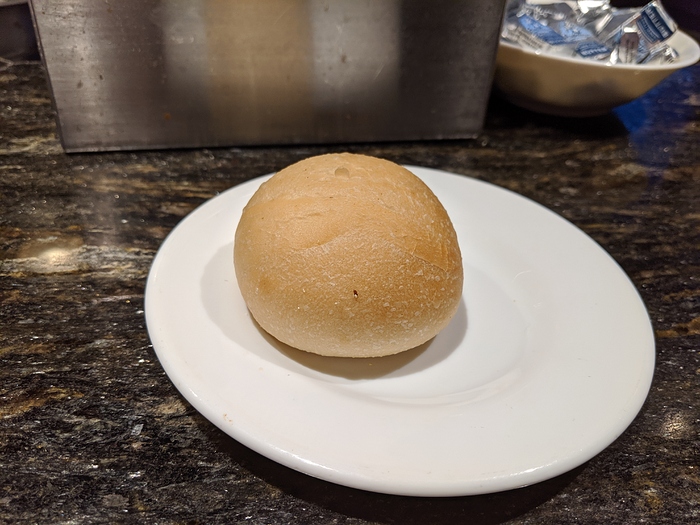 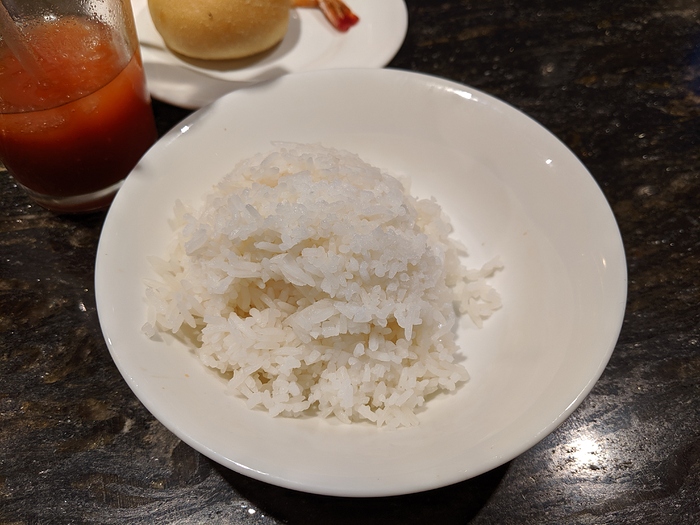 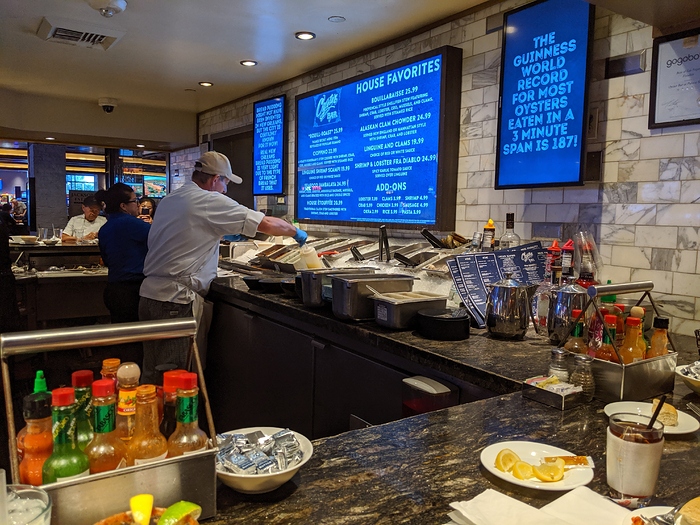 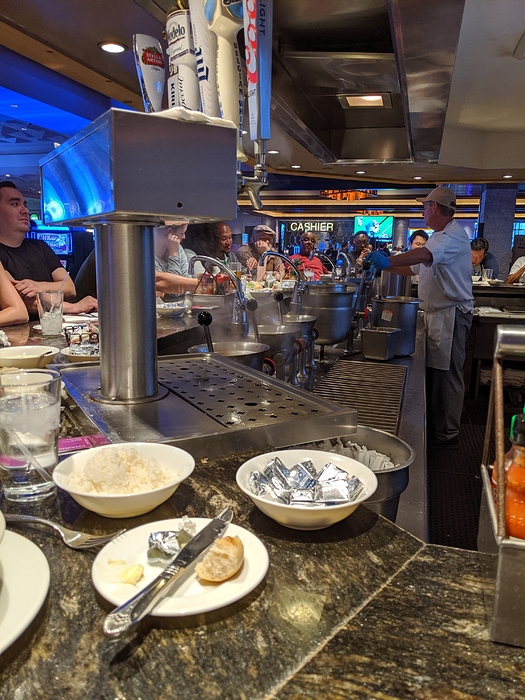 My husband is there now, but he wouldn’t go for oysters. Me? I’m ready to take a stab at that Guiness record. I think we’d both like the “pan roast” , although I I would not have guessed seafood from the name.

Me? I’m ready to take a stab at that Guiness record.

I like oysters but I think after the couple dozen or so I might be done with them for awhile.

I think we’d both like the “pan roast” , although I I would not have guessed seafood from the name.

Same here, “pan roast” sounded like one of those sizzling meat plates to me.

These are also a big thing in Reno, if your travels ever take you there. Most especially at John Asquaga’s Nugget in Reno/Sparks. They make straight up oyster ones or combination ones. Loved them both. They also had a great selection of oysters on the half shell. The resto inside the casino BTW is John’s Oyster Bar.

These are also a big thing in Reno

Yes, pan roasts steamed in the same contraptions (cooking vessels) ?the OP mentioned. So, so good. I have no idea where you might find the closest ones to you, as we’ve only ever had them or seen them when we lived in Reno.

Do you live in Sacto? Our oldest lived there for about 8 years, I’ll ask her if she saw any there.

Interesting - To me a “pan roast” at an Oyster Bar conjures up visions of shell on oysters roasted over hot coals with various sauces. Anyhoo, that Bloody Mary looks like it’s right up my alley🙂

Do you live in Sacto?

No, but it’s probably my nearest “metro”. I’m about halfway between there and San Francisco, but this doesn’t seem like a Bay Area thing.

I had a thought that you may want to research some of the casinos in the area to see if they have an oyster bar. Also you might try checking into some old school steakhouses that serve seafood.
Hmmm, wondering if the Firehouse in old town Sac may have them. They do have excellent food there. Good luck in your search!

Thank you! I’ll keep an eye out. I’ll be keeping an eye out for recipes too.