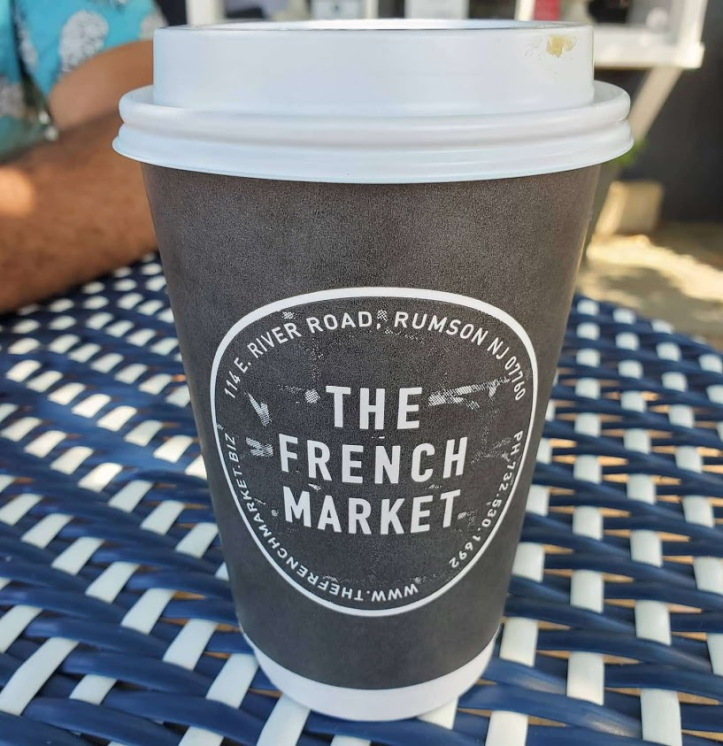 I am glad that our first time eating out since March (in New Jersey, anyway) was a good one. The French Market in Rumson had been on my radar for a while. After seeing a friend of mine eat there a few days ago and a positive report on both the food and outdoor seating, I figured it was finally time for Justin and I to give it a try. It was a beautiful, breezy afternoon when we pulled up. There were only four or five tables, but they were socially distanced. We went inside to place our order, and there was a steady flow of customers for the duration of our visit. 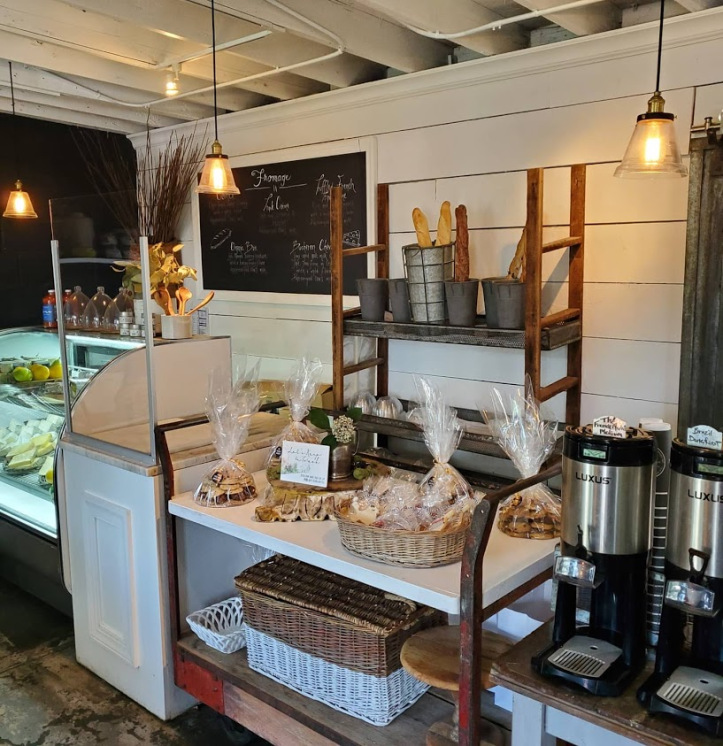 As someone who could live on sandwiches, I had a hard time deciding what to order. Their menu is an extensive list of French cafe classics, including sandwiches served on baguettes, croissants, and several other artisan breads such as Asiago or Kalamata Olive. There are also omelettes, crepes, salads, grain bowls and cheese plates. I ended up deciding on La Saucisson, which was French dry sausage, butter, and cornichons on a baguette, while Justin chose La Figue: Parisian Ham, brie, and fig jam.

We then headed outside to wait for a table and luckily someone got up within 10 minutes so we were able to sit. The wait for our two sandwiches was on the longer side due to how busy they were, but our table in the shade on this beautiful day allowed us to relax. I had a house blend coffee. Justin grabbed a bottle of French pink lemonade. When our food was brought out to us, we were thanked for waiting and also given two chocolate croissants on the house. While we did save these for later, this was a nice gesture that we certainly were not expecting (oh, and the croissants were great, by the way). 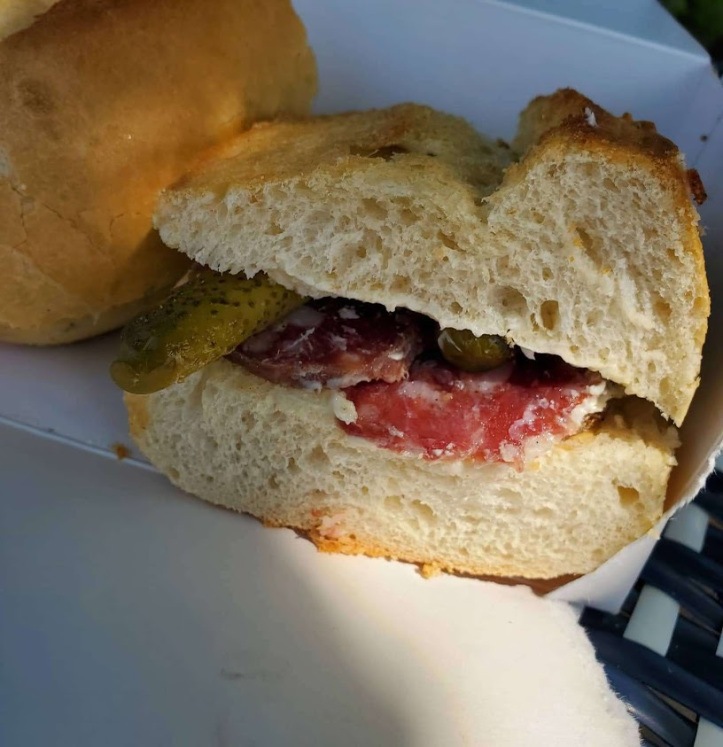 My La Saucisson was everything that I hoped for. The baguette appeared freshly baked and was beautifully crusty. I could have eaten this with butter alone and been content. But there was the French dry sausage, adding a savory chewiness that would be perfectly complimented by the pickled crunch of the cornichons and creaminess of the butter. Just three ingredients provided a range of flavors and textures. Meanwhile, Justin loved everything about his sandwich. The ham was actual ham, there was a large amount of brie, and the jam was sweet. Just like with mine, everything pulled together to act as one. 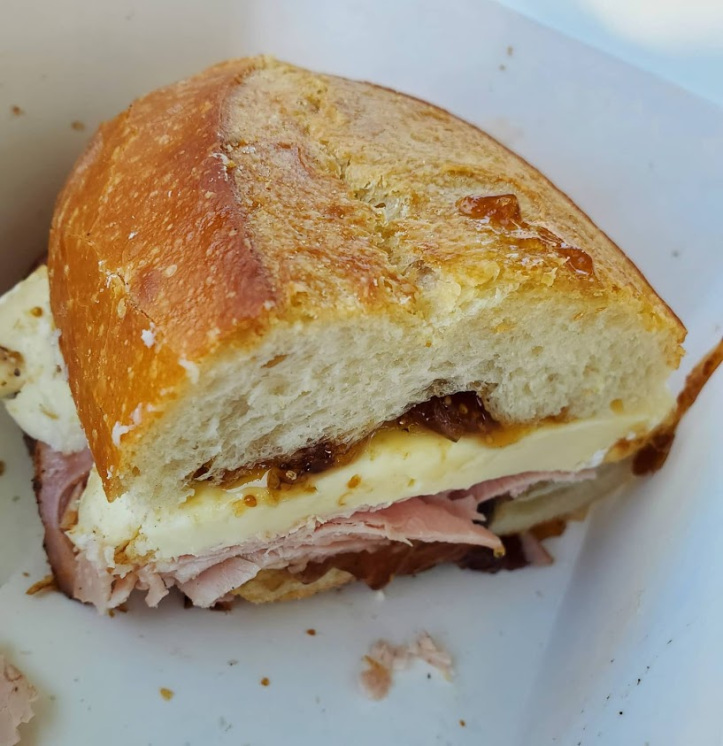 The inside of The French Market will help transport you momentarily to France. It is tiny, but it is cute, and the display of breads and confections are enough to tantalize anyone’s palate. They even have a small home and garden area in the back with additional items for sale. In a pre-COVID world, it would have been nice to have lunch in that spot, but were were more than satisfied with their set-up outside. With so many options on the menu, I would like to try more (though it would be hard to not order this same sandwich again). I am going to give them 4 out of 5 stars , which is top-of-the-line for a lunch spot such as this. Great job to all involved– their attention to detail and quality of ingredients is commendable.

The French Market is located at 114 East River Road in Rumson, NJ. 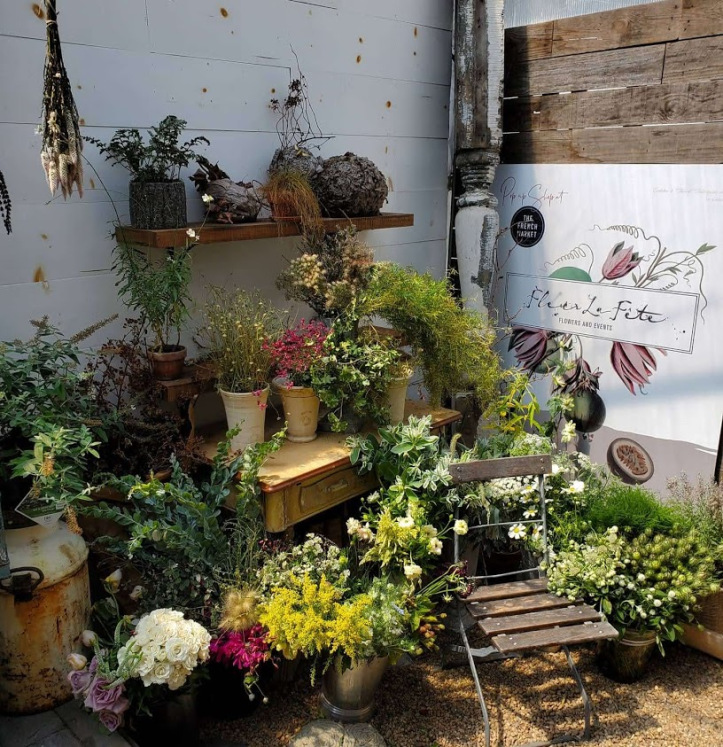