The Death of the Avocado?

[The Avocado is Overcado: How #eatclean Turned it Into a Cliche][1]
[1]: http://www.theguardian.com/fashion/2015/oct/05/the-avocado-is-overcado-how-culture-caught-up-with-fashion

One of my favorite childhood memories is visiting my paternal grandparents in Anaheim. Not only did we get to go to Disneyland (my aunt and uncle both worked there, so free tickets and such!), but my grandparents had a mature avocado tree in their backyard.

Each morning, for breakfast, I’d go out with my grandfather: he’d lift me up and I’d select the perfect (to my uneducated touch) avocado. Then back inside, where my grandmother would cut it open and place the slivers on perfectly toasted bread. A sprinkling of Lawry’s Seasoned Salt and I was in heaven.

I still love avocados - eaten plain with a spoon scooping out the flesh from the shell, homemade guacamole (very “pure” - avocado, bit of diced onion, maybe a bit of diced tomato, sprinkling of salt, and a squeeze of fresh lemon or lime), in an omelet, in a salad…I could go on for paragraphs.

I was thrilled when avocados started showing up on menus - either as a feature or an add-on to dishes. Their creamy richness always appealed to me. Somehow I missed out on the whole “these are health food” trend. And now their no longer trendy? Sheesh. They darn well better remain on menus!

I dutifully stuck with the article right up until this: “The rise of the avocado is the story of the Californication of our culture.” Snotty digs at my state don’t exactly endear an author to me, is all I’m saying.

That aside, I had no idea there was some kind of healthy-food deal (crank or otherwise) about avocados, because I ignore healthy-food talk entirely. I do like good avocados (bad avocados are very bad), have for decades, and have never been influenced one way or the other by faddish theories of healthy eating.

That’s cool with me. I don’t think I have ever been in style anyway. Poor fashionable thing. Her impression of guacamole is, “a murky brown squelch.”

I grew up not far from Disneyland and we had two avocado trees. My after school snack often consisted of me cutting one in half and scooping out the fruit with a saltine crackers.

I have never heard that avocado is on its way out (not trendy). Anyway, I am glad that you didn’t mean avocado will disappear due to drought: 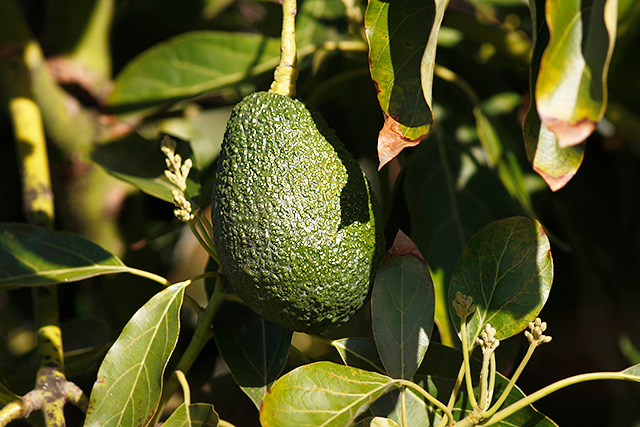 They’d better figure it out alright, because I am not going to be happy eating waterlogged Florida avocados, ixnay.

Or those nasty ones from Chile.

Interesting! I used to adore the avocado (and eat tons of it!) until about two months ago when any amount would give me horrible bloating and sharp gas-like pains! Bye, bye avocado! Maybe my body knew it was going out of style.

My brother took half an avocado pit from a bowl of guacamole at a party when he was 4 and stuck it in the dirt next to my parents’ garage. 22 years later, it is a HUGE 3-story tree that literally showers down hundreds of avocados at a time. My poor mom can’t keep up with them. The housekeeper (from Juarez) takes garbage bags full of them back to her family and friends, and still half of the fruit just dies on the tree or in the yard. They are some of the best avocados I’ve ever had.

Unfortunately I too developed an out-of-nowhere anaphylaxis type allergy to avocados about 4 years ago. Ate one one night (as I did 3-4 times per week) and was fine, then had one the next and my lips swelled. Tried again, my tongue swelled. Tried one last time and my whole face swelled and I could barely breathe. I was so bummed, they were a staple in my diet. I still buy them regularly for the man. We get good avocados here in SoCal year-round. They will never “go out of style” in L.A.

The PROBLEM with avocados today is not that they’re “old hat,” but that “agribusiness” has turned them into a global – well, at least Western Hemisphere – ubiquitous crop, and they haven’t done one hell of a lot for the quality in their rush to market. I too grew up in California (I was a kid before there was a Disneyland), and Orange County was called Orange County because it was covered with hundreds and hundreds of acres of orange groves, a few hundreds of acres belonging to my dad’s side of the family. For variety’s sake, they also had a few avocado and walnut trees. My Aunt Mae and Uncle Bill had a HUGE avocado tree in their fenced back yard that sat in the middle of their grove. Aunt Mae knew how much I love avocados, so on one visit, as soon as we arrived, she grabbed me by the hand, led me through the kitchen stopping for a table knife, a salt shaker, a spoon, and a napkin, then out the back door we flew. She went to the avocado tree where my prize was enclosed in a brown paper bag to help it ripen properly. When the bag was off, there was the biggest avocado I have ever seen in my life! Literally the size of a football! I was around 8 years old. She sat me down on the back porch steps, cut the avocado in half, pitted it, then supplied me with the napkin, the salt shaker and the spoon and told me to have fun! And boy, did I ever! THE avocado of my dreams.

Back then, in the winter months, absolutely yucky thin skinned shiny green avocados were brought in from Florida that many Californians laughingly called “alligator pears” to distinguish them from the knobby black skinned Hass type avocados of California. I haven’t seen one in a supermarket for decades now, for which I am personally thankful. They were lower in fat than California avocados and had an astringent quality to them that most likely contributed to their scarcity today.

The “globalization” of anything and everything related to humanity (especially food) is, in my opinion, responsible for the nasty avocados that are reaching the markets in my area today. I live in Texas, and have seen California avocados in the marketplace maybe once in the last year. The rest of the time they’re from Mexico or South America. They often are stringy inside, brown quickly, develop large mushy black spots on their inside in record time, and some of them have been obviously hit by heavy frost or the trees are not mature enough to bear really good avocados.

You don’t even want to get me started about avocados (and cream cheese) in sushi! I’m an obsessive on-line menu browser and I swear, sushi bars have at least ten times more avocado featuring menu items than any Mexican or Tex Mex restaurant on the planet! As for the writer of the article ElsieDee offers, poor soul. I’ll just bet she orders avocados in a restaurant from once to four or five times a week. If she didn’t, how would she know???

I have seen those big ones occasionally in stores here WA. Once there was either a sign or a produce guy who called them diet avocados.