The crust of the matter: old mugshots of Cambridge pizza

OK, some of these are ass-shots, but that’s the best way to judge crust. Here are the backsides and profiles of some Cambridge area pizzas. These are old pictures, and things may have changed. If anybody has a lineup of more recent pictures, please post. 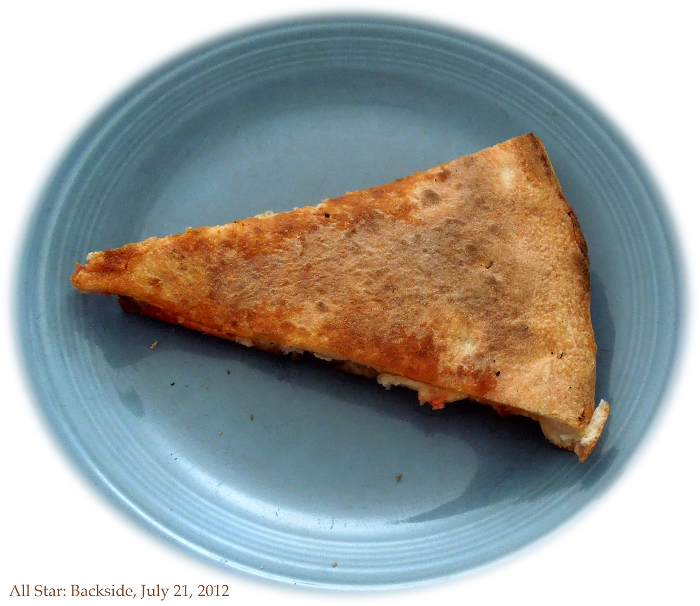 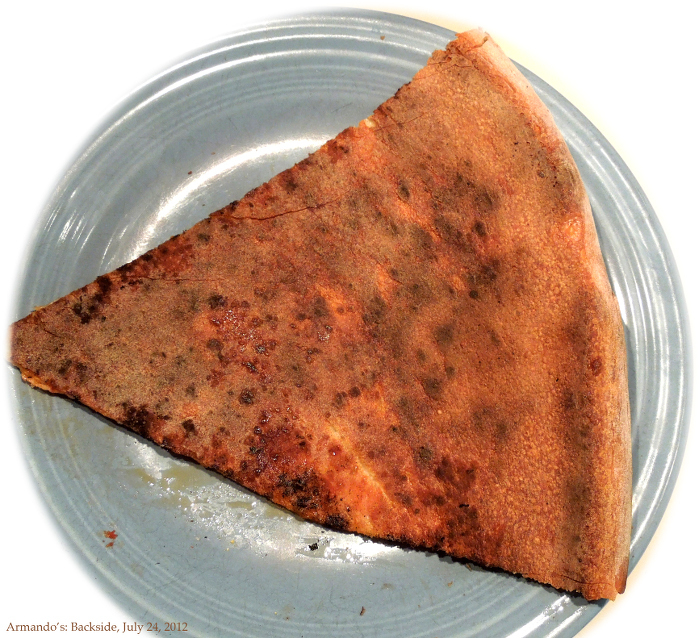 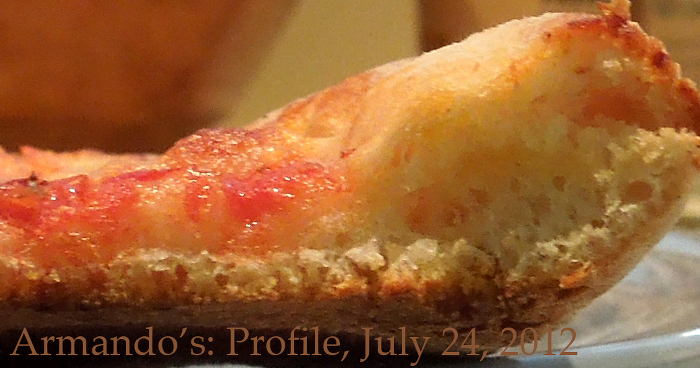 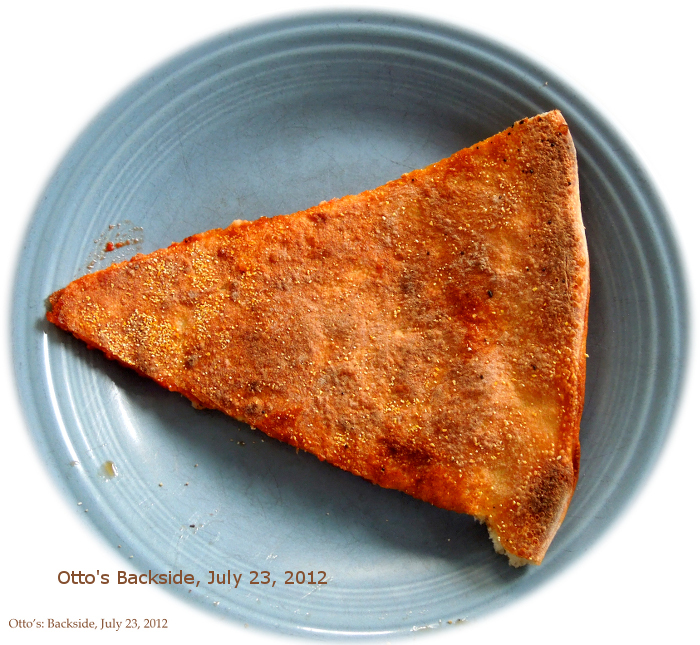 ha, this is great. i need to go back to Armando’s. haven’t been there in a long time.

I think Armando’s pizza has gone downhill recently after Armando Paolo stepped away from the day-to-day business, and especially after he died last year.

ah, good to know. I won’t rush right over, then.

At its best, Armando’s was remarkably good. The cheese they used was the standard-issue, industrial mozzarella brick, but the sauce they made was terrific, as was the dough, and ultimately there was the near-perfect proportion of sauce, cheese and crust. There was no pretension, no fuss. Just fantastic pizza turned out hour after hour, day after day.

Fifteen years ago there was a brief area-competitor in Real Pizza, opened by Rene Becker of Hi Rise across from Fresh Pond (where the Village Kitchen stands today). They made their own mozzarella, and they offered fancy toppings. The pizza was very good, and the nightly dinners that Eduardo Miranda, briefly absconding from Formaggio Kitchen, offered were superb. But the power of Armando could not be denied. Real Pizza lasted about two years.

(Of course, years earlier, Emma’s Pizza was originally in that neighborhood, too, and I assume they and Armando’s co-existed peacefully.)

Waaaay back in the day, the original Emma’s Pizza and Armando’s did indeed happily co-exist. I grew up in that area and your family was either an Emma’s family or an Armando’s family. (We were Emma’s.) That was before some young folks bought Emma’s and took it upscale.

What time frame are we talking about? We first went to Emma’s in 1993, and at that time the owners were “Emma” and her SO (husband?). I do remember that they sold the place at some point, and then the whole operation shifted to Hampshire St.

I was wrong about the dates. Here’s a more accurate history of Emma’s:

“It was moved here to town by Emma and her husband, Gregory, from Revere Beach in the mid 60’s. The shop occupied a modest space on Huron Avenue in West Cambridge”

“Wendy Saver and David Rockwood were customers of Emma’s, and like me and, I bet, all of Emma’s customers, they patronized her because she sold dependably good, thin-crust pizza, and was herself dependably grouchy, if not disagreeable, a piece of work, a phenomenon. Occasionally, unaccountably, and even more remarkably she would smile and say something pleasant. Wendy and David missed her pizzas. Wendy was doing marketing for a theater, and David was working for a caterer. For a lark, they asked Emma to sell them her business.”

(The full article at the link above provides a fascinating glimpse of what it was considered OK to say in the mid 1990s – not that long ago, and an attitude to which we might, sadly, well be returning.)

“Emma’s has been a Cambridge staple since it first opened in 1962. It relocated to the 40 Hampshire St. spot in 2000, and Weingast has owned the restaurant since 2004, as previously reported.”

We haven’t had the thin crust in quite some time, but the Sicilian has been as good as ever the two times we’ve had it recently.

Yes, I was only talking about the thin crust. Have not had their Sicilian in many years. Glad that it’s still good.

Yeah, we hadn’t had it in several years either and I was prepared to be disappointed, but it still satisfies, especially after crisping the crust for a minute in a hot toaster oven or on a heated pizza stone. (During the 20+ minute ride home it steams a bit). Half a sheet pan works well for three of us, with a couple of slices left over. It takes about twice as long to bake as the thin crust, though. They usually quote 45 minutes, but it’s been just over 30 both times on a Saturday night.

the Sicilian has been as good as ever

also good to know! thanks.

Ah, so in the reign of Emma herself. I put “Emma” in quotes above when referring to my first experience of that pizza, because I could not remember if that was what the woman behind the counter was called. We moved into the area in 1993, so Emma should have been in charge, but being around the corner from Formaggio Kitchen (30 second walk) we were so dazzled by that sun that we could not see anything else in the area for many months. And, if we wanted pizza, Armando’s was very close and on our natural walk for work reasons. So, it’s possible we did not actually go into Emma’s till 1995, at which point (see the history I posted above) Emma was not in the picture.

Did you eat the pizza after Emma left? Was there a change in it?

Oh yes, big change. The original Emma’s was very good but standard, basic pizza. When Wendy and David took over it was much more upscale, they had two choices of tomato sauce and fancy toppings. As I recall, it was briefly a Chowhound sensation. At least once during the early Wendy and David days I was in there eating at the tiny counter and realized that someone else at the counter was a Chowhound (an experience I had more than once back in the well-named golden age of Chowhound). Wow, that really was a long time ago, lots of deliciousness under the bridge since then.

Thanks. Did some more digging. Chowhound was founded in 1997, and the earliest reference to Emma’s I found on it was from 1999 (but their amusingly named “search” feature is notoriously shaky). Here are tidbits:

Sep 1999:
Ivan and Sarah Sep 11, 1999 12:53 AM
Probably the best current pizza in Cambridge is at Emma's on Huron Ave (right past Formaggio's). Emma was an Armenian who grew up in Venice. She was really grouchy and used to lick her thumb and pop the hot crust-bubbles while the pizza cooked. I was reared on the stuff. She's retired, though, and the new Emma's is gourmet/fancy with ingredients like goat cheese, caramelized onions, etc. and is excellent. You have to take the pizza to go.

bill Nov 23, 1999 10:06 AM
you neglected to add the bizarre tension that existed between Emma and her (seemingly, anyway) beleagured husband, who used to stand in the window, rolling dough, gazing out into the street from behind a periodic cloud of flour, looking wistful. if i'm not mistaken Emma is still the landlord for the building....

franc May 14, 2003 09:07 PM
In the old days when Greg was the pizza maker and Emma manned the counter the pizza was heavier. The sauce was thicker. The toppings where few.Roasted anything? fergetaboutit! Smoked anything? fergetaboutit! The only slices where tom & cz or peperoni. Greg rarely spoke and Emma was curt and suspicious of everyone. Especially us kids. The crust was thicker. About a 1/4 inch. Never crisp. Not even around the outer perimeter. It was like Armando's but without the personality. Thank God that we have evolved.

And I say thank god for the mention of crust. It keeps this Emma's digression on the topic of this thread: crust.

Wow, you do awesome research! Thanks very much for that trip down memory lane… clearly the Chowhound search function is not the only notoriously shaky thing around here, so is my memory.