The Breakfast Gold Mine in Holmdel, NJ

An end of summer musing…

You haven’t lived until you’ve been to the Holmdel Towne Center on a weekend morning, especially in the summer. There is a certain craziness centered around two unaffiliated businesses. The first is Holmdel Bagels, whose sign out front is only a mere, nondescript “Bagels”. Right next to that is a Rook Coffee. I have lived in this area most of my life, and recently have moved even closer to where this location is. My friend Ben had raved about Holmdel Bagels, saying they make one of the best pork roll (he is one of those people who calls it Taylor Ham) sandwiches around. I am not fond of that particular meat, and enjoy strictly carbs in the morning more than anything else, so I wanted to try their bagels. They are actually excellent. I always ask if they can pull a well-done everything out for me, and they usually deliver. One time, the guy behind the counter even went into the back room to find a dark one that was going to be discarded. It was perfect to me. Justin’s go-to here is a blueberry bagel with walnut-raisin cream cheese which he says is to die for. 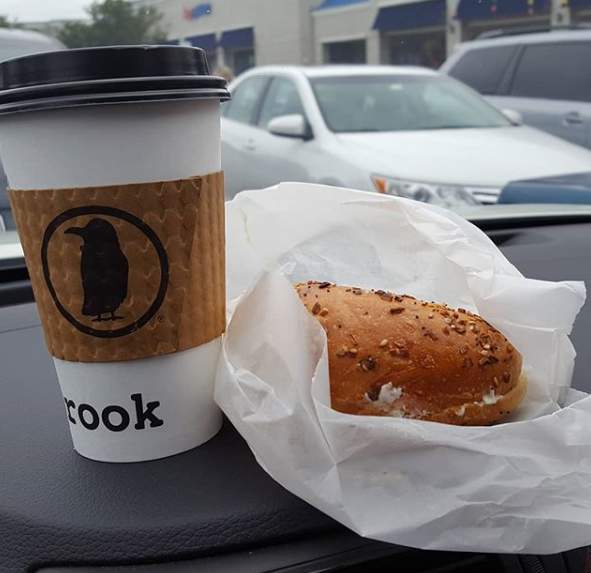 Anyway, there is, without fail, an enormous line out the door in the morning. Most look like they are heading to the beach. I grab my bagels in a bag to go. Sometimes I’ll have them toast and butter them. In either case, I am in the minority. Most are ordering meat-filled sandwiches or omelettes. I don’t blame them, because the prices are fantastic. I think it is something like $5 for a three-egg omelette and it includes a bagel. Breakfast sandwiches are cheaper than that. While standing on this long line day after day, I noticed the formula. People go into Holmdel Bagels, place their order, and leave and get their coffee at Rook. The grill at the bagel place is a tiny one, maybe about the size of a pizza box. They can’t get the food off there fast enough. By the time the customers are done getting coffee (also usually a 10-15 minute wait), their breakfast is done and they grab their food and hit the road.

These two shops are a sheer gold mine. The money pouring in one sandwich after another and one coffee after another is mind-boggling. Maybe it is just me, but it seems like such a New Jersey thing. Rook aside, the fact that people are compiling their breakfasts from two separate places so they can mix and match awesome sandwiches with excellent cold brew and timing everything just right so they don’t have to wait any longer than necessity dictates is something fitting of this area.

Thanks for the heads up. I mentioned your post to my gal and she said immediately that this local ritual goes on the FOMO list.

So question Greg, what were your go-to bagel joints before this? Have you every tried Bagel Masters in Shewsbury?

My one and only go-to bagel joint was Eli’s in Matawan. Went there at least once or twice a week with my dad. After he passed away last June, I went once more and then could not bring myself to go back. That was “our” place for breakfast. I then bounced around. Old Time Bagels in Hazlet was very good. Super nice owners. Then I did Sheepshead Bagels for a while and I never quite realized the weird aftertaste they gave off until someone pointed it out in another board here. I was always very thirsty after eating one. Then about a month or two ago, finally tried Holmdel Bagels and I believe they are the best bagel around here. Haven’t been anywhere else since. I actually realized just how average the bagels at Eli’s were after having the Holmdel ones. And this is from someone who ate them at least twice a week from around age 14 until 25.

Shrewsbury is a bit far for a bagel run, but I would like to give them a try. Have read many rave reviews.

Won’t know if its good without trying it…at least once.