The Biscuits of La Boîte

As many of you will know, La Boîte is the spice boutique at the unlikely location of 724 11th Ave (at 51st) run by the famed spicemaster Lior Lev Sercarz. There, nestled among car dealerships, lies this shrine to spice. At one time it was open to you and me by appointment only, but they now have regular hours, although you still have to be buzzed in. (Website http://laboiteny.com/)

I’ll talk about their spices separately, but I want to talk about their “biscuits” here (if you call them cookies, the staff will earnestly and firmly correct you). These vary seasonally (they say). The current spring/summer 2017 collection retails for $65 a box. At that price, how could I refuse?

For the privilege of eating cookies biscuits at that price, you get a wooden box wrapped in orange tissue paper (with rather obvious scotch tape). You peel off the paper, open the box and get – another box, metal this time, also wrapped in orange tissue (and more visible scotch tape). Just when you think you’ve begun on a nightmarish sequence of nesting boxes, with perhaps a single biscuit at the core, the metal box opens to reveal – a message from Lior himself: The biscuits “by Lior Lev Sercarz” he says, speaking of himself – like all great people – in the third person, “brings a new concept to life by combining the arts for the palate with a vision that warms up the soul.” There was more, but I was crassly distracted from these inspirational words by the smell of baked goods. There were about 40 or so small biscuits in the box, of 5 types:

Here’s what they look like in the flour from the top (from top left carob, then the others in the order above) : 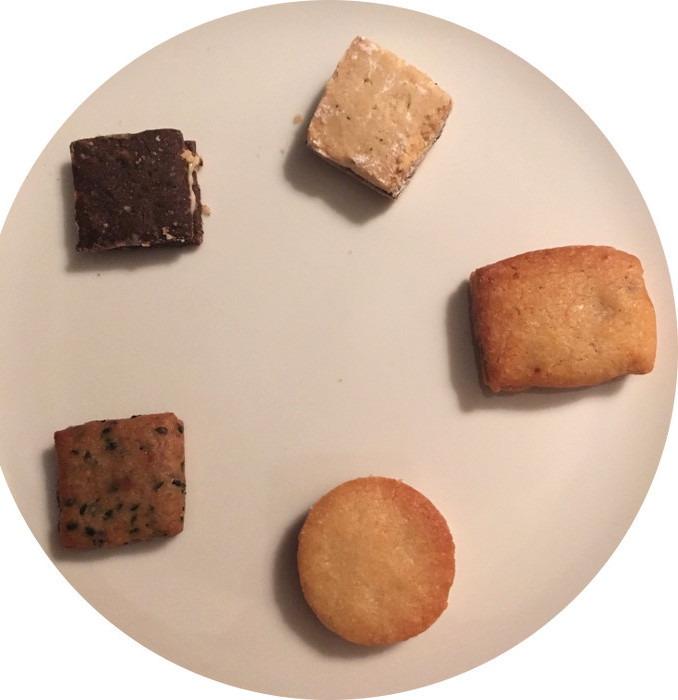 And here they are stripped naked: 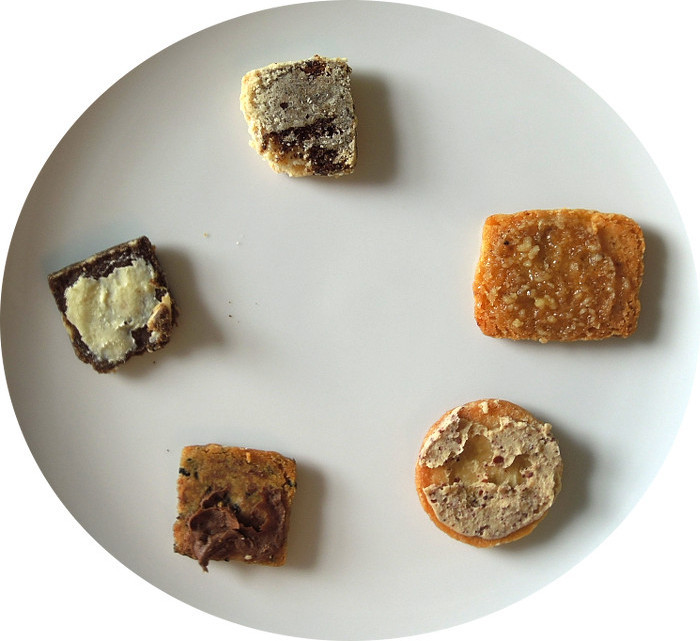 The carob had a filling I could not easily identify, and I thought it the weakest of the lot. I’m sure there’s an elaborate philosophy behind “why carob, why not chocolate?”, but I’m afraid to ask. The halva was not obvious (the cookie was shortbready), but the filling was a mild poppy paste. The crisp aleppo cookie with the honey filling was, I thought, the best of the lot. It had real bite. The chickpea cookie was hard rather than crisp, and the olive oil (in the filling?) not obvious. The pomegranate filling in the cookie that dares speak its name was delightful and the cookie itself had nigella seeds.

On the whole, I thought they were very good, although I don’t know if they’re worth over a dollar a pop.

Thanks for writing about these! I don’t see myself spending so much on some … biscuits, but those sound like some interesting flavors. I don’t “get” the spices shop, especially since i can buy nearly twice as much maldon smoked salt for $6 vs his jar for $12, but maybe the spice blends are really fantastic…?