Five of us had a nice dinner here last week during their “soft launch” phase (same owners had a Boba tea place in the same spot). We were waited on by the co-owner, a delightful, sweet, but harried woman – service was a bit random though they were half full (we came at 6PM). They serve beer, not wine (yet), did not charge a corkage fee; we brought our own glasses. I drank most of two bottles of wine so my review is a bit sparse.
Most important is that their prices are quite low compared to other Burmese places I’ve been. So some portions are small or at least small in protein.
We had these (as I recall):
Mohinga (catfish noodle soup) oddly one of the few dishes not listed by its Burmese name on the menu; I thought it did not have enough of the ground catfish. She recommended adding more fried things – there is a list of them at the top of the menu; we did not add any.
Tea Leaf Salad – not enough of the crunchy/seedy bits; mostly lettuce. Disappointing.
Rainbow Salad – OK, better than the tea leaf salad
Burmese Curry chicken – came with rice and a few sprigs of broccoli. Chicken was tender and flavorful.
Garlic noodle with Chicken; came with a bowl of broth that I didn’t get to taste. Chicken was excellent.
I can’t recall the name of my favorite dish, under the “snack” section of the menu – a large bowl of pork innards (stomach, intestine, liver) stewed in a rich slightly sweet soy broth. I was in hog heaven though the intestine was too chewy for some people (and some people would not touch any of it). A tart slightly spicy dipping sauce came with it ($6).
Tea rice – they invented this dish and it was a wonderful surprise: a large mound of white rice generously interspersed with fermented tea leaves, accompanied by shredded lettuce and some tomato. Excellent and a great value ($2).
Faluda (dessert) rich, milky, boba balls, topped with ice cream; fairly sweet

She comped two desserts:
Semolina cake – not too sweet, excellent
Coconut jelly – not great (bouncy – maybe made with agar)

had only the Tea Leaf Salad (8) personal size portion, not enough to share
-no authentic pungent taste from tea leaf, nada taste
-most noticeable taste is the tartness, and occassional crunch
disappointing overall
Hornbill (el sobrante) was the most pungent and authentic tea leaf salad ever tasted,

2 scoops ice cream free if one checks-in on y… and write a review.
-passed on it.

I went on Thursday, and it was a very positive first visit.

Two of us shared 4 items. We did not go for the combo special that most tables were ordering, since we were more interested in noodles and salads. After visiting Burma this past summer, it was exciting to see some dishes on this menu that we had there but haven’t seen much at US restaurants.

Tofu salad – Their chickpea tofu isn’t quite as smooth as other versions, but it had a slightly spicy dressing and was mixed with a bit of cabbage. Quite good, and a big serving.

Samosa salad – I couldn’t tell if the samosas themselves were homemade, but I liked them. Potato filling, slightly spicy. These were cut into big pieces, and dressed with a tamarind dressing, garlic, and crispy shallots, then mixed with cabbage. All of this was served over thick chickpea porridge (I forget the name for this in Burmese, but we saw it and ate it a few times in Burma).

Coconut Chicken Noodles – Probably my least favorite dish of the evening, but not bad. Egg noodles served in a coconut soup, topped w/ some crispy noodles. The flavoring of this particular rendition was more similar to Thai Khao Soi than versions elsewhere.

Shan Noodles – We ordered the dry version (as opposed to the soup) and the flavor profile was different from anything I’ve had in a Burmese restaurant in the US. It did remind me of Shan noodles I ate in Burma for breakfast everyday, though not quite as good. I think the main criticism I had was that there was too much flavor coming from what I think was black cardamom (although perhaps it was star anise?). But otherwise we really enjoyed these.

Meal was more food than we could eat, and it only cost $32. Go soon while the prices are so reasonable!

Some things I wondered:

I’m eager to return to try other noodle dishes, and to hear what other folks think. 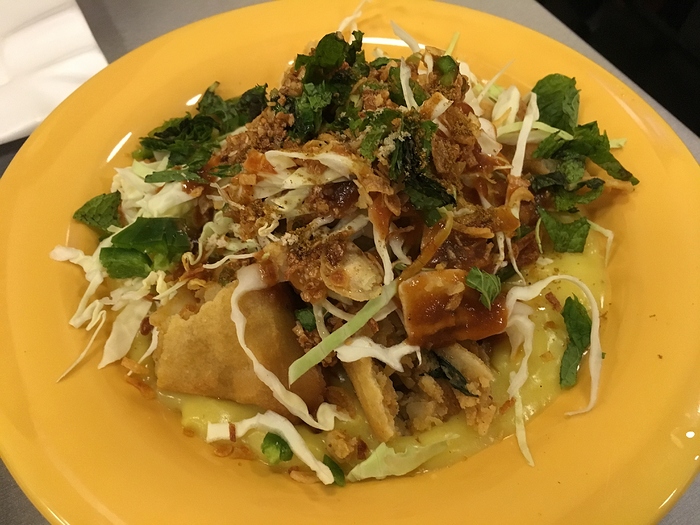 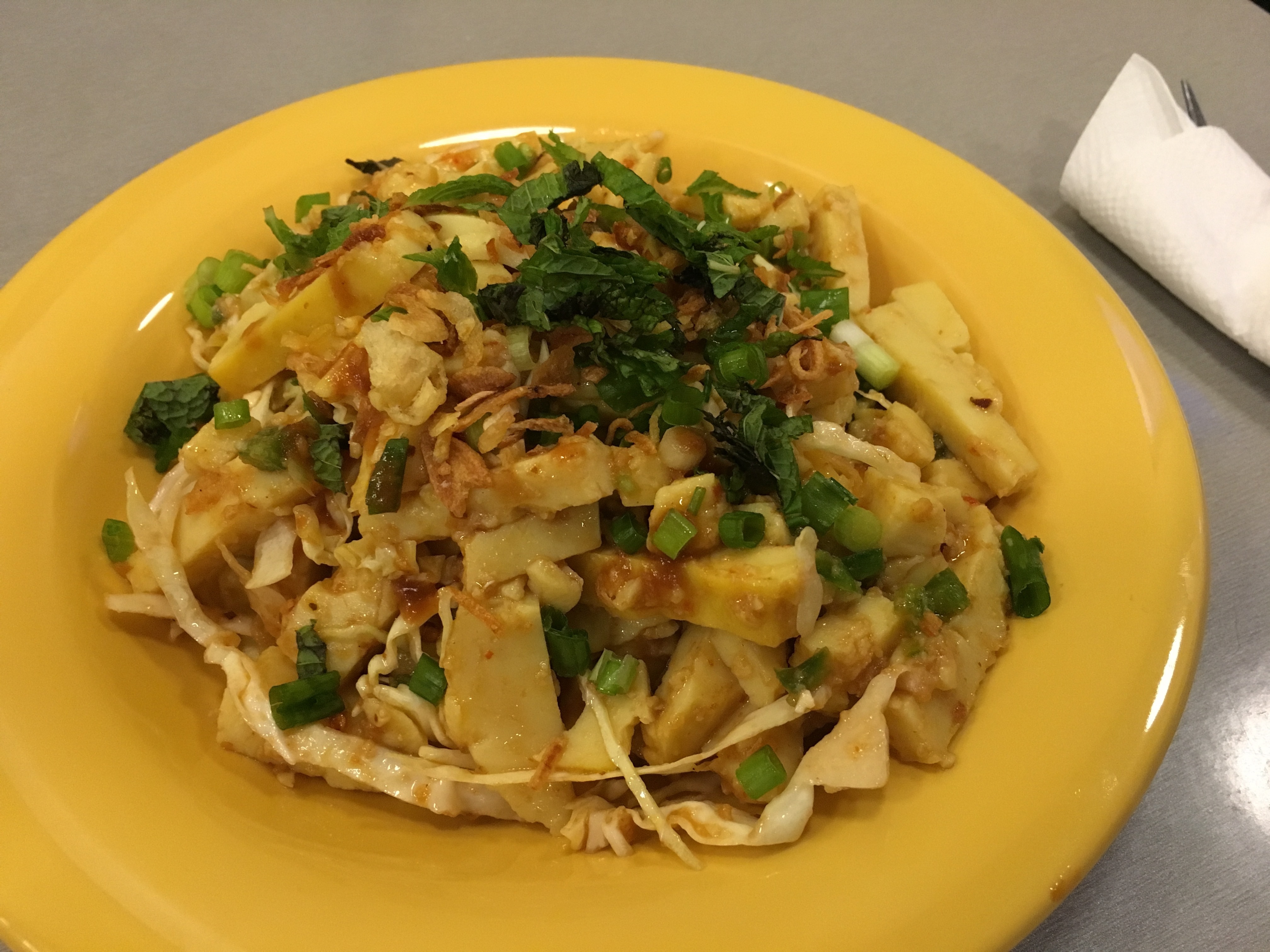 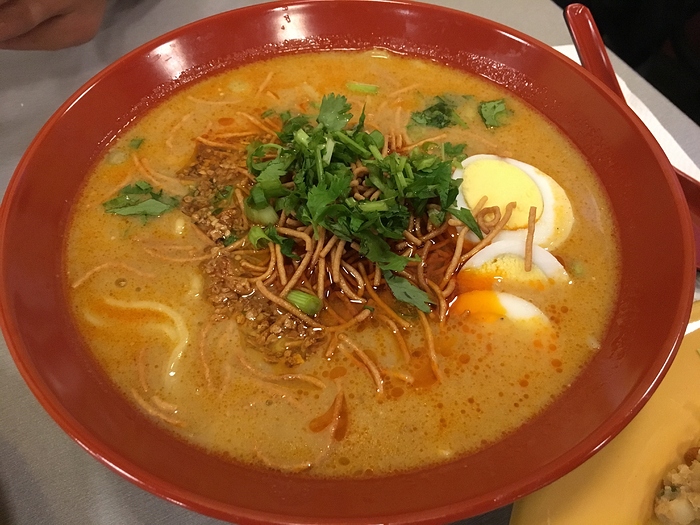 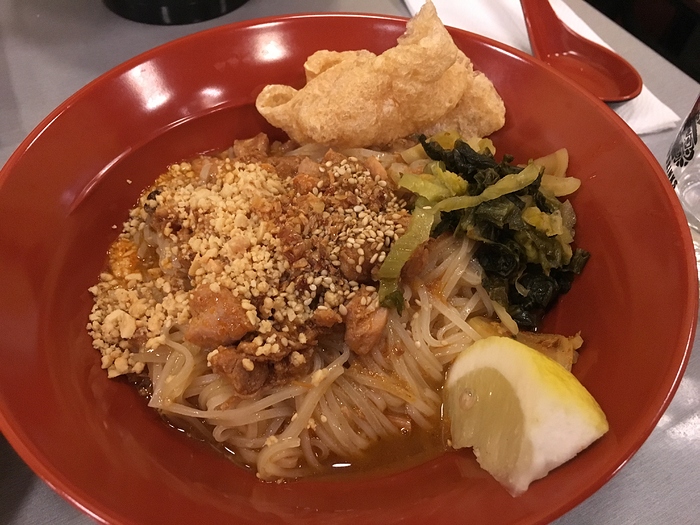 Looks like they’ve added quite a few things since I was there last when it was still branded as a Boba shop. I’ll have to stop by soon.

Had a bowl of mohinga ($9) at Tharaphu on a Saturday evening. Not a bad bowl. Plentiful noodles and little chunks of catfish. They use little fried noodle bits instead of corn fritters in the mohinga to provide crunch. Was missing a bit of salty flavor though. They are MSG free, maybe MSG was the flavor I was missing. I had also wanted to try the marinated pork offal appetizer they had on the menu but they were out of it unfortunately. 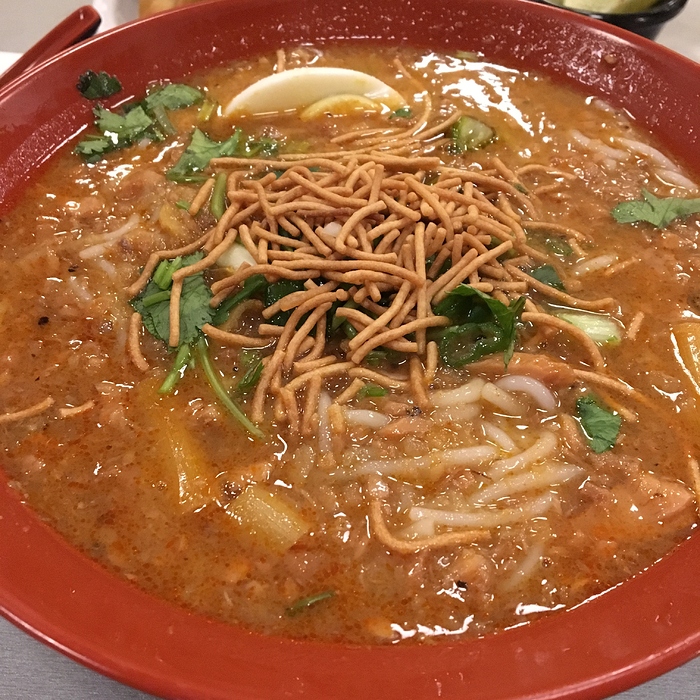 Also added a samosa (+$1) which was quite large. It was good, stuffed with mildly spiced potato. 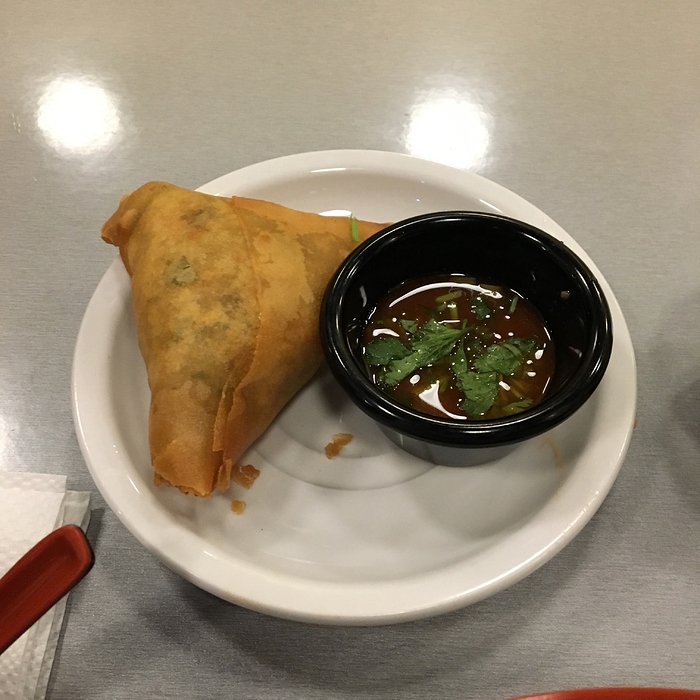 Mason jar of faluda ($4.50) topped with ice cream for a dessert/drink was nice. Sweet with an interesting combination of textures. 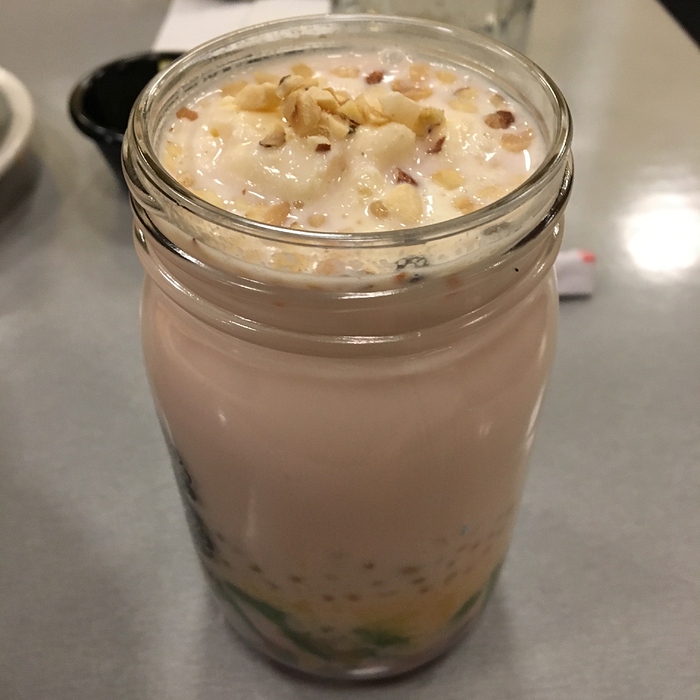 Little Yangon, for one, has mee shay noodle salad.