I will be traveling to TX again this year (in on Tuesday, out on Saturday) and will be the one cooking T-day - yes just me. Unfortunately the Air BnB we’ve stayed in before is booked, so we are stying in a new place. So I have no idea what is or isn’t in the kitchen (I had left several things in the previous place so I had them from visit to visit).

Our menu will be the same as always - I don’t have the time to experiment when traveling and unfortunately I can’t do anything ahead of time (I usually make rolls and freeze them, turkey stock and freeze, pie crusts and freeze . . . but not an option).

Ugh, the thought of having to do it all is giving me the shakes. It’s the same meal every year, though usually I do 1 or 2 things new for each year - but hell no when traveling and doing it all in a day essentially.

The rolls and pie crusts will be purchased, everything else from scratch. I’d cut things but someone will be upset that I cut “their favorite part of the meal”. So it’s just easier.

I was surprised how many “it will be fine” foil pans, and plastic serving containers I was able to find at the Dollar Store, Grocery, and/or party city (thanks to previous posters on other threads for the suggestions from previous years). . . . so I’ll just deal with what I can find once I’m there.

Ugh, the thought of having to do it all is giving me the shakes.

It does sound daunting. I would be packing my favorite potato masher too.

I used to do the Thanksgiving Day dinner at Mom’s, but I will be at Mom’s assisted living home this year, as I was last year. As long as she’s alive and able, I’ll be with her. My sister and BIL will likely join us before heading up to his mother’s house for dessert.

The home did surprisingly well last year with a beautiful roast turkey they brought out to show the residents and family members who were joining them before carving it up (or spiral sliced ham if you wanted it), gravy, cranberry, stuffing, mashed potatoes and some veg - I can’t recall what. I think dessert was apple or pumpkin pie with vanilla ice cream. There’s no wine, so I’ll have that when I get home.

I expect I’ll cook a small turkey breast that weekend, as not cooking for Mom anymore doesn’t stop the urge to want to make a Thanksgiving dinner. I’ll just keep it on the smaller side, since I’m only going to be feeding myself. And I refuse to go anywhere near retail stores that weekend.

I think @Karen_W has just provided my two side veg with the green beans with frizzled shallots (which I think I made once for Mom and she didn’t like them) and Julia’s Potato Dauphinoise. If I screw up the taters, it’s only myself I’m disappointing. And since I’ve done that countless times over 40+ years of cooking, I don’t feel so bad anymore. I’ll just have more wine to comfort myself.

I’ll make an apple or pumpkin tart. And I’ll open a really special bottle of wine from my stash.

What about a good set of knives? I’m assuming that can be packed as well since you won’t know what condition the knives will be at the AirB&B? Otherwise, I think you’ve got a good list of “required items”.

GretchenS - ah yes, the potato ricer should be on that list too! Good call.

I would love to travel with my knives but with security the way it is and the airlines loosing my bags all the time - I try to only travel with a carry-on . . . . last year I just bought a dumb grocery store/target knife, which actually did fine for the one meal. So that’s my plan again.

Thankfully, it’s in AZ, so outside is a definite probability for the overflow seating. Which it most definitely wouldn’t be here in New England. LOL

After being duly admired, the show turkey goes to leftovers and sandwiches. I love the practicality of this for two-turkey gatherings.

I get it, @Thimes, and I envy you. I miss cooking for Mom a LOT, as at least I know she was getting something nutritious and homemade than the Lean Cuisines she used to make for herself if not pan-cooking a hamburger or piece of chicken when she still lived on her own. Mom hasn’t gone out for a meal since moving into AL (except a brief lunch for an off-day Mother’s Day the first year she was there) so as much as I would love if she would agree to be driven to my sister’s house where Sis and I could do the cooking, Mom gets tired much too quickly. The 1.5 hours or so for the meal at the home will be more than enough for her (and we’ll probably tuck her into bed for a nap after the meal). I’m hoping it’s an “up day” for her, as she has been having many more “low days” recently.

And I get it with the knives - wasn’t sure what airline security would allow in packed bags. Buying a one-off knife works in a pinch such as this.

Mom’s home has about 20-25 current residents (and that number is probably a bit high) and many still go out on holidays or to their kids’ houses for their meal. I think there might have been 15 of us there last year, and the turkey was actually carved tableside, which seemed to please the residents no end.

Their meals are all from scratch, and are surprisingly good. Now if I could just get Mom to eat a bit more of it, as her appetite has drastically diminished over the past year. 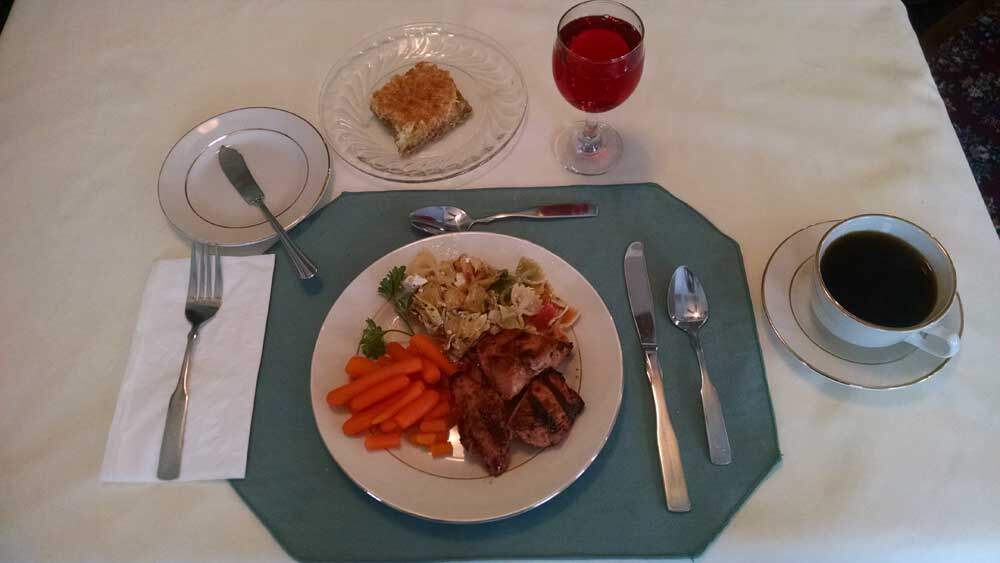 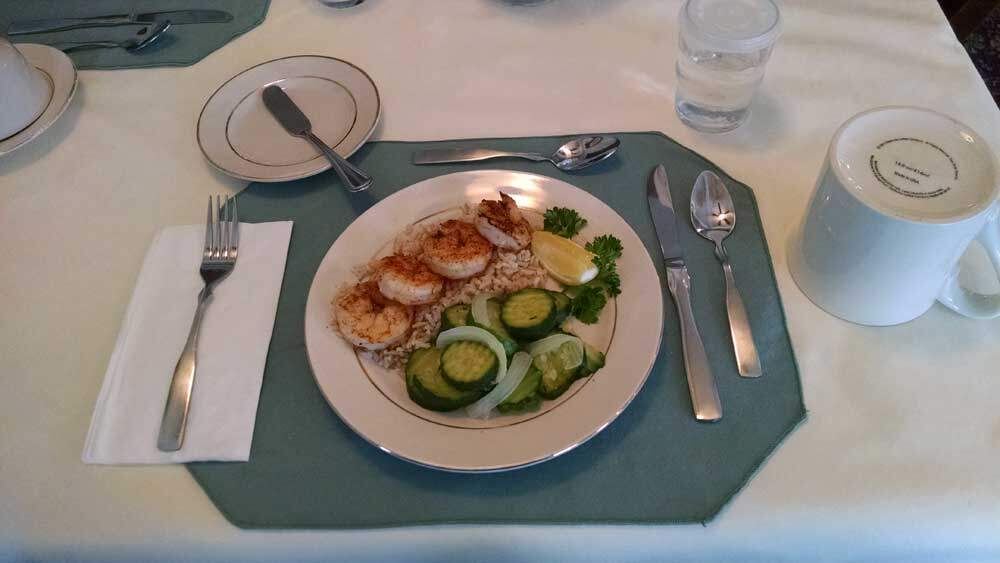 It must be a typical script - my MIL was eating Lean Cuisine and then was relying on protein shakes for meals . . . so being in AL has been really good for her (she agrees) and gives us more peace of mind too. Getting old gives you a lot more to be Thankful for . . . . sorry she doesn’t have the energy she used to have.

We will pick my MIL up for the meal and then back soon after. She is only good for ONE “thing” a day, anything more wipes her out. We’ve tried to do two things in a day, sometimes even just lunch and then an errand . . . nope. It’s lunch OR the errand not both.

So all you young folks reading this thread - remember to be Thankful that the people you are with are able to be there!!!

We will pick my MIL up for the meal and then back soon after. She is only good for ONE “thing” a day, anything more wipes her out. We’ve tried to do two things in a day, sometimes even just lunch and then an errand . . . nope. It’s lunch OR the errand not both.

We are living the same life, @Thimes. A doctor’s appt. is all she can manage - we once tried two in one day, and she was plum tired out for 2-3 days after. But I’m glad I can be there for her, as I’m sure you are.

And NOW back to your regularly scheduled program of what everyone’s making for Thanksgiving dinner!

One tip on this, not sure where you are located but my favorite shopping tip during the holidays is to order groceries online and then pick them up at the store. They shop for you! The cost here is nominal and is 100% worth it for me not to have to battle my way through the store.

), and it’s good, in case you want to add that to your order and free up luggage space for something else.

Thanksgiving is a favorite holiday of mine! This year we are flipping the script and trying to double dip. Hopefully this works out. On the actual day, we are going to go to my husband’s cousin’s house. We went one year when I was pregnant because my mom was crazy sick and I was nervous to catch whatever she had. Thanksgiving was straight out of Martha Stewart! It was awesome!!! They are foodies and it was really tasty. I ate everything in sight.

I managed to convince my side to move the holiday to Friday to accommodate us! So, we will trek there the following day. Saturday. Salads and detox!!!

I always make pies. Pumpkin and apple. Sometimes a third if I have time (unlikely this year). I make an all butter crust. The trick for me is enough rest time in the fridge (overnight is ideal). I also am charged with crock pot stuffing which will be a little challenging now knowing the timing of all these events. Typically, I bring another side veggie. Brussel sprouts with bacon or something in that genre.

My mom makes these incredible rolls. They are yeasty, buttery, light. Tons of work but god, I adore them.

One tip on this, not sure where you are located but my favorite shopping tip during the holidays is to order groceries online and then pick them up at the store. They shop for you! The cost here is nominal and is 100% worth it for me not to have to battle my way through the store.

The plus side is that I can go into the supermarket AFTER Thanksgiving for what I need for my weekend meal (although I probably will have purchased the turkey breast the weekend before). I’m north of Boston, and I will venture out to the local stupidmarkets on Black Friday, as several are located in what I would call “non-Christmasy-type-of-shopping” strip malls.

We have settled on Pepperidge Farms cornbread stuffing mix. A friend recommended it some 30 years ago, along with her additions of walnuts and blond raisins. The kids objected to the fruit and nuts, so we just add onion and celery. Good broth helps.

Simple Tgiving for us seven. This year half the family planned to visit friends so we’re having an early Tgiving get together/second bday party for our niece on a Sunday. Turkey (dark meat braised and breast roasted), gravy, dressing, potatoes, fresh garden beets, maybe a green veg, rolls. Bday cake for dessert. Simple for apps (cashews and maybe a dip). New this year: I’m asking my step-mom to bring the dressing (and fearing giant chunks of celery ::shudder:

and cranberry sauce. I’ll ask my bro to bring a potato side dish. I’ve planned out my timeline and to-do list and this is looking so easy…I think Tgiving should be moved to Sunday permanently.

As some one who spent some 35 years in retail I thank you. The Friday after Thanksgiving is the slowest day for grocery stores. I’ve picked up some great deals, a turkey for Christmas for about two bucks and a steal on four pounds of shucked oysters.