Went last night. I don’t know what the deal is, but whatever their efforts in controlling quality are (I’m referencing Melanie Wong’s chowhound review that the chefs were taking pains to “ensure consistency and quality”) , they don’t seem to be working on Wednesday nights around 6. I have to think that we ended up with the B-team in the kitchen for all but one of our dishes.

The highlight was the sea cucumber, which had a nice snap to it in a delicate sauce. The oyster pancake was fine but had little of the crispness Melanie mentioned in her review. Shrimp ball appetizer was also OK, with a fairly light consistency, but seemed like it had been fried at too low a temperature to really get the surface of the balls deliciously crispy rather than greasy.

The pork stew was a borderline disaster. While all the components - sliced pork belly, pig ears, thin rectangles of tofu, hard boiled egg - were tasty and had great texture, the dish was wrecked by being far too salty, like the cook had accidentally cooked it in twice the correct amount of soy sauce. The small portion of rice served with the dish was not nearly enough to balance out the salt. I am eating the leftovers as I type this with a huge pile of rice and with a couple splashes of water added to the stew.

On top of this, the maitre d’/host was clueless about the grand opening offer that Melanie mentions in her review (“a complimentary platter of signature dishes, plus $5.00 cocktails”). After checking around once I showed him the Facebook offer on my phone, he confirmed there was an offer…great, except no complimentary platter ever showed up, and we didn’t feel like pressing the point. There is no cocktail list yet, so as best as I can make out you either were supposed to go to the bar yourself and order a standard cocktail like a martini or old fashioned, or give your order to your server to relay to the bar.

Teo clearly has the potential to be a very good restaurant - I could see beautifully cut veggies on dishes at other tables, and the staff did seem to care about people’s experience - but quality/price ratio, based on my experience last night, felt like a ripoff. It’s hard to stomach when a Chinese restaurant charges these kinds of prices but then cuts corners on little things like serving the $4-5 Ten Ren tea with tea bags instead of using looseleaf tea. We left glad that we had decided not to gamble $38 on one of the crab dishes. 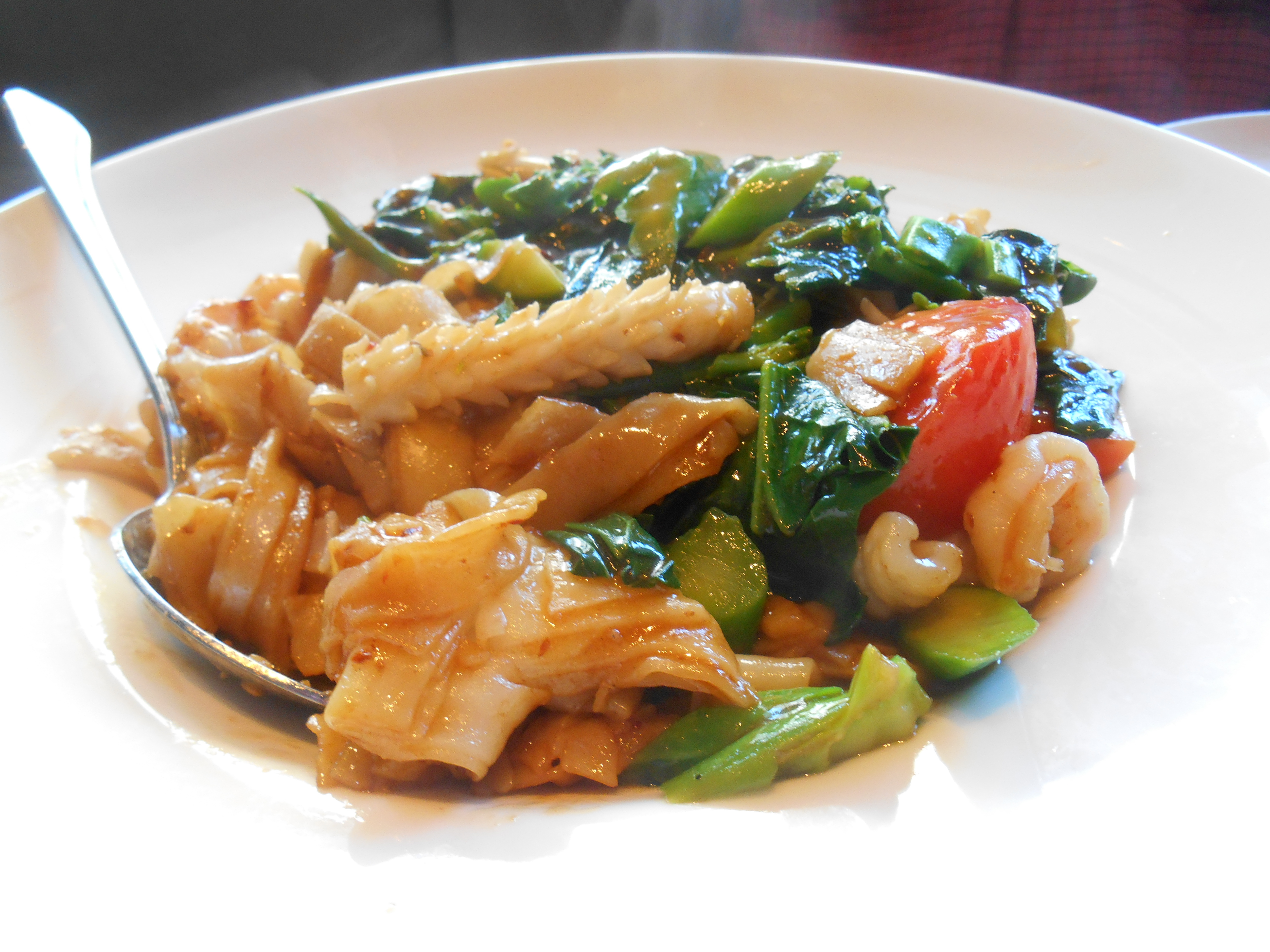 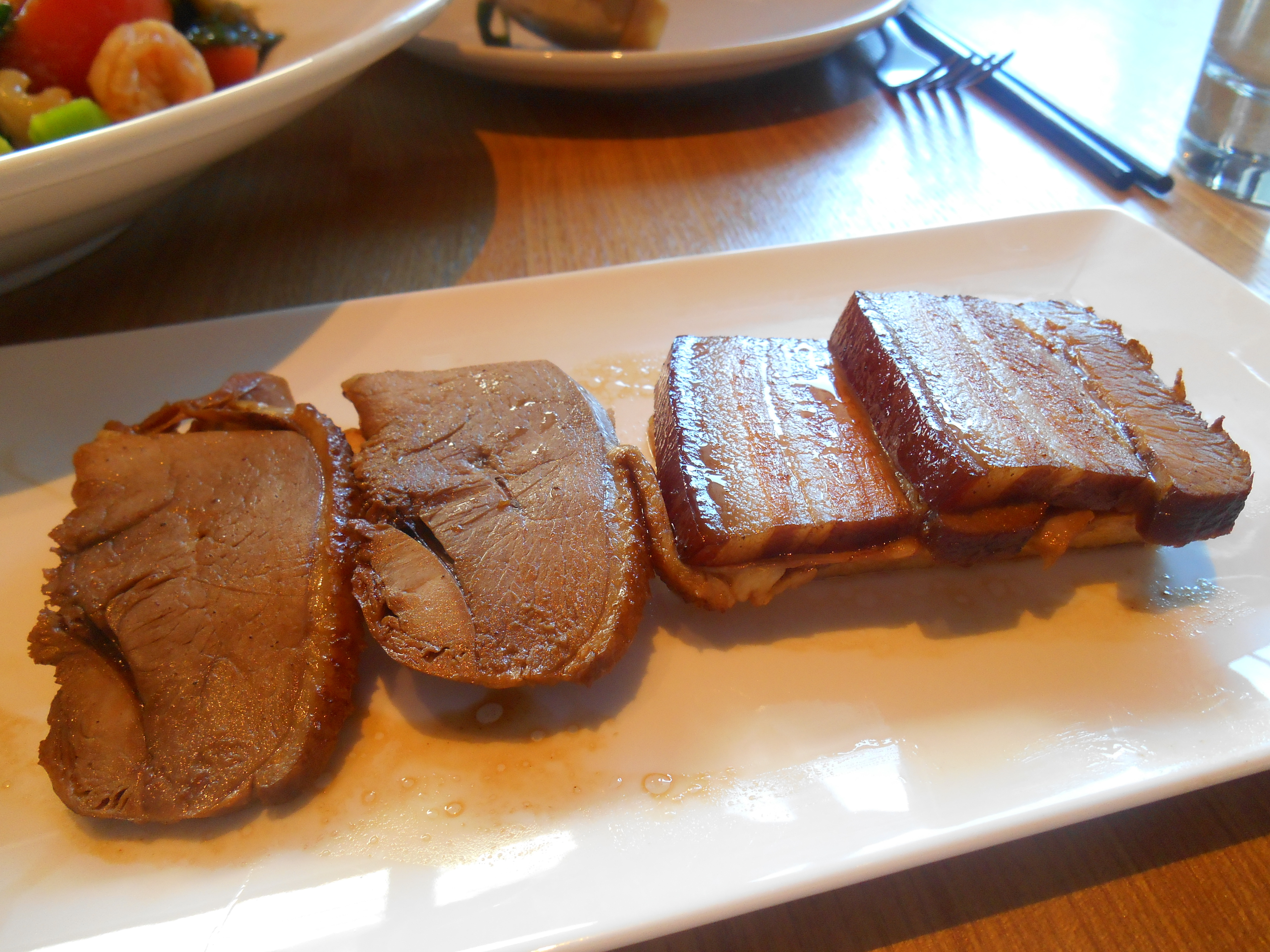 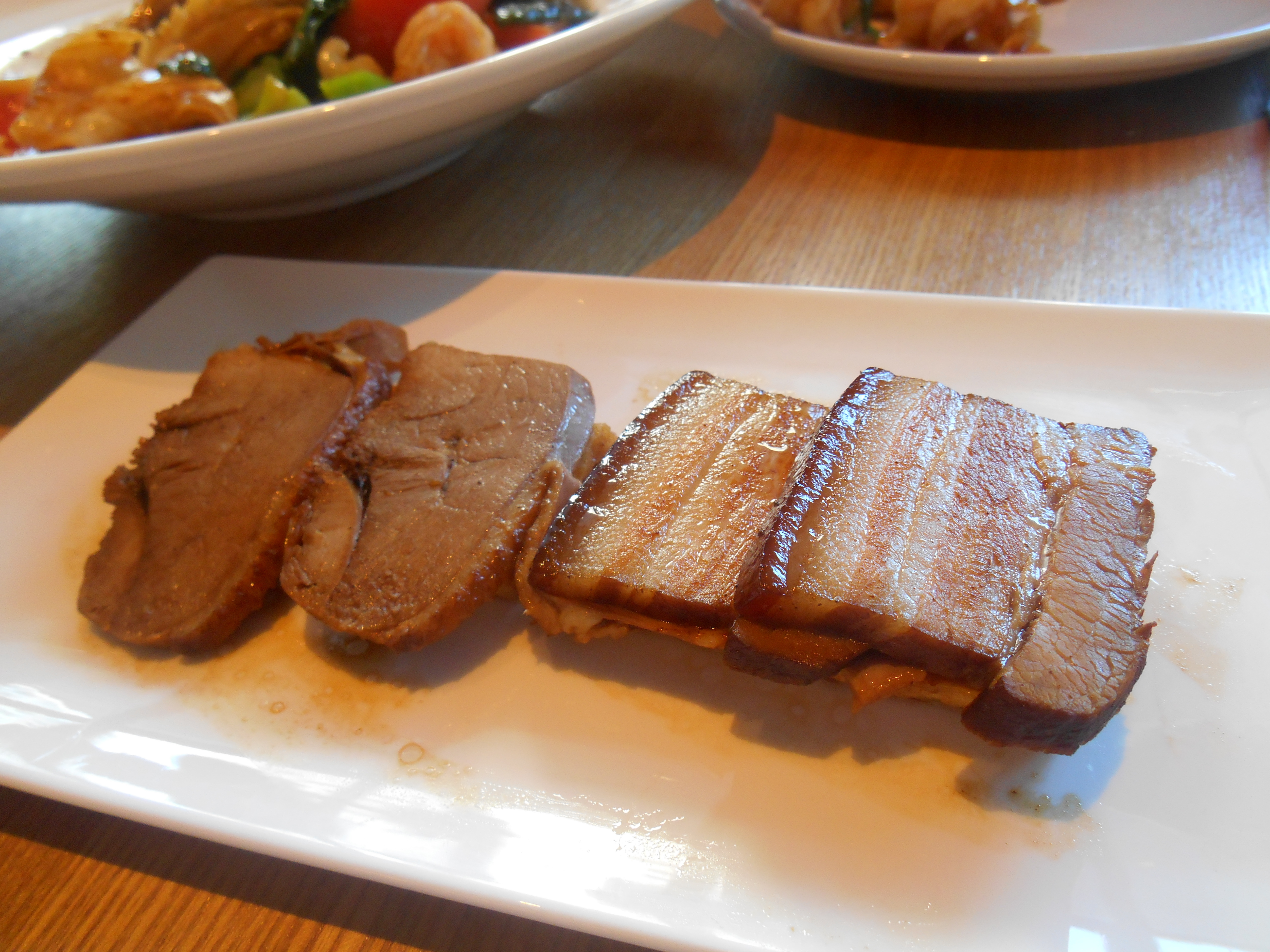 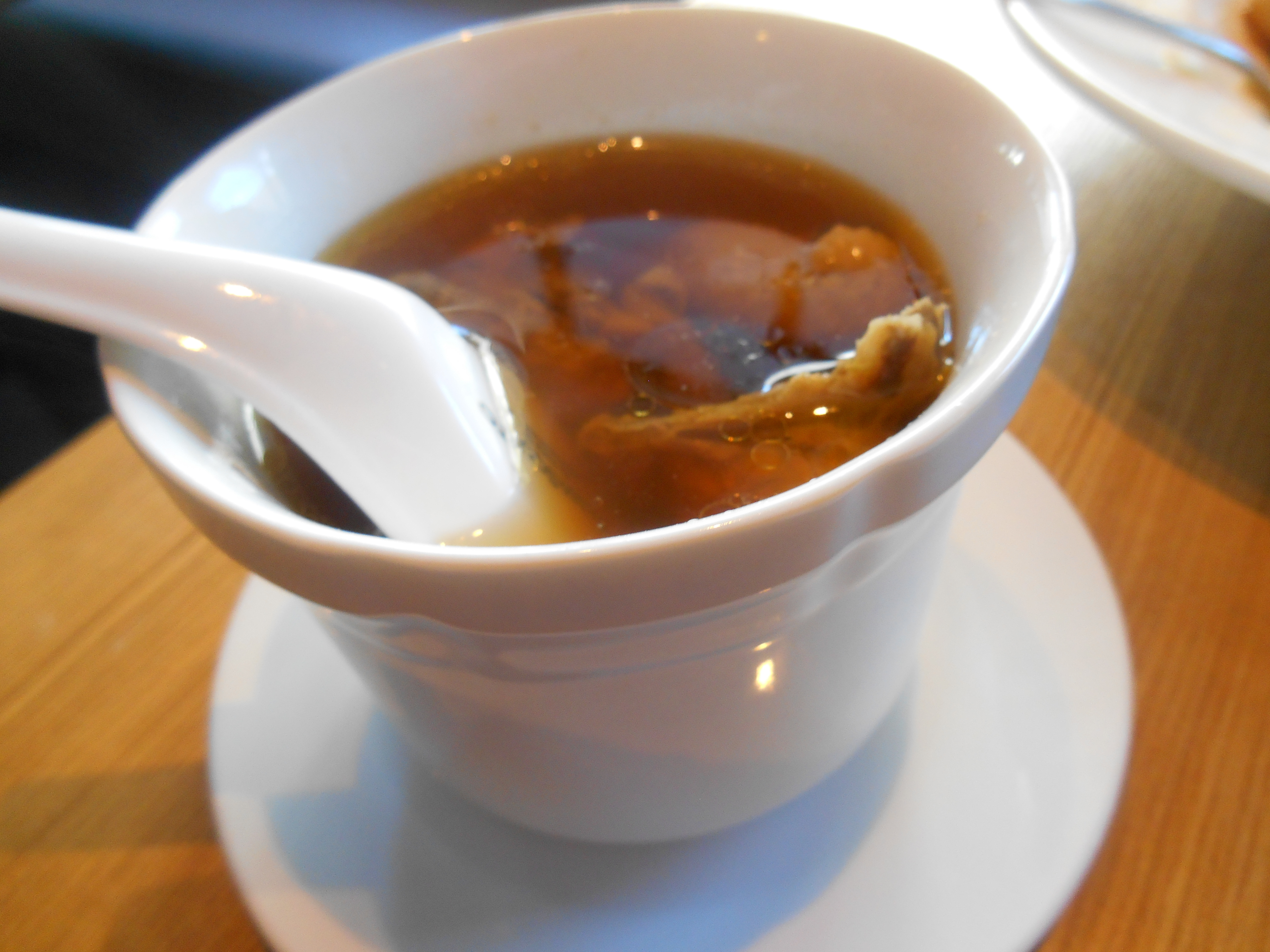 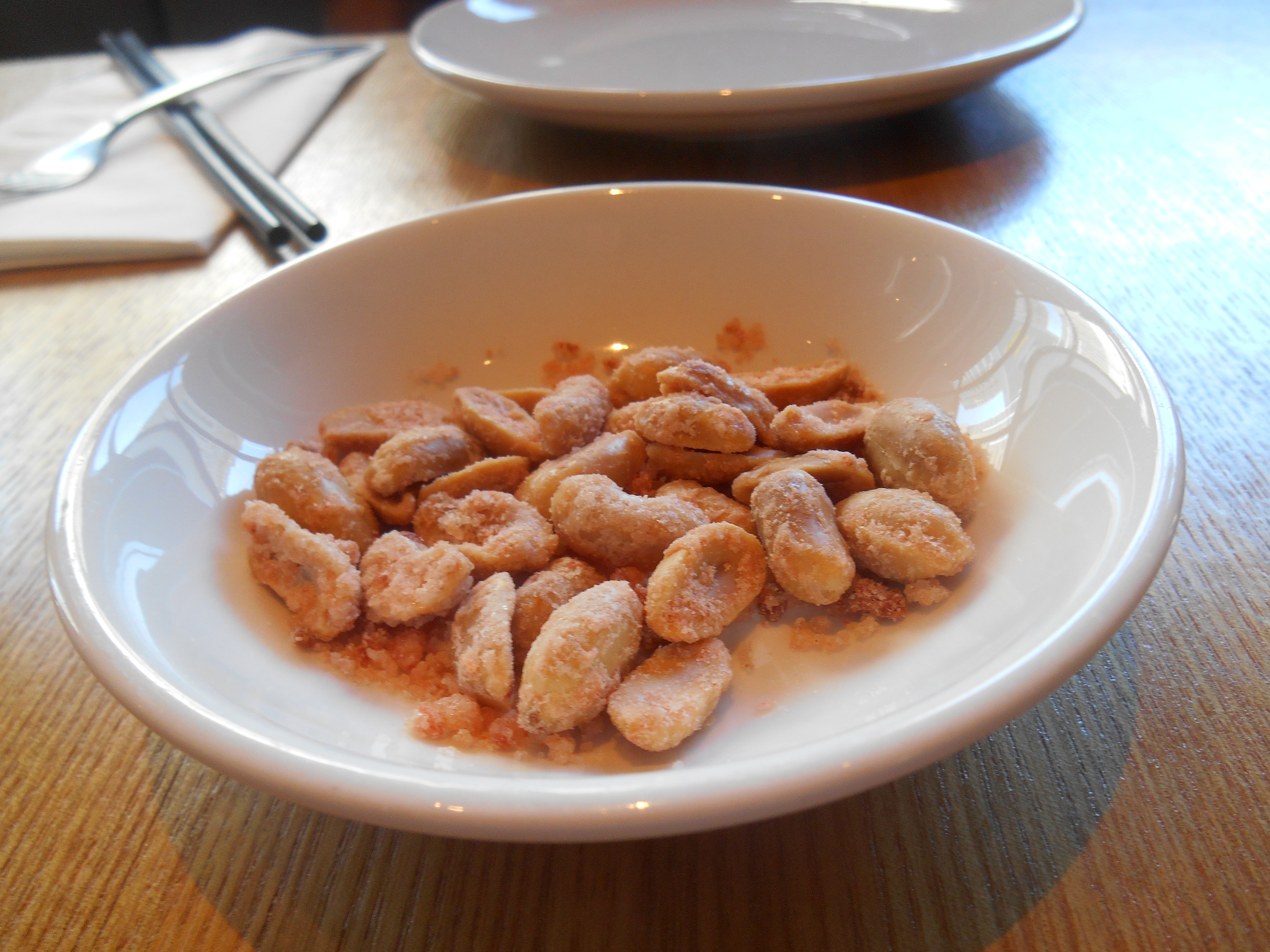 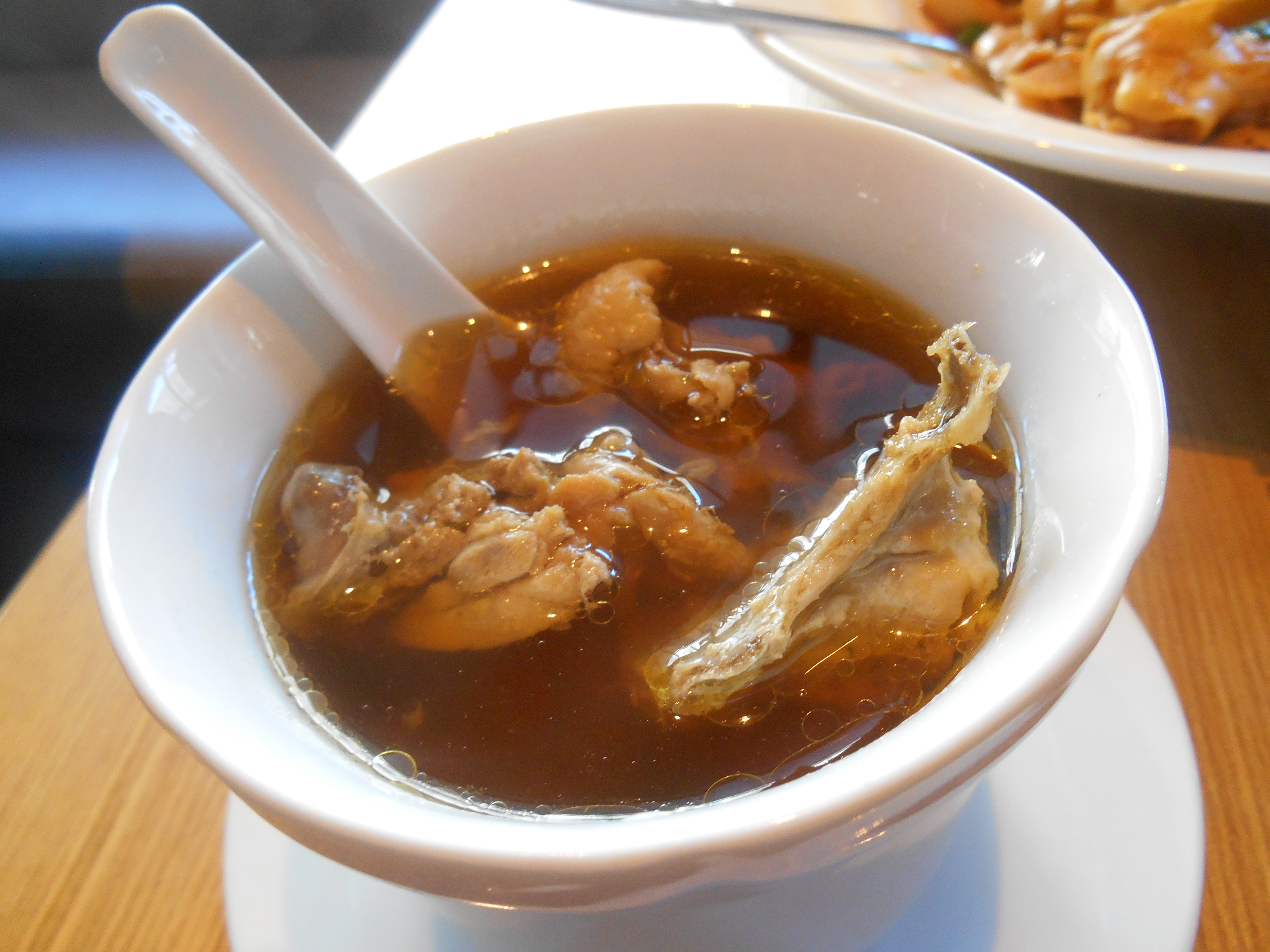 We lunched on Thursday at 11:30 am, complimentary honey roasted peanuts and the comped appetizer plate of pork belly, goose, and marinated tofu from the facebook offer which expires today; double-boiled chicken and pine mushroom soup, and the Teo Chew rice noodles with seafood of shrimp and squid. Flavors are delicate and vegetables are bright and crisp. The pork belly was succulent, the goose, rich. I enjoyed the hot broth in the doubled boiled chicken soup.
No $5 cocktails offered at lunch - the bar was closed.

Has anyone tried Teo, a Chaozhou place on Mission? That cuisine is seriously unrepresented in the Bay Area.

I’m answering my own question, for my wife and I had dinner here tonight. Context: Chaozhou food is our most favorite cuisine; when we’re in China or Hong Kong it’s our go-to. That said, we enjoyed our meal very much. To wit: we ordered the goose as an appetizer and received an entree-size portion. The poaching liquid, aka master sauce, is a little unrefined still; I guess the chefs didn’t bring their own with them. Given time it will achieve a deeper flavor. Still, it was very tasty.

The oyster and egg omelet was almost perfect, the only drawback being the size of the oysters. In China we are served tiny oysters, literally bite-size. These may be unavailable here. Otherwise the dish was as good as we get in Hong Kong. We also ordered stir-fried spinach, which was assertively flavored with garlic, a plus for us.

An unexpected plus for me was the full bar, from which I was served two very good martinis. I have a hard time thinking of good Chinese restaurants around here which offer full bar service, but then I don’t usually look for one.

I hope these folks get enough busy to stay open.

if you are looking for other good Chinese restaurants in SF with full bar service, try Mister Jiu and Hakkasan. (Crystal Jade also does but i haven’t been in ages so i won’t suggest it.)

Strange place— it being a hotel restaurant, the clientele was 90% European tourists on the Tuesday I went.

I’m not too familiar with Teochow cuisine, so would like to return with a larger group to better get a sense of the menu. 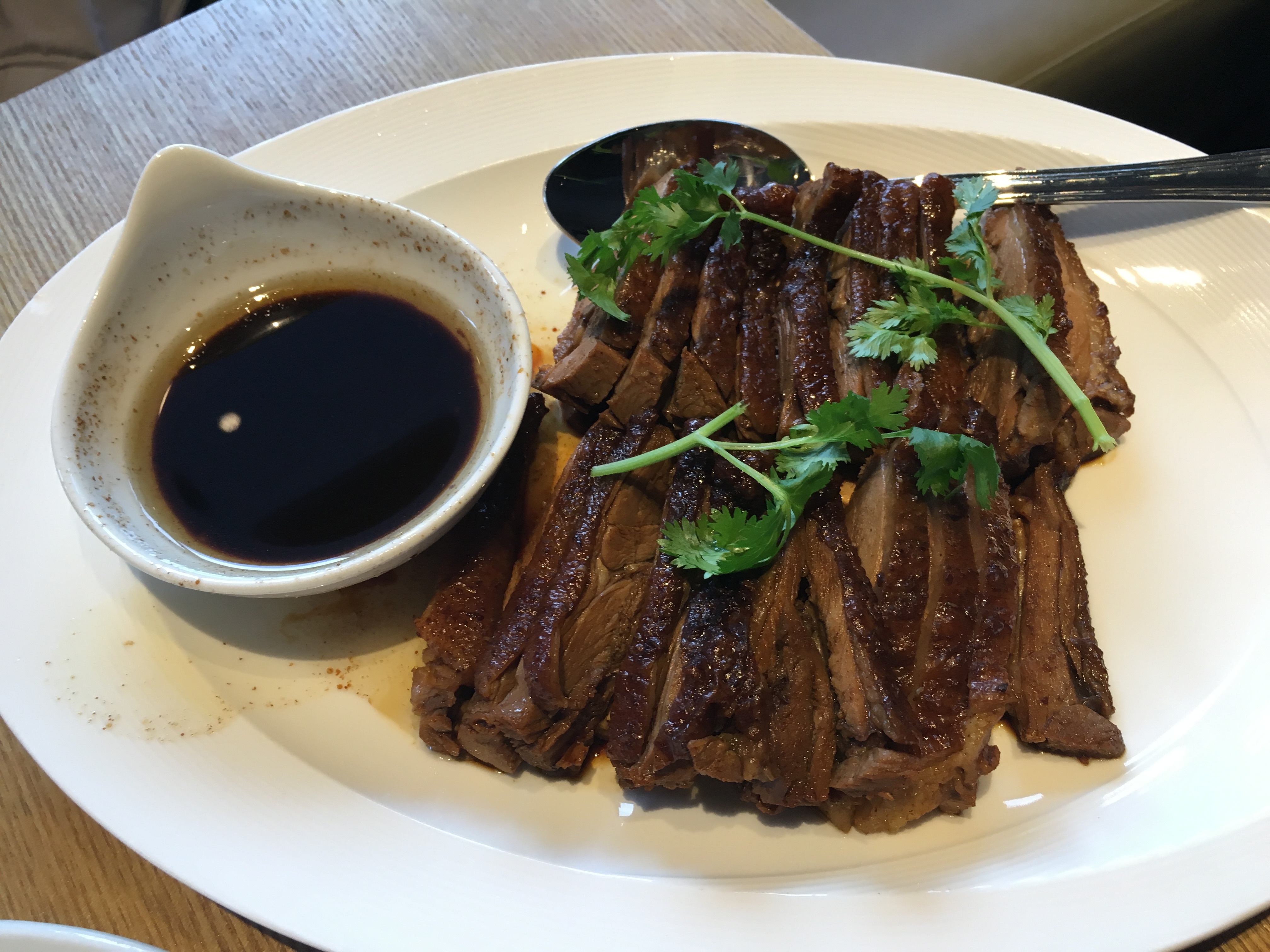 I really liked the goose appetizer. It was served with two dips— the drippings in one dish and vinegar in another, which helped cut the richness. 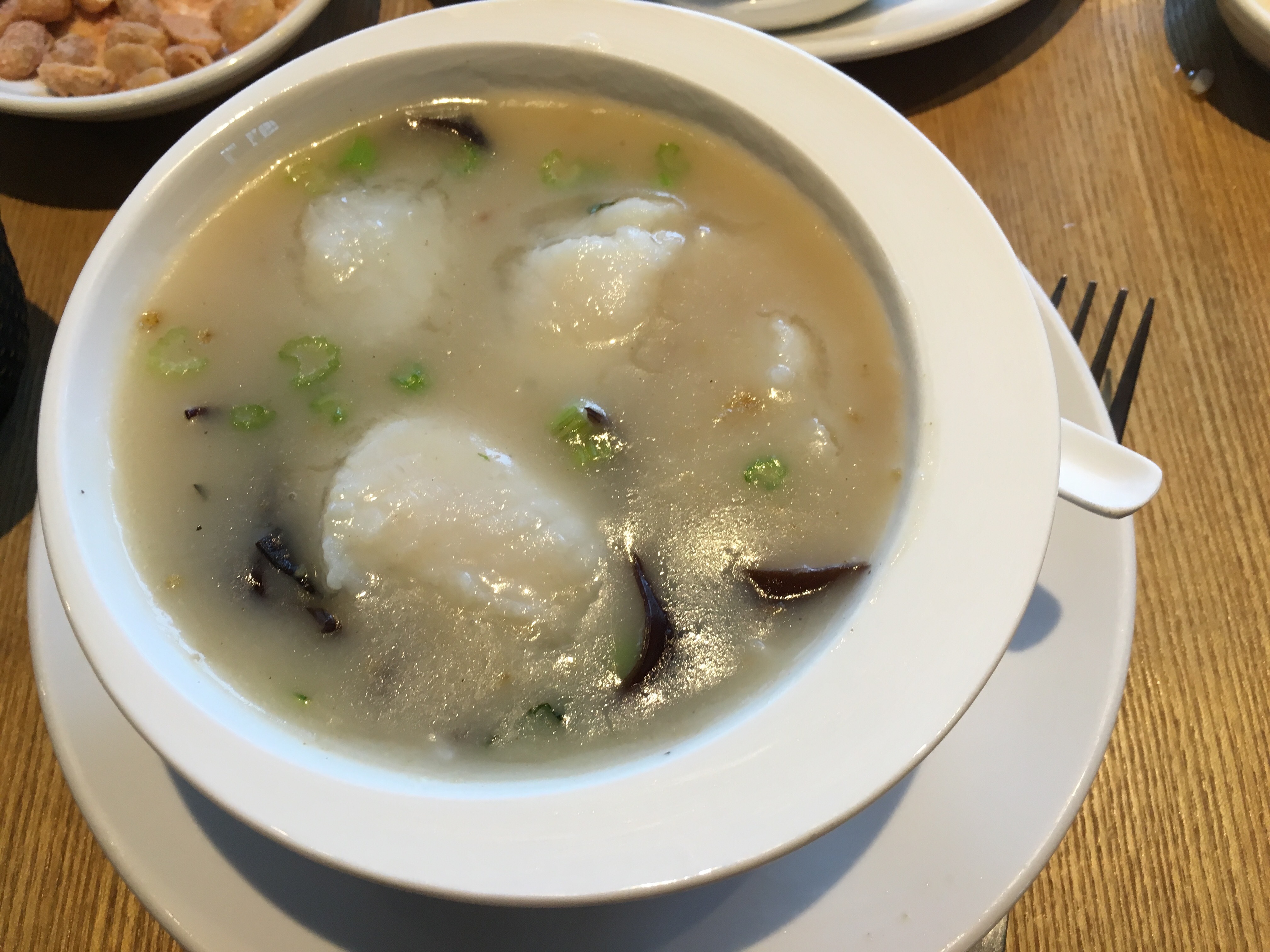 Soups are individually portioned. The cod soup, which was thickened with rice of some sort IIRC, was heavy on the peppercorns, and evoked hot and sour soup and congee. The chunks of cod were plump and clean tasting and I enjoyed the dish overall. 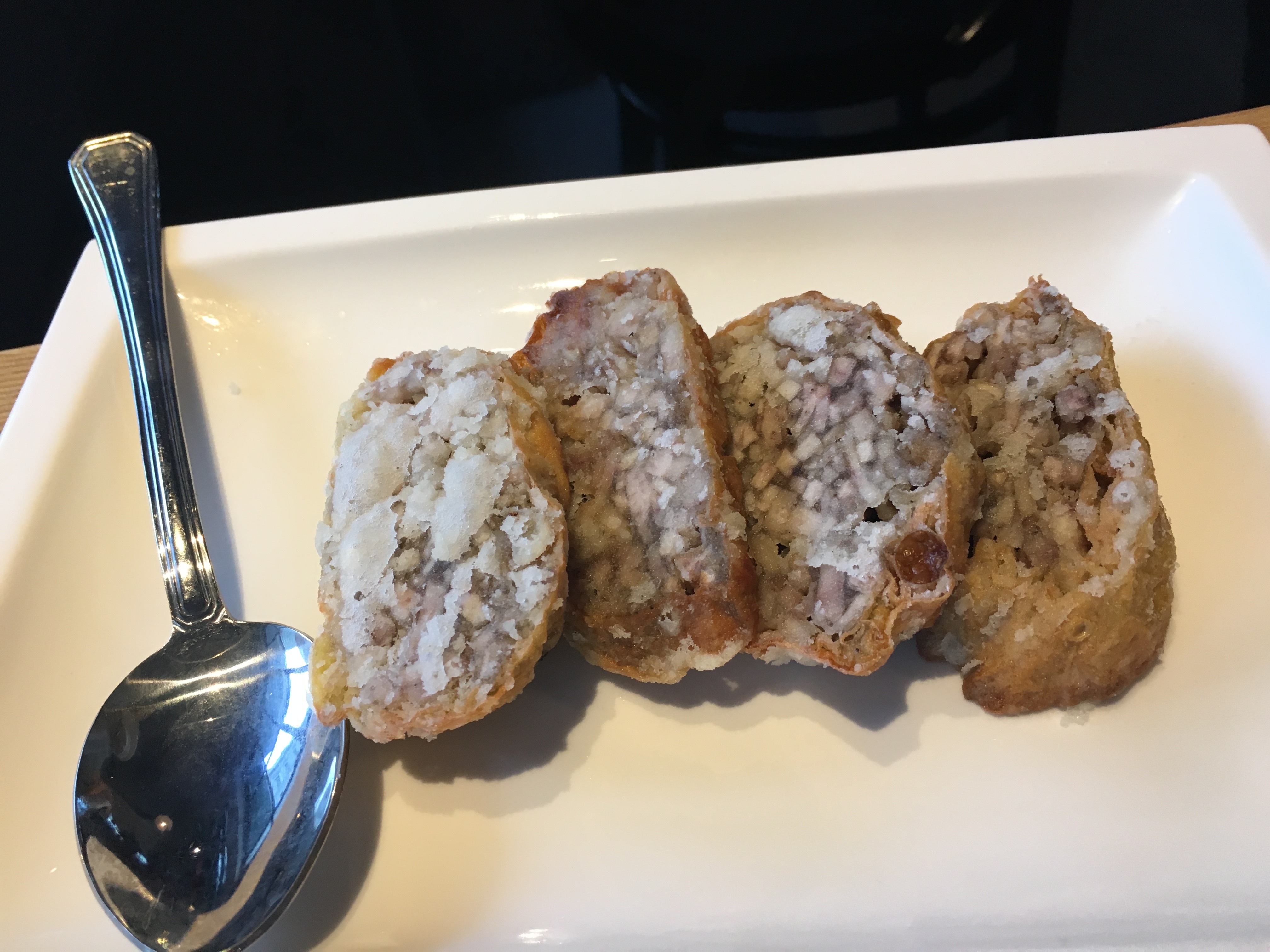 I’ve never had taro prepared in the way pictured above, so didn’t know what to expect. It could have used a salty dip— it was pasty more then crisp

The Teochow noodles were pretty good. No char, but the light flavor worked well with the crunchy slices of Chinese broccoli (gai lab) stems. As leftovers, I gussied this up with goose juices to good effect.

There’s a Kickstarter for a cookbook about Teochew and Swatow cuisine, and the author, Diana Zheng, posted a short interview with Teo’s chef. Zheng also has a good article in the Cleaver Quarterly about this cuisine.

I have this in my library. It might be available at some Chinese book stores. 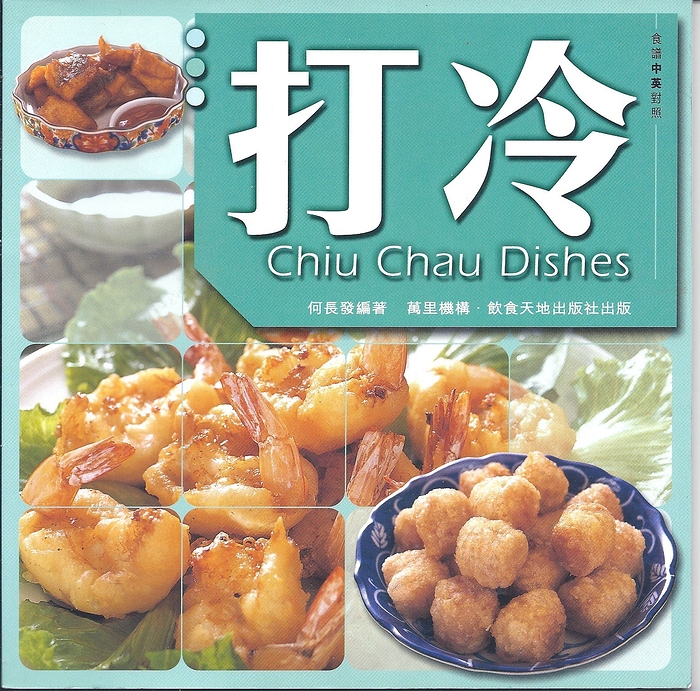 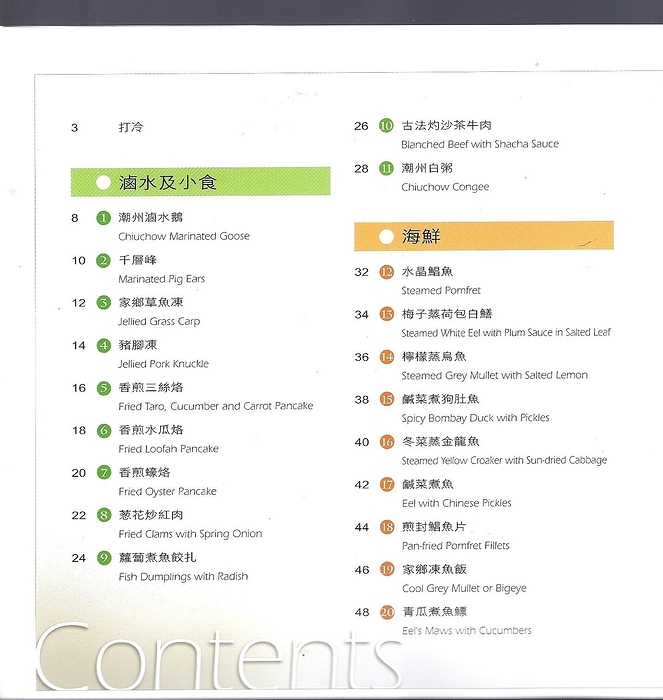 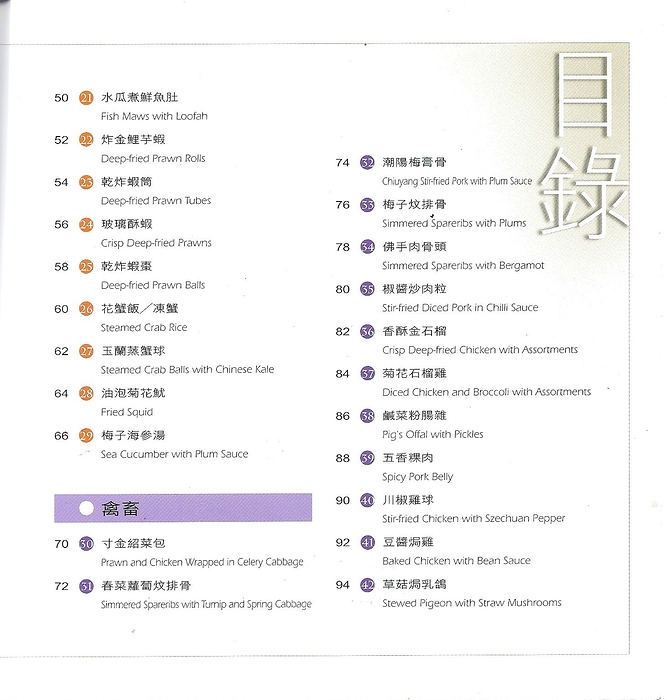 Does this book have an ISBN number? Thanks.

Thanks for the very prompt and helpful reply. I was able to find a copy.

Had another solid dinner at Teo. I think they received less credit versus what they deserve given the skills of their kitchen. Easy to get in Friday evening. Probably because of the location. And kudos to them for going all teochew in the menu, and not dumb it down. But maybe that’s part of the issue. They would be more popular if they are on Geary or in Chinatown.

The jade tofu was great- the tofu was smooth like silk. My wife and I were both very fond of this dish I will post a picture later on.

Everything else was solid.

I stopped by about a month ago and also enjoyed the delicateness of the jade tofu: 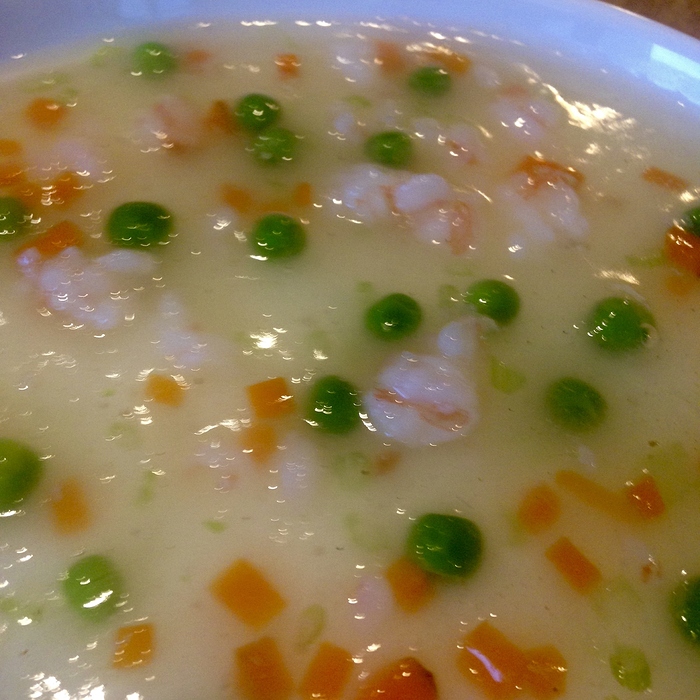 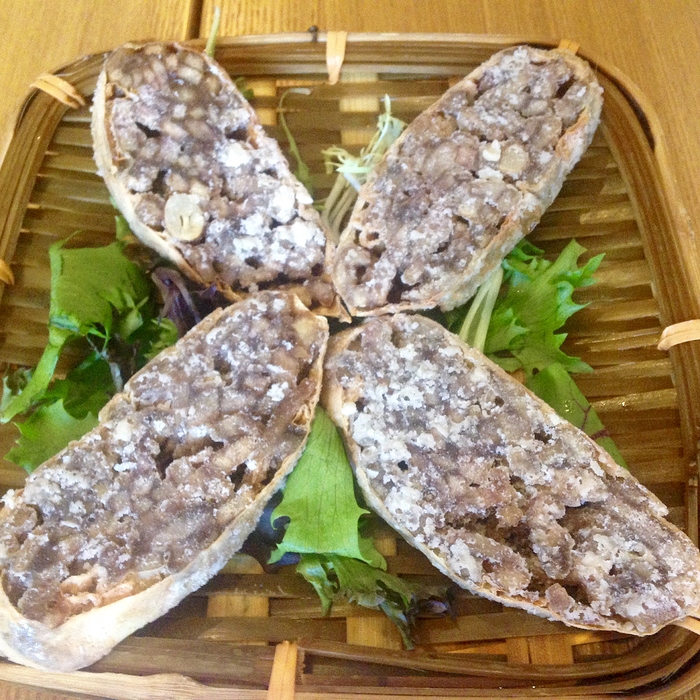 We also ordered the fried shrimp ball appetizer, which was fine but nothing special. Service was friendly and we appreciated that they had more of a beer and drink selection than most Chinese restaurants.

Now that you brought up the peas and carrots, I must profess I was too busy devouring the tofu that I didn’t even pay attention to the stuff sitting on top.

I am curious, has anyone tried their rice noodle porridge (that they claim they are the only one doing it in Bay Area), the oyster porridge, or the fish balls? If so, how are they?

I’ve only been once and ordered the jade tofu as well, but I thought the tofu was lacking and it was all about the egg white custard on-top… perhaps I was too busy eating the custard and didn’t dig into the tofu until it got cold. Neither texture or flavor of the tofu underneath were great - not silken and not well flavored. I was there late, maybe an ingredient sub? Maybe an off day?

Not sure if temperature makes a difference. The other thing that I remember is that I ate them while it was real hot.

And they have teochew congee! Not a frequent sighting, at least for me, in the Bay Area.

Finally tried the oyster congee. Its thicker and less watery than the usual Chiuchow congee, so its closer to the texture of a typical Cantonese congee. Oysters cooked just right (i.e. just cooked) and some dried fish for a change in texture. I couldn’t figure out what’s in the congee base. Decent rendition, though there are better back in Shantou / Hong Kong. 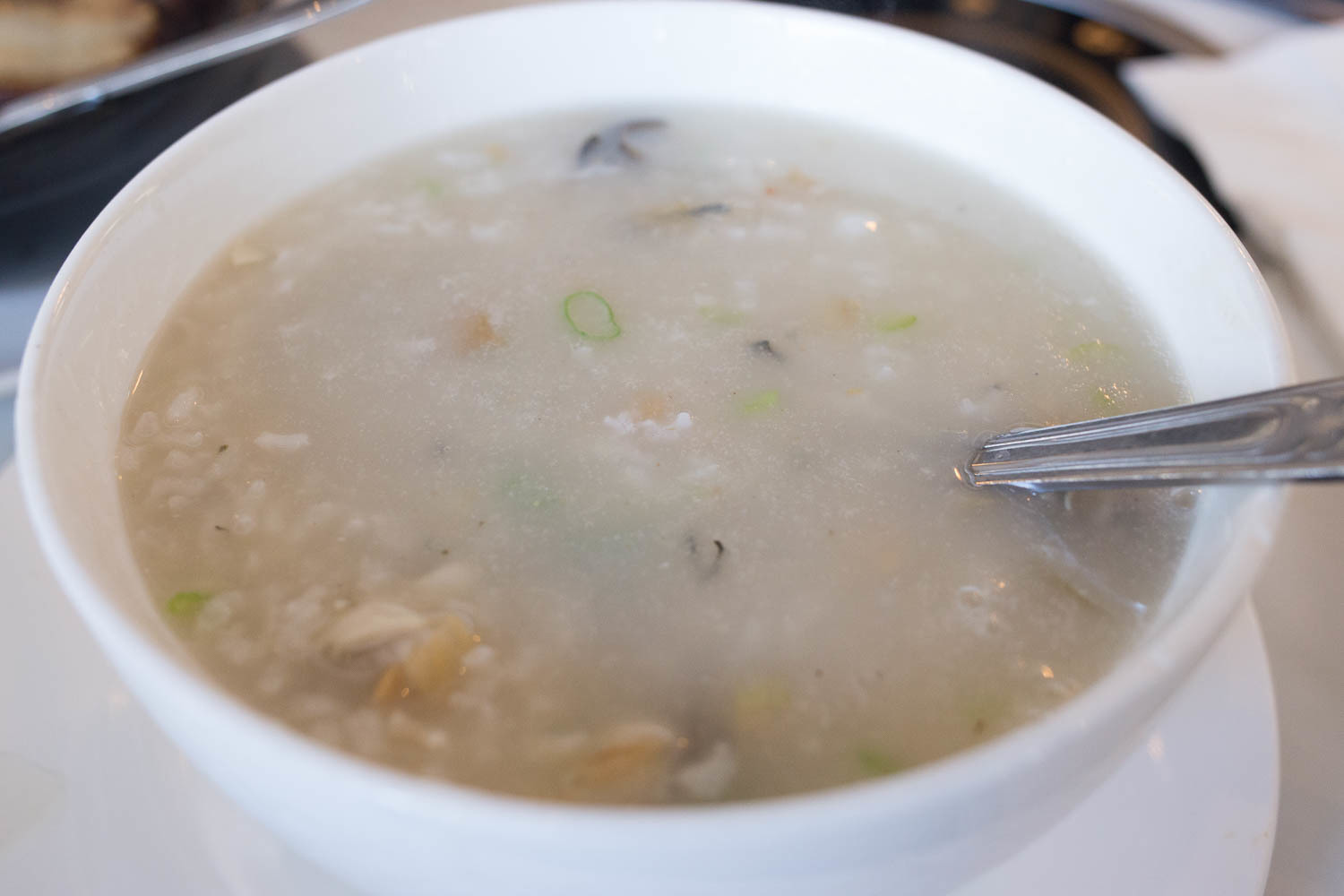 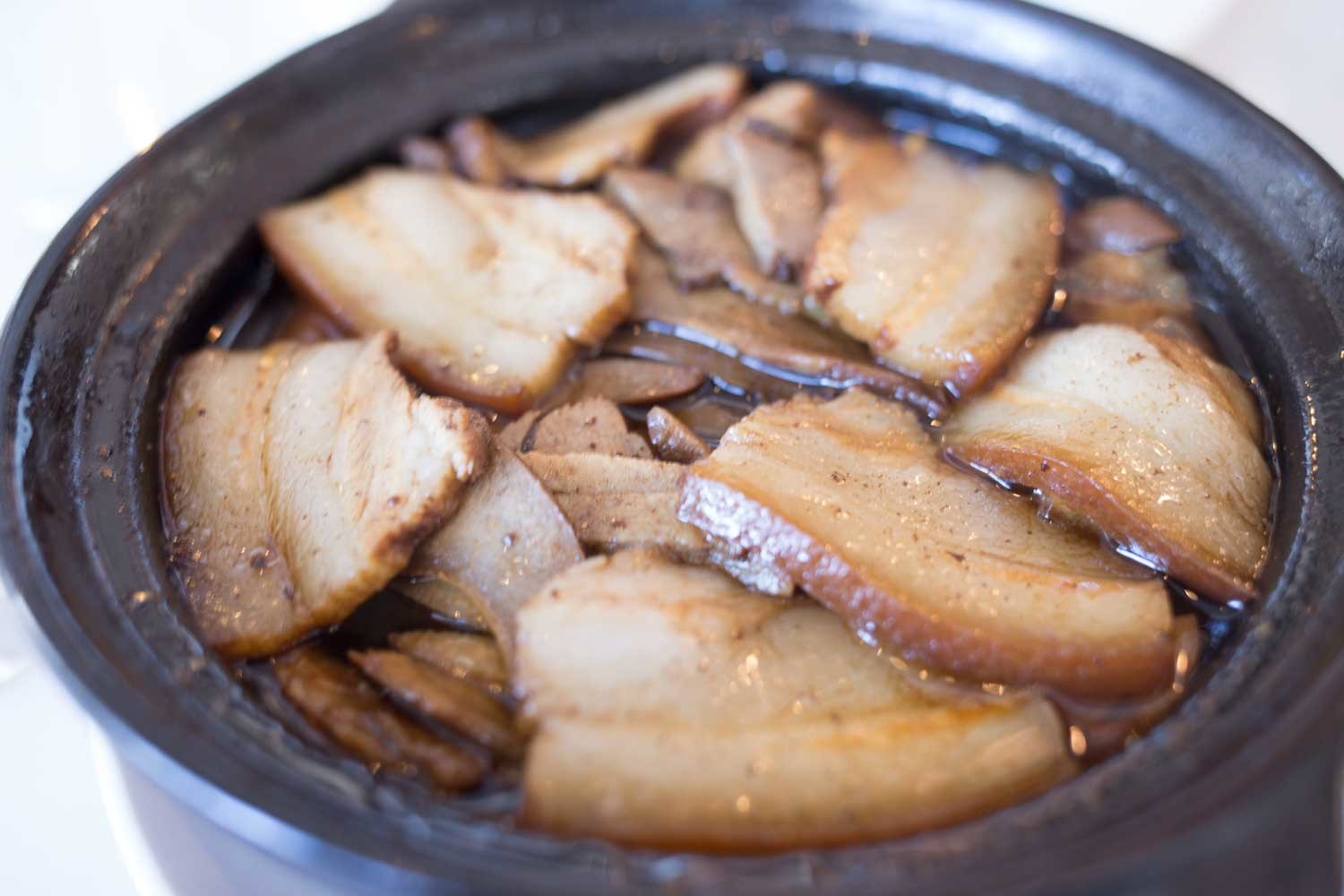 into this thickened bowl of rice noodle. Strong soy marinade. 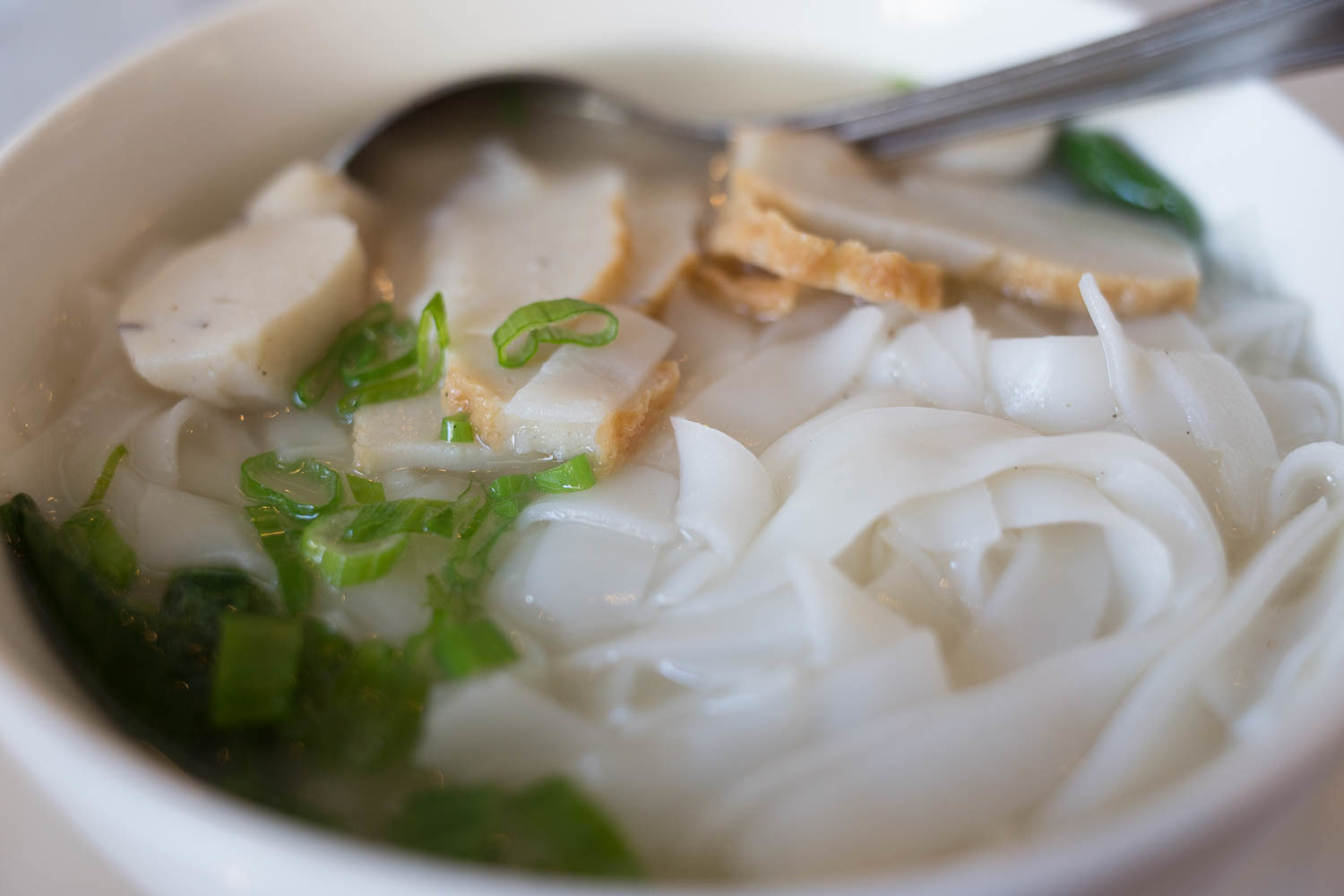 At some point we were the only group in the restaurant. It certainly could use more love. They got inductive stoves on some tables now. Wonder what those are for.

Unfortunately Teo is no more. The windows are all covered by paper.

I thought they were pretty interesting, just not in an convenient location imo. Think they depended more on office workers and everything