"Tell Consumers What They Are Eating" - NY Times

I’ve always been generally in favor of “more”. Information on product labels is one, important example (as are vodka in a Bloody Mary, jalapenos on a plate of nachos, and passed hors d’oeuvres at fund raiser dinners) . As I’ve stated elsewhere, “I’d rather read a package label that resembled a 10-K filing* than one simply stamped ‘MEAT’.” That being said, it’s probably no surprise I agree with the Editorial Board on this piece.

The F.D.A. said there is no reason to mandate labeling because there is no material difference between engineered and natural fish on qualities like nutritional content. But the value of that information should be left to consumers to decide. 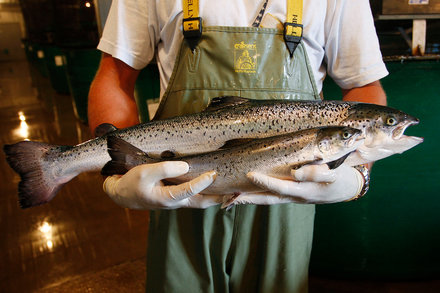 Opinion | Tell Consumers What They Are Eating

Congress should overturn the Food and Drug Administration’s decision not to require labeling of genetically engineered salmon.

I am not a fan of the trend to put less info on labels. It’s really just the result of special industry lobby groups. Whether it’s GMO or Country of Origin, just put it on the label. My underwear says where it was made, I don’t thing asking where my ground beef is from is asking too much. It's harder to find out where your beef or pork was born, raised and slaughtered following Congress' repeal of a red-meat labeling law.

This reply for the win! Thank you.

I hope this does not apply to fish, where the country of origin is of even more importance than for beef. (This is because we import fish from countries with much more questionable farming/fishing methods than we do beef.)

every time I hear a supplier argue against Cof O labeling or labeling food that contains GMOs, I can’t help but wonder if they are trying to hide something.

If you’re confident of what you’re selling, you shouldn’t be afraid to tell people what it’s made of or where it comes from.

Tell me what’s in that package and let me make the choice.

I’d say factory farming of beef cattle is pretty much just as questionable as farming/fishing methods in other countries. #ssdc

I hope this does not apply to fish

At this point, those laws have yet to be repealed. The chicken labeling requirement was almost lost, and is likely to be the next one challenged.

just put it on the label.

In more recent reading on the matter, I came across this statement from a Member of the House of Representatives:

“Mandatory food labeling is not about food safety,” [Dan] Benishek said. “No matter where our food comes from, regulations remain in place to ensure safety and traceability regardless of origin.”

I’ll admit, I had to stifle a weird laugh. Our food safety system is very much dependent upon consumer awareness. Funding to both the FDA and the USDA has been consistently reduced, and neither agency is adequately staffed. In fact, the USDA has been shifting the pork inspection processes to the producers. The Congressman’s statement is technically true - the regulations are in place - but, for lack of better examples, so are immigration laws and firearm background checks.

The use of the Budget Omnibus to repeal COOL may be a recent development, but none of this is really new. I just noticed that I posted the following about a year ago in the old place:

In this case, we have a basic regulatory system which puts a significant amount of the burden for food safety on consumers. A political climate that is championing reductions in regulatory budgets and allowing the increasingly loud voice of industry to dominate the conversation. And, an industry (meat production in general and, particularly, pork production) that is near monopolistic and, simultaneously, tax-payer subsidized.

Now, I’m not saying that this is the end of the world, and frankly, on a personal level, it’s not going to change my consumption patterns in any significant way. It is, however, part of a troubling trend that deserves attention at a level below activists and financially-interested parties. I think it’s fair to start asking the question, Do we as consumers want (or trust) industry self-inspection? I’ll let Upton Sinclair answer the question for me.

I suppose I should have also been asking, Do we as consumers want (or trust) Congress to determine what information we’re capable of processing? I mean, I’m beyond confident that I can handle more than either Benishek or his co-sponsor, Ted Yoho.

I don’t think it applies to fish. The lawsuit was filed by meat producers in Canada & Mexico. It’s based on some NAFTA issue.
But the fact that it is not uniform code shows how ridiculous the idea is. Not being able to label food is just mind blowing. It’s like saying my doctor must never disclose his credentials!!

And we all have learned painfully, Free Trade Agreements are not “free”.