So, they’re on the road to Santa Barbara. First stop is the ocean to get uni. At least they just get it handed to them . . .no crazy catch-your-own nonsense. Then it’s off to a vineyard where they are going to pair uni and wine. One chef (it’s early and there are too many chefs to remember) hasn’t had a drink in over a year, just reads the notes. A few of the others seem to have not tasted the wines either. Grayson reveals her boyfriend is a sommelier. Anyhow, it’s an elimination QF we’re told. There was some good, some bad. And Grayson wins immunity!

Then, the bottom and it’s Giselle. Except it isn’t. She doesn’t get eliminated. Some funky thing about she gets to pick another chef to go one-on-one with. She picks Angelina, Angelina loses and so nobody is eliminated. WTF waste of time was that?

Elimination challenge is surf and turf. Chefs pair off and prepare a surf and turf dish as a team. Grayson will cook against whatever team she chooses. There’s a mad dash for the proteins and the obligatory visit to Whole Foods. They return to the very nice, very large kitchen at the resort. Tome enters to deliver the twist: It’s now a surf vs turf challenge. The former teammates are now in head-to-head competition, with one preparing surf and one turf. The loser of each is up for elimination. They serve a large table of notables such as the owner of Beast and Richard Blais in a gorgeous setting.

Nice job on the write up. It was sad to see two great dishes go head to head and one of them lose. I did think it was weird that the three best dishes were all Surf.

I meant to mention that Surf weirdness. I found that odd too.

If I remember right, last year’s QF Eliminations also had that failsafe, where the losing cook could stay in. In fact I seem to remember Gregory being the first one facing it last year and saving himself.

Oh, no, George Pagonis challenged Gregory and Gregory won, so George was eliminated (but was brought back later in the season). Thanks Wiki!

I want to rag on Grayson for “stepping up her game” with an uni and grapefruit salad, but for once simplicity was the right call. And with full control of her ingredients she damn well better have won the face-off, if not the overall competition.

It’s ok Padma, I didn’t get any fish either.

Blais’ comments weren’t as overbearing as last season (but I do remember at least one bemused smile from Tom as Blais was asking about competitive strategies). And he was right that too many chefs were claiming time issues. (In the case of the missing rock cod, it was an organization issue; she just lost the damn fish.)

Mostly looking forward to the inevitable episode where Kwame fails miserably and begins his road to redemption/Top Chef victory.

LA Magazine has called Grayson this season’s Josie. So cold. 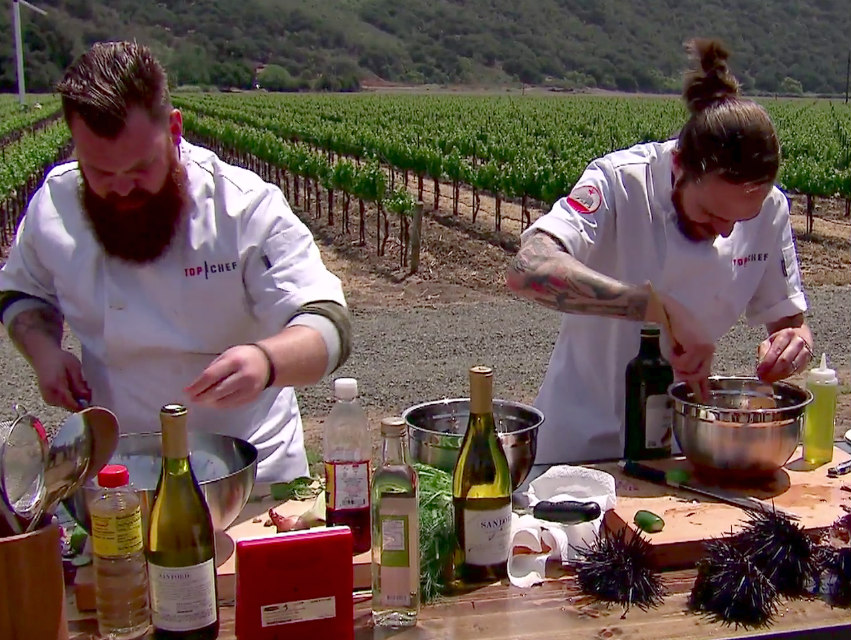 The cheftestants take on Santa Barbara

That’s just wrong. Grayson has been a downer this season (until episode 3) but she can at least cook. Josie? Bad tude and couldn’t cook.

Good job, gaffk!!! I was glad to see Grayson lose the attitude and start cooking!

Thanks. I finally watched it Friday evening (yes, I completely forgot it was on Thursday night - the switch of nights really screwed me up).

Suzanne Goin was also as the Elimination Challenge dinner table. And yes, they had that QF challenge cook-off last season as well.

I thought Richard Blais’s comments were good this time. Grayson wasn’t as much of a PITA this time (and at least this time she cooked some good food). And there’s no way in HELL that Grayson should ever be compared to Josie. Josie was a liar and couldn’t cook her way out of a paper bag.

Oh - and what was Dooshnozzle Phillip trying to say to the woman who gave them the uni? He was definitely trying to schmooze and show off to the other cheftestants that he knows everyone in the area.

And I still think if they’re going to have an elimination QF someone should actually be eliminated.

That QF elimination thing was completely edited out in the version broadcast by Food Network Canada.

Grayson’s getting better. Really liked her the first time round but in the first two episodes of this season she was a real whiner.
I have yet to be really impressed by what they are calling the best group of chefs ever on Top Chef…but don’t they say that every year?

They do say that every year!! But I have to say, for some reason , I am enjoying this season. Maybe I just missed it!