Afghani grill and butcher place in a Milpitas strip mall. The families of a couple gentlemen who work there were originally from Kabul but they were born and raised in the Bay Area. Anyway on the food: they specialize in grilled halal kabob meat. They have rotisserie chicken and burger as well but we didn’t try those.

I asked them recommendations for the kabob, offered in ground meat version (chili) and cubed meat version (tikka). For chili, they recommended the beef. For tikka, they said all 3 were good. So I ordered the beef chili kabob and the chicken tikka kabob. The kabobs came with pilaf, salad, and bread (looks like pita). Their website says they sell afghan bread but I didn’t see any on the menu.

The kabobs that arrived were beef and chicken tikka instead. So I will have to try the chili beef kabob next time. Beef were grilled medium well. Both beef and chicken were slightly spicy and seasoned well. Both were very moist and tender. The pilaf was cooked to a light fluffy (and less wet) texture with sumac sprinkled on top. It tasted good by itself but tasted better when mixed with the juice from the meat and the salad together. Salad had tomatoes, cucumber, red onion and herbs.

Free baklava when checked in with certain eating apps. We took advantage of that. Normally $1.29. One of the cheaper baklavas around, aside from the wholesale outlet of Oasis in Belmont. They had two kinds. Free Afghan hot tea.

Small eatery- A few small tables. Ordered at the counter and they brought the food. Butcher counter inside the eatery. Friendly people. There’s one of these in Union City as well.

The SF location has been closed for a couple of years (replaced by a Korean place). Perhaps they moved to Union City.

Tayyibaat’s food is still going strong. The grilled meat was flavorful and succulent. As with many other restaurants, they could use a bit more business these days. 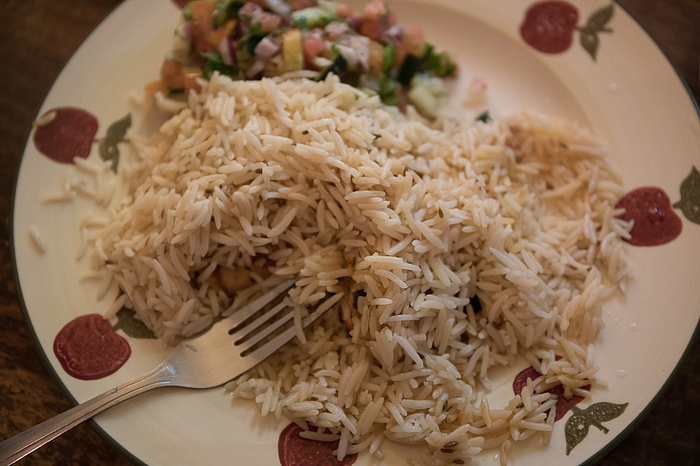 I flipped the container upside down onto my plate so the kabob was hidden under the pile of rice. Its there.