I was at TJ’s on Westheimer before Thanksgiving and noticed this one again right across Westheimer. I had forgotten about this place and had never written it down.

The menu says they’re serving Uzbek, Turkish and Uyghur Halal food while Yelp describes it as Halal Mediterranean and Asian Fusion. There is actually only one dish from each of those three cuisines labeled as such on the menu - Uyghur pizza, Uzbek salad, and Turkish Burek. 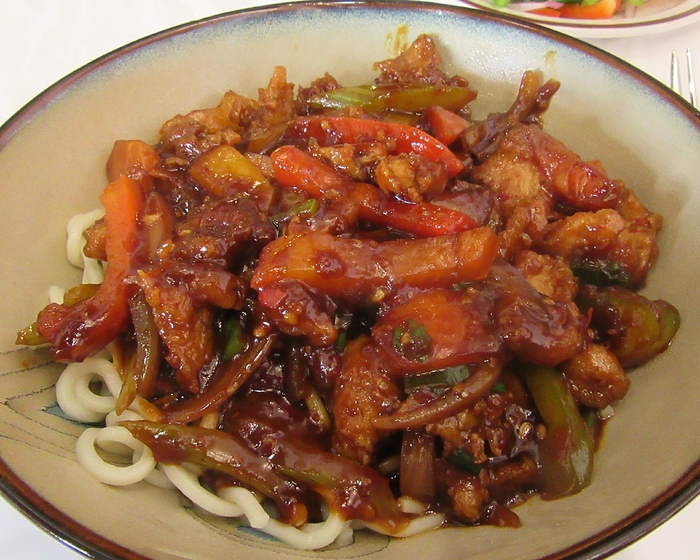 I went with the dish that was seemed most similar to the first dishes I had at Uyghur Bistro and Afandim, just labeled Spicy Noodles here. This was the Lunch Special portion with both beef and chicken pieces, peppers, onions, tomatoes and spices in a spicy gravy on top of wheat noodles. The bowl had been heated and the dish was very hot and stayed that way well into the meal, a plus; the gravy was quite spicy but there was no evidence of the mouth-numbing Szechuan peppercorns as at Uyghur Bistro. The noodles were very uniform. I guessed they were machine made but didn’t ask if they made them in-house. I liked that the gravy clung to the ingredients instead of pooling in the bottom of the bowl as in the version at Uyghur Bistro but the noodles weren’t as impressive as the hand-pulled noodles at Uyghur. 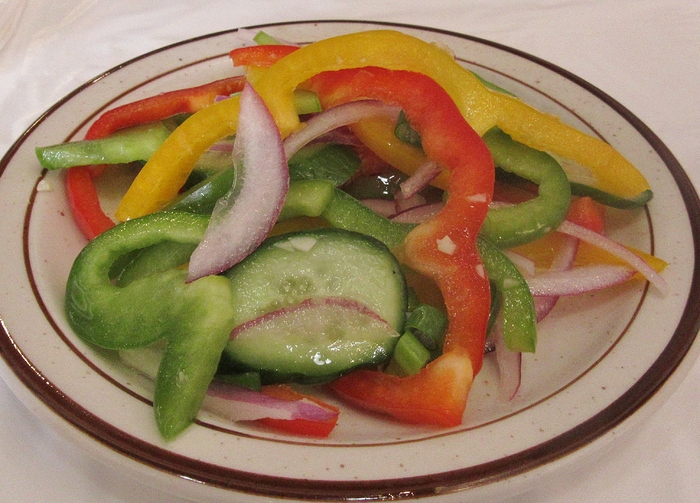 I inquired about the two soups but passed on them and ordered the Uzbek salad. The online lunch menu lists combo plates but the in-house menu just offers entrees and you have to order a side and beverage separately. I had no knowledge of Uzbek cuisine and was kind of surprised to see the only dish on the menu labeled as Uzbek was a salad; I was very pleasantly surprised by this - crisp bell peppers, cucumbers, red onions and chives dressed with lemon juice and a dash of olive oil, a refreshing counterpoint to the noodles. The menu said there would be tomatoes but there were none; the mealy, tasteless tomatoes available this time of year would not have helped this salad. When I got home and started nosing around on the interwebs I found this is a variation of an Uzbek dish called Achikchuck. I was charged only a dollar for this side. 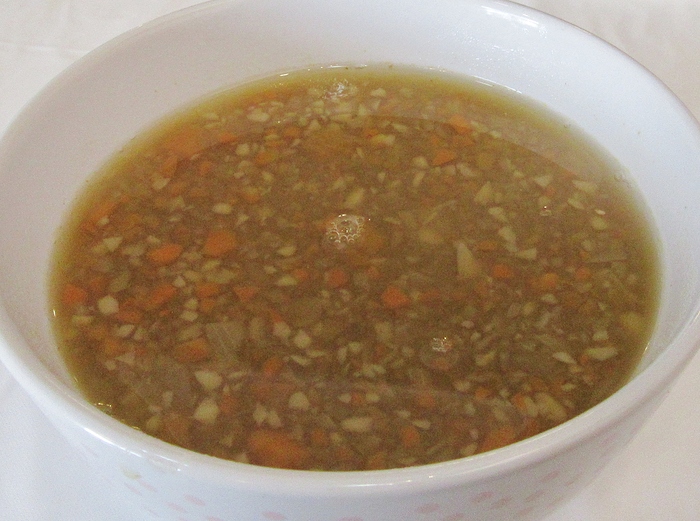 I was just getting started when the waiter returned with this complimentary cup of the Lentil Soup - brown lentils, carrots, and Bulgur wheat (I think). I had a mild kick to it and was pretty good. It was not a clear soup but it wasn’t thick; it was hot at first but the bowl had not been heated like the noodles and it cooled off to room temp before I got around to finishing it - it was the least interesting thing on the table. It was much better hot than at room temp. This reminded me of the Turkish Ezogelin soup, which is made with red lentils.

There was a large cruet of hot sauce on the table. I was satisfied with the heat level of the dishes as served so didn’t add any; it was vinegary, possibly a bottled sauce rather than one made in house. As I was waiting for my check I noticed a small pot behind the table card that might have held a chili paste or perhaps sugar - I didn’t reach across the table to sample it at that point.

The room is very simply decorated; I did think that perhaps, unlike Uyghur and Afandim, they had removed all traces of decor from the previous tenants and added their own touches but I have no idea what was in this space before.

I was sure I recognized the waiter but couldn’t place where I’d seen him before - perhaps he was one of the waiters I had encountered at Uyghur Bistro.

I had the place to myself when I got there at 1 pm but by the time I left two families had come in, one with two small children and one with a son in his early teens. I guessed they were ex-pats rather than foodie families looking to try something new. There was also a blue collar worker who had come in and was perusing the menu standing up as I left. There’s a Subway on one side and Hank’s Crawfish on the other.

I have also learned there is a Silk Road Grill on West Rd., just outside the Beltway. It has things like gyros, doners and falafel plus Uzbek dishes like laghman and pilov/plov, the Uzbek national dish. I’m going to have to try that one, too.

The spicy noodles (laghman) at Tarim sound a little more authentic than those at the other place you mentioned. I don’t think Sichuan peppercorns are typically used (at least in the several versions I have tried), and the sauce is usually more of a pasta sauce consistency.

Thanks for the info.

Didn’t take long for Houstonia to find it. 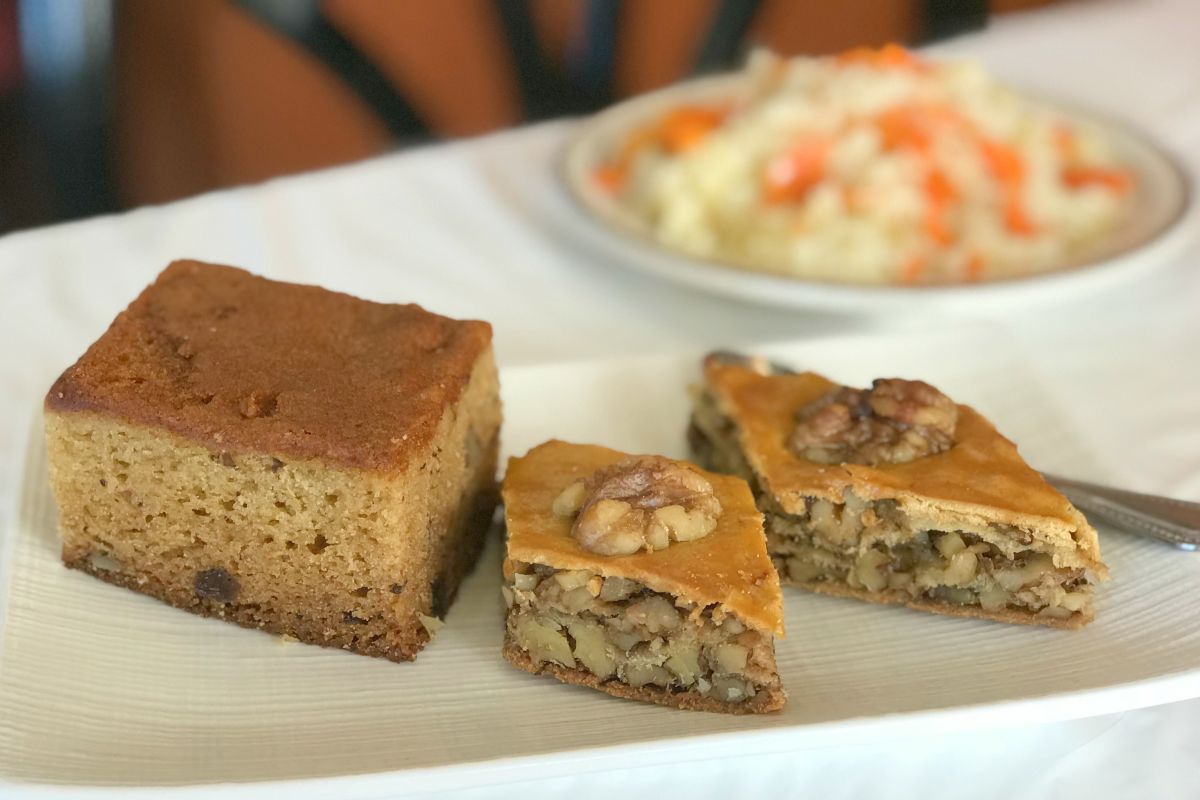 From bread to dessert, this new Uyghur restaurant specializes in homespun comfort.

Already gone and a Dona Tere Tamales opened in its stead.