Dropped by this intriguing Cantonese style Noodle House a couple weeks back to see what it was all about.

Arrived on a weekday close to noon, and managed to grab the last parking spot in the plaza. 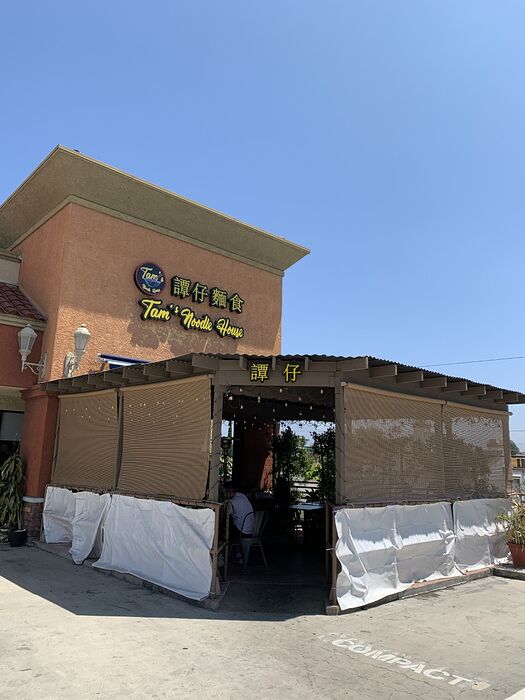 They have several covered outdoor tables, and indoor dining (with air conditioning) was available. I opted to sit down to beat the 90F heat.

There were so many choices on the menu. The setup is more like a Cantonese won ton themed noodle shop, along with lots of other Hong Kong cafe offerings.

Online reviews suggest that the most popular items are either won ton noodles, steamed rice rolls, or wide egg noodles lo mein with wontons and beef brisket. However I did a little more research and asked the waitress before deciding. As I had a late breakfast earlier, one order of noodles was all I could handle.

I ended up with thin/regular egg noodles, with won tons, and fish paste, with broth on the side. What’s interesting to note that is not explained with enough detail on the menu, is that the noodles are all made in house (I did not press if the noodles were pressed/kneaded with bamboo pole). There are actually three types of noodles: the regular thin egg noodles for noodles soup, which are actually made with duck eggs according to the waitress. Then for brothless noodles or lo mein, they have noodles that contain shrimp roe, and come in thick/wide noodles, or thin.

The fish paste has very interesting fluffy texture, and was fairly smooth (not so easy to pickup with chopsticks), alongside some herbs or seasonings. So this is more about enjoying its texture… some old school Cantonese shops might use this as a filling for steamed rice rolls, and other dishes may involve steaming it with tofu. It’s an easy boneless dish for children and elderly too. The fish paste otherwise is fairly light, but could use some additional table side seasoning to make it more enjoyable. 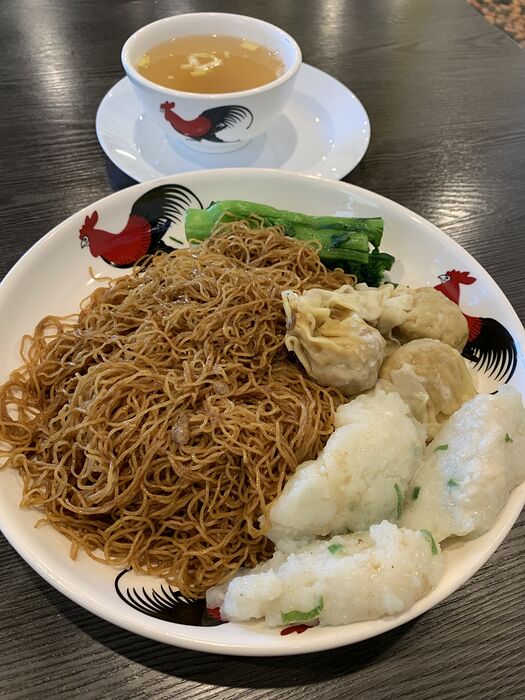 The wontons were on the large side, and seemed to lean more with heavier ratio in pork than shrimp. These were just ok to me and otherwise would not pass muster for Hong Kong expats that crave the traditional version.

The noodles however, had excellent texture. The reason why it is darker than normal is not just because of the addition of the shrimp roe in the noodle making process, but they also add soy sauce and vegetable oil (in lieu of the traditional lard) to toss the noodles together. This has the effect of masking the fresh noodles, which are made with alkali water. One big problem is that if you put your nose up to the noodles to smell, even with the seasoning, there is that signature strong smell that is very Windex like (eeeek), so I would advise not to smell the noodles if you can. The noodles came out very warm, and at least the soy sauce flavoring and seasoning was just the right level of sweetness…but in hot weather this can be a little bit overbearing over time. The portions are very generous I must say. I barely finished everything.

The side of broth does have dried flounder, but in powder form. Interesting it is a very clean broth, with just some young yellow chives. Surprisingly I was told there was no pork nor chicken base. It worked quite well.

If I remember correctly when I asked my server about the chef, he hails from Southern China, and it is likely somewhere around the Guangdong area (she would not confirm but did not deny that area).

The meal overall was quite pleasant and interesting.

So glad you were able to visit Tam’s and provide your great thoughts on this place (how it compares to OG HK places).

We also liked their handmade noodles as well. We found out on a follow-up visit that they don’t use the bamboo stick to make the noodles like that old-school method (darn); that would’ve been neat to see. The kitchen confirmed it was machine cut at the end.

For wonton broth, interesting! During the Grand Opening, our waitress said that the broth was chicken based, but perhaps they’ve changed it (or she didn’t know).

Oh, also, FYI, you can order their Wonton Noodle Soup version (instead of Lo Mein style) for slightly cheaper and the portion will be smaller (if you felt like trying other dishes). Thanks for the great report again!

One big problem is that if you put your nose up to the noodles to smell, even with the seasoning, there is that signature strong smell that is very Windex like (eeeek), so I would advise not to smell the noodles if you can.

It could be worse. You could a good waft of sweaty armpits.

That Windex-bleach like smell seems to permeate alot of mom-and-pop HK restaurants, from the tables themselves, to the choptsticks and utensils and to the bathrooms (thank god!)

Does make you wonder …

I had a feeling it wasn’t bamboo pole. That’s way too much for for such little gain (or appreciation).
Already quite happy with the fact they make them in house, and the texture is springy enough that it works as thin noodle lo mein.

Lo mein is the best way to taste the texture of the noodles, so if the side of broth is of any indication, in noodle soup form it’s going to be more diluted and less flavorful when noodles and wontons are put inside, that’s been the experience at other places.

Given the scope of what they are doing, being hit and miss on certain things is a given. For what it’s worth, it’s a very good effort compared to other shops. Service was very pleasant.

Even in Hong Kong (e.g. Cheung Fat in Shek Kip Mai/Sham Shui Po, a noodles dai pai dong) where they do the sweet soy sauce and lard thin noodle lo mein (no other condiments besides maybe some scallinos), the noodles also have a bit of a Windex smell to it 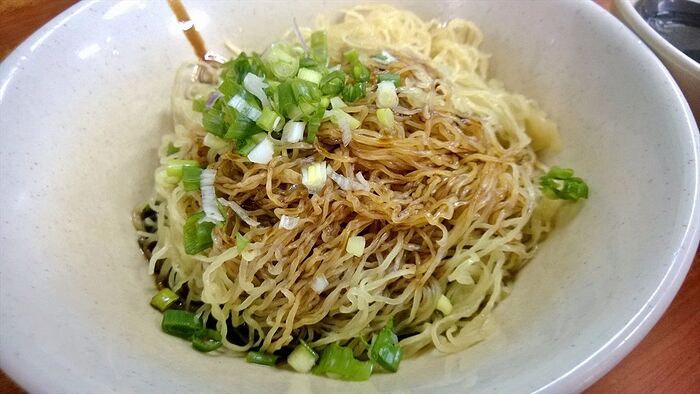 soy sauce noodles1080×608 122 KB
, but is not strong like Tam’s. It’s just too bad that the ammonia / Windex like smell is associated with fresh made Cantonese egg noodles… although they say there are techniques to remove and alleviate the smell (and some shops do it better than others, while some don’t go to that level of detail to try to remove/minimize).

It’s even more hardcore at this HK dai pai dong, roaches and rats scurry around sometimes (none during my visit), but the food is darn good and iconic by local standards.

I didn’t notice the Windex smell at Tam’s, but maybe because we had the thin fresh noodles in Wonton Noodle Soup form? (So it was in the huge bowl of broth.)

The fatter Shrimp Roe Wide Noodles Lo Mein style seemed to not suffer as much from this, or, I got lucky and didn’t try smelling the noodles as I was slurping them!

That Windex-bleach like smell seems to permeate alot of mom-and-pop HK restaurants, from the tables themselves, to the choptsticks and utensils and to the bathrooms (thank god!)

Yes! I remember smelling that everywhere at a couple of the old Sam Woo BBQ’s when we visited back in the day, and a few other places. I figured they were just heavy handed on cleaning? 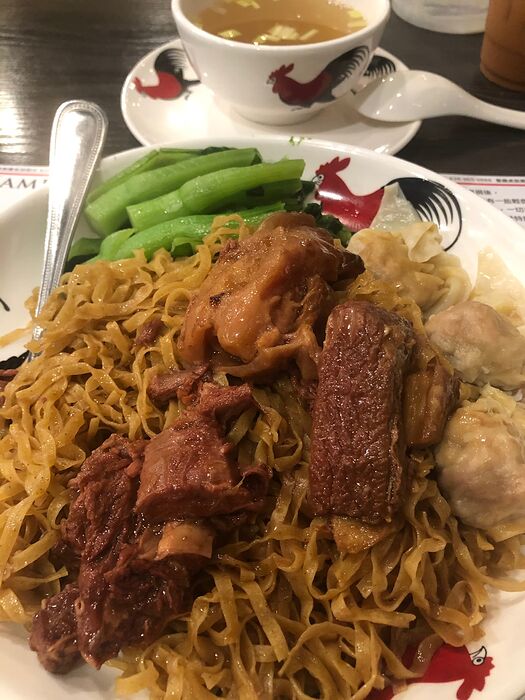 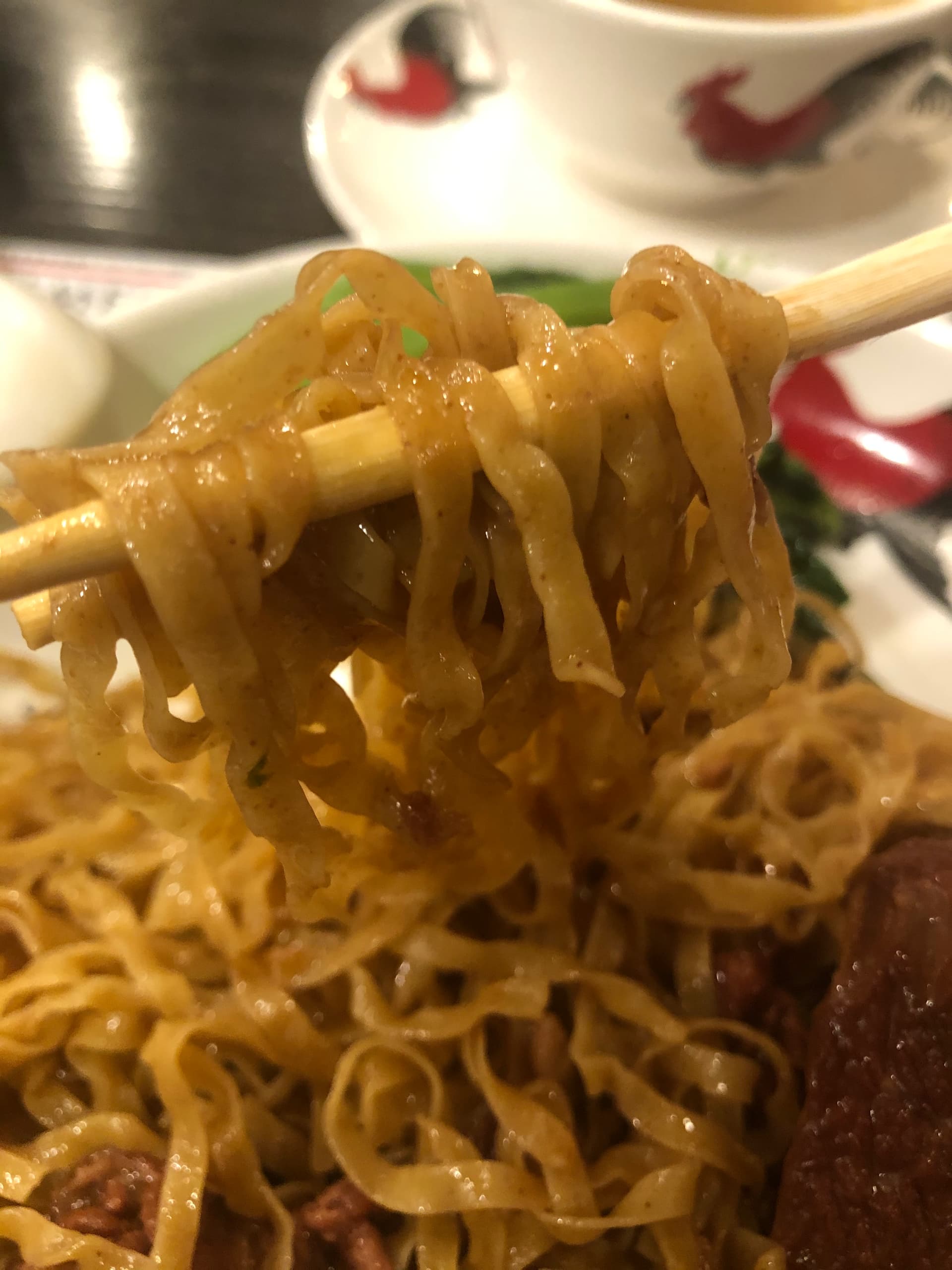 I will give this place my recommendation! I love the shrimp egg noodles. Bouncy, springy with a nice seafood/shrimp taste. Beef was nicely cooked. The wontons were nice but I give it to Noodle Boy, R.I.P. Ice HK milk tea made this a nice meal.