Take these chains from my heart and set me free

I don’t automatically diss eating in chain restaurants. Miller & Carter do decent steaks (see recent Jay Rayner review). And I’ve been going to Pizza Express since the time it only had a couple of outlets. I once had dinner with Queen’s Brian May at the Kingston on Thames branch. OK, when I say I had dinner with him, I mean we were both in the restaurant at the same time.

But, for feck’s sake, what’s the point of Wagamama?

The other night, went to the local flicks for an early showing of Knives Out (very funny, well worth seeing). Rather than cooking or getting a Deliveroo afterwards, we’d decided on dinner at one of the three chain restaurants on the cinema site. We picked Wagamama, as we’d never been before (and didn’t fancy Bella Italia or Frankie & Benny’s).

What am utterly dismal meal. Herself had the veggie katsu curry which she rated as nowhere near as nice as the one you get in Sainsbury’s café. I ordered the chicken donburi which was one of the most tasteless things I’ve put in my mouth for donkeys ages. Claggy rice, grated carrot, pea shoots, and a few shreds of chicken, allegedly dressed with teriyaki sauce.

Loch Fyne is a chain you have, that I wish we had.
My only Carluccio’s lunch, near a train station (forgetting which one) was better than the Cdn Italian chains.
Gail’s is also better than what we have.

I try to avoid eating at chains in the UK, because I usually only am there 10 days or so, so I’m trying to fit in a much special stuff as possible, but in places like Cambridge, sometimes a chain is the way to go.

I haven’t been to Wagamama yet. It sounds like the Canadian chain called Milestones. Dismal curries and Thai dishes. Some of our chain pubs do a pretty good chicken curry in Toronto, but many kitchen staff in Toronto (not the case outside the greater TO area) are Sri Lankan now, so that certainly helps.

Like a number of chains, Loch Fyne has scaled back in recent years. There isnt a branch anywhere close to me these days.

And, speaking of Canadian chains, the other day I walked past a Tim Horton’s in a suburb nearish to me. Apparently there’s a dozen or so in the UK.

Tim’s has gone downhill in Canada unfortunately. And unfortunately they are everywhere. Even at hospitals and university campuses, taking over what used to be non-chain restaurants.
The donuts are made from mixes, and they try to compete with other coffee shops with reheated breakfast sandwiches . I don’t eat there unless there is nothing else available, and then would stick with a toasted bagel or donut. There was Tim Hortons coffee at the Spar convenience stores in Ireland when I visited 6 years ago. There are a lot of Tims in NY State, Pennsylvania, Florida. Sort of Dunkin Donuts level, with more savoury food options offered now.

I’d steer clear of this place then John. 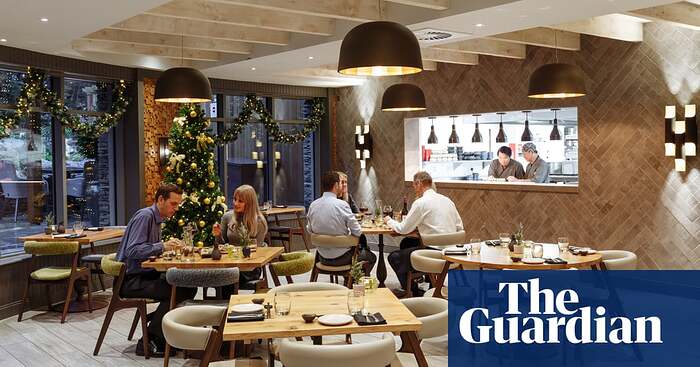 Mizu, Keswick, Cumbria: 'Like Wagamama without the service’ – restaurant...

Drinks are forgotten, tables go unwiped and no one seems to know very much about the menu

Wagamama’s not great but if you order very carefully you can have an ok meal. We had our office Christmas meal at one this year ( that’s the kind of result you get when you put things to the popular vote). Their beef brisket ramen is the only thing I’ll have . Passable and certainly better than your meal sounds.

I remember the MIzu review. She usually writes kindly about Cumbrian gaffs.

Here in the US too. Someones ridden that pony into the ground.

Someone once told me: There’s no such thing as a “grass roots” problem. The problem always begins at the top.

Timmy’s is the poster child for that sentiment

I love the title of this thread!

There are some high end chains that turn out good food. Capital grill etc. But the basic chain is easy non offensive food, well at least to the majority in the US, that usually packs way more calories into a meal than is common for that dish.

I would always rather eat at home

The Olive Garden near me always has a full parking lot. There are at least 4 independent Italian restaurants nearby. No accounting for taste.

One of our channels is currently showing Ken Burns “Country Music” series, so it was Hank in my mind when I wrote it.

That “Country Music” series was one of the best things I’ve ever seen!

That “Country Music” series was one of the best things I’ve ever seen!

I’ve got the last two episodes to watch from last night. Big fan of Burns ever since his Civil War series in the early 1990s - I already had something of an interest in theh conflict but it proved to be the catalyst for my wider military history interest. Civils wars are so fascinating!

A few positive words about a chain which I rate - the Lounges group.

My local one is the Brezo Lounge in Cheadle. There’s a goodly number now across the country - all called Lounge, with a the first name sounding vaguely Mediteranean and always ending in an “O”.

We were doing a bit of shopping and popped in for a late second breakfast. It’s open all day, so you could go for lunch, dinner, or just coffee and cake. I’ve only been for breakfasts and it’s decent quality and certainly better than the greasy spoon in the village.

The brekkie menu, which is available all day, has a good range from the “Full English” or a sausage butty, through to my partners choice this morning of American pancakes, streaky bacon and syrup. I went with their take on an American diner breakfast - thick pancakes, bacon, hash browns, baked beans and two free range fried eggs.

Lunch/dinner main courses are the likes of burgers and other American - or Americanesque - food like macaroni cheese, fried chicken or beef chilli.

It’s one of those places where you find a table, order at the bar and they bring your stuff to you. Quick, smiley service and reasonable prices. More expensive than your local greasy spoon but probably better value.

This thread is moved to culture board as it generates international interest. (Was originally posted in uk board)

One of our channels is currently showing Ken Burns “Country Music” series, so it was Hank in my mind when I wrote it.

And now the song is stuck in my head, but at least it replaced Spanish Eyes from The Irishman, so thanks for that.

Don’t lose sight of emotional attachment. I’ll stop in a (US) Olive Garden from time to time because of the salad. I haven’t figured out why but I get cravings. Many places with salad bars get my attention.

When I’m traveling by myself sometimes something dependable is better for me than taking a risk on an unknown.

That said, the chains of my childhood that survive get my custom only every few years and usually disappoint.

Wagamama was a bit of a lifesaver for me years ago in the times when I was in London by myself, not really knowing the local areas, and needed a cheap, fast meal that wasn’t fish and chips. It wasn’t too bad then. Nando’s fit that bill the last couple of times in London, plus last year when I was in DC for a conference. I’ve had Nando’s in South Africa (its home turf) and wish there were more outlets in the USA than just in the Baltimore/DC area.