The BF and I went to Taishoken recently, in the old Mau space - a new ramen and tsukemen restaurant, first established in Tokyo, circa 1955. The Mission restaurant is their second outpost in the U.S. (San Mateo has the first). They’re known for their tsukemen (“dipping noodles”) – a Taishoken invention: cold noodles that are dipped into a hot broth - sort of a deconstructed ramen. The story goes that customers saw the staff eating it on lunch breaks and asked for it. It has since become very popular in Japan, so I was game to try.

We started out with an order of gyoza which weren’t the best we’ve had - the pork filling was a bit bland and mushy, and the skins weren’t crispy enough. 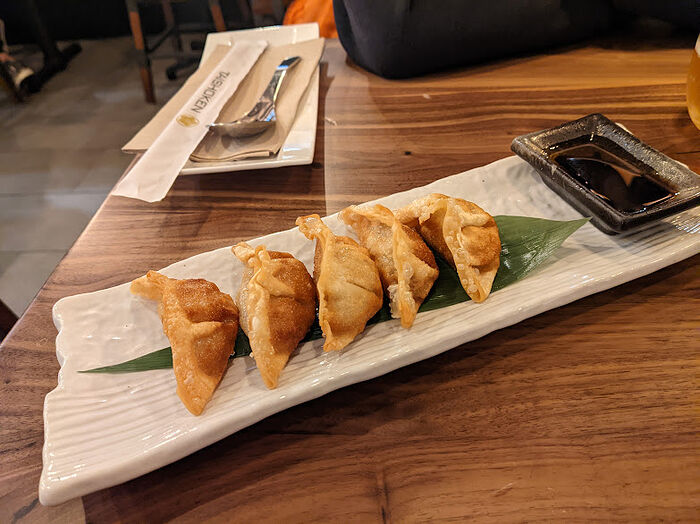 The karaage, however was great. Craggy and crunchy, light and airy, made with super juicy and flavorful dark meat, and served with mayo and what I believe was togarashi. Some of the best karaage I’ve had. 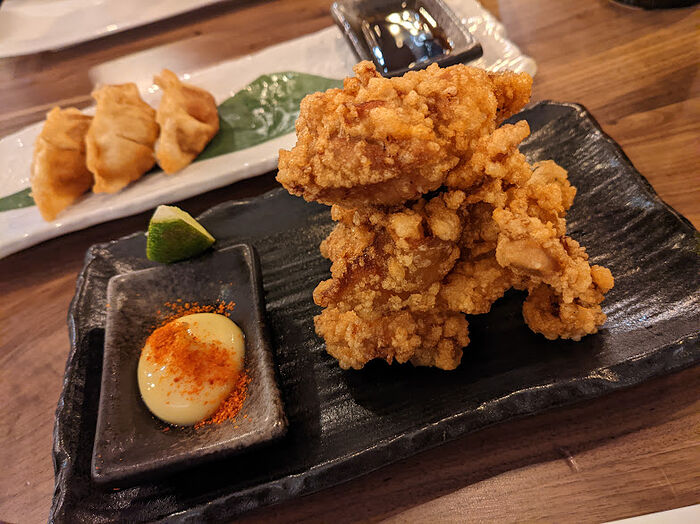 For the tsukemen, you’re instructed to pick up the noodles with your chopsticks, dip them into the broth and then into your mouth. You’re warned not to simply pour the soup over the noodles. The noodles came with fat slices of rare, sous-vide Berkshire pork chasu, which practically melted in the broth, and ajitama - Jidori soft-boiled egg. The noodles in this version were buckwheat, with a homey, chewy texture. The rich, thick broth itself was a bit tangy, made with pork and chicken like that of the ramen, but also with anchovy and bonito, menma (fermented bamboo shoot condiment), and seaweed. My only problem with the dish was that I was a terrible at picking the thick noodles up with chopsticks; they’re very slippery and I could only get a couple of strands in at a time. So we ended up taking most of mine home. For those who are more adept at this and end up with leftover soup, there is the option of ordering dashi broth (“Soup Wari”) to mix into it, which is poured table-side from a metal pitcher. 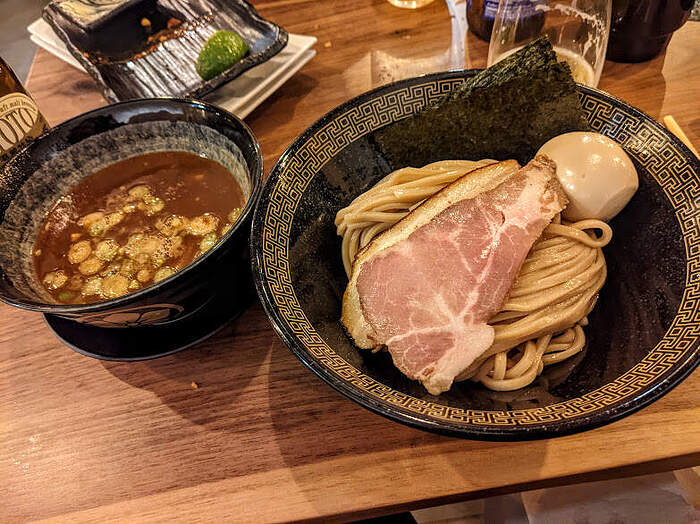 The BF got the spicy ramen. The texture of his wheat noodles were top notch, with a good chew, and I love this broth more than mine– again, pork/chicken, but without the tang… I also had no problem with the chopsticks for these noodles. The broth was, again, rich and almost creamy in texture, with a lump of spicy pork miso, chili oil, kikurage mushrooms, the same fatty chasu, scallions, and seaweed. His came with only one slice of chasu, however, but you can always order more. No egg either. 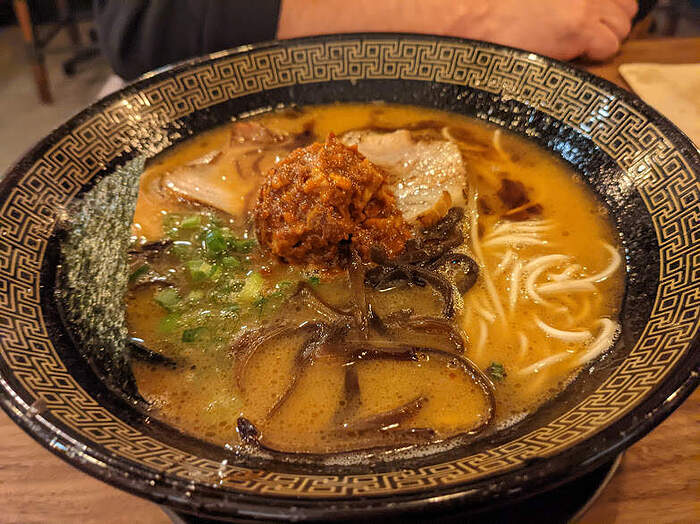 They offer several Japanese beers, sake, plum wines, and soft drinks. I had a Tokyo Yakusho with citrusy yuzu, and also a faintly sweet Okunomatsu ginjo sake, and the BF had a Ruri “German-style” pilsner.

There are different variations of ramen to choose from – including a lobster ramen that they make limited amounts of each night – as well as dry noodles with no broth that totally piqued my interest, and chasu don – roast pork over rice. I’d also love to try their potato salad, and tuna tartare with sea urchin. There are vegetarian options, and two simple desserts: vanilla ice cream and lychee sorbet.

I don’t know if I’d call it a destination spot, but I did enjoy it.

Thanks for the report and pics! That karaage looks very appetizing. I didn’t realize that tsukemen was actually invented by the founder of Taishoken in Japan.

I went here on the weekend for a late lunch and had the tsukemen ($20), which I thought was really good. I got there around when they opened at 4pm, and they were already kind of busy. They do take reservations. I believe they make their own noodles in-house - there is a noodle machine displayed prominently behind the counter, along with several different noodle cutter devices and sacks of flour.

Speaking of the noodles, for the tsukemen the noodles were medium thick and have some buckwheat in them, giving them kind of a soba like texture. They were very good. I find an easy way to eat them is to grab a small bundle and place in the dipping sauce, and then eat them out of the dipping sauce bowl using chopsticks and spoon.

The tsukemen comes by default with a marinated soft boiled egg / ajitama with a very runny yolk, a single piece of nori, a thin slice of what looked like roast beef but was apparently a sous-vide pork chashu, and a nice thick fatty piece of roast pork chashu. Maybe not super heavy on the toppings, if you are hungry and looking for more you may want to add on some extra. You can also get extra noodles (“kaedama”) but I thought that the amount in my bowl was more than sufficient.

The dipping sauce, which has chicken, pork, and fish, was gelatin rich, salty, and a little sweet, with lots of umami. It had menma / bamboo shoots and chopped scallions in it as @mariacarmen mentioned. I did get the dashi added after finishing my noodles, which was poured out of what looked like a coffee carafe and resulted in a nice soup to finish my meal.

This was probably the best bowl of tsukemen I’ve had in SF though I am a tsukemen newbie, having only tried the bowls from Iza in the Lower Haight and from Yamadaya in Japantown. 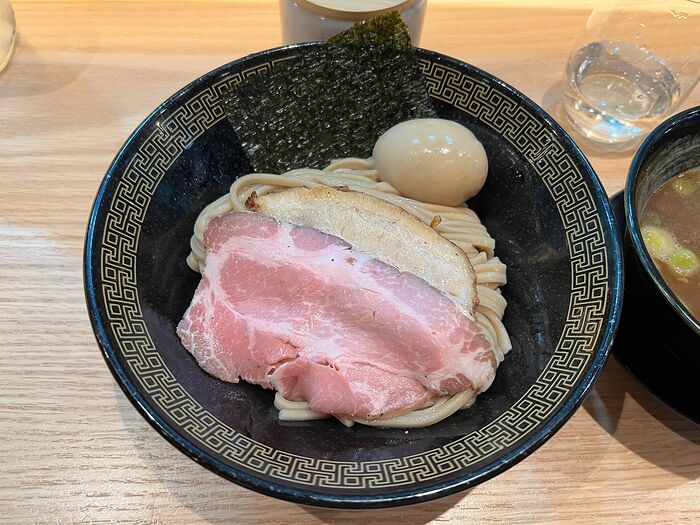 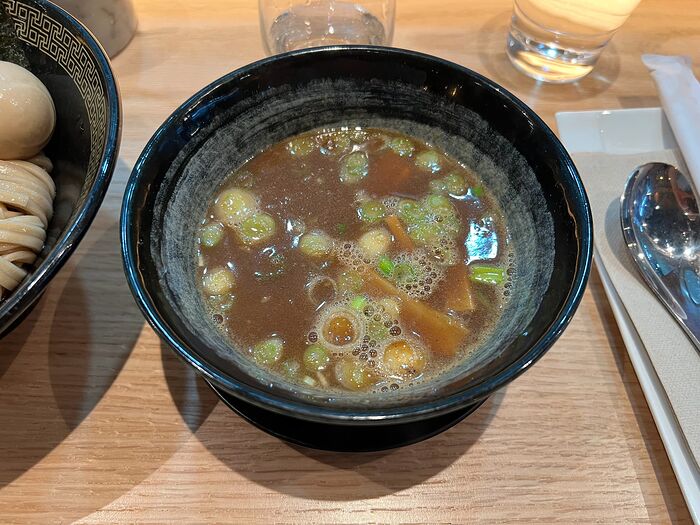 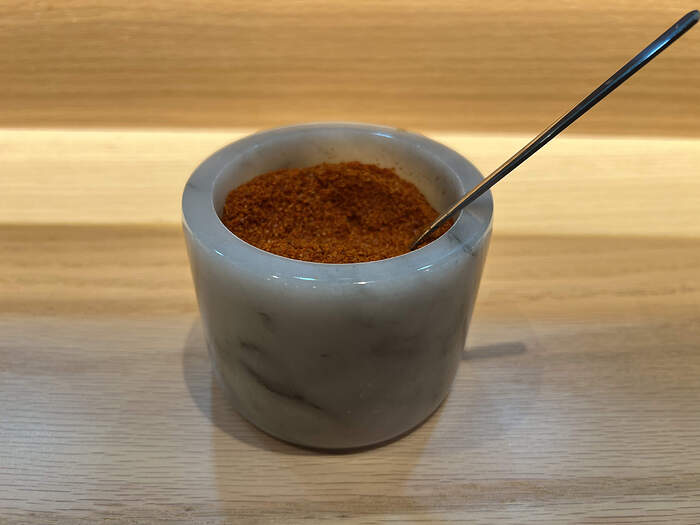 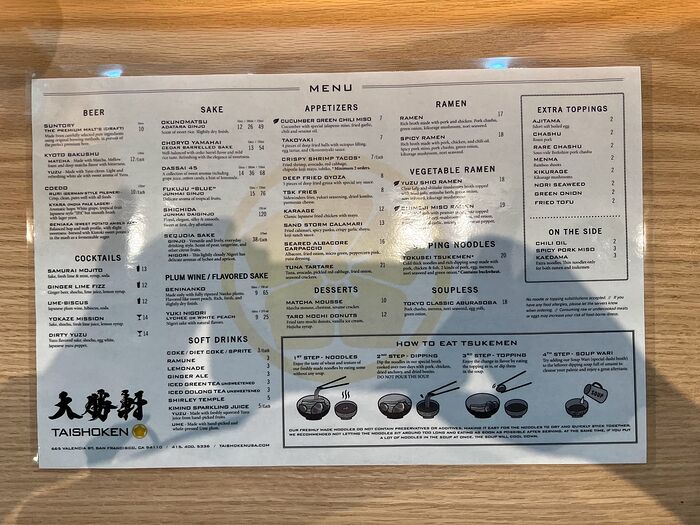 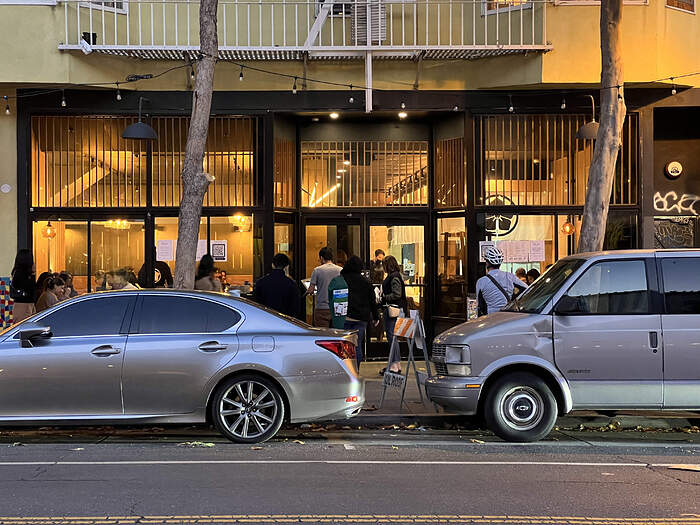 thanks! nice report yourself!

you hit a lot of the points i wrote in my original review for Mission Local (which i edited for posting here). but your pics are better!

Taishoken: New ramen and more in the Mission

All the noodles are made in-house at Taishoken in a process that gives them their irresistible texture.