Thanks again to those who helped with recommendations on this thread. We got into TPE early on a Thursday morning and had a flight to HK on Sunday afternoon. We had six hours to kill before our hotel room was ready, so took a meandering walk through Da’an district. It was too early for much in the way of food, but we did pass the original Din Tai Fung an hour before opening, with three people already in line. Our goal, though, was the one in the basement of the Fuxing SOGO building. We got there a little after the 10am opening and there were already more than twenty people seated.

The house salad (seaweed, tofu strips, bean sprouts, and glass noodles) was quite artistically balanced, and also balanced in taste. Then came the famous XLB, which lived up to the hype. Thin skins that didn’t tear, tasty soup, great filling. Steamed shrimp and pork dumplings were also nearly perfect. The steamed pork buns were merely good compared to the other three dishes. Gracious and attentive service, and a modest bill. When we left, the restaurant was almost full, and we blundered through the opening ritual of the SOGO store where the employees all stand at attention until the music finishes playing. (I had occasion to visit a Seattle location of DTF a couple of weeks later, and while good, there was no comparison.) 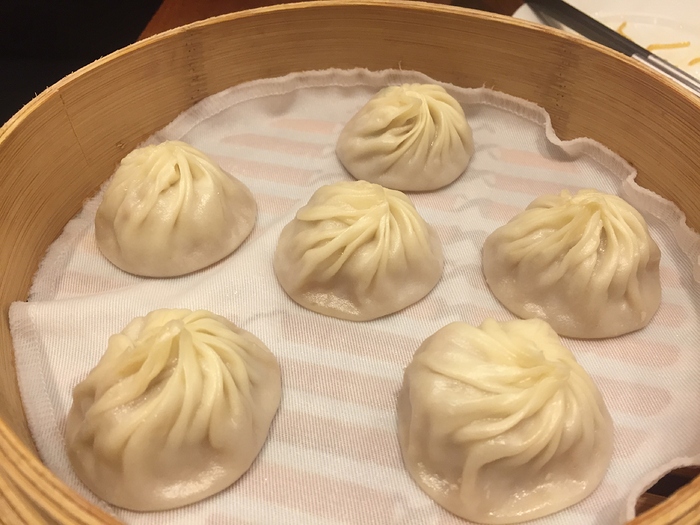 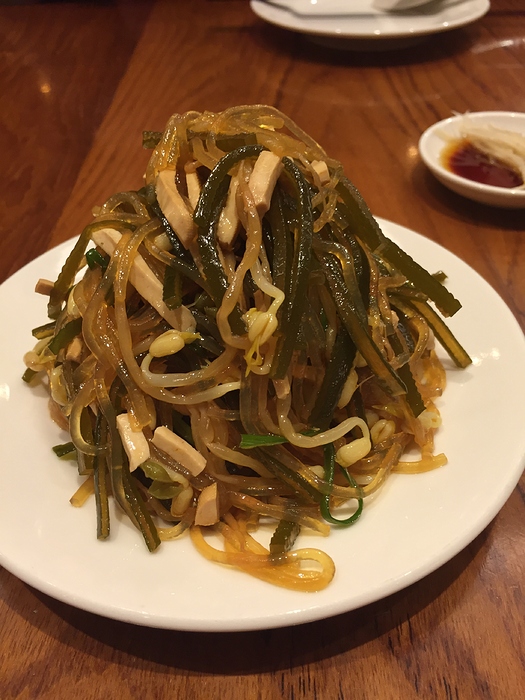 Late and small snack at Lan Jia Traditional Taiwan Snack: a gua bao consisting of stewed pork (half fatty and half lean), pickled mustard greens, chopped coriander, and peanut powder, spooned into a large soft steamed bread. This was enough for two, and terrific. Were it not for the heat and humidity, I would have thought myself in paradise. 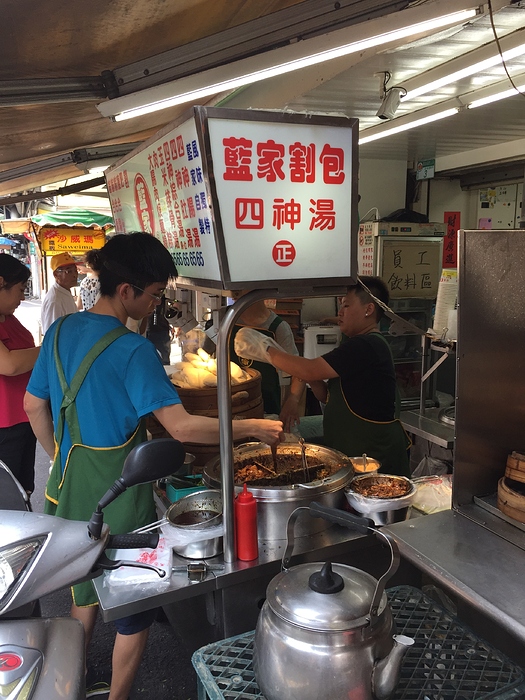 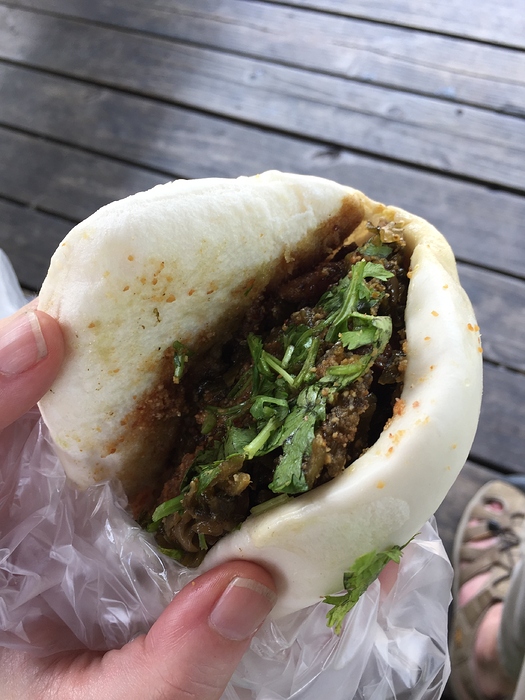 Dinner at the Raohe Night Market, where the star was right at the entrance, the stall making hujiao bing (baked black pepper pork buns). We had to carry it through the entire market to let it cool down enough, and it rewarded the wait. There was plenty else that looked tempting, but we were still recovering from the 14-hour flight, so settled for some pastries from a small table. 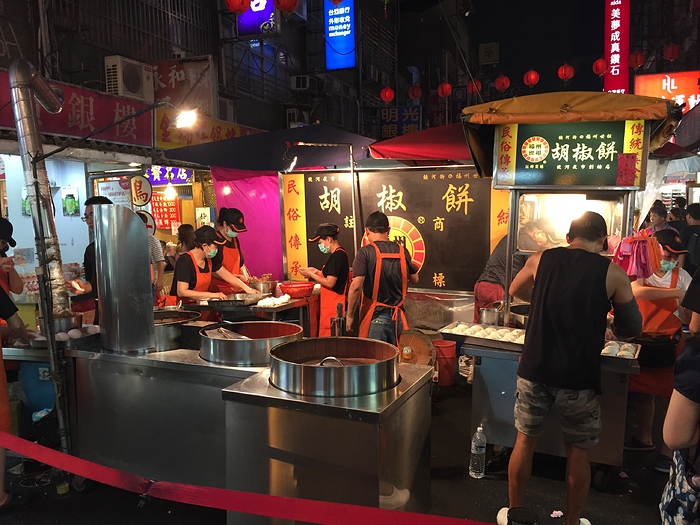 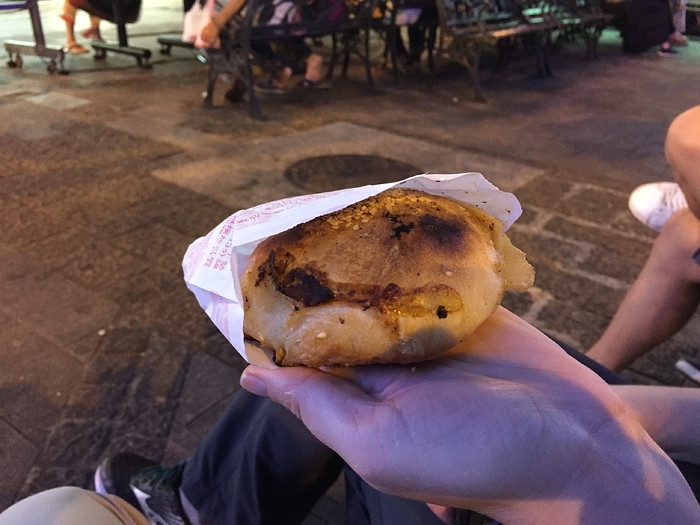 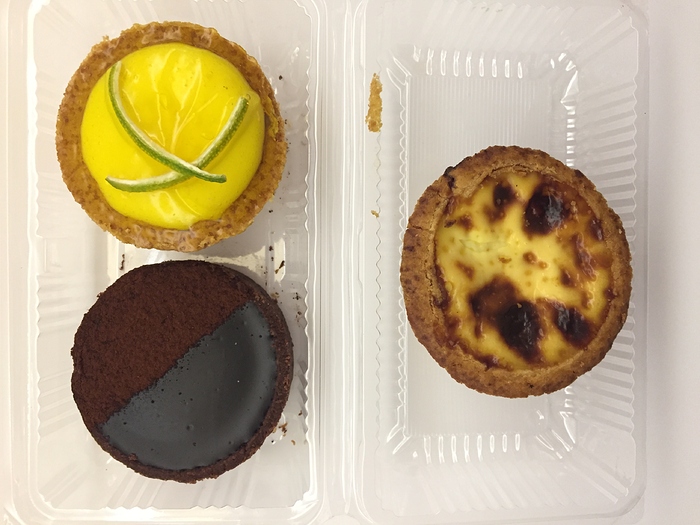 Lunch the next day at Tu Hsiao Yueh (Slack Season Noodles), Zhongxiao Dunhua location. Tainanese favourites in a pleasant setting. We had the noodles dry rather than in soup; the seasonal vegetable was bitter gourd with pineapple, and these dishes were excellent. The pork over rice was good, but pretty much the same topping as the noodles, and the fried oysters with pepper-salt dip were also good, though perhaps a bit mushy. 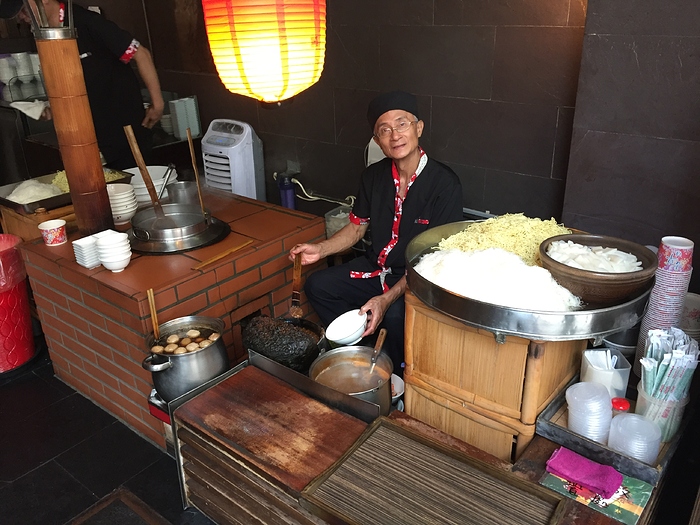 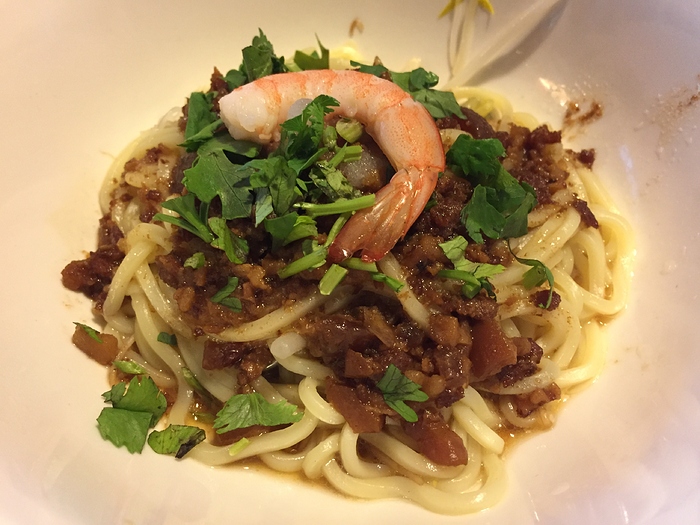 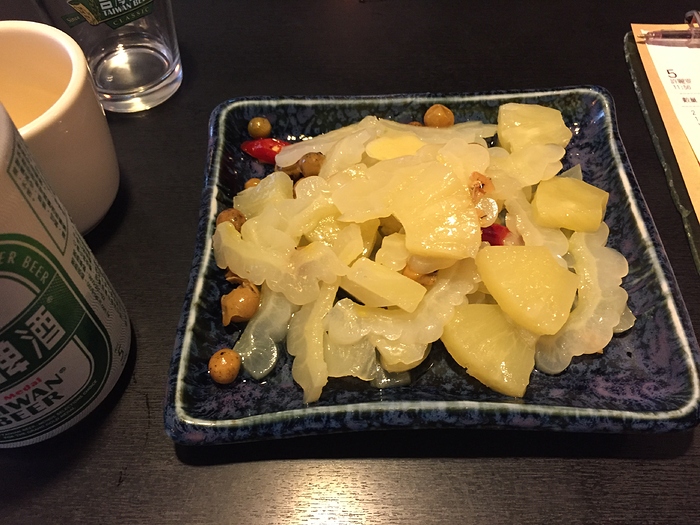 Early dinner at Addiction Aquatic Development near Songshan, in an old fish market turned into a Japanese-themed Eataly by a major local restaurant group. We went for the standup sushi bar, where the deluxe nigiri combo (NT$600, or about $20 US) was billed as ten pieces, but wasn’t. 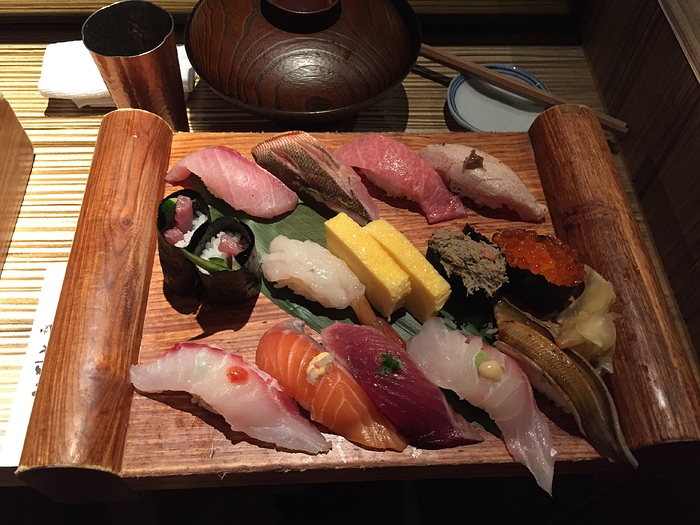 Unfortunately, this looked better than it tasted. It wasn’t bad, but it didn’t sparkle. The fish seemed to have been precut (there was plenty of it packaged for sale on the other side of the counter where we ate). At 4pm, the place was full of people, many (I suspect) tourists (I can sometimes identify mainlanders, but not reliably). We went on to evening hours at the National Palace Museum, which left us with no energy to visit the Shilin Night Market, even though we were steps from it when changing from bus to train.

On the morning of our last full day, we went easy on the hotel breakfast, and then walked down to Yong He Soy Milk King, south of Da’an station, reportedly the original and much-imitated. We shared a modest selection: cold soy milk, you tiao, shao bing. All of these were great, and the atmosphere at the open-air corner stall was upbeat. Everyone was friendly (this was pretty much a constant throughout) and I really enjoyed watching them work. 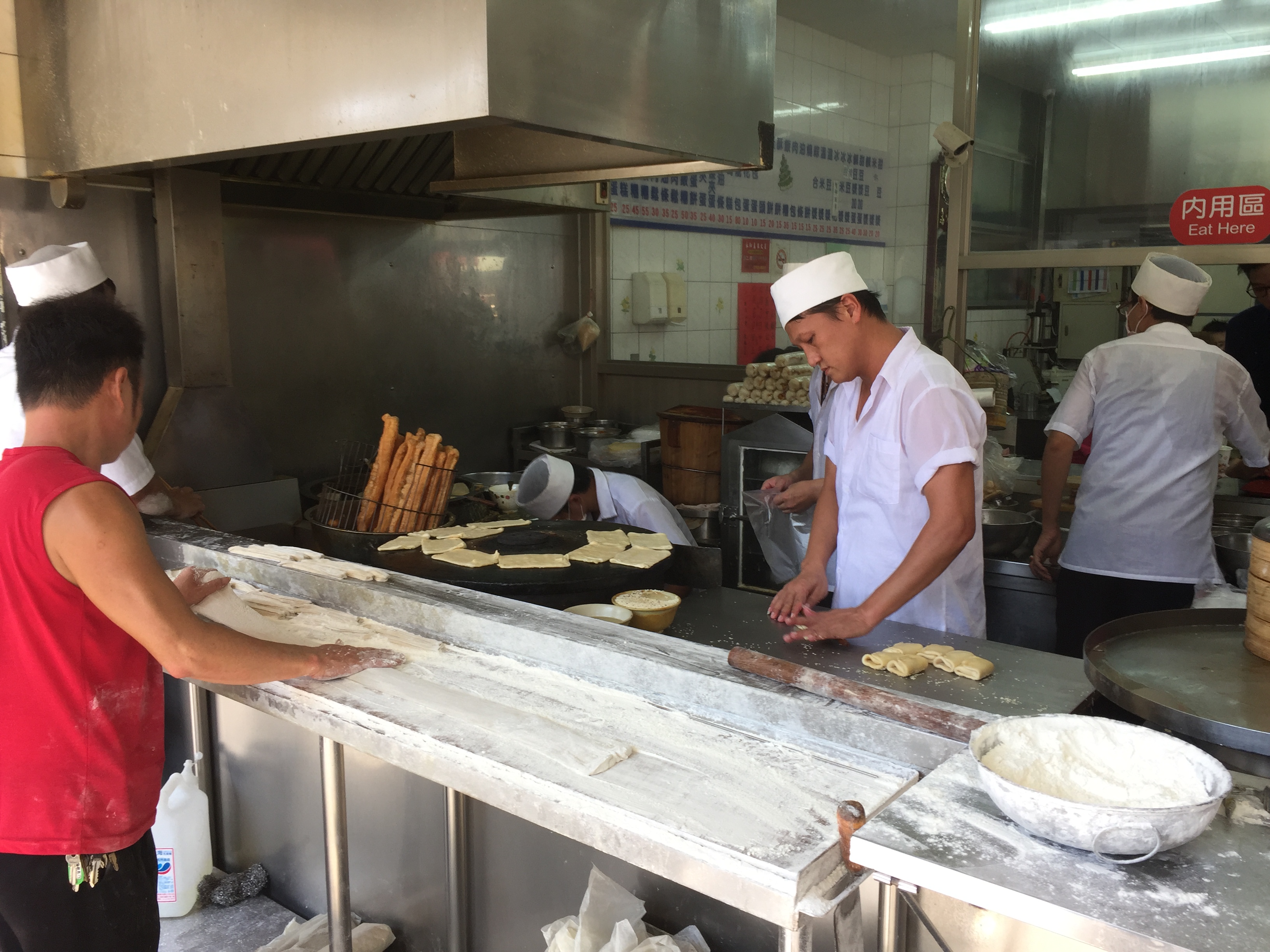 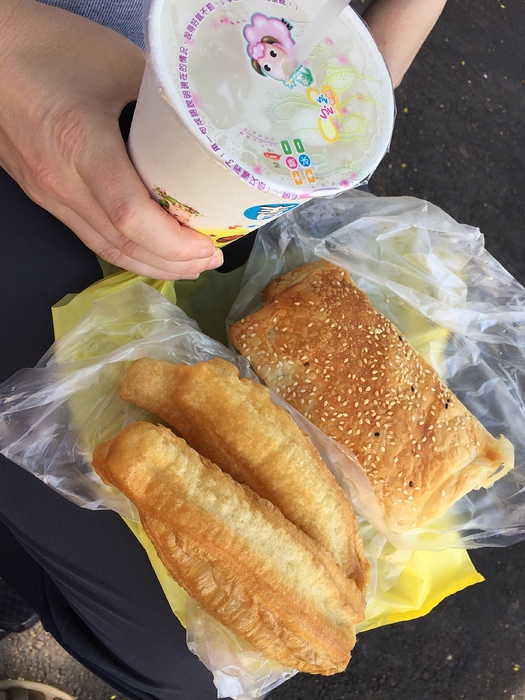 Lunch was at Shin Yeh, the Zhongshao Fuxing location rather than Taipei 101. We didn’t have a reservation, and were ushered into a private room where we shared a large round table with two other parties. The servers didn’t really speak English, but there were English translations on the menu and their specialties were helpfully indicated. Stewed pork belly with tofu; stir-fried scallops; fresh shiitake mushrooms and stir-fried oysters (menu said “omelet” but there was no egg; oysters were firm and plump); fried rice with shrimps (server handed me the menu and pointed to this category; I was too flustered to remember how to order plain white rice); complimentary peanut mochi. Fancier setting (and higher prices) but we were away from the bustle yet got to discreetly observe (as at Tu Hsiao Yueh) families having a nice meal. The food was quite nice. 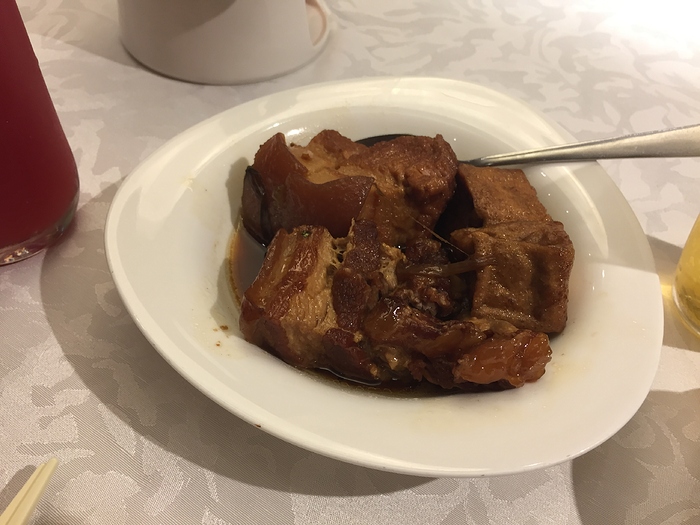 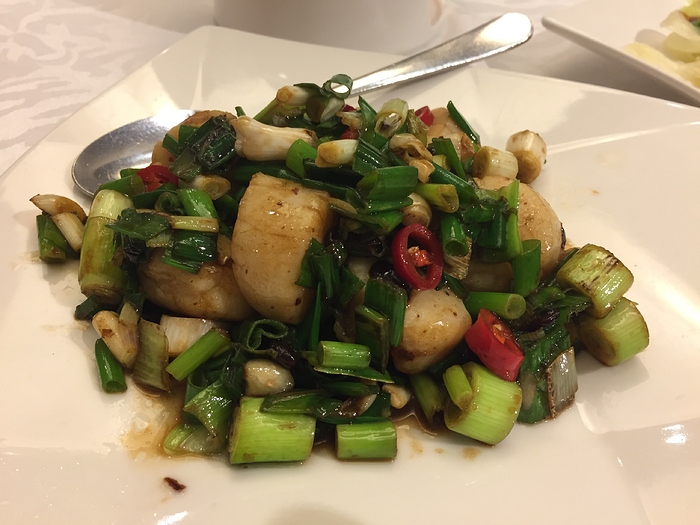 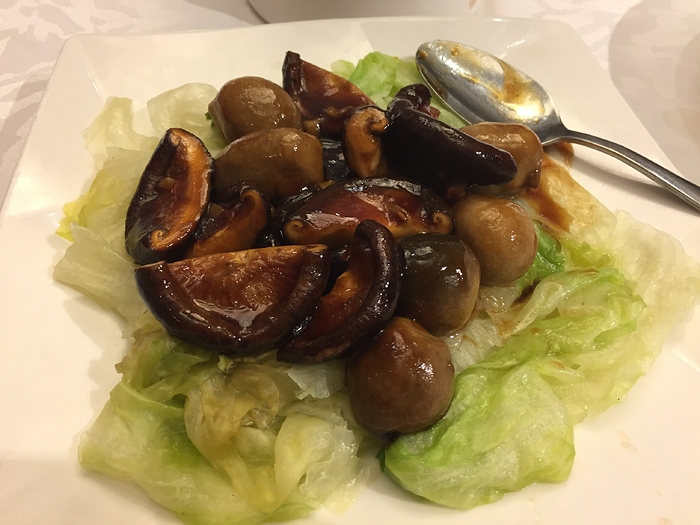 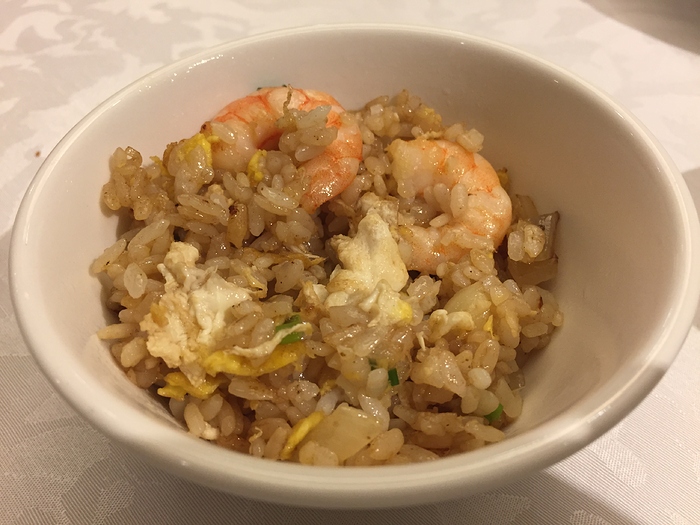 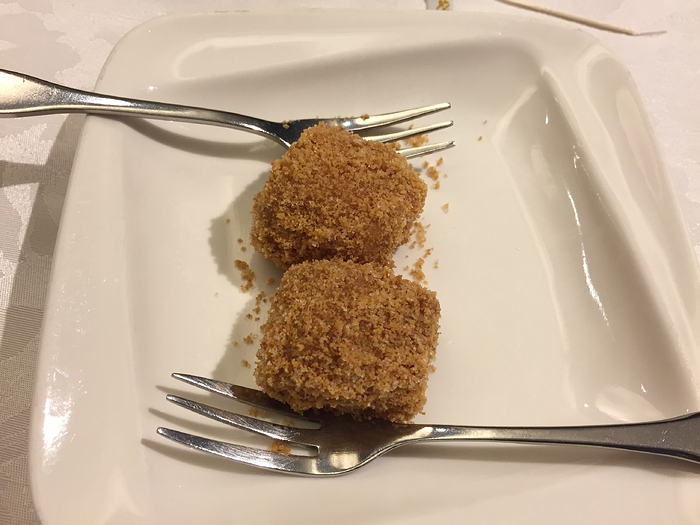 Final dinner of the trip, at Ban Mu Gardens in Da’an, kitty-corner from our hotel. This is a chain with locations in Arcadia and Annandale, but this is apparently their original location. Modest and bustling. We were handed a check-off menu with English on it. While we were puzzling it out, one of the other patrons who spoke English came over to make sure we understood and checked over our order. Cold dishes were self-serve in a fridge; we selected marinated eggplant. We each had a bowl of beef soup with knife-cut noodles, and also ordered beef pancake roll and a pork bun. 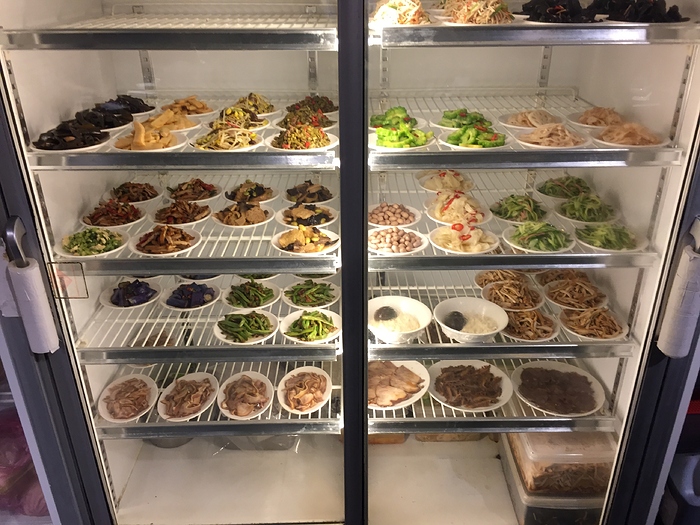 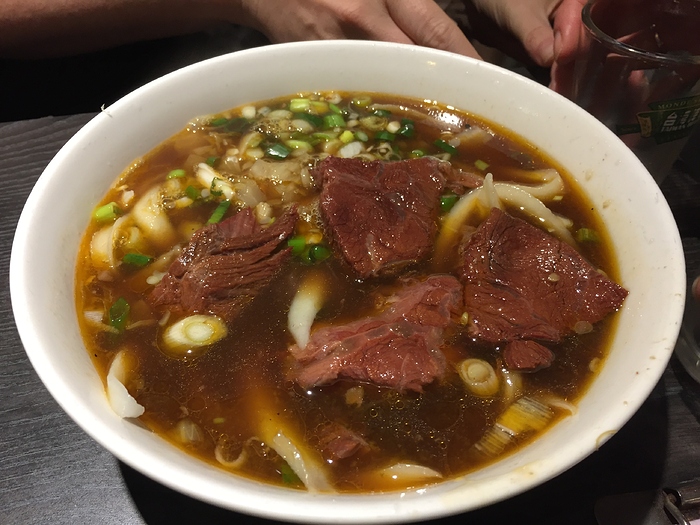 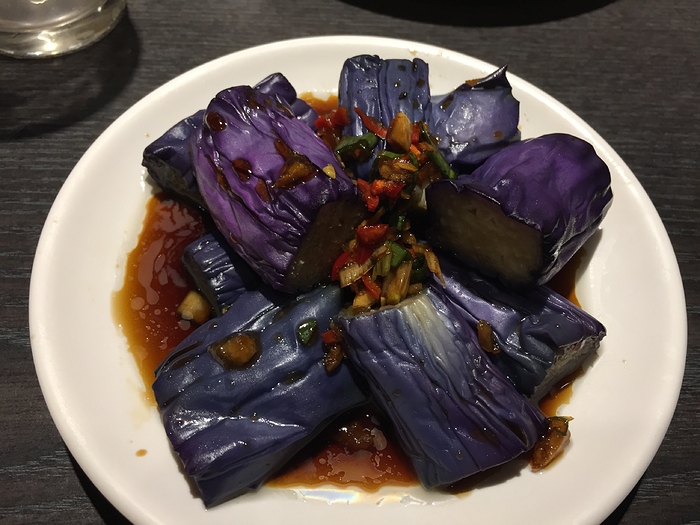 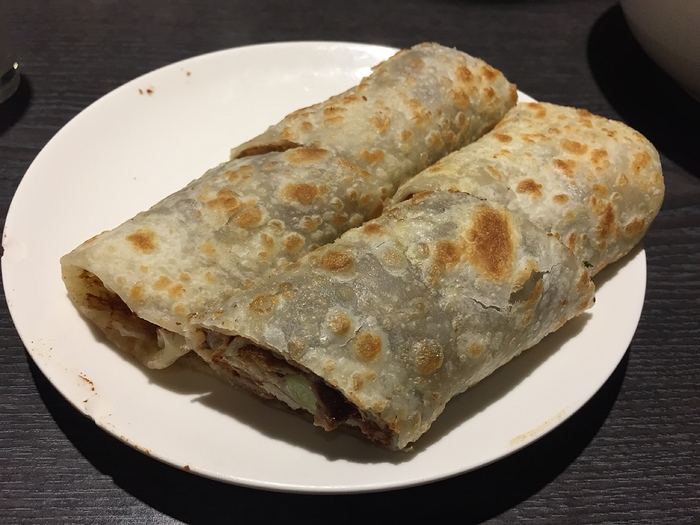 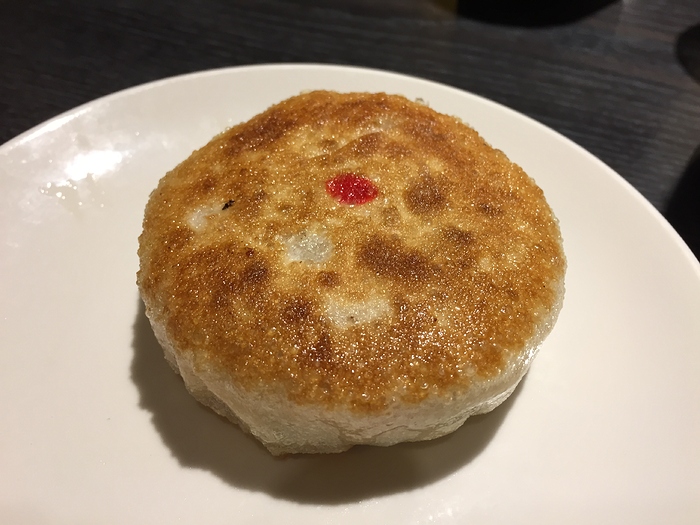 Oh, this soup. This is the broth I want every time I have pho and never get: deeply-flavoured, redolent, rich, complex. Beef was melting, noodles were perfect. In fact, the whole experience was perfect. Some patrons got up and moved to other tables to chat with friends; others came in pairs, sat quietly chatting to each other, finished up and left. It was clearly a neighbourhood favourite, and I would eat here every week if an ocean didn’t separate me from it.

Overall impression: we must go back, not only to stuff our faces again but to see the rest of the island. Maybe in winter, though.