Super happy about these two additions by Ford Fry. Superica is old school Tex-Mex and La Lucha is “Gulf Gems and Chicken Dinners” inspired by the venerable Monument Inn. I’ll give it about a month before I go if I can wait that long. 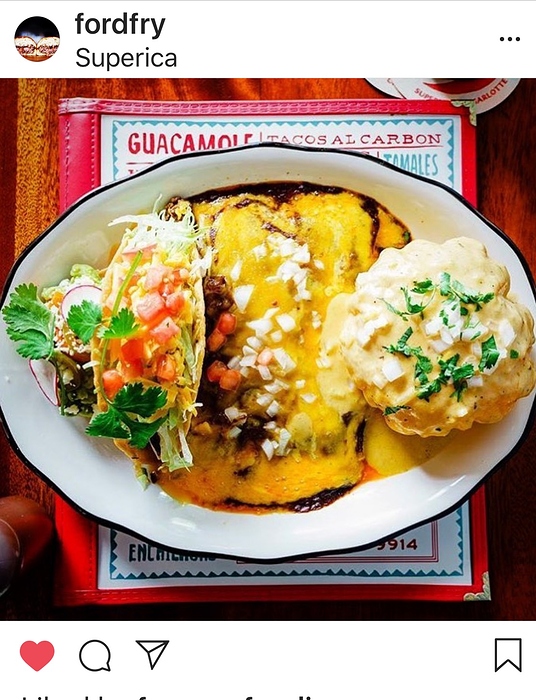 inspired by the venerable Monument Inn

Splitting hairs but it was San Jacinto Inn which was just across Battleground Road from Monument Inn which now occupies the erstwhile Lynchburg Crossing on the Ship Channel.

The crabs and fried chicken at La Lucha is an homage to the menu at San Jacinto Inn which featured all you could eat peeled boiled shrimp, fried chicken, biscuits, and boiled crabs in the summer and raw oysters in the winter.

It’s interesting to see crabs on a Houston menu where crawfish crazed customers consider them to be too much “work.” They certainly aren’t going to help turning over tables as they take a while to eat. When the Wifeacita and I order them in Galveston it takes well north of two hours to eat although she is very methodical not leaving a shred of meat. I’m not sure about the Thai butter sauce. 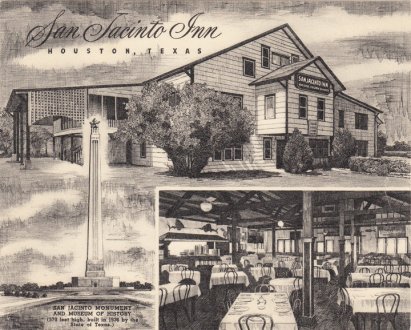 For seventy years, the San Jacinto Inn reigned as the place to eat at the battlegrounds twenty miles east of downtown Houston where Texas won (or, at least, thought it had won) its independence fro…

it was San Jacinto Inn

You are correct! I could not remember the name of the closed place, even though I was there circa 1975, so I defaulted to the current Monument Inn, even though I looked and did not detect fried chicken on the menu. Thank you for saving me from myself and this post from containing grievous errors!

I was taught to eat everything on your plate, before a second serving. I believe that was first or second grade. LOL

I was taught to eat everything on your plate, before a second serving. I believe that was first or second grade. LOL

If you try to eat everything on MY plate, we’ll have words.

I’ll eat those too. Then I will have second helping.

Not quite a month open, but I went for a late lunch to Superica. It was unfortunately a little disappointing after the anticipation, which is what usually happens, right? Anyway, it failed to steal my heart from El Tiempo and Lopez.

Two salsas arrive with pomp and lengthy explanation, one green and one red. Fairly standard except they first come in little pitchers that you yourself then pour into the standard bowls. Why?

It was accompanied by a squirt bottle of hot sauce that I tasted on a chip but otherwise ignored. It tasted like Valentina to me if you’ve had that before. 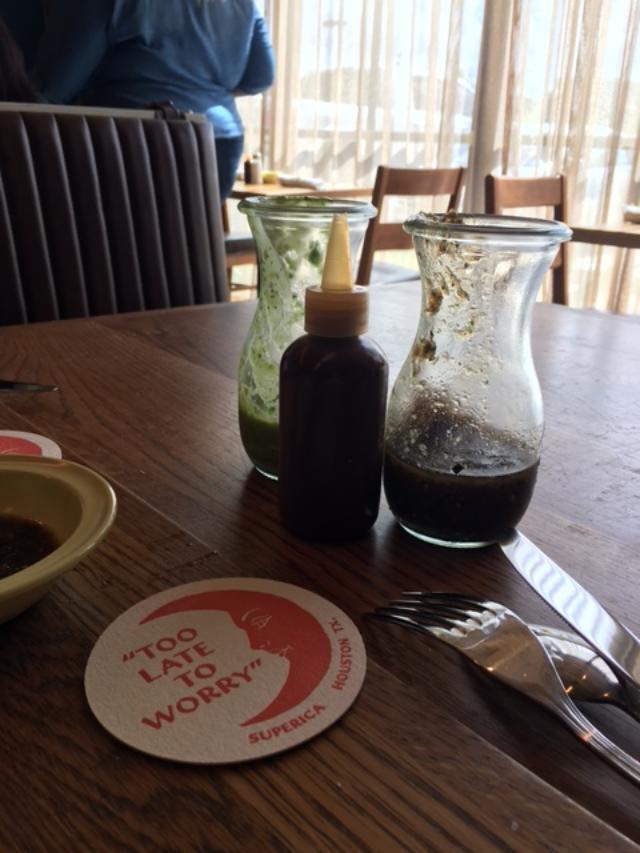 The queso gets a solid D. It’s a flour roux-based cheese soup, thin and flavorless containing little actual cheese. I mean, this is tex-mex basics, right? The floury cheese soup is the stuff of novices. 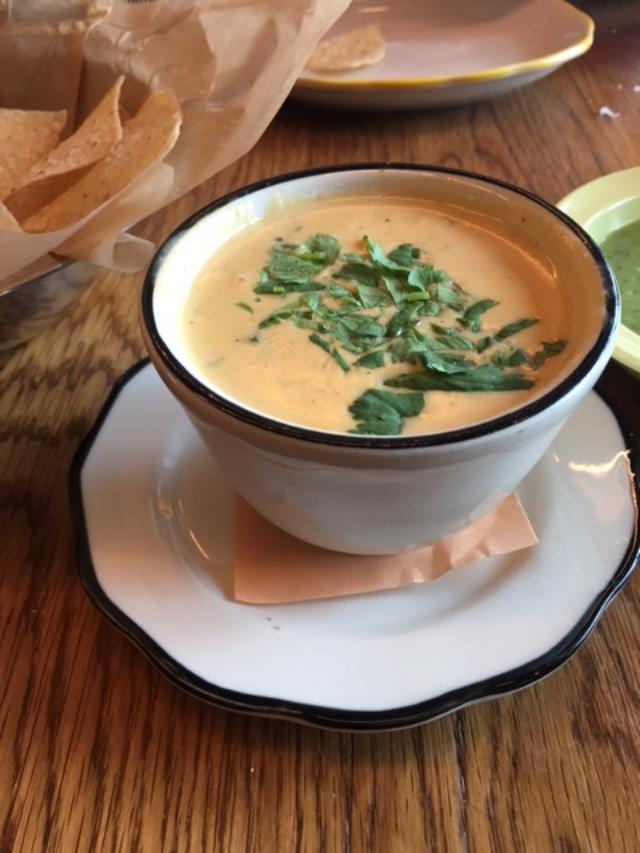 The lunch special is pick-two-comes-with-rice-and-beans. I picked the beef taco and cheese enchilada for $11.99. I liked it, but couldn’t help comparing it to the numero dos at El Tiempo that also adds avocado for $10.59. Also the enchilada and taco at El Tiempo are super-sized, these are standard household size. 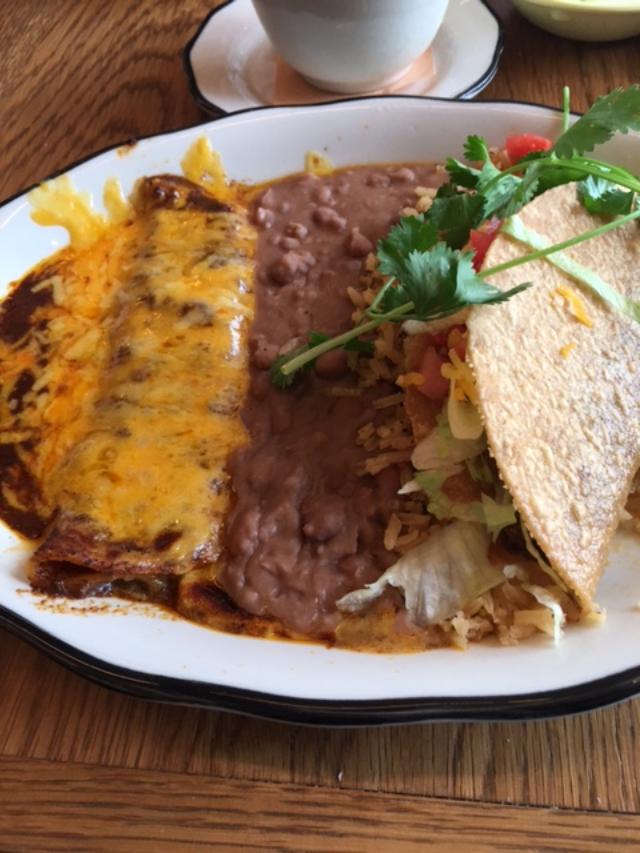 The prices are high as you might expect ($26 for the tampiquena), but the lunch prices were okay. Frozen margarita was very good at $9. The only combo I saw outside of the lunch menu is the El Lopez, which is same as the “Lopez combo” at the actual Lopez, except it is missing the relleno. The Lopez at Lopez (con relleno) is $12.50, the Lopez at Superica (sin relleno) is $18. But then again, maybe it’s not even named after Lopez on Wilcrest. A Felix sign is affixed behind the bar, however and I’m sure the cheese enchilada is the same Felix version that is served at sister restaurant State of Grace.

My friend got the shrimp tacos and was pretty annoyed to find that the crispy shrimp tacos were heaped with chunky salsa and avocodos on top. Had to be eaten with fork and knife and as she said, “this is not really a taco at all.” 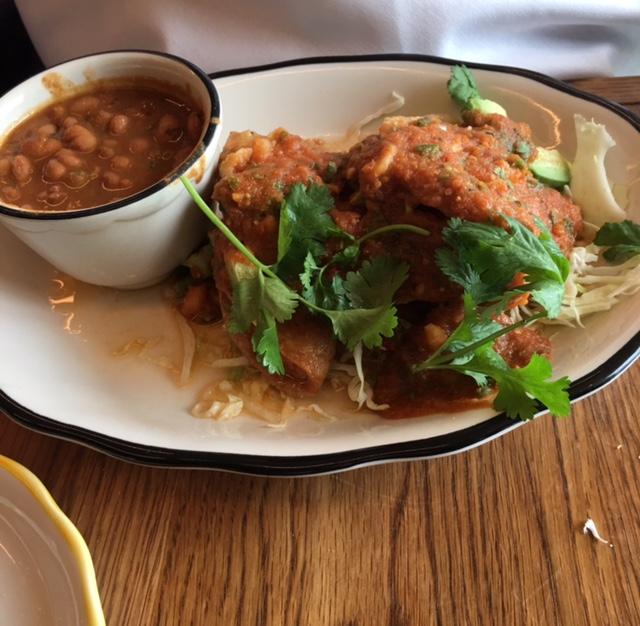 We would be asked if we wanted more tea, and the glass would be taken out of the room never to return or to return much later or after asking again. Same with the chips when they ran out. This method of refilling teas in Texas will never work. Ford Fry, invest in some pitchers. It was very loud and when we first arrived and the server was giving his lengthy spiel about the salsas and his favorite things on the menu, I heard about every other word.

Anyway, I give it an overall C+. I may be way off here, someone else go try it out.

Same with the chips when they ran out.

That also is not going to fly in Texas.

Someone else try it out, not us as you’ve scared me away. We’ll stick with El Tiempo for fajitas and everything crab.

Thanks for taking one for our tiny team.