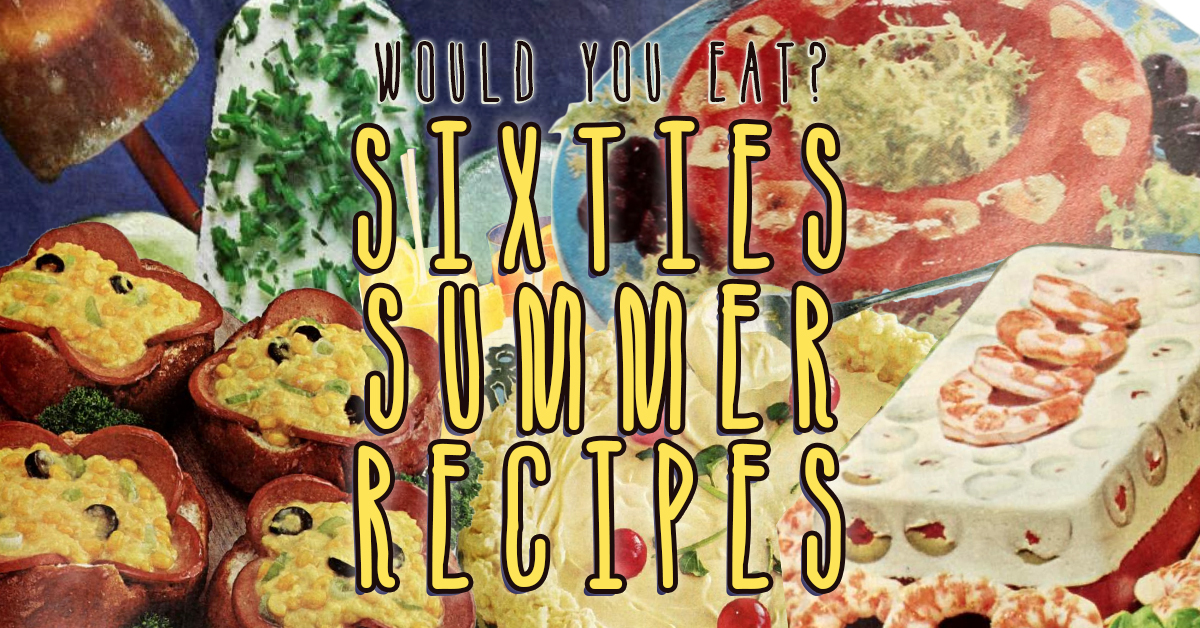 Pick: Would you eat these vintage summer recipes from the Sixties?

Nothing beat the heat like… cold tongue and frozen soup?

Many of the predictable subjects here (jello salads with pimento olives, mayo, and meat, etc.). But it also contains TWO questions about buttermilk, i.e., would you drink buttermilk or is it nasty?
Surprising the number of people who don’t like/never had buttermilk.

I kind of liked the zen vegetable garden…

Surprising the number of people who don’t like/never had buttermilk.

I wonder if buttermilk was more of a “thing” back then? My grandfather used to drink it as a treat.

We like Kate’s Buttermilk to marinate pork chops and as a component in old-timey dressing for coleslaw. Though neither my husband or me will ever pour ourselves a tall, cold glass of buttermilk!

My mom had an aunt who used to drink it too. It kind of tastes like this middle eastern drink that I have had, which I found quite refreshing but a slightly different consistency than buttermilk.

It’s never occurred to me to drink a glass of buttermilk, but I do enjoy lassi sweet or salty. I think a lot of people also hate yogurt, but if you think of buttermilk as yogurt’s runnier cousin, maybe it makes more sense as a beverage. The “hoola coola” with buttermilk and fruity sherbet sounds delightful.

We grew up drinking buttermilk with soda water. It’s similar to salt lassi. Sometimes we would get a small glass of plain buttermilk with a spoonful or two of jam mixed in. If you didn’t t finish it, it went in the freezer, then you would have jam-buttermilk “ice-cream”. I think I invented that part.

Surprising the number of people who don’t like/never had buttermilk.

I wonder if buttermilk was more of a “thing” back then? My grandfather used to drink it as a treat.

It definitely was more of a thing back then. My dad would drink it sometimes. It’s often hard to find in supermarkets today whereas when I was a kid (in the 60’s) it was probably at least as available as butter was - although the 60’s were also of course the golden age of margarine. I remember thinking of it being sorta of old-timey, I guess, and also kind of Southern, both of which I think are true. The people I knew who were from/had roots in the South were more likely to have it on hand.

That’s how I remember my mom using it, as a meat marinade. And my aunts used to make buttermilk fried chicken, yum. And buttermilk biscuits. When I was first trying to make that myself some years ago, is when I discovered that buttermilk was no longer a standard supermarket staple.

It kind of tastes like this middle eastern drink that I have had, which I found quite refreshing but a slightly different consistency than buttermilk.

I was also thinking of all these cultured/fermented dairy items. While many don’t like yogurt there are far fewer yogurt haters now than there were in the 1960’s - it’s now a standard snack, available at any deli or convenience store. Things like lassi and kefir are more health/specialty items, but still It’s odd that it’s easier to get commercially packaged kefir and lassi than it is to get commercial buttermilk. I wonder why it fell out of favor, and why it’s been so slow to make a comeback.

I didn’t grow up in the '60s, but my extended family was from dairy lands in the old country. I actually grew up on goat milk, I couldn’t stomach cow milk as a child, but as I got older the buttermilk, because of the souring, was digestible, much like yoghurt. It’s quite common, I believe.

the buttermilk, because of the souring, was digestible, much like yoghurt. It’s quite common, I believe.

Yes, I didn’t even mention that aspect of it, but people with lactose intolerance usually can digest buttermilk, as opposed to “sweet milk”, because the lactose is replaced by lactic acid.

I remember thinking of it being sorta of old-timey, I guess, and also kind of Southern, both of which I think are true.

I think that is true. My Father-in-law was born almost 100 years ago near the coast of NC. He said leftover cornbread crumbled into buttermilk was his generations breakfast equivalent of cold cereal and milk. In the '80’s he complained that buttermilk had become too processed and no longer tasted the same. Perhaps what we have now is simply not as delicious as what was available in the past?

Funny, I have a quart of buttermilk in the fridge right now. I drink it by the glass. Good with hot buttered toast/jam in the morning. WF carries it. Delish in baked goods or pancakes of course.
Bought it to make a light salad dressing.
I think the texture of it — thick — is off-putting to some.

Yes- couldn’t think of the name!

I remember my father always having a carton of buttermilk in the fridge . I would take sips. Yuck. Yuck. As I am getting older I am turning into a him. This is the next step for me.

Another old time story: We remember finally trying Ratner’s dairy restaurant before it closed its doors. Of course buttermilk was on the menu, but we ordered “sour milk” to go with the sturgeon[?]. Anyway, it too had some tang, but it was so thick and smooth that it was a bit of chore to drink from the glass.

Other late night snacks for her included rice and milk and bread and milk, both probably Depression snacks. She would put left over rice or torn pieces of white bread in a glass, pour milk over them and dig in with an iced tea spoon, then drink the remaining milk.

I don’t remember when I discovered yogurt but I remember the first yogurt drink I encountered, Borani, in the first NYT Cookbook by Craig Claiborne, the first cookbook I ever bought for myself. Wow!, that was amazing. I have remembered that over the years as being described as an Iranian drink but I just looked it up and it is described as being Pakistani. Funny, I love all sorts of Middle Eastern yogurt drinks but my favorite buttermilk or yogurt drink now would be Chaas, the Indian spiced buttermilk. I love to go to a chaat shop or vegetarian buffet and get some chilled Chaas. It’s not that different from the Borani I first had ca. 1970.

The Afghan version of dogh is also very good.

A few years ago I discovered Moru Curry, i.e., buttermilk curry, at Kerala Kitchen, a mostly take-out place near me. I had seen it on the menu board several times and was tempted but didn’t know how it was consumed. I was chatting with another customer who was wolfing down food at one of the few tables while I waited for an order to go and he had a pitcher of it on the table. I asked how it was used and he took the pitcher and poured it over a plate of rice and dug in. I rang the bell at the counter and ordered some to go with my order! I ate several plates myself before the day was over. Shades of my mother’s rice and milk, but a lot tastier. 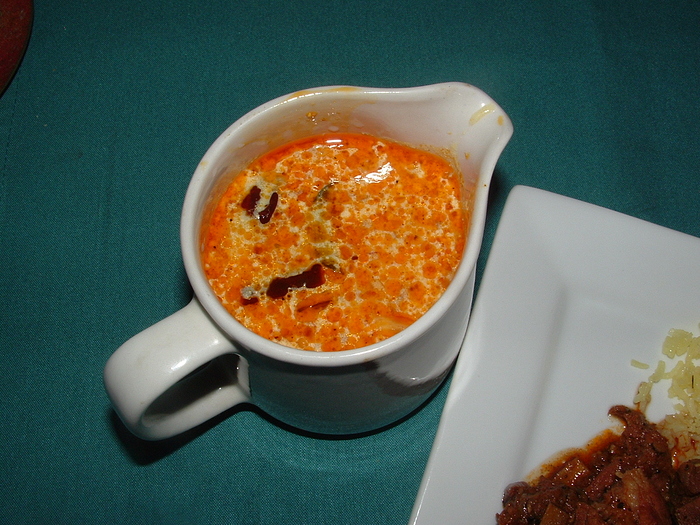 Back on the original topic. I was alive though out the 60s but I don’t remember ever having any of those dishes or even hearing about them. I never would have been served any of the dishes involving Miracle Whip at home, I know that much.

I wonder which foods our grandchildren will laugh at us for eating?

And I admit, I would consider eating this, but no mayonnaise and with capers instead of sweet pickles. 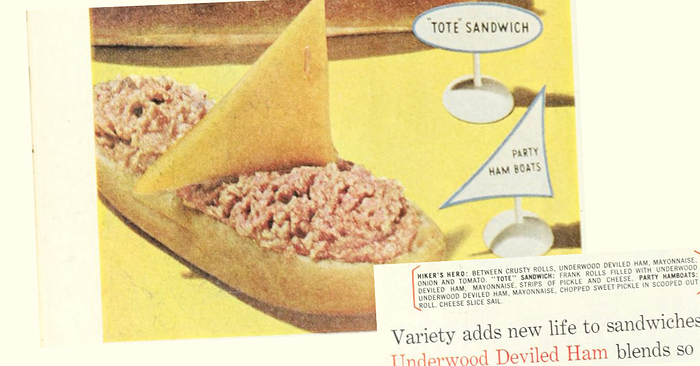 loved fruit cocktail when I was younger, except the peaches.

The peaches were the part I loved! Hated the pears. Found the grapes quite creepy.

Fruit cocktail was my grandmothers go-to snack for visiting children. Hawaiian Punch too!