I don’t get it. I choose Subway for a quick sandwich usually when I’m on the road. Today I went to a Jersey Mike’s for the first time in a very long while. The price difference is astounding… unless I missed something. At Subway a Cold Cut Combo 6" is around $3.75 (depending on where you are). A similar sub (adjusting for the Jersey Mike’s regular size being a bit bigger) is a lot more. $7.59 vs. $3.75 (adjusting the Jersey Mike’s for size would make it around $6.00 to be fair.) … still 60% more! Like I said… I don’t get it. To me, anyway, there was no perceptible quality difference on this particular sandwich.

I would take Jersey Mike’s over Subway any day. The bread tastes much better, as does the meat, which they slice to order. The toppings are also better – they have cherry pepper relish, for one. It’s a wider sandwich too – Subway bread is baguette width, while JM bread is french bread wide. And their cheesesteaks are pretty good, whereas Subway’s are forgettable.

I think it depends on the franchises near you, but in my area, JM wins hands down.

Hmmmmm. I had the Super Sub and thought it had less meat on it than the Subway Cold Cut Combo. It was a
A bit salty too. Also they didn’t slice the meat in front of me so I have no idea if they do it on site. I guess I need to try different subs there but they’d have to wow me to get the value. We have a sandwich place near me (Tudor and Spunky’s) that beats Mike’s by a mile. Maybe 10% more $ but there I see a definite value. I guess it’s just one more example of YMMV.

If you cannot perceive a quality difference, then count yourself lucky to save bucks at Subway or unlucky to have a crappy Jersey Mike’s near you.

Jersey Mike’s is no genuine sub/hoagie from Philly, but it beats by miles the Subway offerings, from bread (Subway bread is like macerated styrofoam) to fillings. Try Mike’s Favorite with olive oil and vinegar. The works. They should slice the meat in front of you.

Best sub I ever had was at the (alas) now-closed Salumeria in Reading Terminal Market, Philadelphia. But Philly still does sandwiches like nobody’s business.

Trying to get with the program here. The Help menu fir my nearest Mike’s doesn’t show a “Mike’s Favorite” but does have this one. It’s a hot sub, which is not what I’d prefer, but I’m willing to try if you say it’s their best. 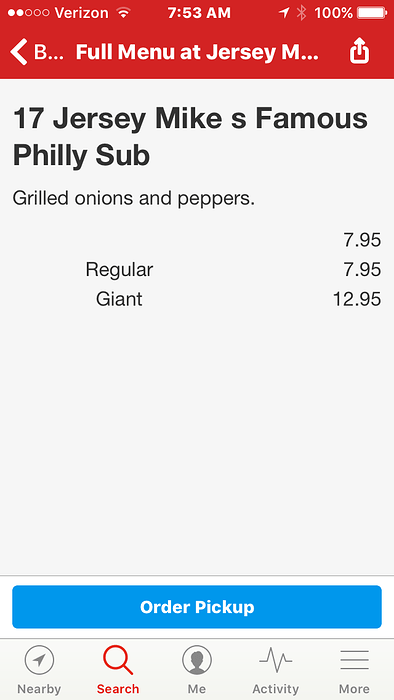 Also they didn’t slice the meat in front of me so I have no idea if they do it on site.

They normally slice the meat right in front of you when making your sandwich. That’s part of their “schtick”. If they didn’t do that, I’d question why.

I think @badabing might be referring to getting the sandwiches made “Mike’s Way”, which is adding the oil, vinegar, seasonings, etc to whatever sandwich you order. For cold sandwiches, I like the roast beef or the Jersey Shore .

I don’t have a dog in this fight as I hardly ever get sandwiches. But I was curious to find out more. Subway’s cold cut combo is all turkey based products which are way cheaper than what’s on a cold sub at Jersey Mike’s ("#2 - Jersey Shore’s Favorite" - Provolone, ham and cappacuolo)

Very interesting info. They don’t hide it deeply but I doubt most people know. Not sure how the price is affected.

I haven’t had their Philly Cheesesteak at Jersey Mike’s and am seriously doubtful that they’ll do justice to it, because Philly cheesesteaks need to be fresh chopped on a griddle (which Jersey Mike’s doesn’t use) with ribeye steak (albeit perhaps select grade) and the cheese options and the breads are crucial.

Boogiebaby is right that I was referring to a cold sandwich that uses oregano and olive oil and vinegar and S/P etc., instead of being a Mayo/Mustard prep. They’re quite decent, and better than anything at Subway.

One of Subway’s big draws is the pricing. On the other hand in NJ Jersey Mike’s is a bit overpriced compared to what any local sub shop is putting out.

However the difference in their meats is pretty clear IMO. Roast beef is probably where the difference is the clearest. Jersey Mike’s puts out proper pink rb whereas subway uses that weird brown slimy roast beef that all the cheapo places use (see Wawa, Quick Chek, etc).

I haven’t had their Philly Cheesesteak at Jersey Mike’s and am seriously doubtful that they’ll do justice to it, because Philly cheesesteaks need to be fresh chopped on a griddle (which Jersey Mike’s doesn’t use)

Not sure if that varies from store to store, but the 2 Jersey Mike’s by my house here in So. CA does use a griddle and a sharp metal spatula thing to chop the meat as it cooks.