When the Michelin Guide returned to Southern California and awarded CUT by Wolfgang Puck 1 Michelin Star, it marked the first steakhouse in So Cal to garner that award. While Michelin doesn’t always get it right, its awarding of a star to CUT felt right in this case. It says a lot about a restaurant when as of 2021, Chef Wolfgang Puck’s flagship Spago has lost its Michelin Star (for 2 years now), but CUT, his concept for a modern steakhouse, still has one.

CUT is one of those restaurants that we weren’t sure was going to survive the pandemic. A fine-dining modern steakhouse, it was closed for all of pandemic 2020 and most of 2021. A steakhouse’s menu doesn’t translate very well for takeout orders (which is what many restaurants were pivoting to during the pandemic shutdown), and it had no space to set up outdoor dining, either. But thankfully, after nearly 1.5 years of being closed, the OG CUT by Wolfgang Puck, in Beverly Hills, has reopened. (The one loss during the closure was the departure of former Chef de Cuisine Hilary Henderson, replaced by Chef Drew Rosenberg.) 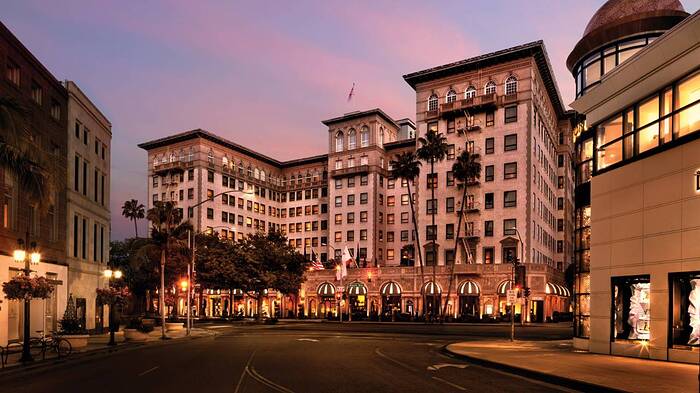 Located inside one of L.A.'s most famous hotels, the Beverly Wilshire (a.k.a. where Pretty Woman (Richard Gere, Julia Roberts) was filmed), on any given visit you will find a row of exotic cars lined up for valet parking.

Just walking into the Beverly Wilshire Hotel to get to CUT sets the atmosphere that you’re in a classy, beautiful location. 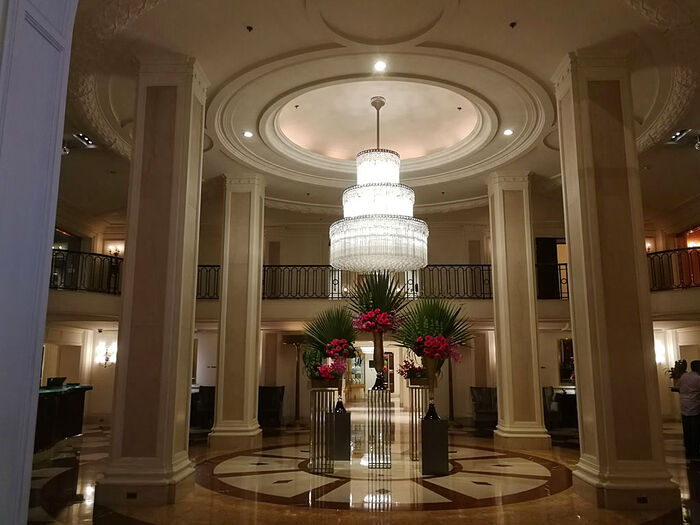 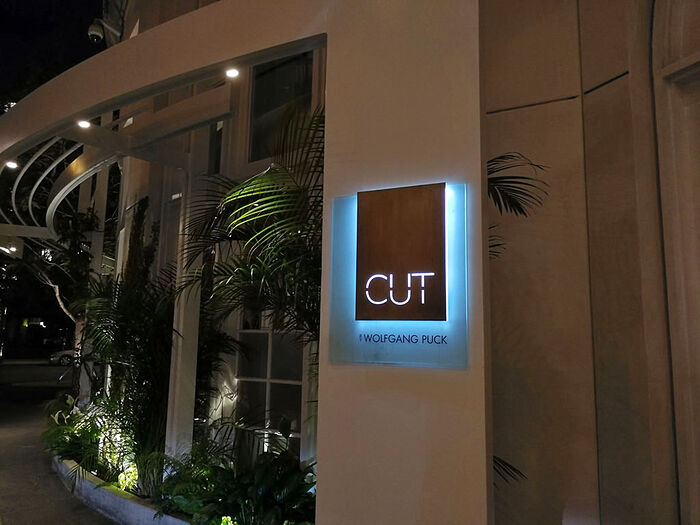 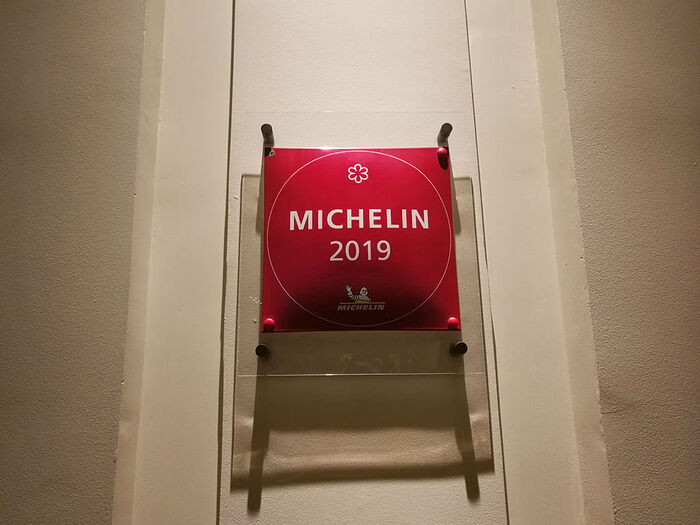 Entering the CUT dining room itself, the ambiance is minimalist modern, with a touch of whimsy. The soundtrack playing in the background is set to low, so you can hear each other talk without shouting, but if you listen closely, you realize that it’s '80’s Rock and Heavy Metal, ranging from Dio to Van Halen to U2 and beyond.

(Apologies in advance for the bad photos - the dining room had low lighting.) 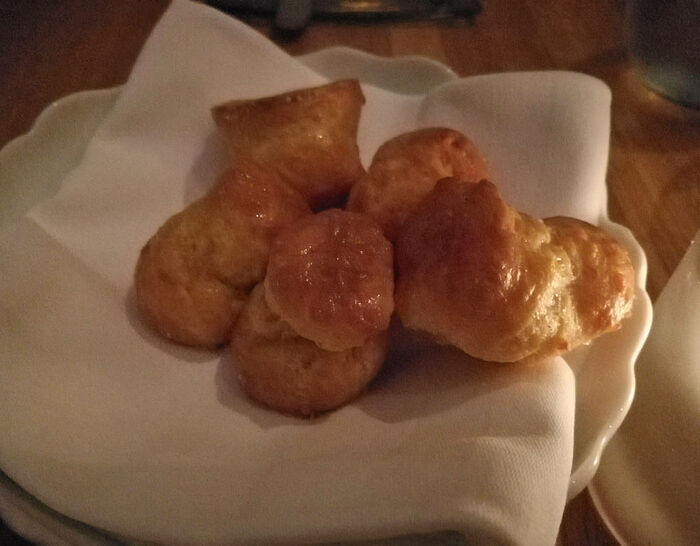 Just as in the before times, their complimentary take on the Brazilian Cheese Bread, Pão de Queijo, was piping hot and filled with gooey Cheese on the inside. Delicious!

As with previous visits, the server will bring out a selection of Steaks being offered this evening, explaining the different cuts, pointing out marbling, etc.: 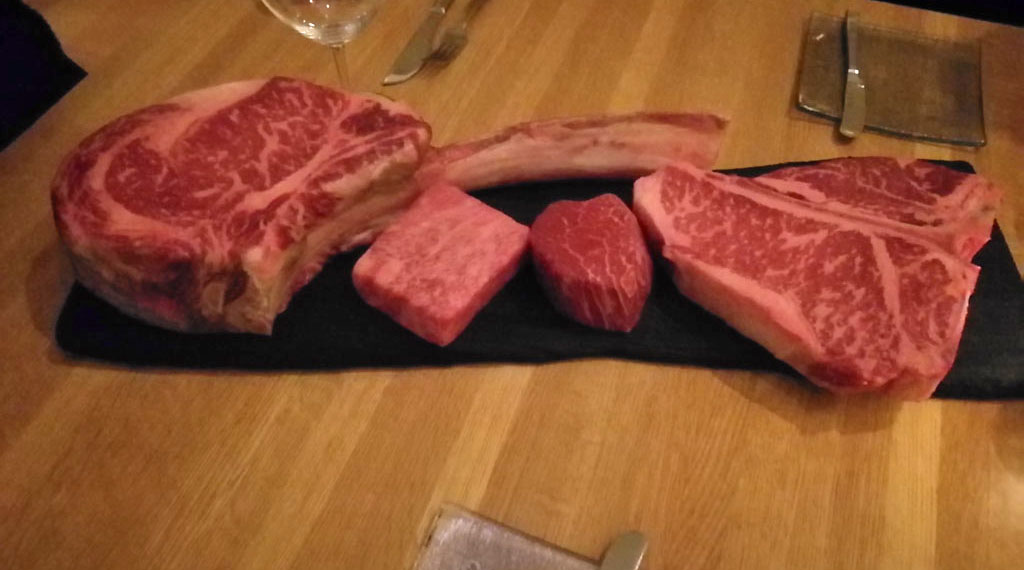 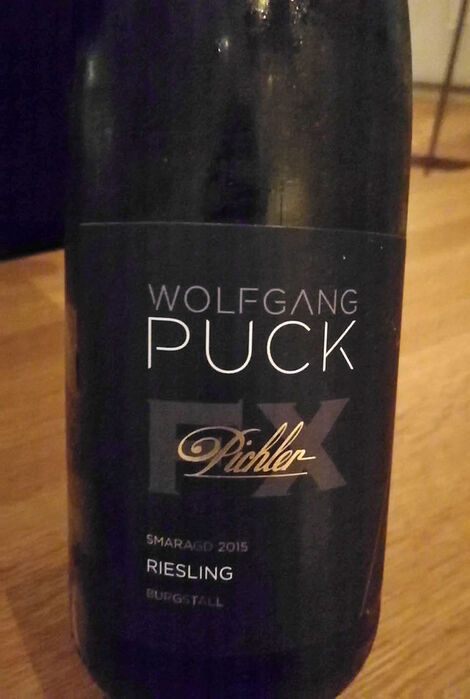 We began with a glass of the Puck | FX Pichler, “Loibner Burgstall” Smaragd, Wachau 2015 Riesling, and not because it bore Wolfgang Puck’s name on it, but because it was a genuinely good Riesling that Chef Puck happened to have worked with this producer on. Light, refreshing, good minerality and gentle sweetness. 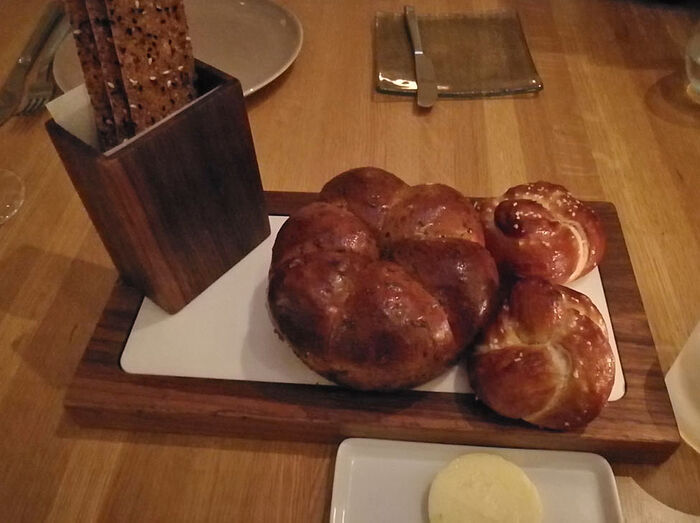 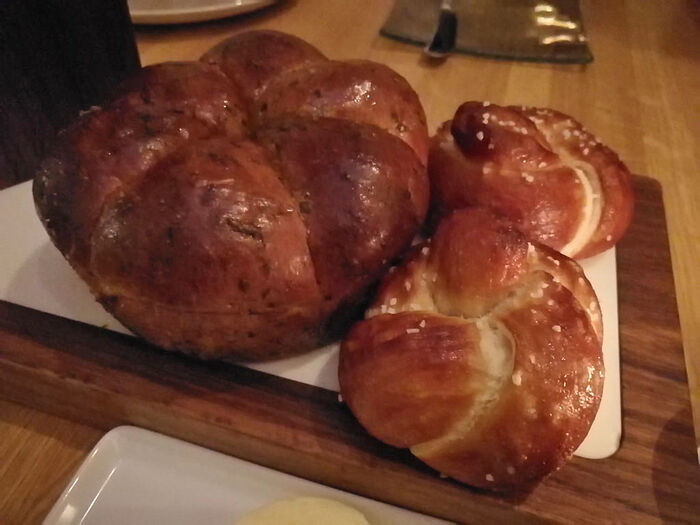 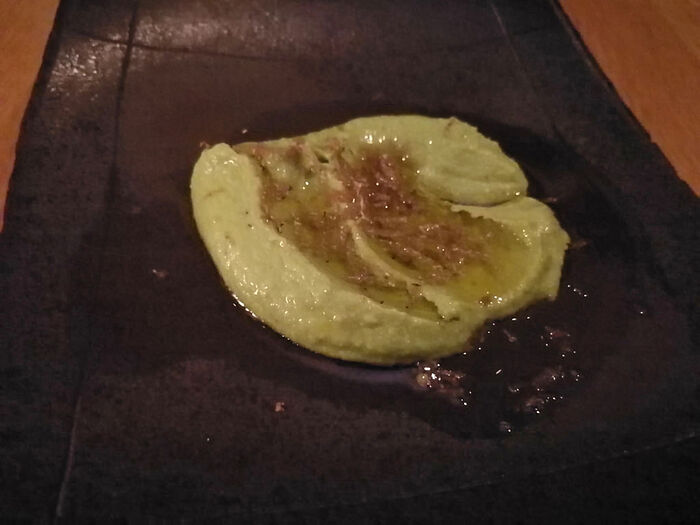 One change from the Before Times, is that the previous Complimentary Bread Service is no more. Perhaps to reduce the number of servers wandering around the dining room (as there used to be a few staff members devoted to just walking the dining room with rounds of fresh Bread for customers), or maybe to recoup some of the costs of being shut down for nearly 1.5 years, but now the various fresh-baked Bread offerings have to be ordered as a separate menu item, but they’ve included a Truffled Pea Hummus as a new addition.

The Pretzel Roll was still baked with a nice chewy density (but still light), but it was the new Brioche roll that was the star: Airy, fluffy, delicate and warm-hot, it was delicious with the Vermont Butter, but especially the new Truffled Pea Hummus. 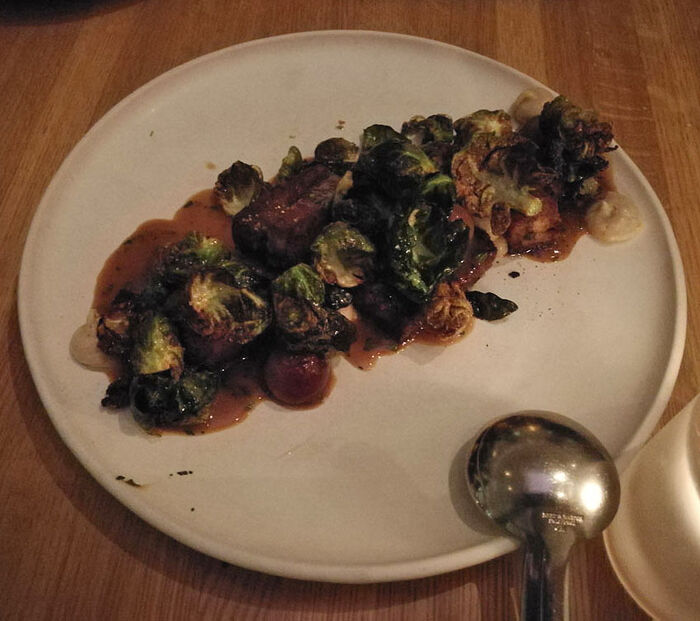 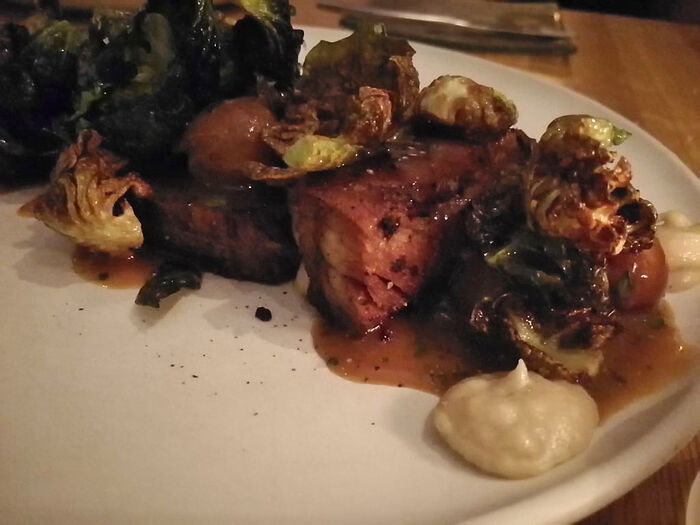 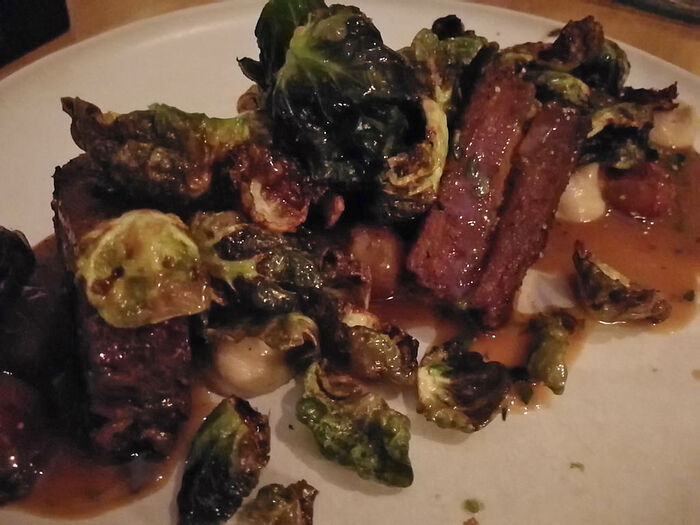 A new Appetizer menu item, the Apple Glazed Pork Belly was sweet and savory, a nice lean and fatty Pork ratio, and since it was roasted, a lot of the excess fat was rendered out, which helped reduce the potential heaviness of the dish. It was also a great pairing with the 2015 Riesling. 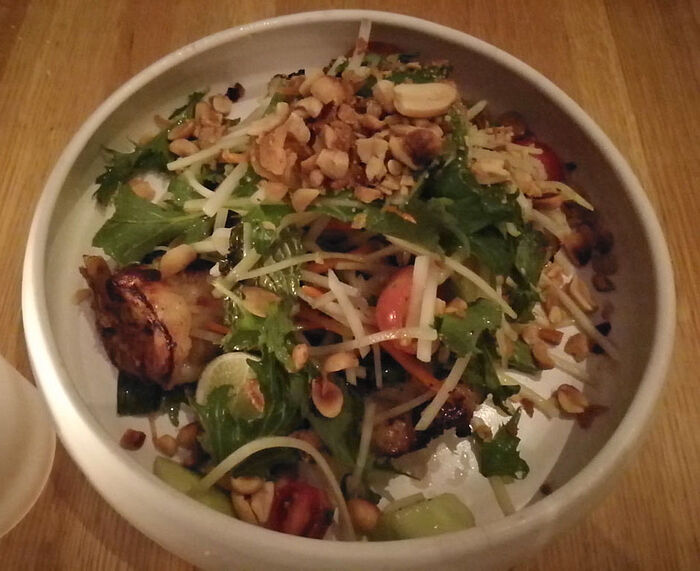 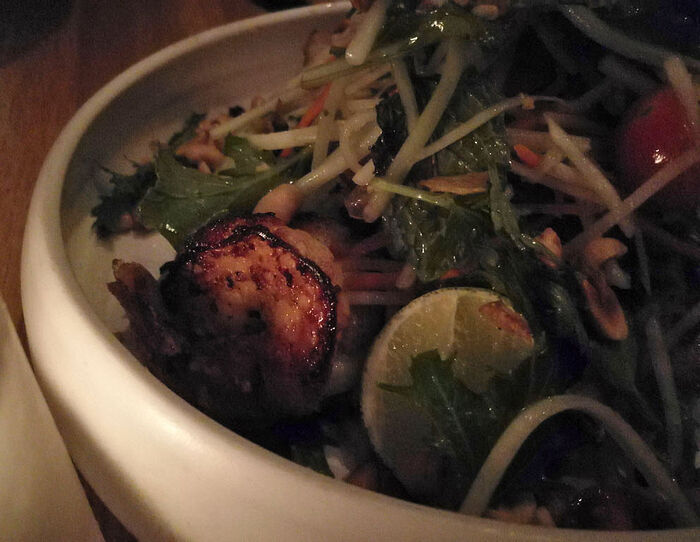 A surprising dish, this felt more at home in one of the local Thai restaurants than at a normal steakhouse, but this is what Chef Wolfgang Puck and team do to make CUT stand out over the years. The seared Shrimp were plump, properly cooked, and delicious. The pairing with fresh Lime, Green Papaya slices, cooling Cucumbers and Crispy Garlic, tossed with Fish Sauce really made each bite pop in a bright, lively way. Excellent!

And the pairing with the 2015 Riesling was flawless!

At this point, Chef-Owner Wolfgang Puck emerged from the kitchen and started making the rounds, greeting every table, personally thanking each customer for visiting the restaurant!

That was a nice touch and we asked what Chef Puck would recommend drinking with our Steaks this evening. He recommended the: 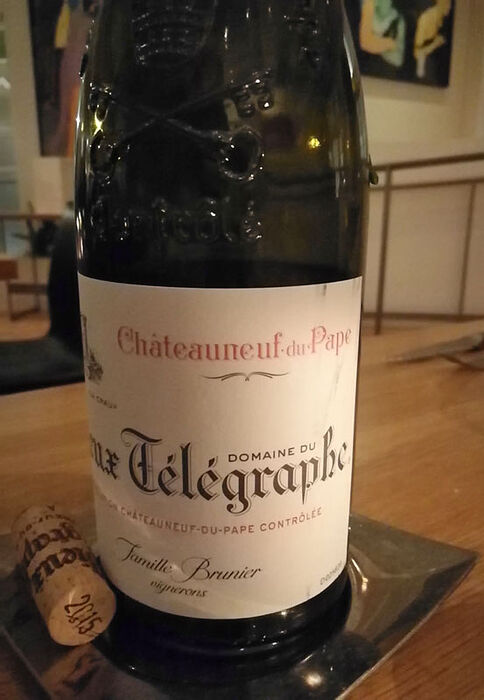 This was delicious: Jammy, raspberries, cherries, fruity, but balanced, nice mouthfeel, and it turned out to be a great pairing with our Steaks.

Our Sides that accompanied our Steaks arrived at this point. 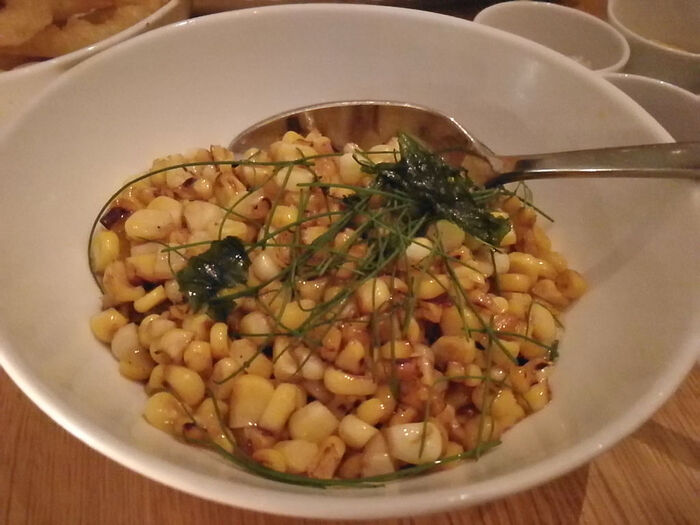 Excellent. This was a much appreciated, lighter Side dish, sort of like an interpretation of the usual Creamed Corn served at various old-school steakhouses. Here, the Caramelized Corn is naturally sweet, plump kernels, gently seasoned. The Smoked Eggplant was great complement to the Corn, with a soft, lightly smoky texture contrasting the plump, firmer bites of the individual Corn kernels. 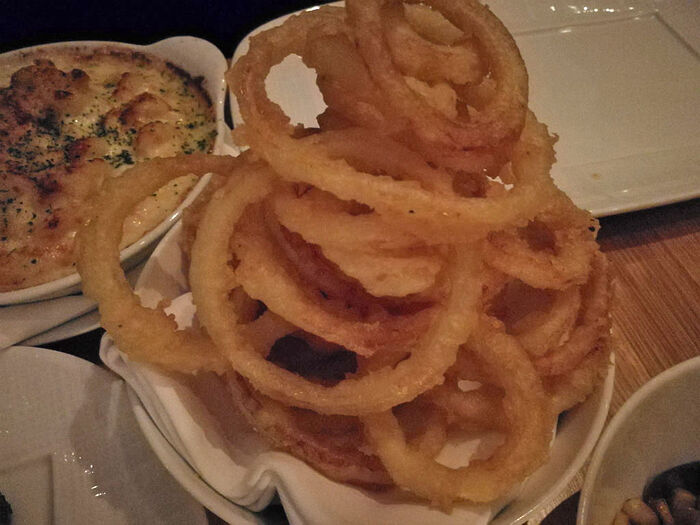 Pictures don’t do this justice, but CUT brought back one of their OG Sides (I missed out on this previously): The Tempura Onion Rings might be one of the best Onion Rings I’ve ever had in my life! It starts with the light, delicate Tempura Batter, which lets the inside Onion’s flavors shine. They were nicely fried, and on their own were already fantastic, but with the Black Truffle Ranch (which was a much looser, delicate Housemade Ranch Sauce, with Sorrel) it was even better! Just an excellent bite all around. 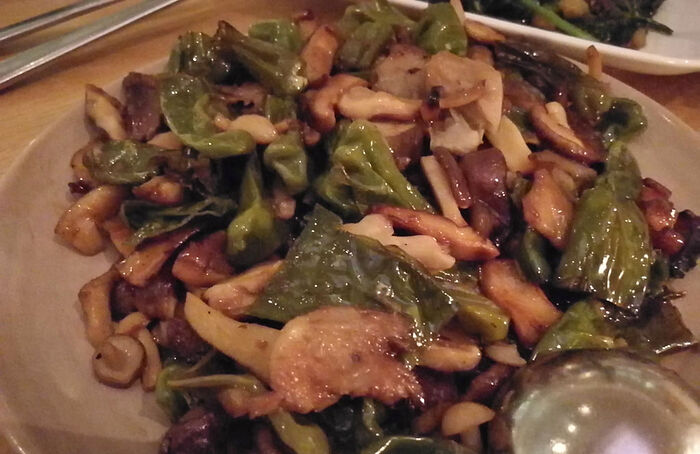 I love Mushrooms and Shishito Peppers, so this seemed like an automatic winner. Unfortunately, it was the only misstep of the evening: This was excessively sweet, and too much Mirin was used in the cooking, giving it an almost Dessert-like sugary sweetness that was off-putting. 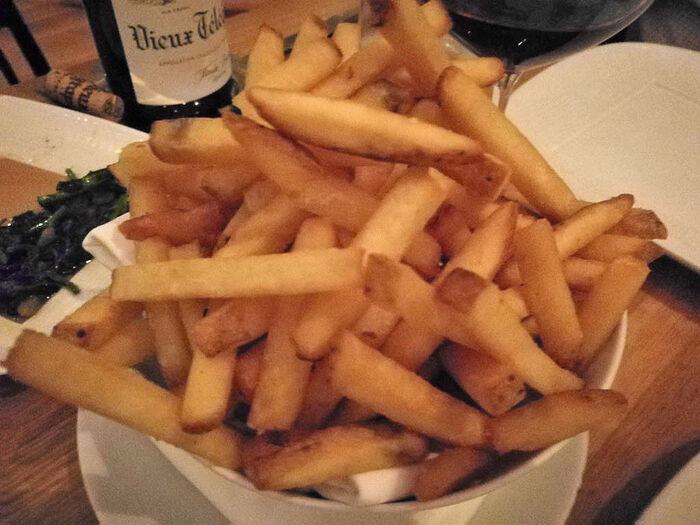 Connie & Ted’s Fries are still our favorite in the city, but these are a close second. 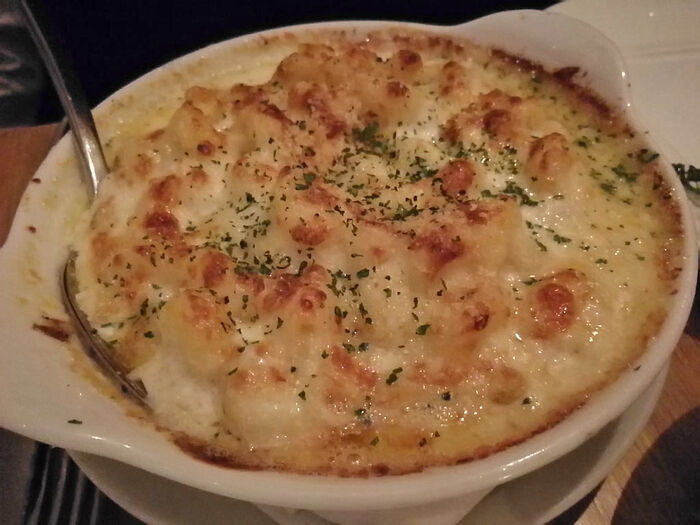 This is a very good version of Mac & Cheese, made with Cavatappi Pasta. It’s cheesy, creamy and balanced in each bite. 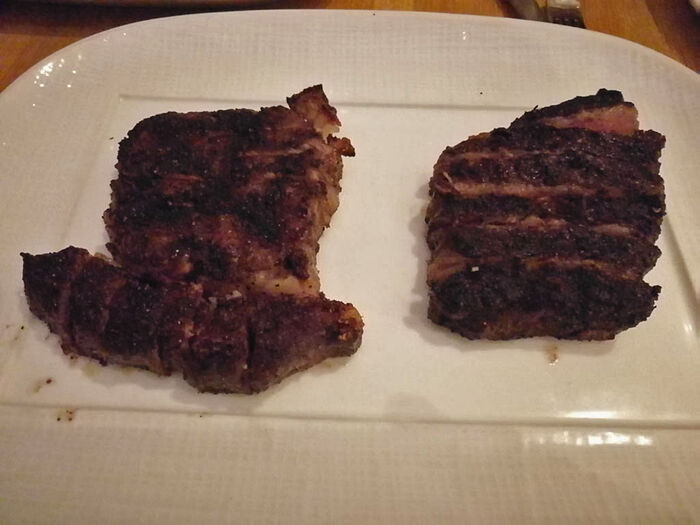 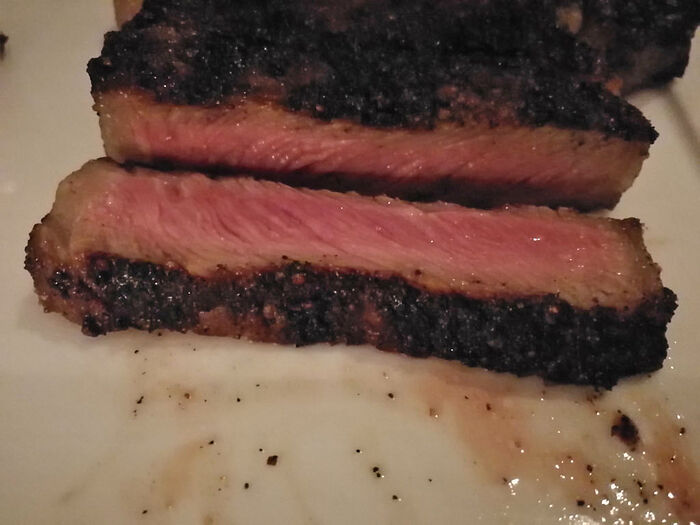 What makes CUT stand out from all of the other premium steakhouses around the city is in their preparation and cooking. They grill the Steaks over hard wood and charcoal, and then finish it under a 1,200 degree broiler. Taking a bite of this 35 Day Dry Aged Rib Eye immediately reminded us of why CUT remains the gold standard: 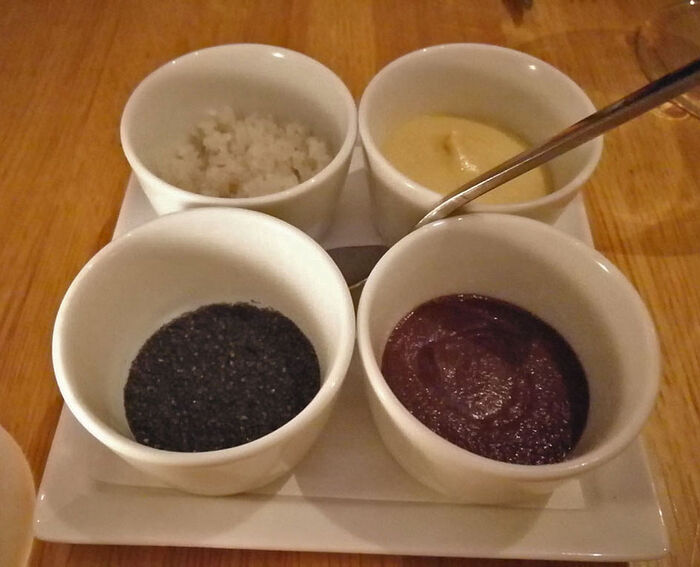 Changing things up slightly, the condiments for the Steaks feature Fleur de Sel (which is our favorite); a new Volcanic Salt, which was much more fine grained, but intensely salty; Dijon Mustard; and a Grape Skin Mustard (a touch sweeter).

But just a pinch of the Fleur de Sel, rough cut Salt is all you need with CUT’s Steaks. 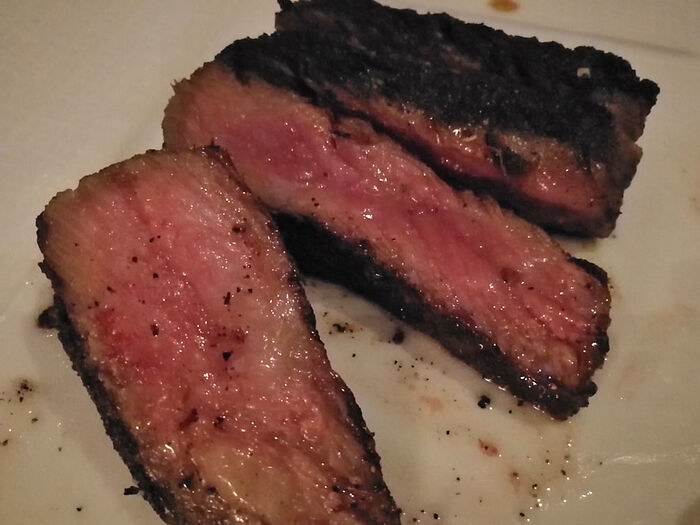 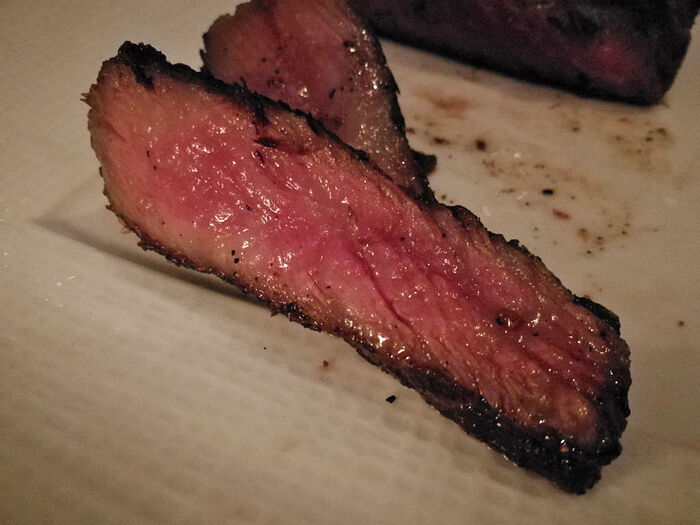 And the star of the evening (as usual), Grade A5 Japanese Wagyu Beef. On this evening it was a New York Strip cut from Miyazaki, Japan. Note that over the past few years, Grade A5 Wagyu (which is the highest grade for Beef in Japan) has become seemingly ubiquitous, popping up on menus around the country.

However, one bite of CUT’s preparation of a Grade A5 Wagyu Steak illustrates that just because it’s “Japanese Wagyu” doesn’t mean it’s the same. It is perfectly cooked (see pics above), a thin outer crust, and the Japanese A5 Wagyu Beef is a gorgeous medium rare all the way to the edge(!).

The first bite causes an involuntary smile and you get a bit of delicate smokiness before being hit with a gorgeous lush wave of delicate beefiness and luxurious beef fat that only Grade A5 Wagyu can provide. It is decadent, ultra tender, and the highlight of the meal!

We’ve had Grade A5 Wagyu a few times over the past few years and they don’t taste like this at all. Hats off to CUT on the execution.

We were stuffed, with no room for Dessert at this point. Next time. 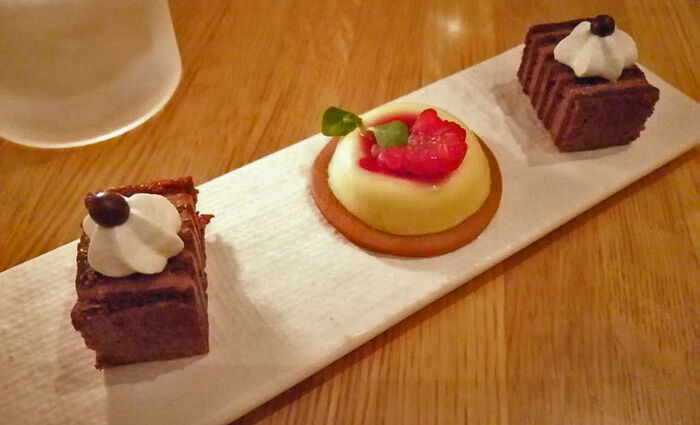 After being closed for nearly 1.5 years due to the pandemic, CUT by Wolfgang Puck has re-opened and it feels like they haven’t missed a beat. They lost their excellent Chef de Cuisine sadly, but Chef Drew Rosenberg seems to be doing just fine with the re-opening. CUT remains an outstanding, classy steakhouse, and their creative, interesting Appetizers and Sides remain a strong highlight of the meal. Their new Shrimp a la Plancha (with Green Papaya, Cucumbers, Crispy Garlic, Fish Sauce) is a great addition. Their Sides shine, especially their Tempura Onion Rings (with Black Truffle Ranch), Hand Cut French Fries (always a delight), Caramelized White Corn & Smoked Eggplant and more.

But ultimately, it’s their top notch grilling and execution on their Steaks that continue to serve as the core. It starts with excellent sourcing (specific Beef specialists around the U.S. for American Beef Steaks; or top-notch Grade A5 Japanese Wagyu from key prefectures in Japan), CUT’s distinct grilling and finishing methods, and then slicing the Steaks to the right size pieces every time. Great beefiness, delicious bites and a gorgeous setting all make CUT a destination for a great celebratory meal and an enjoyable evening.

CUT Beverly Hills is now open As the original location of CUT, this Wolfgang Puck Fine Dining restaurant consistently ranks as one of the most sought-after steak restaurants in the United States. In June 2019, CUT was awarded a coveted star by...

But ultimately, it’s their top notch grilling and execution on their Steaks that continue to serve as the core.

It’s funny, but I find that the true strength and raison d’être of Cut are its side dishes.

I can see that.

Their sides are stellar. What are your favorites over the years?

Probably forgetting some, but those are the highlights.

Oh! The Bone Marrow Flan was not on the menu on this most recent visit. I hope it was just a temporary thing as they get their staff and operations back up and running full time.

I’ve never had the Uni Crab Toast, but it sounds amazing. Hopefully it’s back on the menu soon as well.

Other dishes you may or may not have tried before:

The roasted Maine lobster is amazing. They also had a crispy duck dish and a delicious braised short rib. Also during spring, they had a pea dish that was spectacular, it had pea tendrils. English peas and snow peas. Oh yeah, and the ahi tuna tartare probably my favorite appetizer they offer but it comes and goes on the menu.

I wish I could taste them

And yes! Fresh English Peas, I’ll have to look out for that come Springtime. Thanks!

I have never tried to eat meat in a restaurant that has Michelin stars, but it is one of my dreams. I have never been a cook, and I didn’t even finish any courses, but I can tell that cooking is my hobby, and everyone who tried the steaks that I prepare said that they are fantastic. I read many cooking books and blogs. My favorite book is The MeatEater Fish and Game Cookbook: Recipes and Techniques for Every Hunter and Angler and my favorite blog is meatsumo. Due to these sources, I can get pleasure from eating.

Yeah, meat cooking is an art

It has been far too long since I’ve been to Cut, and now I have the confidence to go back

It’s always great to see an OG from Chowhound back.

Thanks for the kinds words. CUT is still a great meal out, nice setting, service and the dishes were still as great as before. Enjoy!