Oh, where to begin!

This is a place Justin and I pass often when getting pizza from Milano’s in nearby Perth Amboy. We made it a point to come here eventually, and tonight was the night. We took my mom along.

We started with drinks: beer for Justin, wine for mom, and I had a Stoli martini whilst channeling my inner @NotJrvedivici. I should have realized this wasn’t a place for a martini when the waitress raised her eyebrows and said in a kind of musical tone, “Oh, a martini!” It ended up being very well made. 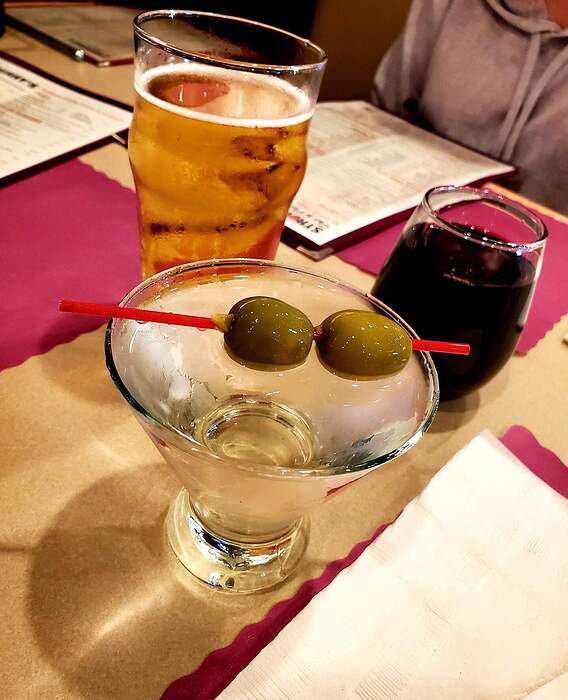 Appetizers were truffle fries and Buffalo calamari. Again, both were very good. The calamari was perfectly tender though soggy and losing its coating from being tossed in sauce. Perhaps it would have benefited from the sauce being poured over it, but overall, an enjoyable app. 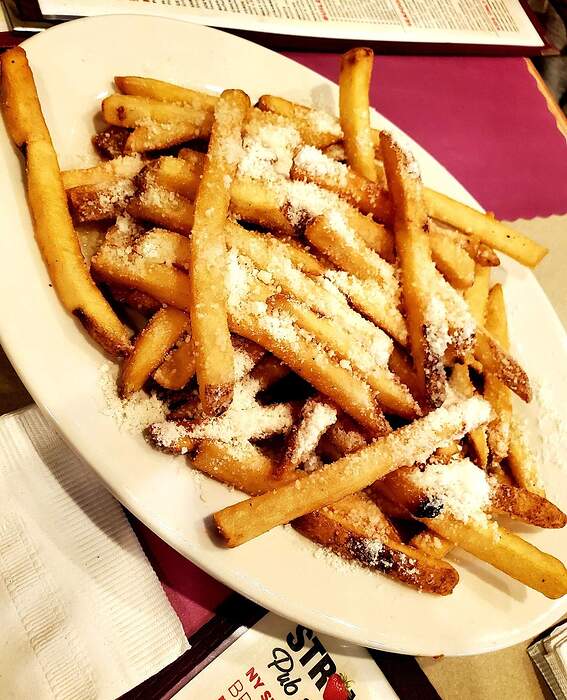 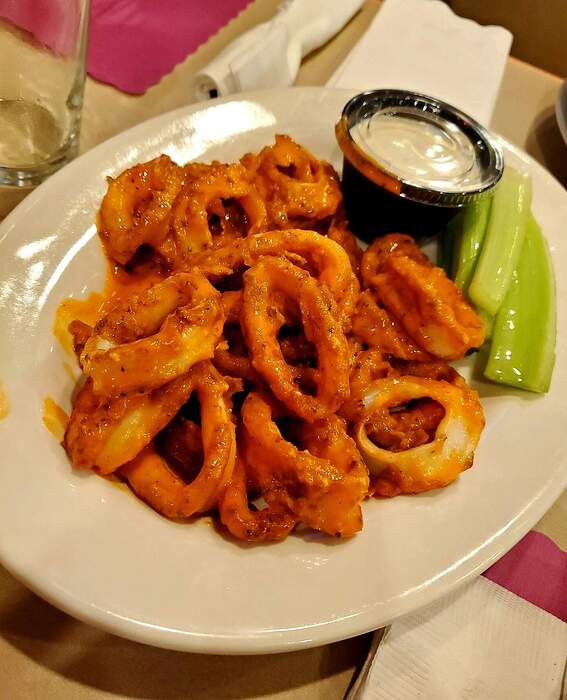 We were thoroughly enjoying the night at this point when it started to turn. At 8 PM, our waitress came over and said “You haven’t ordered meals yet, we close in a half hour”. I looked at the absolutely packed bar/restaurant and thought it was a joke. Sure enough, kitchen closed 8:30, restaurant at 9. We had no idea! And so we ordered: mom with a pizza with half eggplant and half mushroom, Justin with a cheesesteak, and me with something called Penne Brioni: penne with vodka sauce, eggplant, prosciutto, and fresh mozzarella to which I added grilled chicken.

Literally 10 minutes later, the cheesesteak and pasta arrived. His was kind of sad looking, though he said tasted fine. My pasta, meanwhile, was just regular penne vodka with chicken-- none of the other stuff. I dug through it looking for eggplant and prosciutto while we waited for her pizza to come. None was to be found.

Anyway, her pizza finally arrives and this was the laugh of the night! The runner sets the pizza on the table and announces “Pizza with eggplant and mushrooms”. But the pizza was half grilled chicken and roasted red peppers and half plain. We said we didn’t think this was the right pizza and he just shrugged his shoulders and said he’d get the server. I tried to say my pasta was wrong too, but a lost cause. I know runners aren’t responsible for kitchen mistakes but a little common sense here?

Our waitress came and was horrified that it was wrong, and also that my pasta was wrong. My mom mentioned that when they remake her pizza to leave off the oregano. She said okay. Our meals are taken and immediately her pizza hits the table (the guy probably grabbed the wrong one). The waitress apologized about the oregano but since my mom didn’t ask previously, there was nothing they could do. WE WERE FINE WITH THIS! IT WAS A SECONDARY REQUEST. But a minute later, she comes by again and takes the pizza, saying they will make her another pizza with no oregano. We said it was fine but she insisted. My pasta eventually came and was correct, though there was still no eggplant to be found. 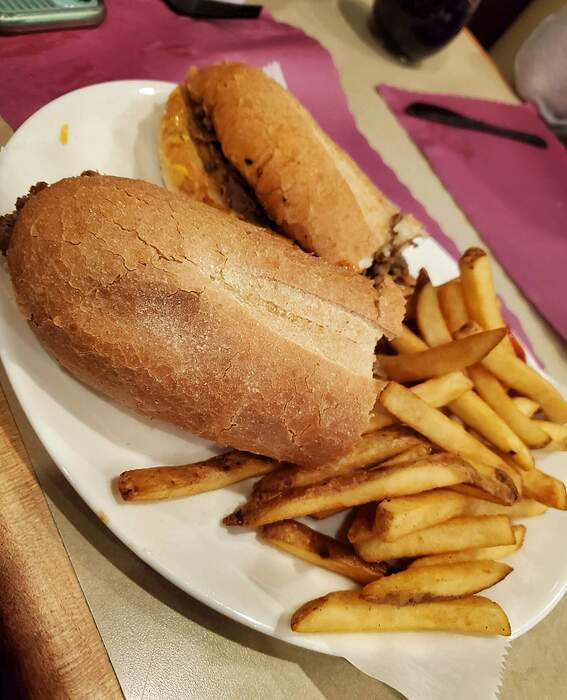 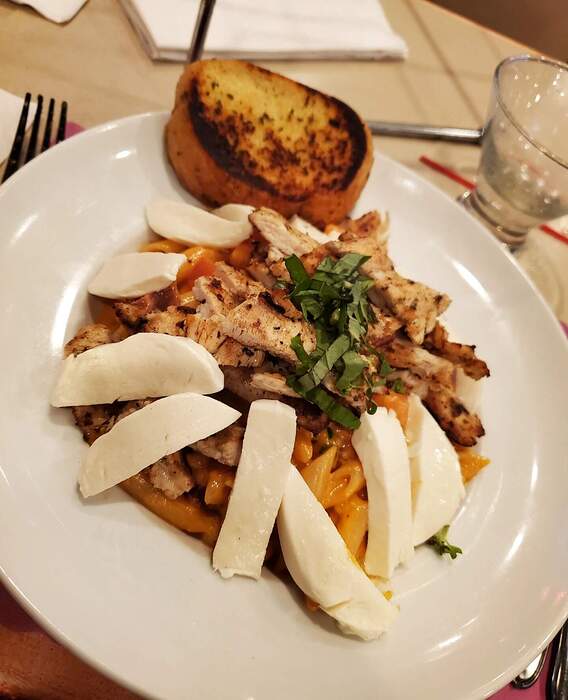 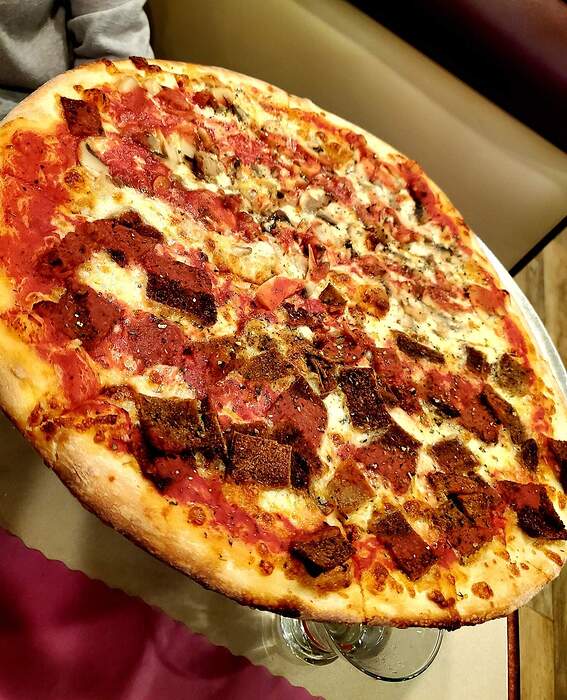 Funny enough, about 5 minutes later, the same food runner set Buffalo wings and waffle fries down at our table while we were finally eating and we had to say they were not ours. Another shoulder shrug from him, before he picked them up and brought them to the next table. Seriously, this one individual was costing the place money with so many mistakes. Not on this last one, but if the pizza and pasta were simply someone else’s brought to us mistakenly? As someone now in the food service industry, I have to say, come on man!

When I rate this on my blog it will be a 3 or 3.5. Mistakes never affect a final score if they are corrected, which they were (especially going out of their way with my mom’s pizza). The food was adequate though not inspiring. I’m not a fan of Barstool Sports, but the pizza was rated on there and I don’t know what they were given. It was good. Better than a lot of places, but not as good as others. My pasta was fine, Justin’s cheesesteak was meh. We really enjoyed the apps, though. Food prices were fantastic, though my martini was $13.75 which is a little steep for the environment. But whatever.

After reading this, I seriously hope you went with a 3, not a 3.5. I’ve never been here, but everything you’ve described outright angers me. This is why I don’t eat out as often as I used to AND why I return to the places that do it right (or at least, far better). I guess the whole thing screams MNJR (Mediocre NJ Restaurant) to me.

Just by the photos the dishes don’t look very appetizing and something one can make much better at home, e.g. the pasta dish which looks like they didn’t really think about how to put it together that the different flavors incorporate etc.

Maybe because they were so concerned with closing. By the time they “fixed” my dish it was 8:30 and the back dining room lights were being turned off. Meanwhile the front dining area where the bar is was packed!

The more I think about it, I may give them a 2.5. The pizza saved it, but even that wasn’t spectacular. The cheesesteak which Justin would not describe with anything other than “fine” was really just plain unappetizing.

For anyone interested, here is my full review. And I indeed gave them a 2.5.

Strawberry’s Pizza and Pub of Woodbridge is a place that Justin and I have passed numerous times, usually when picking up pizza from nearby Milano’s in Perth Amboy. We always told ourse…