Any recommendations for dining in Stockholm? Heading there in April. A local will make reservations for a couple of dinners, but we are mostly on our own.

Been there last May.

Places we love:
Speceriet - Our favorite of the trip, everything was good there. No reservation for this small causal place, go early or late to avoid queues.

We went to Volt. I still don’t know what to think about this meal but at least I find 1 or 2 dishes really interesting. Hubby hated it. I think if you like Noma (DK) style cooking, go for it. I found the experience interesting, while some experiment could be good, others less successful. At least the meal won’t left you indifferent.

Don’t miss their 2 food markets. We had quite decent meal and bought home tons of smoked cured meat.

We had a hard time to find restaurants fitting in our schedule, we had a long weekend. Most good restaurant closed on Sunday and Monday.

Places I would like to try but no time:

You are welcome! Try to report on your adventure, eager to know more about Swedish food.

Well you have to go to a korvkiosk. Korv = sausage, Sweden’s most popular street food.

Here’s one from Serious Eats.

Not your style??? Just thought I’d mention it.

Are you just looking for fine dining or will you be exploring traditional Swedish foods? I hope to go in the next couple of years, exploring the foods and lands of my ancestors/relatives. I am thinking of braving the Stockholm winter so I can partake of a Julbord.

Whatever - have a good time and I’ll look forward to your report. Smaklig Måltid.

Well, you are full of surprises! Thanks for the tip, definitely not only fine dining. I know little of Swedish cuisine beyond lutefisk!

You can have my portion of lutfisk and also surströmming but you can push all the herring and gravlax you don’t want over to me. Surprisingly (to us in the US) perhaps, pork, not herring or salmon, was the most important meat on the traditional Swedish table according to what I’ve read.

I guess the Wikioracle article on Swedish cuisine is as good a starting point as any and there are lots of other resources and guides that come up with Google.

I follow Anne’s Food. She hasn’t been posting as much lately and doesn’t cook much Swedish food, actually, but she has a Stockholm guide section that may be of interest.

I would really hope to find some reindeer dishes but I understand that’s much more common in the north.

ETA: Re: the mashed potatoes and rak sallad on a hot dog - my 3rd cousin in Stockholm says serving mashed potatoes with sausage is traditional so it’s a no-brainer to a Swede to put mashed potatoes on a sausage sandwich. I like it better than crushed potato chips which is so popular in some cultures. But the rak sallad is like ketchup in America - some love it, some are refuse it.

Here’s the summary of eats this week.

By necessity we’ve had some hotel and museum meals, none of which were bad. I’ve had those tiny shrimp on toast several times, they are full grown shrimp I discovered, but much the size of young popcorn shrimp we find at home and give to toddlers.This shrimp is super tasty and served with boiled egg, mayo, dill and sometimes roe of some kind. Called Toast Skagen, I also had it as a salad version at a steakhouse called Griffin’s. 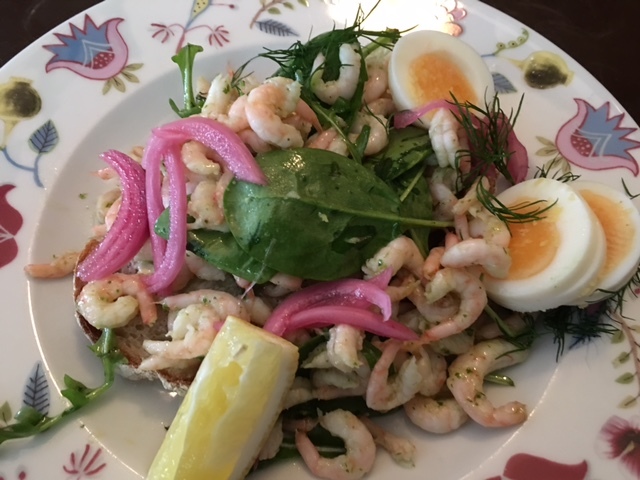 The above version was at a lovely cafe at Skansen Open Air Museum.

Taking naf’s tip, we looked up food markets and found Ostermalms Saluhall, a very old food market which as it happened vacated its centuries old building several days before we arrived and moved into very temporary digs a block away for two years, pending improvements to its permanent home. The building they are in now is held together with ply wood and glue. It does the trick, but they better hurry. 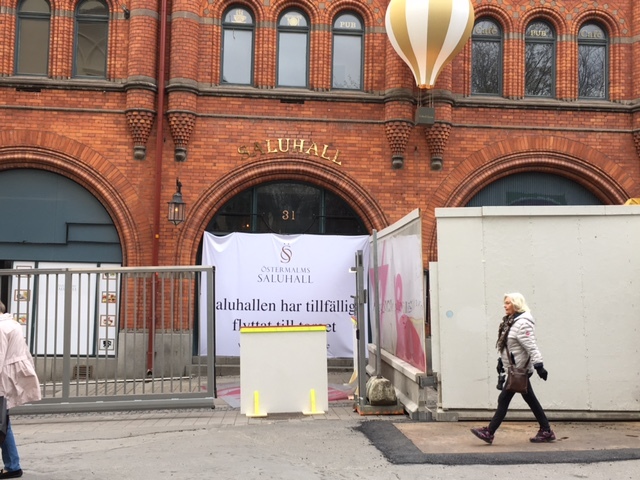 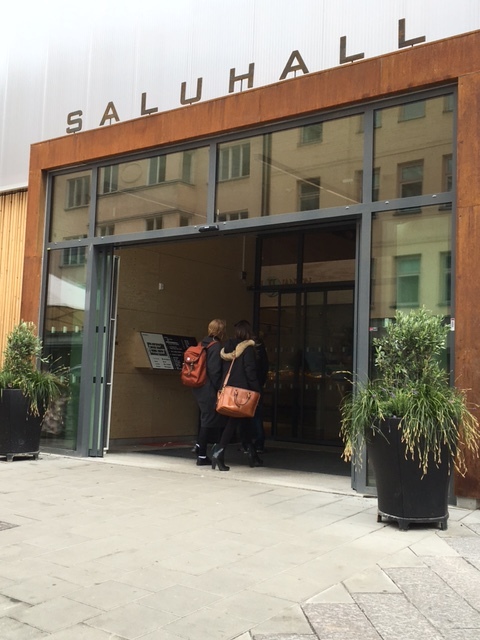 We decided to eat at a lunch counter there at which turned out to be a 100+ year old restaurant and seafood market and a favorite among many, Lisa Elmqvist. My sauteed perch with mushroom sauce was amazing. That sauce was so mushroomy and the fish served hot and perfectly cooked. The salt cured salmon and herring 3 ways was similarly delicious. 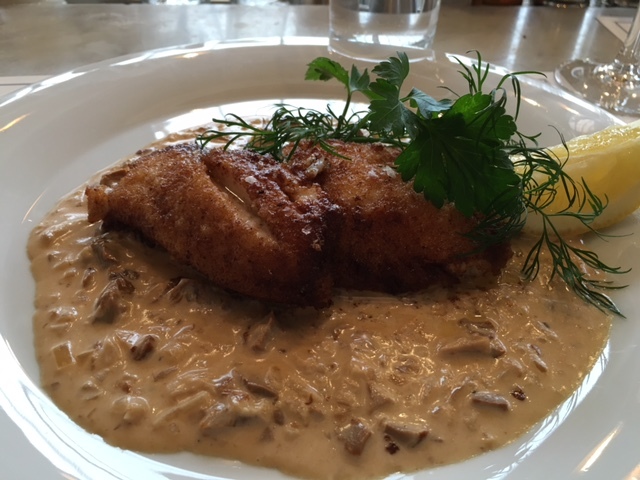 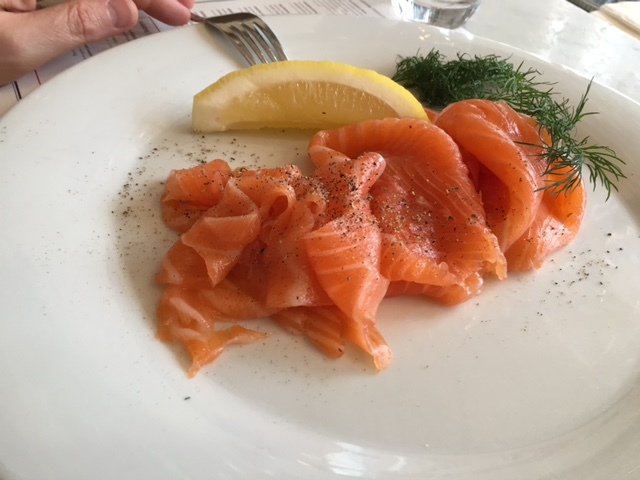 Nearly every meal comes with new potatoes as well. 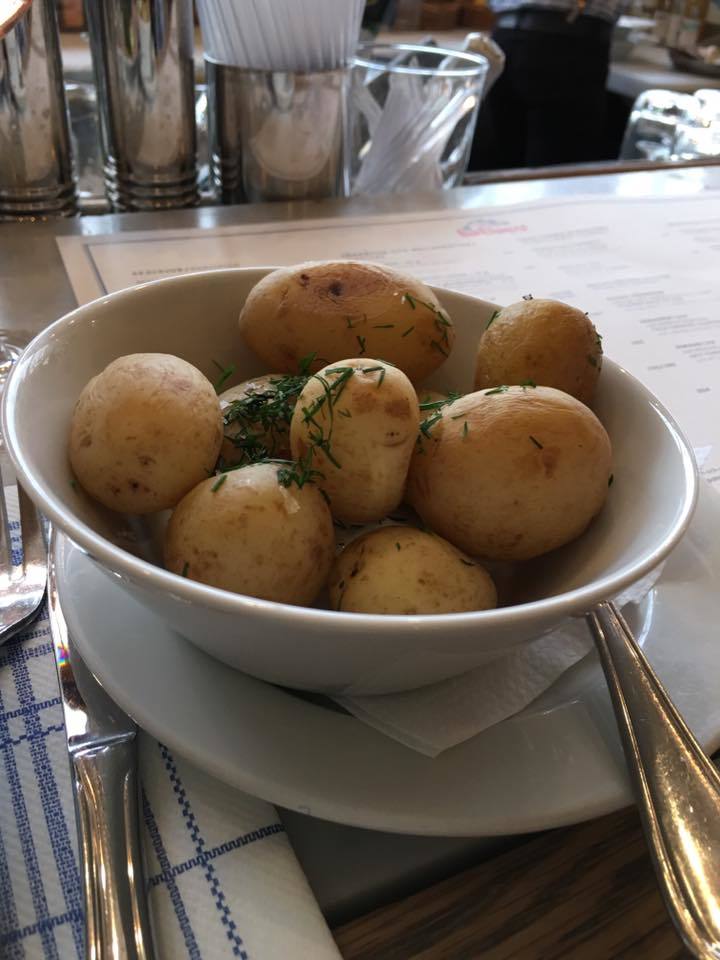 We also went to Den Gylndene Freden, which opened in 1722. We had a delicious meal there of herring, sausage, bleak roe (a menu staple about town) and gnocchi with soft cheese, sunflower seeds, wild garlic and onions. It was all wonderful. 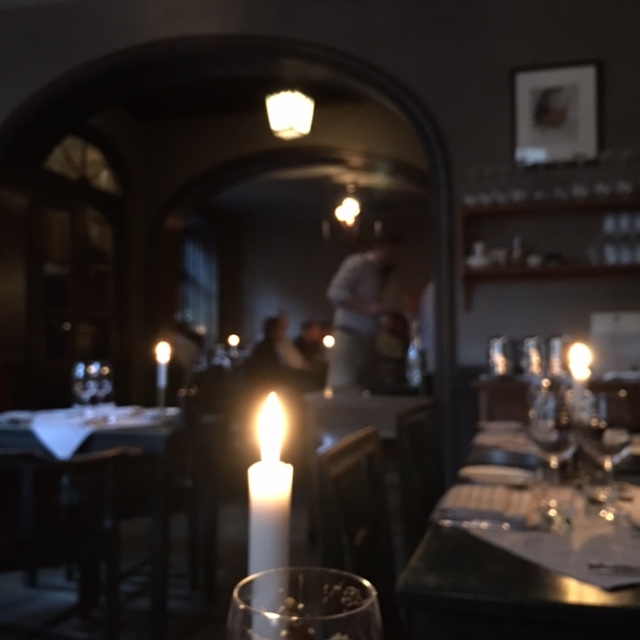 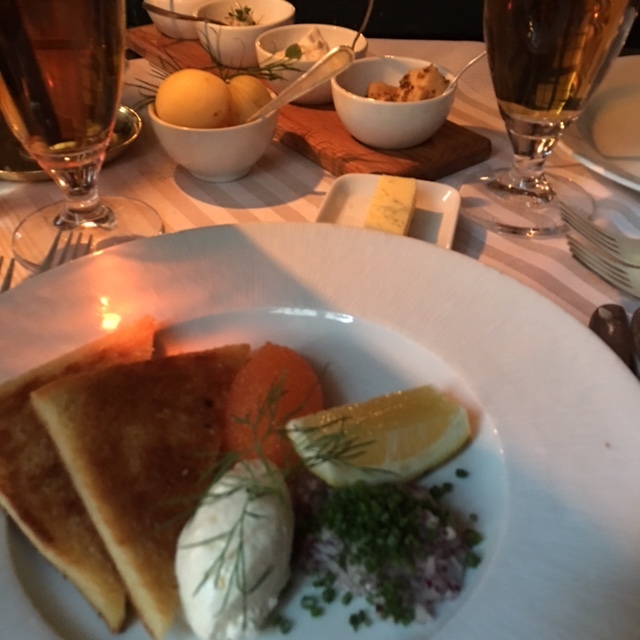 Also of note was B.A.R behind the Grand Hotel. Here you can pick your seafood or let them choose. We opted for a seafood tower that was just enough for a lighter lunch for two. Excellent food and service. 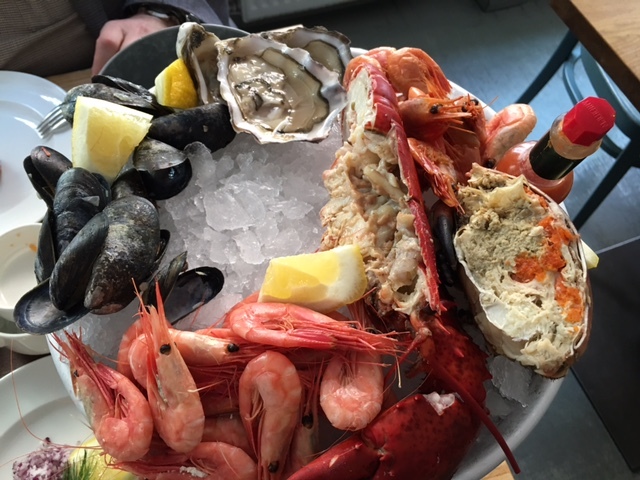 Then there was SMAK, a tasting menu popular restaurant that has a list of 20 or so “tastes,” i.e. lemon, truffle, yuzu, soy, cinnamon, walnut etc. Choose 3, 5 or 7 tastes and get the chef’s small plate featuring that taste. I’m not sure about this one, it was not my choice and I don’t think I’d go again. The first taste I chose included “oyster,” but the oyster was “oyster flavored mayonnaise.” The walnut taste desert was raspberry sherbet with a couple of blackberries and some cream. I found one piece of walnut under it all. You can opt for tiny pours of wine parings for each taste choice. Kinda gimmicky and not cheap, but the place was full.

Still have a day or so left and on my wish list is the smorgasbord at the Grand Hotel, said to be the best in town, and a hot dog from the kiosks, Bruce mentions. I still can’t speak Swedish though, the language confounds me.

Erik’s Gondolen, a restaurant suspended above the water and providing spectacular views. The fish was well prepared and came topped with some trout roe. 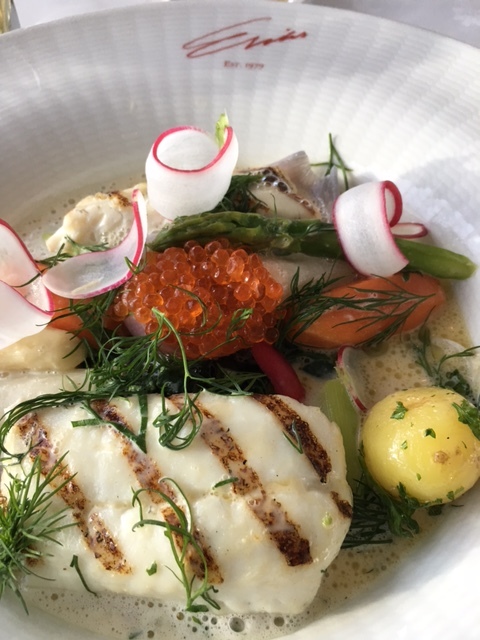 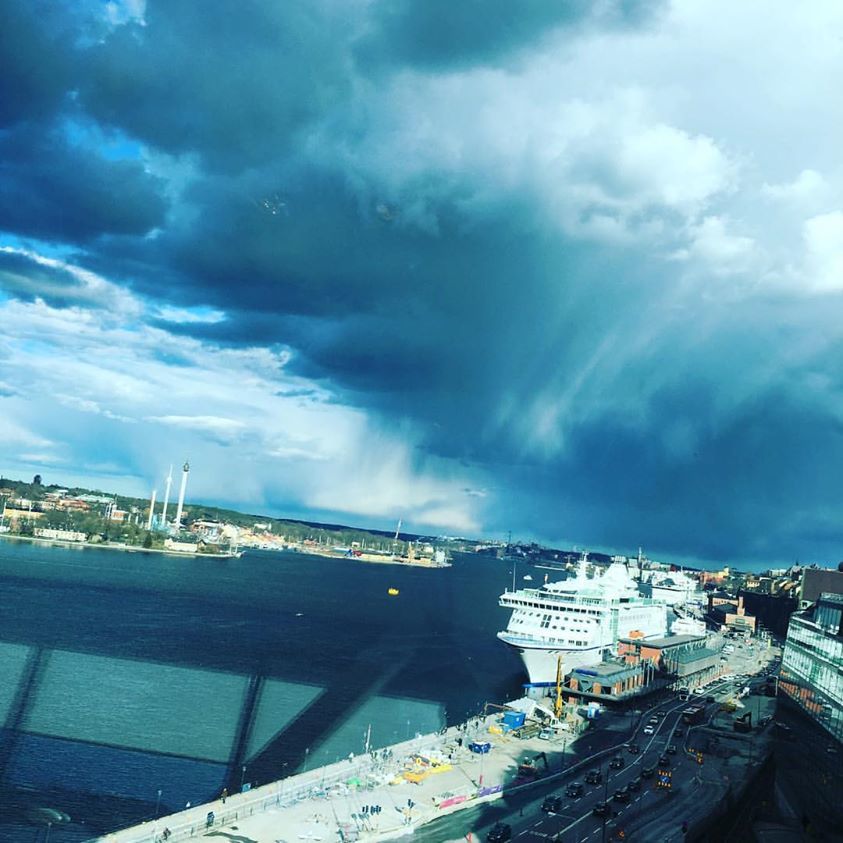 For lunch we stopped in at DaPepe Italian in Gamla Stan for some pizza that was well spoken of on Yelp. The pizza was good, not great. This part of old town seems to be the “Little Italy” as there are many Italian cafes around.

Finally we discovered Akkurat Pub adjacent to our hotel which boasted the largest whiskey selection in town. We had burgers and whiskey. The service was severely lacking and I had to chase down our order after 45 minutes of waiting. But it was a Friday night and lots of people were having pints.

One of the best fish restaurants, if not the very best, on the planet:

The Operabaren (Opera Bar) in the Stockholm Opera:

The Opera Bar offers the same high quality as the Main Dining Room, but focuses on traditional traditional Swedish cuisine.

“The Opera Bar, next to Café Opera, opened in 1905. Its interior is a mixture of Art Nouveau and an aristocratic gentlemen’s club. The Opera Bar has been and still is the meeting place for all kinds of people, a classic hangout for more than 100 years. Artists and intellectuals mix with business people who come to the Opera Bar for lunch, dinner, or perhaps just a beer and a chance to relish the cultural ambiance and enjoy the view over the Royal park Kungsträdgården.”

It serves classic Swedish food (husmankost) in most convivial settings. If I only had one meal in Stockholm I would go here.

I always have to have the petit smorgasar, but everything is good.

Duly noted for next time!

Erik’s Gondolen, a restaurant suspended above the water and providing spectacular views.

Erik Lallerstedt is a sort of minor celebrity chef in the Stockholm area who has been involved in a series of different restaurants going back to the 1980’s. His first, if I recall correctly, was on a boat on Nybrokajen. I know at one point in time he was also involved in Gerda’s Fisk in Ostermalm. He has a couple of places around Stockholm that he is presently running.

Lallerstedt is kind of famous for putting chili and other unusual (for Swedes) spices into rather traditional looking Swedish food. Things like roast chicken with feta and chili mayonaise, venison burgers with gremolata, blackened salmon, etc. For Swedes this is adventurous, but sometimes the combinations are not so successful.

While I am somewhat dubious about celebrity chefs, as I recall his food is usually not bad, although the portion size is kind of small.

The Gondola location is famous for the view, a little like Windows on the World used to be in NYC, and it’s probably worth it for that alone. As I recall there is a huge traffic rebuild going on in that area that has made it difficult to get to.

A list recommended by chefs or restaurateurs of Fulgurances.

Been Oaxen Slip, had a good meal. Also went to the sister restaurant of Gastrologik, Speceriet, it was very good, we could see some French influence.

I was just in Stockholm for a week. Many places were closed for holidays. I had to strike more than half of my list off on investigation, and more than half of what was left got struck off when I/we walked up and found a notice on the door (but none on their websites or social media).

We caught Speceriet before they closed, and that was a nice meal. Oaxen Slip was less successful for us. The menu was quite restricted and without getting a large expensive whole fish or slab of meat, it was difficult to put together a dinner. Service was also somewhat cool and sparse. We had a good prix fixe at Bar Nombre and good pizza at Babette, both close to where we were staying. On the lower end, I enjoyed the sausages at Ostermalms Korvspecialist and Lennart & Bror, and had excellent falafel at Falafelbaren.

Thanks for your recommendations.

Good to know Speceriet is still doing fine. As for Oaxen Slip, I remember some dishes required at least 4 persons, when we were there, somebody ordered a beautifully cooked rabbit. We had some pickled herring that was very good as starters.

Too bad with the closed restaurants. When was it? Paris restaurants vacation start around end of July to end of August.

We were there July 12-21. Their big Midsummer holiday was June 20, and things get quiet right after that, though some places close later. For at least a couple of the places I ate at, it was their last week open.

Good to know this.