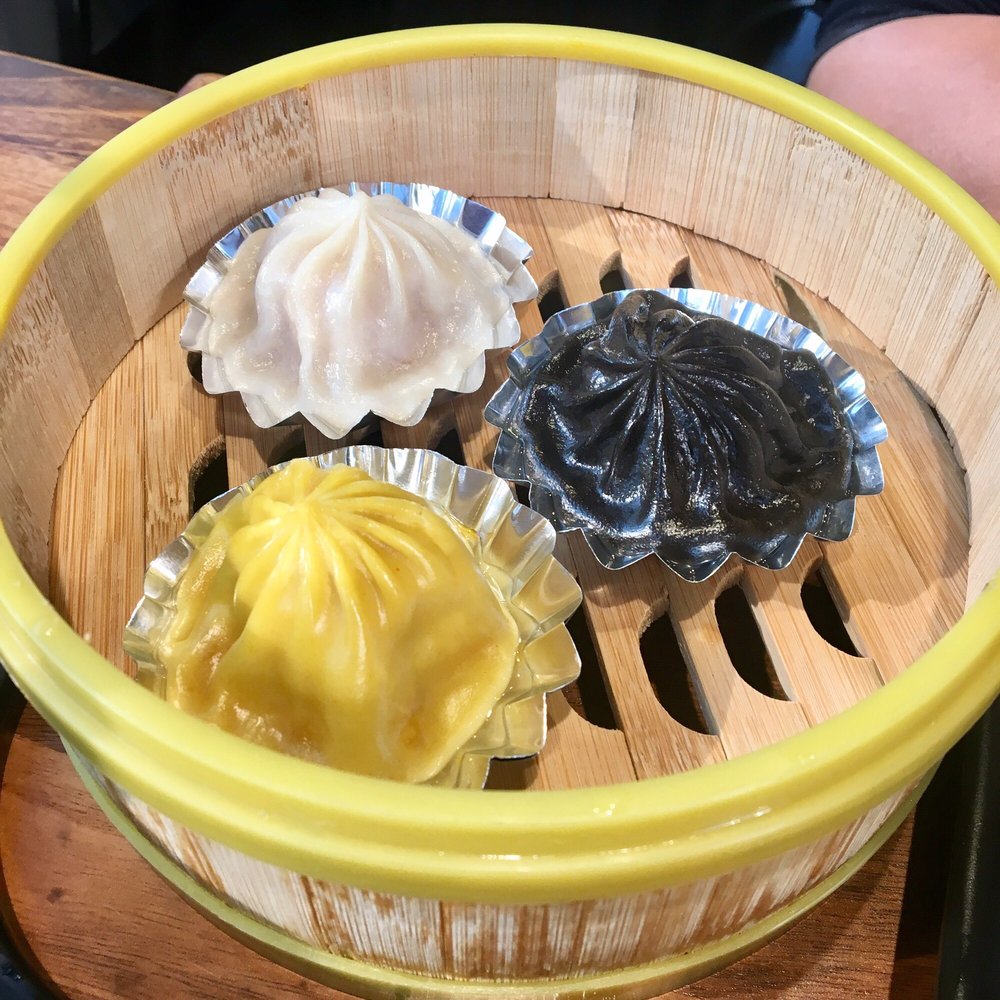 The triplet of xiao long bao (original, crab, and truffle) look like a dead ringer for Koi Palace’s, which suggests they share the same commercial kitchen and XLB machine that supplies the three Koi Palaces, MY China, Dragon Beaux, Koi Palace Express at SFO, and presumably the upcoming Palette Tea House in SF Ghiradelli Square.

Does anyone know more about this place? One of the owners according to ABC records has the same name as a Koi Palace employee, so short of an amazing coincidence, the businesses are related.

Sometime lurker, first time poster. Went to this place because of this thread. Yes, “same boss,” as one server said when I asked if they were related to Koi Palace. The menu is kind of all over the place, but pretty fun.

The Hainan chicken is very flavorful and moist; some parts close to the bone were not fully well done. The rice is just okay; needs more chicken fat. The rice plate comes with a baby spinach salad that doesn’t belong. The menu also has a crispy Hainan chicken; I think it is roasted, which doesn’t make it Hainan chicken to me, but it looked terrific on another table.

Salted egg yolk fries seems like a brilliant fusion idea considering the prevalence of salted egg yolk fried pumpkin/crab/etc dishes in Cantonese restaurants. Has there been other places that done it? The fries themselves are not standout fries, but it is a tasty dish. Typhoon Har Gow is deep fried, with bits of fried garlic and basil. Those little bits are delicious; the fried dumpling is not bad, but I’d rather have a traditional steamed version. Never had the different color XLB at Koi Palace; I was never too impressed with the standard XLB at Koi. These are similar. The yellow is supposed to be crab, and black to be black truffle; neither has much additional fragrance. I wouldn’t order them again.

The sticks portion of the menu seems pretty good. The chicken cartilage could have had more grilled flavor, but the pork belly was tender and delicious. It had a good amount of smokey flavor, so I wonder if it was bacon that was cooked then grilled. House corn on a stick was buttery good, smothered with some kind of mild cheese. My wife enjoyed her brown sugar milk with agar boba. I could see this being a hang out spot for those looking for these type of drinks, some grilled sticks, and the open til 11pm time.

It’s in the same plaza as the In-n-Out, which means you should avoid the Rollins St entrance into the parking lot to avoid the backed up line waiting for the drive through.

Oh they took over Encore Cafe if I recall. Right near the giant powerlines?

Interesting, might give this place a shot over the weekend.

Great report! I’ll probably stop by sometime in the next few weeks, so thanks for the lowdown.

Oh, and welcome to the community!

Great report! and welcome! I agree I found the XLB at Koi Palace rather underwhelming. Its like its there just to fill up the menu.

Finally ventured over here and wanted to give it a shot. Sat down early morning and noticed that the kitchen staff were wearing Koi Palace baseball caps so highly likely they are under the same owner. 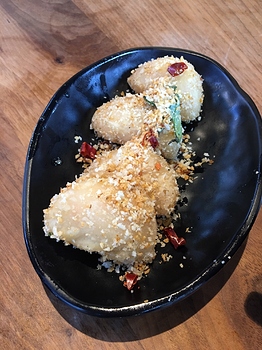 Started off our meal with the typhoon shelter ha gao. Tasted like the ones I had at Palette Tea House, but I find it on the okay side. I was expecting a spicier burst of flavor, but it was more on the crispy garlicy side. 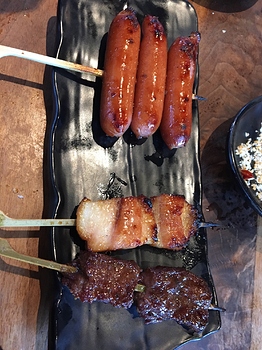 I was a little curious on the yakitori side of things, and opted to try the kurobuta sausage (had a nice snap on the exterior, and well reminded me of those little cocktail weiners), NY prime steak (sauce/marinade was similar to that of the black pepper sauce), and pork belly (relatively fatty piece with some nice chunks of meat). I liked these items well enough, though I still don’t think there’s that high of an emphasis on the yakitori side of things. 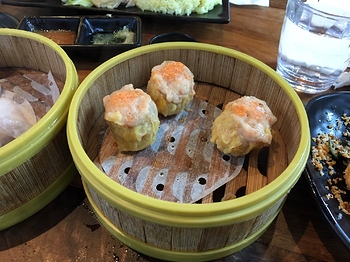 Grabbed a few dim sum items, starting off with siu mai. Pretty juicy in the middle, and overall gave a pretty good siu mai impression. I haven’t been to Koi Palace in a while, but I thought they still served four per basket rather than three. 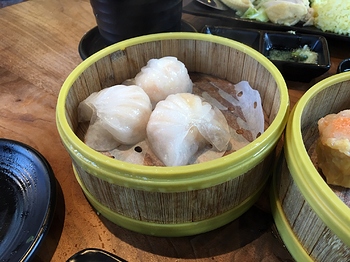 Next up were the regular ha gao and I thought they did an okay job. Still thought the wrapper was just a little on the thicker end. 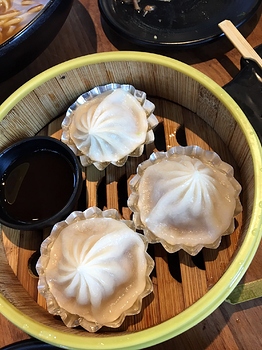 And lastly we got the standard XLBs. I still tend to like their version, though @sck and @Kirk_T beg to differ haha… The ones I had were fairly soupy on the inside with a savory taste. 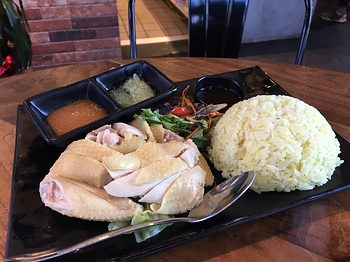 Next up was the Hainan chicken. I only tried a few bits of it, but the chicken was moist and had a good chicken flavor, but I thought the rice could have been just a little bit better, maybe more chicken stock or fat. 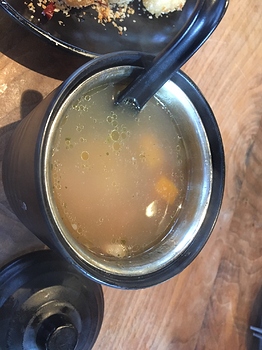 Opted to try the soup for an additional $2 and I thought it was a nice carrot, corn, pork rib type soup. Savory with a hint of sweetness from the carrots and corn. 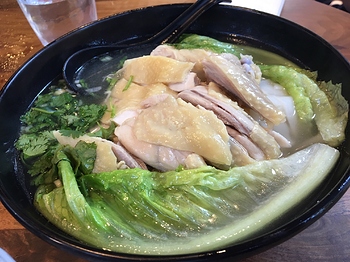 I opted for the Hainan chicken noodle soup and I found the chicken to be the same as the one served with Hainan chicken rice (go figure…). The broth is chicken based which is on the lighter end, but that’s not necessarily a bad thing. The noodles are the flat rice noodles (ho fun). 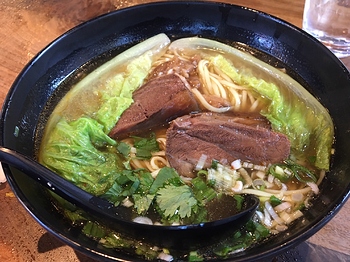 Lastly tried the beef noodle soup. There aren’t many pieces of beef but each piece was huge. It was quite tender and well seasoned. The soup was on the clearer, less oily with a splash of spice. I dunno, the soup wasn’t to my taste as I liked a more spicy beefy/soy based broth like the one at A & J in Cuppertino (I think they closed though). The noodles were thin egg noodles and seemed a little soft for my taste.

Overall I liked Stick and Steam though its on the pricier end. I think the meal was upwards towards $70 without tax/tips.