This is one of the many new restaurants that opened last year in Houston and one of many that I wanted to try. I gotta say, this place - the actual place - captivates me and when I tried the food, it was like icing on the cake.

I really like old Houston, I see movies at the River Oaks Theater just for the experience. I once officed in the Mellie Esperson Building and it was like stepping back in time each day. State of Grace is on Westheimer at River Oaks Blvd, just across the street from Lamar High School in the Lamar River Oaks Shopping Center. It anchors the 1948 shopping center in what was previously (I believe) a dry cleaner. Much ado went into the remodel and the interior is just delightful. I arrived for lunch with a friend on a day that to that moment had been less than perfect, and my mood matched. On a Monday, the dining room was booked but they offered us a spot in the oyster bar. My mood immediately shifted into high gear. The space has a dining room, a very long bar area and a separate oyster bar with both small tables and bar counter stools. The whole place is replete with white marble and shiny surfaces. The oyster bar is sunlit by the wall of windows facing the front. I’ve posted a picture of the oyster bar taken from the internet. We sat at the second table on the right. 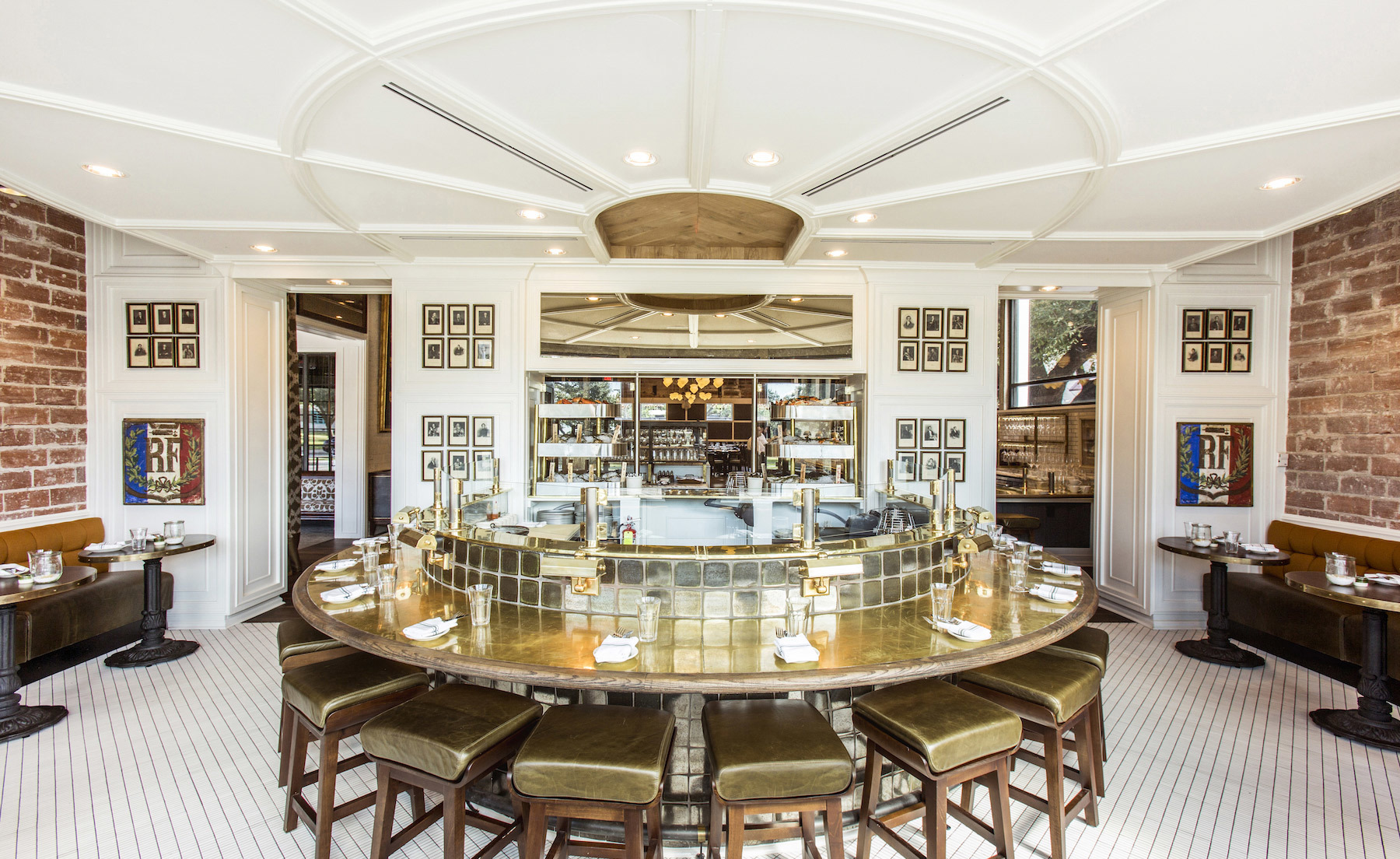 So the James Beard award nominated chef/owner is Ford Fry who is native to Houston but has made a name for himself in Atlanta. This is his first restaurant here and he pays tribute to his childhood by offering items Houstonians will recognize with fondness: “cheese enchilada a la Felix,” “Nod to Hofbrau Hanger Steak.”

We started with a shared Texas Blue Crab Fingers with Bird’s Eye Chili. At $8 I wasn’t expecting a lot, but it was plentiful, cold crab fingers topped with fragrant herbs and a spicy chili sauce, this dish was amazing.

I saw a Twice Fried Korean Chicken appetizer and crab fried rice side that I wanted to try so I was happy to find a lunch entree that combined the two. My friend had the “Sort of Waldorf Salad,” which she loved. The Korean chicken was mostly on the bone and it was finger lickin good. The crab fried rice was curried with lots of fresh crab, and addictive. The service was professional and prompt. And as I said, I am thrilled Mr. Fry remodeled this old center rather than opening in a warehouse with exposed pipes and cement floors as is the current trend. I can’t wait to go back to this place. Next time I’ll call ahead, it’s popular and rightfully so. 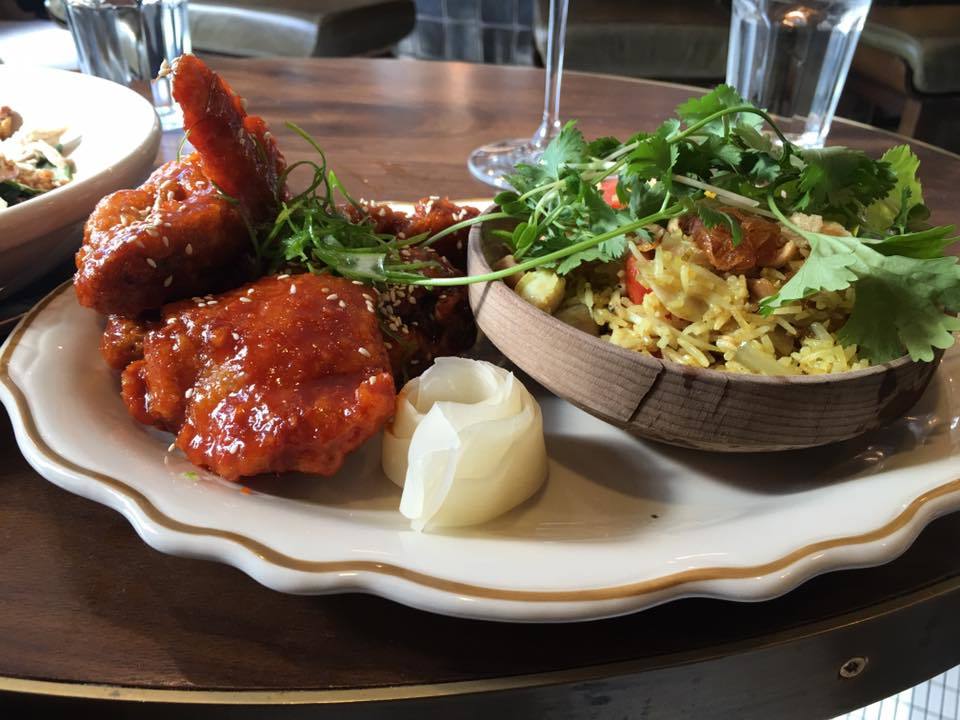 Aww, the dry cleaners is gone??? Just kidding. I haven’t even been down that street since the place opened and was wondering where it was. I used to go to Andre’s Patisserie in that center when I worked out on San Felipe outside the Loop. The room looks amazing. The place has gotten the kind of buzz reserved for places like Pass and Provisions, Uchi and Underbelly.

Haven’t even looked at the menu until now. Looks great, and not as expensive as I expected. Or maybe I should say, there are some reasonably priced options on the menu! I think I would have to try the Gulf Coast Tom Yum.

Andre’s made my wedding cake(s). Delicious. I would like to try that Tom Yum also. Not so much the nostalgic balogna sandwich. Our very close neighbors ordered the burger and the baloney sandwich. Both were pretty unwieldy. The thinly sliced baloney was piled up and folded over on a burger bun. My baloney sandwiches were curled up on white bread with mayo, back in the day.

So where is everyone? Hope all is well with folks.

I gotta say, this place - the actual place - captivates me and when I tried the food, it was like icing on the cake.

It’s been a long while since I’ve been here, but on my own one day I kept thinking about the enchilada from the el Felix recipe that they offer here, strangely under the “share” section. That could start a fight.

So I came, sat at the bar looking at the giant oak tree out the window, and ordered the enchilada. Feeling sheepish about that, I also ordered the kale caesar salad to go with it. It being of Spanish influence, it has Spanish chorizo and fried bread (croutons) mixed in it, with anchovies and manchega cheese on top.

You know what? I ate the salad and took the enchilada home. 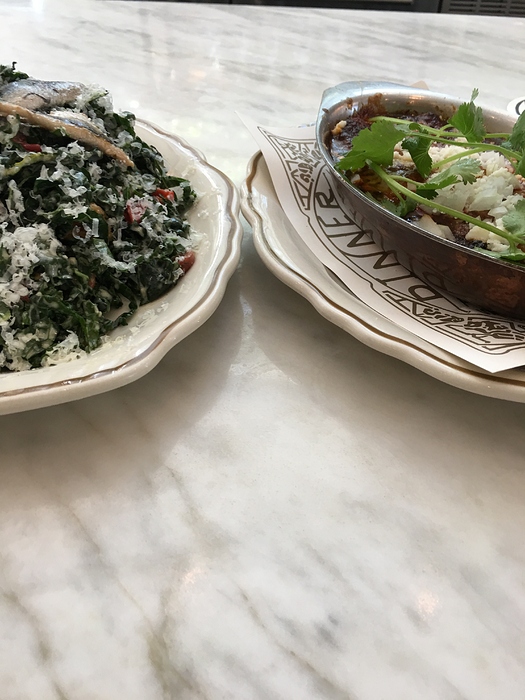 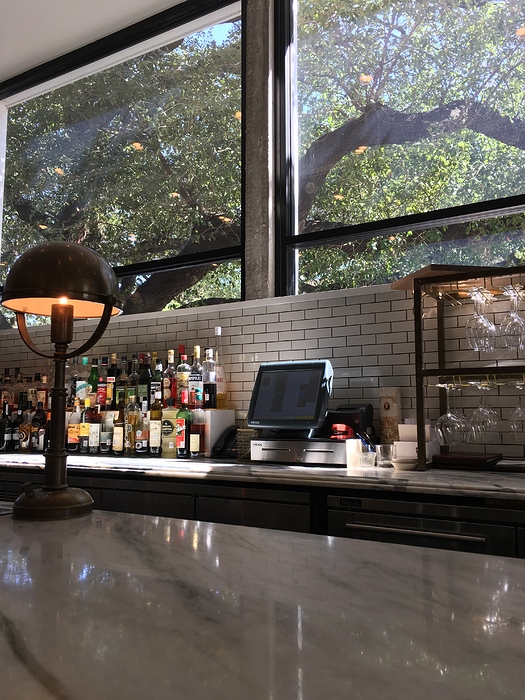 Fry is taking over the former Bernadine’s and Hunky Dory spaces for his Tex-Mex concept and a place that he ’ hopes the smaller, more casual restaurant will capture his fond memories of dining at the San Jacinto Inn as a kid. ’

I believe I can say I’m ready for both of these to open now. 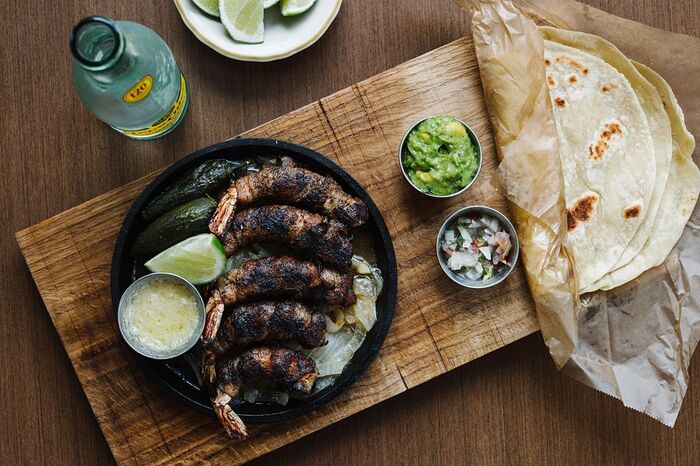 The Hunky Dory and Bernadine's locations will be reborn in early 2018.

Ohh yes! I meant to mention that. It’s why this enchilada was on my mind lately. 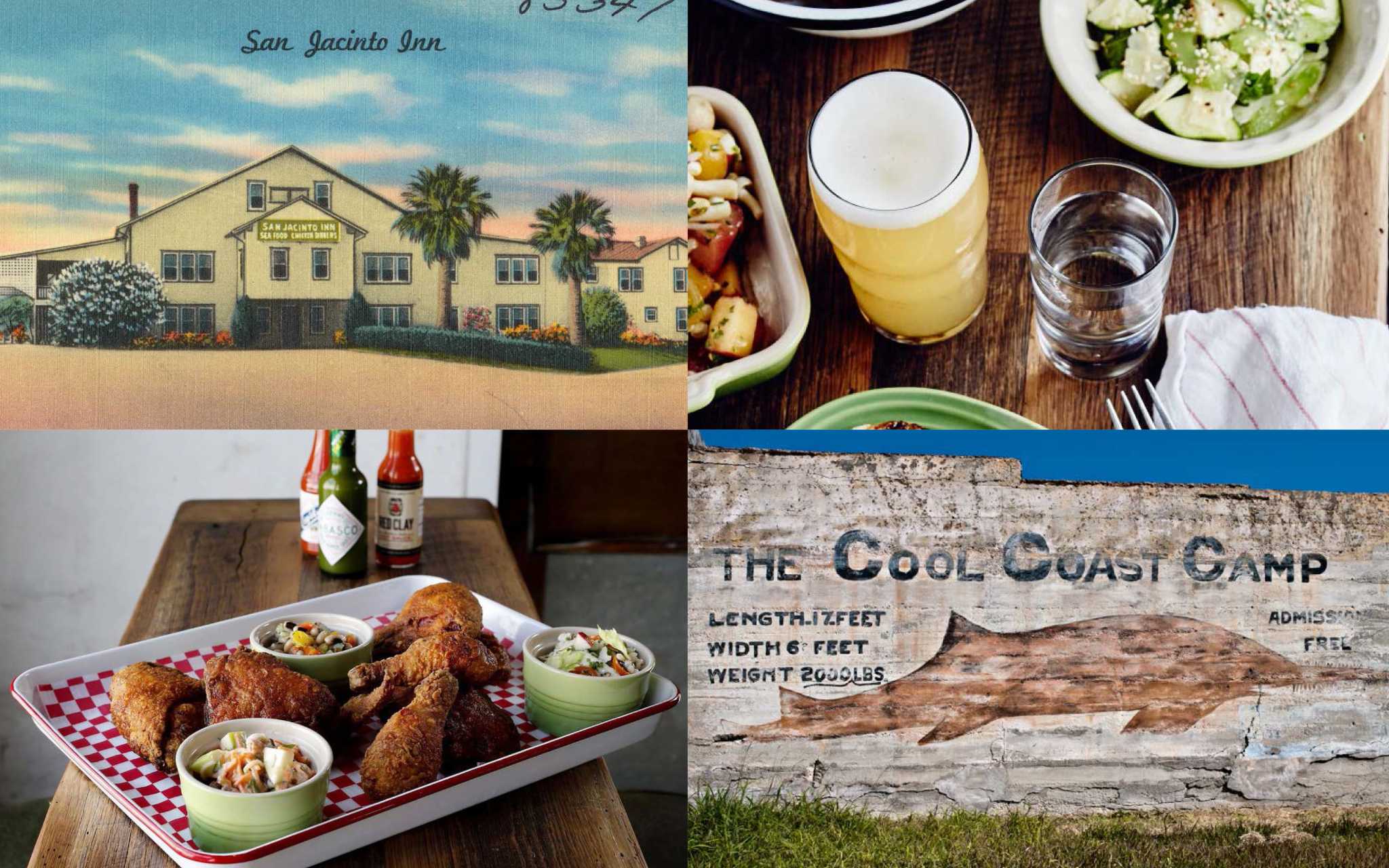 A nostalgic homage to the San Jacinto Inn will join Ford Fry’s Tex-Mex...

Okay - I’m ready already. I hope this guy is not over-promising on what he can deliver. I will be SOOOOO disappointed.

Monument Inn, just across and down the road from the old San Jacinto Inn does an all you can eat for 38 bucks, a bargain considering oyster prices these days. 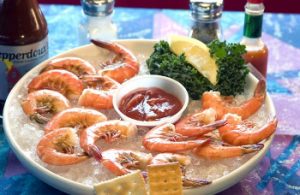 Monument Inn's menu offers a wide variety of seafood including fresh fish, fried seafood and seafood specialties. Plus all you can eat meals along with steak, chicken and pasta and a children's menu.

I wonder why it takes so long to open a restaurant. Hunky Dory was YEARS in the planning, more years than it actually operated. Now La Lucha “as soon as this summer?”

Hunky Dory was YEARS in the planning, more years than it actually operated.

Apparently permitting is a huge hassle. Some of the delay with Hunky Dory may have had to do with what was going on behind the scenes at Treadsack???

Both opening in August.

This is so fun, it’s like he has lived my life, haha. These restaurants should be amazing.

There’s a La Lucha preview this Thursday 4-6 in the oyster bar at State of Grace. I’m of a mind to try and go. The bar is pretty big, but not huge, so I don’t know whether its a wise choice. A “stand and nibble” is not a good fit for me. But I’m ready to try it out! 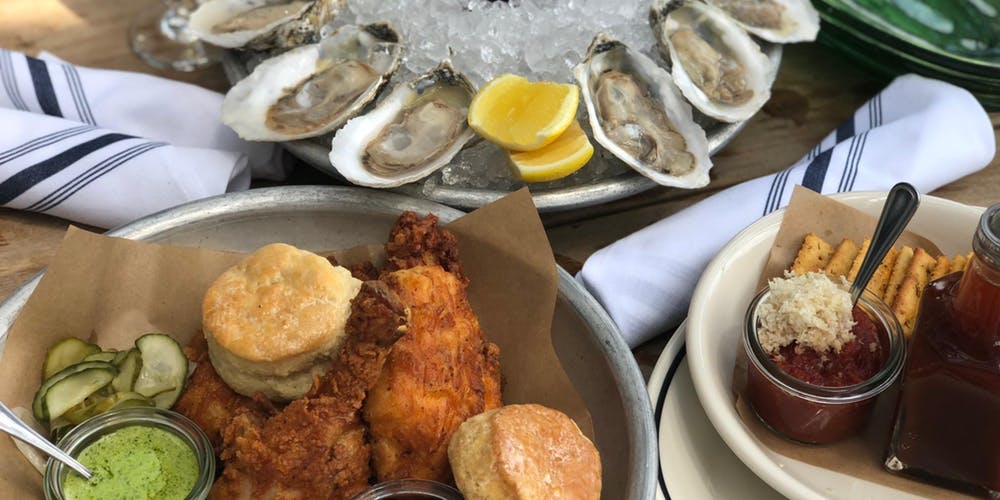 Taste of La Lucha at State of Grace

Join us in the Oyster Bar at State of Grace on August 2 from 4-6 p.m. for an exclusive taste of the new oysters & chicken menu, as an introduction to La Lucha opening soon in the Heights! Mix and mingle with Executive Chef Bobby Matos, General... 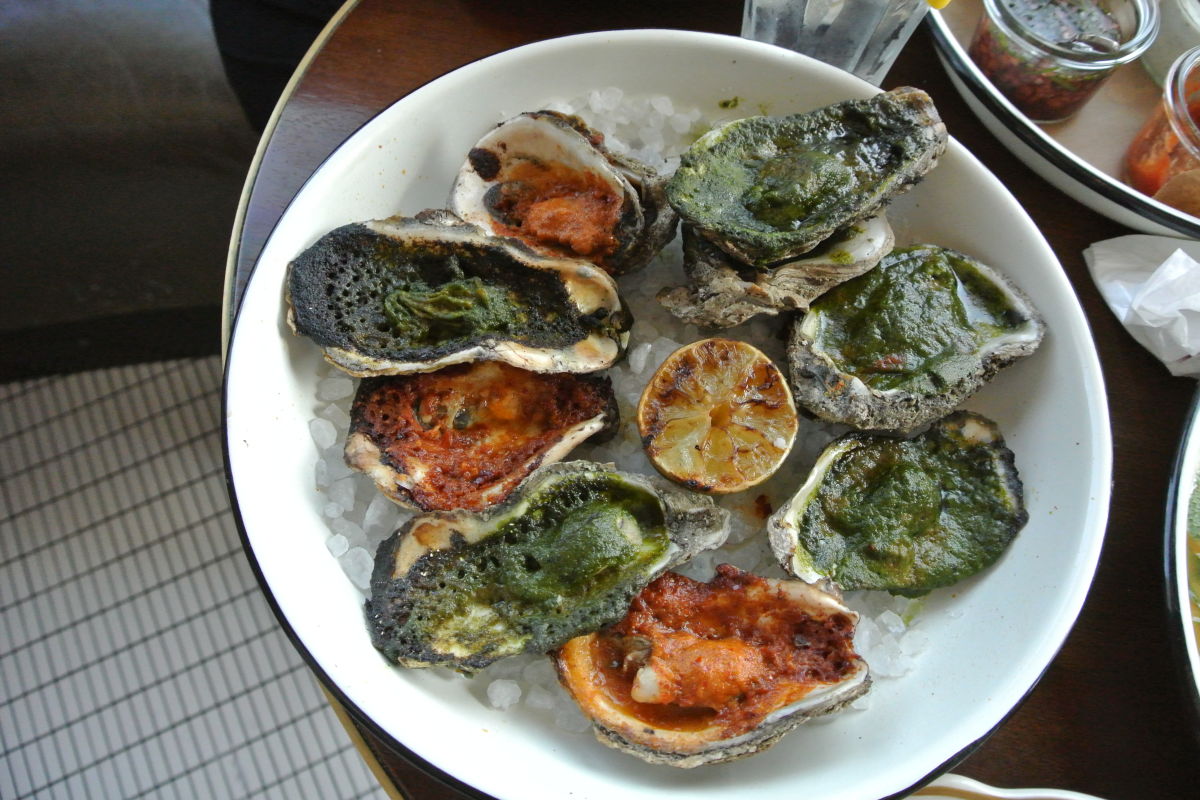 The Ford Fry and Bobby Matos collaboration came to life last week at State of Grace.

Did you make it?

Did you make it?

No I didn’t, looks interesting, especiall the colors on those oysters.

I don’t remember oysters that color. Or a soup like that

Why not? Sometimes, it is rather useful for their owners. The thing is that peple go to the restaurants to look at the place outside their houses. And it must be a great question for the owners of such establishments. My friend having his own cafe even looked for the useful helpers to make his one the best in the area.