I didn’t find an existing thread for State Bird Provisions. They have a Wikipedia page. Michelin star, multiple James Beard awards, etc. I made a same day reservation to State Bird Provisions on a Sunday. I’d been to State Bird a few times before, but not since the pandemic started. State Bird normally had a pushcart dim sum type of service where trays of small plates went around the dining room and were offered to tables. It was like dim sum except everything is inventive California cuisine with some Asian influences and costs more. During the pandemic they have switched to a more traditional a la carte menu. I think they should have switched to the dim sum model where there is a list of items with checkboxes next them to keep the dim sum theme going

. They currently have outdoor seating via parklets with propane powered heaters, and also some limited indoor seating.

Here’s the a la carte menu: 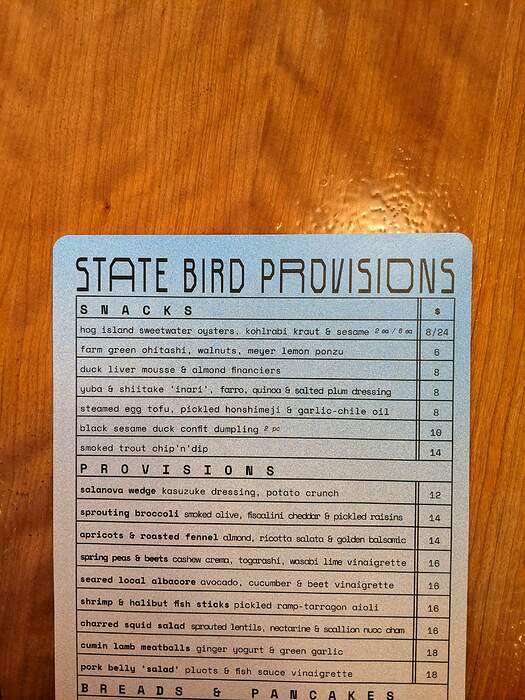 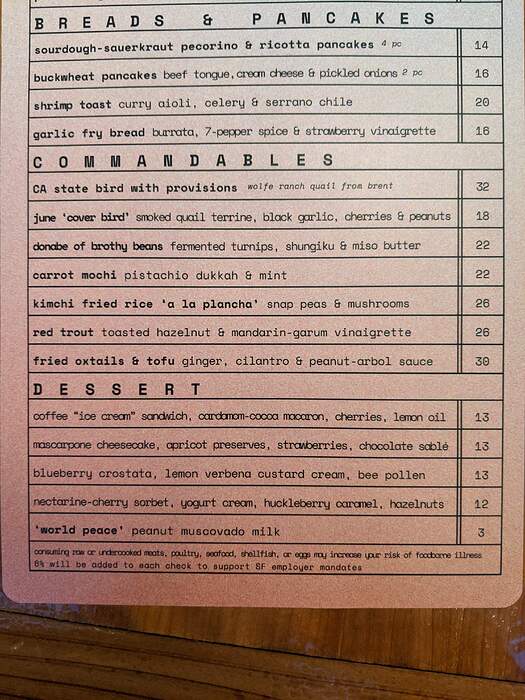 For dinner I had:

hog island sweetwater oysters, kohlrabi kraut & sesame ($8 for 2)
Not bad - Nice oysters. I think the kraut overpowered the oysters a bit though 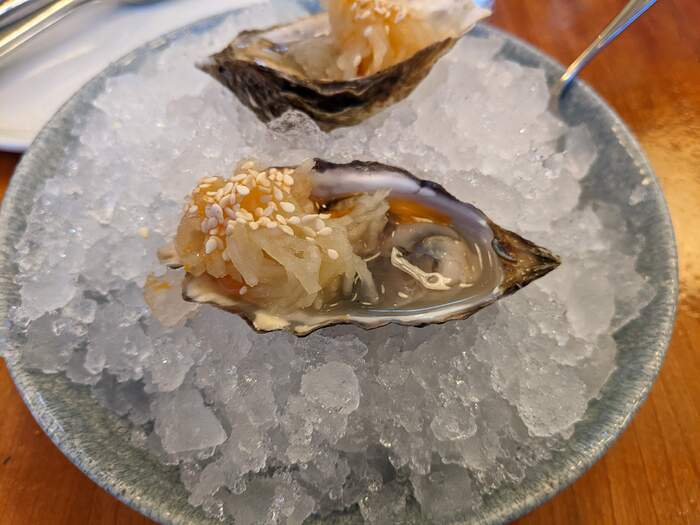 black sesame duck confit dumpling ($10)
These dumplings were quite good. Nice wrappers with a thickish salty-sweet-sour sauce that tasted like it had some Chinese influence - tasted some soy sauce and black vinegar maybe? in there. Filled with a tender juicy duck confit filling. Maybe not the best QPR at $5 a dumpling though they were tasty. 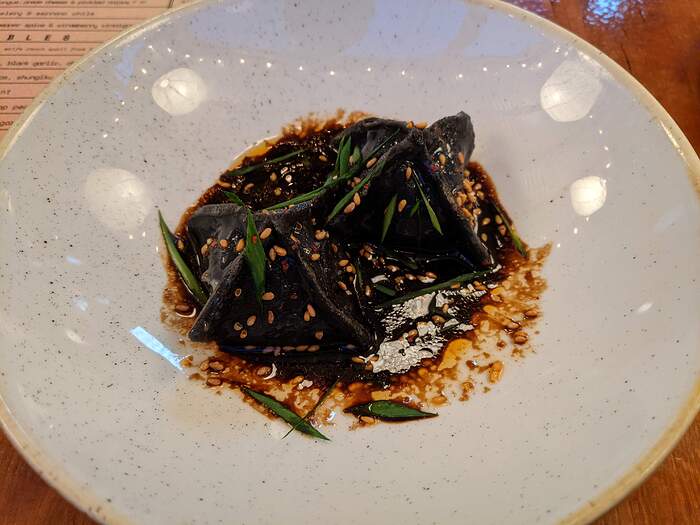 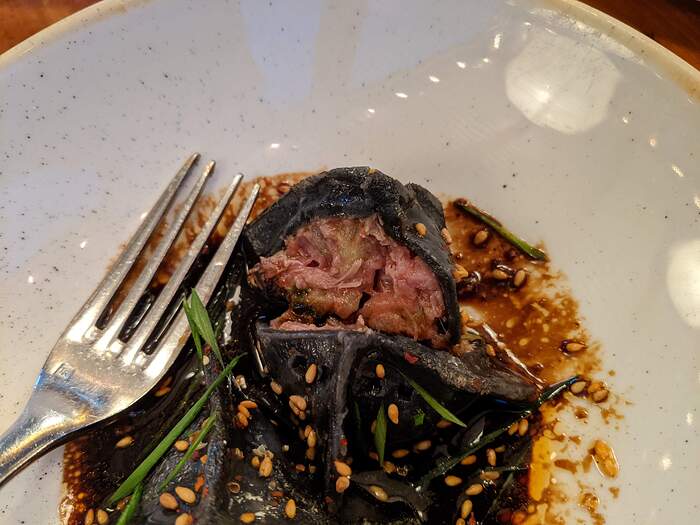 cumin lamb meatballs ($18)
ginger yogurt & green garlic
Very good meatballs. They were coated with something (including maybe some rice puffs?) and I think fried so the outside was nice and crispy, with a moist interior that had a lot of interesting spices. There was a little bit of yogurt on the bottom. 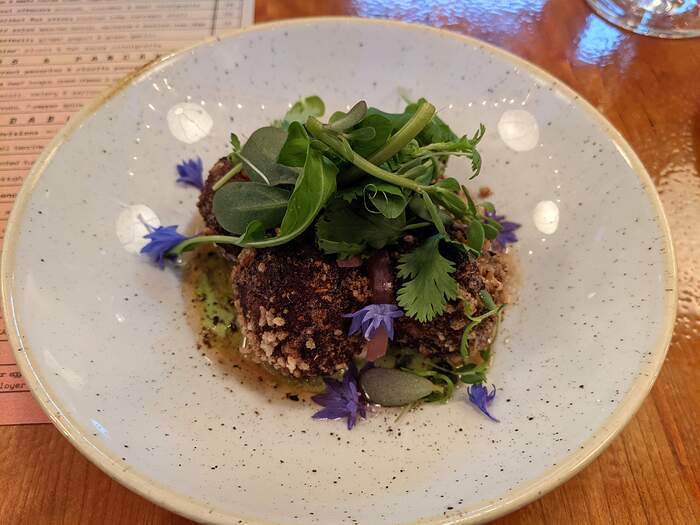 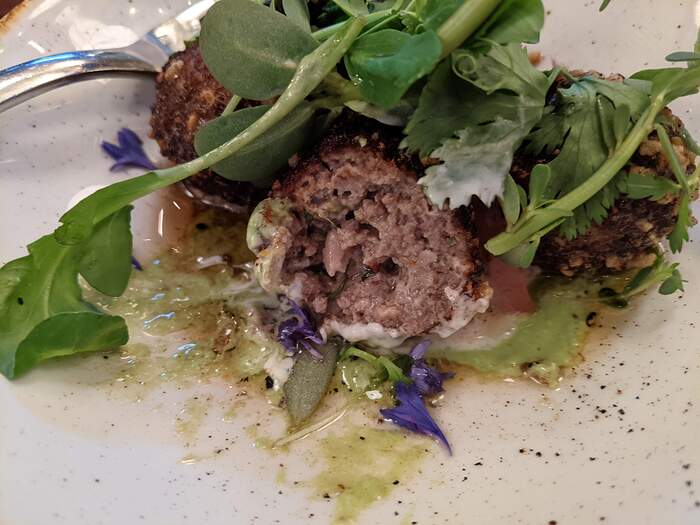 sourdough-sauerkraut pecorino & ricotta pancakes ($16 for a half portion)
These were also very good. Thick and fluffy pancakes with a nice sourdough tang, with a creamy ricotta filling. It came with some dehydrated sauerkraut on the side to dip in. This was one of the items that was available in a half portion which is nice for solo diners like myself. 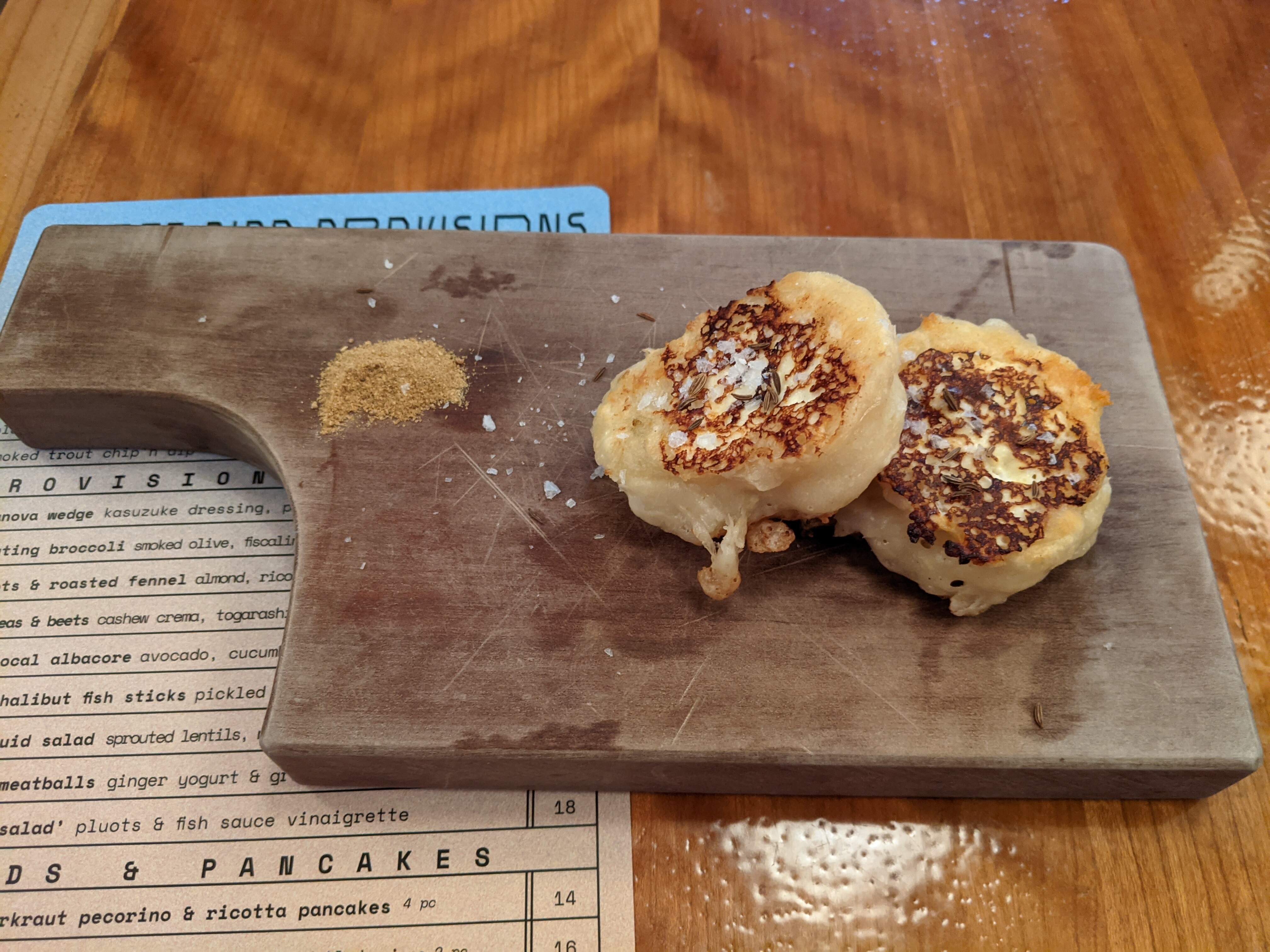 fried oxtails & tofu ($15 for a half portion)
ginger, cilantro & peanut-arbol sauce
This was pretty good, I had a half portion of this. Oxtails with a Southeast Asian touch. The peanut sauce was maybe like a satay dipping sauce, and the oxtails were cooked so that they were nice and tender with unctuous fat and connective tissue, but also with a crisped up exterior. The tofu was fried and was pretty good too. 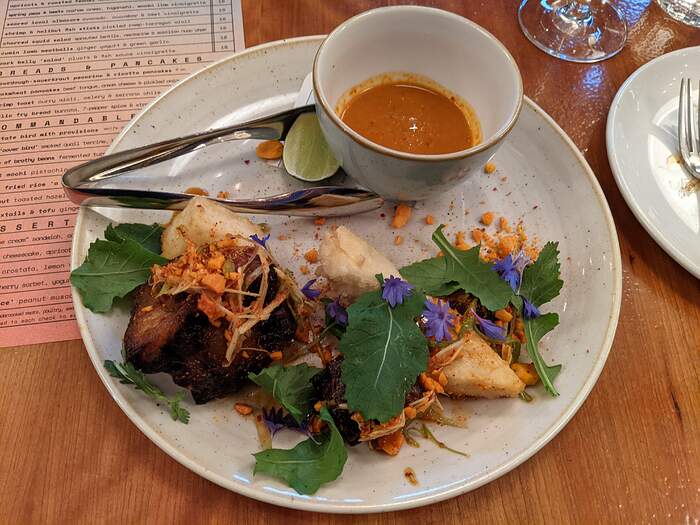 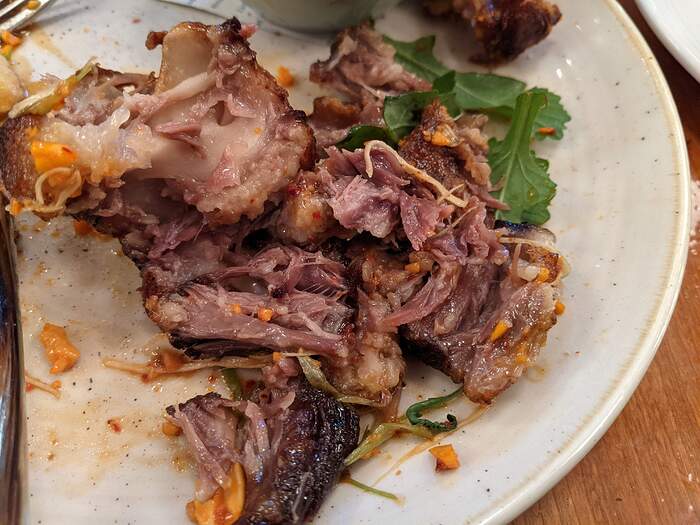 coffee “ice cream” sandwich ($6.50 for a half portion)
cardamom-cocoa macaron, cherries, lemon oil
For dessert I had a half portion of the ice cream sandwich, which was quite nice. The outside of the sandwich had the texture of the tops and bottoms of a chocolate macaron, and the interior was a coffee flavored ice cream. It came with two fresh cherries. The lemon oil drizzled on top added a bit of citrusy acidity. Delicious. 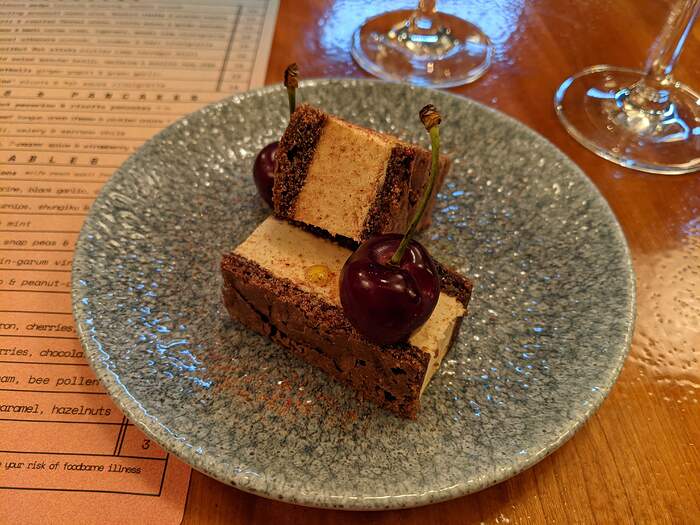 And finally a shot of ‘World Peace’ Muscovado Peanut Milk ($3) which tastes like slightly sweetened liquified peanuts with a bit of caramel flavor from the muscovado sugar. 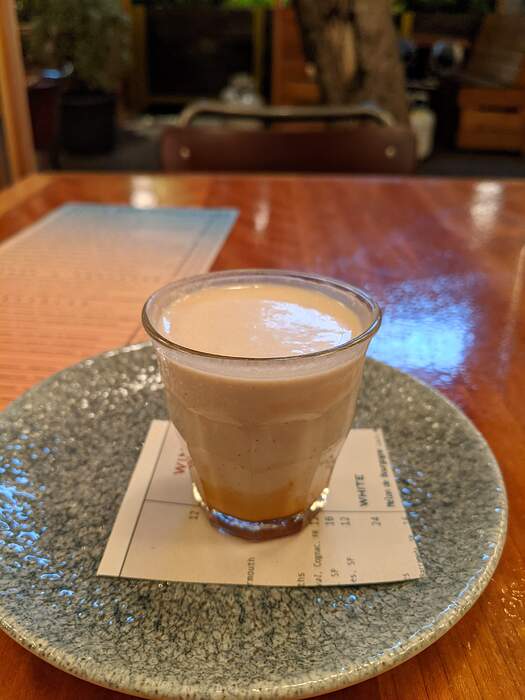 All in all a very good meal, and just about the right amount of food. Highlights were the meatballs, the sourdough pancakes, and the ice cream sandwich.

Interesting but I am not a fan of dim sum nor the style…at all. Give me a menu and I’d order the quail…obviously.

I like both dim sum and the pushcart style of serving, but actually I prefer the current a la carte ordering system at State Bird, though as I mentioned it would have been cool if they had menus like at some dim sum restaurants where you mark what you want. I’ve found that I often ordered too much in the beginning at State Bird and was too full when some more interesting stuff came around. It’s not as big a problem with traditional dim sum as one usually knows what one wants in that case and can pace oneself accordingly.

I used to eat dim sum every Sunday for years at the Mandarin Kitchen in Bloomington. The crowd to get in and the super tight table seating for the push carts just turned me against it. It’s a mad house. I think they are way over the fire code capacity but good for them for being popular. They have excellent Peking Duck and Eel San Bei 三杯做法. The eel is off the menu but will make it upon request… but not during dim sum hours.

So, have you had the quail at State Bird?

We’ve been, pre-distancing, and enjoyed it. I think one of us had the quail, but don’t have pictures nor recall details. We also like Yank Sing, so there’s that. Last year I shared this, although it may no longer be relevant.

So, have you had the quail at State Bird?

I have tried the quail before aka the “CA State Bird with Provisions” which I guess is the namesake of the restaurant, but it’s been awhile. I remember it being good though, basically a chicken fried quail. They had that in a half portion as well but I wanted to try the oxtails.

Found a recipe for the quail here too: https://www.sfchronicle.com/cooking/article/How-to-make-State-Bird-Provisons-signature-13135957.php

Having lived in Mill Valley I’ve spent a lot of time at the Marin Farmer’s Market (and the Civic Center). I miss Mt. Tam!

Found a recipe for the quail here too: https://www.sfchronicle.com/cooking/article/How-to-make-State-Bird-Provisons-signature-13135957.php

Thank you! How long have you been in the City? Are you old enough to remember Herb Cain?

About 7 years in the City, have lived in the Bay Area all my life… I do remember Herb Caen’s columns in the Chronicle from back in the day…

Thanks tons for the report! Food looks as good as ever although the “dim sum cart” thing was a great schtick, I hope it comes back.