Southern Table opened in the space where the old Pizza Hut used to be. It’s a cool space - I think I saw a menu posted on Open Table. Seems good but looks a bit too $$ for what it is.They have the same owners as Wood & Fire right down the street. Anyone been?

Thanks for posting this! I can’t find the menu-- do you have a link? Pleasantville is a short jaunt for us so I’ll probably check it out at some point

Anytime! I was wrong about the menu on Open Table. The restaurant’s website is still under construction too. Guess one of us will have to take one for the team soon!

I happened to be driving past the restaurant today so I stopped in to look at the menu. It was poorly lit and I didn’t see anything to take so I just took photos. Sorry they’re not better quality, and I don’t know why HO has rotated them. And yes, they do seem pricey.

I will say that on a zero to ten for friendliness, they get a zero. Granted they weren’t open for business (although the doors were open), but there were a bunch of employees sitting around eating and some in the kitchen and not one of them asked if I needed anything or even spoke to me. There were also some guys outside in the lot admiring their very expensive sports cars. At least one must have had something to do with the restaurant because he was wearing a Wood & Fire shirt and he didn’t talk to me, either. I should have just taken a menu and walked out to see if anyone stopped me. 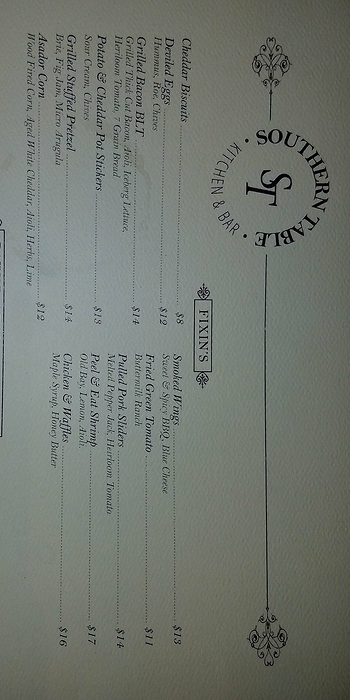 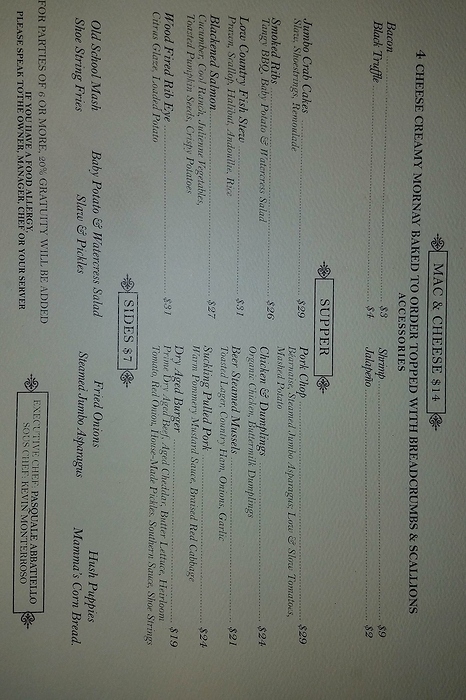 Well, that does not bode well for the place!

Thanks for posting Bill. We will probably go at some point because it’s pretty close to us. Yesterday we wanted to try Revenge BBQ in Irvington but at 4 they were almost sold out (!!!) so we ended up at Pik Nik in Tarrytown which was… Ok. I’ll post in a separate thread.

Thanks for checking it out. Wow - how cold and unfriendly - that’s the opposite of Southern hospitality, isn’t it? And the prices - yikes. $12 for deviled eggs?? You’ve got to be kidding me! Those babies can’t have that much caviar on them!

This looks/sounds like a restaurant that was in sono -Norwalk Ct. I’m pretty sure it closed. It was called Mama’s boy - southern table and refuge.

I remember Mama’s Boy - I think they changed the name and went under new ownership. I think it’s called ‘Beach House’ now. Haven’t been, but Mama’s Boy was a fun place to stop for a bite after a visit to the Maritime Aquarium.

Yes Greer Fredricks sold Mama’s Boy, which flourished under innovative Chef Scott Ostrander, to the people who run sibling restaurant Beach House in Old Greenwich. I liked MB, and him, but felt it was a bit too concepty for a CT crowd. Hope that isn’t the case with Southern Table, though Upper Westchester and Connecticut tastes are pretty much similar.

For Greer fans, she’s opened a new cafe around the corner, Jax, which caters to the breakfast and lunch crowd at the Aquarium and Sono offices. Good sandwiches.

Great to know. I’m a big Greer fan. When Mama’s Boy was open, they used to give out some of the restaurant’s recipes on these neat postcards. I still have two - one that makes a great mint julep, and the other a fantastic red velvet cake.

It only took 4 months but I finally got here yesterday for brunch. We would definitely go back.

The interior is really impressive-- though a bit generic in the loft-y, warehouse-y, industrial style that has become so ubiquitous. It’s huge and airy and attractive looking. It wasn’t crowded when we went but I could tell acoustics are a problem because I was having trouble hearing my dining mates despite the dining room only being a quarter full. So I’m not sure how it would be on a busy Saturday night.

Food was also great. As noted in previous posts the menu is a bit pricey but the portion sizes (except for one thing) are enormous. We started with the deviled eggs which included 6 pieces (3 egg halves) seasoned nicely. We also got the biscuits which were warm and flaky and buttery as hoped for. For entrees our friend got the dirty nasty which came with biscuits, fried chicken, and sausage gravy. I didn’t try it but she loved it and it was humongous. Another friend got the blueberry muffin french toast which I sampled and this was truly decadent. So buttery and rich with an over-the-top cream cheese mousse. This was the only modest size portion and we figured because of the richness they didn’t make the portion bigger. My husband had a pulled pork sandwich with a mountain of french fries, which he devoured, and I went for the avocado toast with poached eggs. They used hearty multigrain bread and I liked the surprising roasted carrots on top. I think I tasted some cilantro too. Huge portion I couldn’t finish. The sides are definitely intended to be shared as they are huge too-- the bacon was well done and crispy, there were like 20 hush puppies, and the collards were creamy and porky from the bacon.

Obviously no room for dessert and lots of leftovers. I’d definitely do brunch again.

Yes. I would definitely bring a crowd. That way you can share the huge portions and try multiple things on the menu. We were four yesterday and I wish we’d been six or eight!

So 3 half eggs cut in half (which would seem like an odd way to serve deviled eggs), or 3 full eggs halved?

Glad to hear you enjoyed it. One of the local food Instagrammers had a terrible experience there and to her credit, actually posted about it.

Sounds like brunch is the way to go. Thanks for the review & taking one for the HO team!

Glad you enjoyed it!

I’ve been back here several times since I last posted and have continued to be impressed. It’s best with a large group since portions are large and shareable. Brunch/lunch is very kid and baby friendly; dinner is loud and more chaotic. Standouts from our last meal were the fried green tomatoes, breakfast Mac and cheese, burger, and sweet potato waffle.

I was there for dinner the other night. Very friendly service. Very loud (as I’d feared, which is why it took me so long to get there). And very good food! The grits bowls (shrimp, mushroom) were excellent. And the fried chicken rated a thumbs up from someone who eats it in SC regularly. The large portions meant we had leftovers–yay! Looking forward to going back at a quieter time, if such a thing exists.

Still loving ST, which I believe got a nod from the Michelin guide as a Bib Gourmand. They do an amazing job with large groups-- we went yesterday with a group of 12 and had fantastic service, food, and drinks. Our food was taking a while to come out and they sent out two appetizers free of charge-- a breakfast flatbread with egg and bacon and a spicy pimento cheese dip. Their breakfast mac and cheese is rich and over the top with two perfectly fried eggs, loads of breadcrumbs, scallion and bacon. I ordered it “for my daughter” (aka so I could have some haha) and I got the grits benedict with creamy cheesy grits, poached eggs, andouille sausage, and hollandaise. Their brunch burger is so juicy and comes with heavily seasoned fries. Their bacon and biscuits are perfection. For some reason (I guess because we are huge gluttons) we also ordered dessert, which I barely remember because I was in a food coma by that point. We have yet to be disappointed at ST!