Some vanilla beans are coming up

This year everything is below what we can call a “good crop.” For example, last year both magosteen trees were full of fruit. This year one tree has only one fruit. A single fruit! I guess the giant squirrels will be highly disappointed. 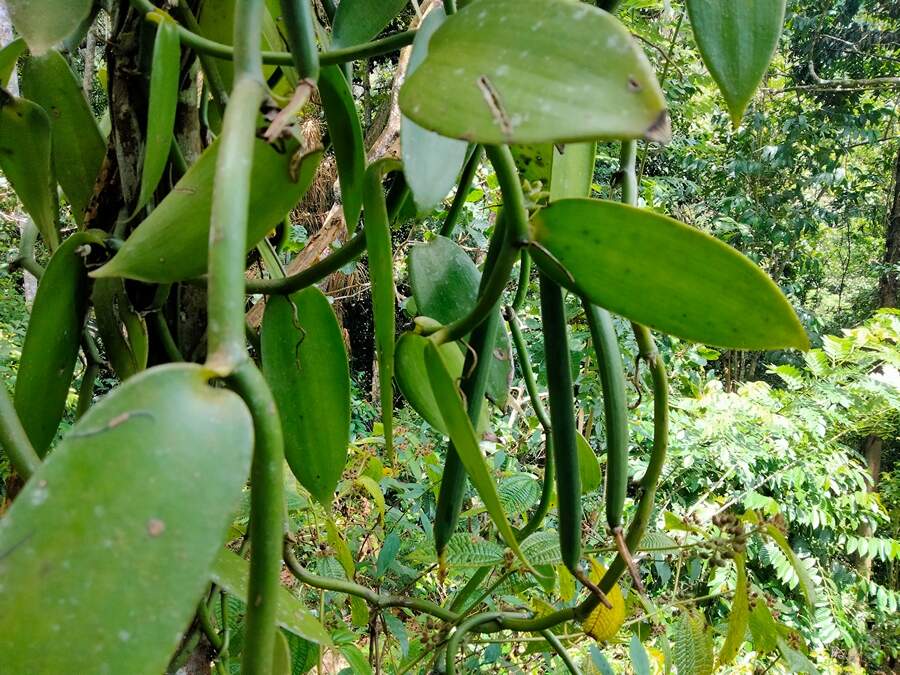 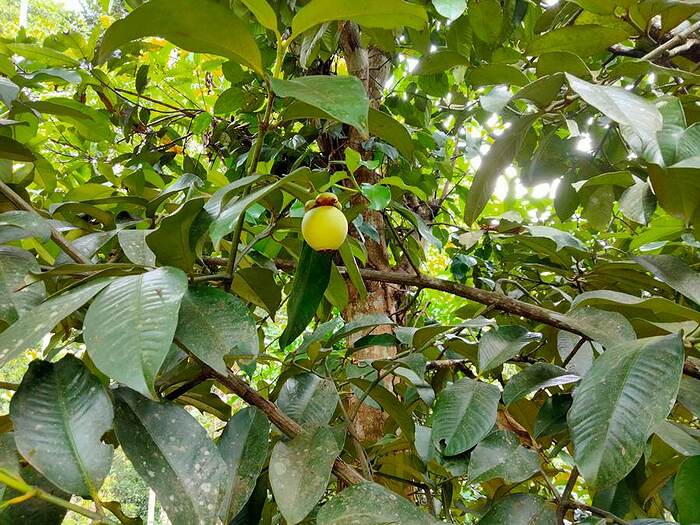 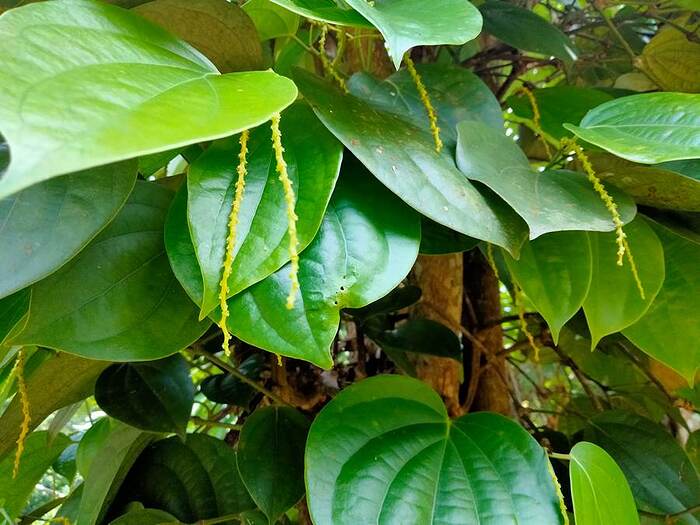 If i could grow mangosteen in my yard, that would be all my yard would grow. I love mangosteen! My favorite fruit.

I would grow saffron, if I could. And litchis.

You can grow it easily as it doesn’t need too much care. It needs some shade, and the ground covered in any kind of fallen leaves is ideal. And some moisture. That’s all it needs.

Saffron is hard to find I guess. And if you can grow it then it’s like a diamond mine

Not hard to find, but expensive!

Wow, impressive- you must live in a tropical climate. I dream of growing things like that, even knowing that the humidity would kill me dead in about a week. I’m especially blown away that you can grow vanilla orchids successfully.

How do you cure/ferment the vanilla pods so they develop the characteristic flavor? I tried, unsuccessfully, to cure Vanilla pompona pods grown here, in a greenhouse. They did not get a good, final flavor.

I hear Mangosteens are very slow to produce.

I had over 200 Saffron crocus bulbs/plants growing here at one point. They are easy to grow in most of the USA and inexpensive as bulbs. However, tunneling rodents, Voles, found them under the snow and devoured them. Only a few plants escaped.

@ewsflash I’m from Sri Lanka. Much of the low country is burning hot but my area is around 25-27c on average. Dec - January it goes down to around 15 - 22c but that’s all. That’s a really good climate for vanilla. But you will like it in Nuwara Eliya where the average temp would be around 15c on average and somewhere around 9c in Dec - January.

@bogman we don’t cure vanilla. It’s a really time consuming task that needs precision. We sell it to bulk buyers who also do the curing. It should be sold the same day it’s harvested, or it won’t be cured to the proper quality.
Curing starts with “killing” a process in which you dip the vanilla precisely between 1 - 3 minutes in hot water, depending on how hot the water is.
Then follows Sweating, Drying, and Conditioning.
To be honest, we never actually use vanilla, except for whatever “vanilla flavoured” comes from shops(but that’s just artificial flavours, lol).
But we put a vanilla bean in the tea leaves bottle, so the tea would get vanilla flavour. That’s all.

Having read this, I’m not surprised you don’t cure it yourself!

There will be black pepper I hope

Any specific kind of black pepper that you are growing? Does tellicherry grow in Sri Lanka?

@ewsflash the whole process takes 3- 6 months. It should be put under shade but in sunny weather and then wrapped each of them in clothes, and kept in dark boxes every night, etc are some of the labours that make it very hard to do. But it adds value. A kg of fresh vanilla is sold for around 30USD by the farmer. And after curing, it’s sold for 200-400 USD. So you can get an idea how much value is added

@sck Sri Lankans have developed their own varieties. Those varieties are named after ancient warriors of Sri Lanka, like Dingi Rala, etc., so I’m not sure what kind of main variety they are from. But I’m sure we have almost every variety that’s found elsewhere in the world.

Here’s an example of what the Sri Lankan agricultural researchers do. This is a publication by the department of agriculture.
A list of some (mainly) vegetable varieties 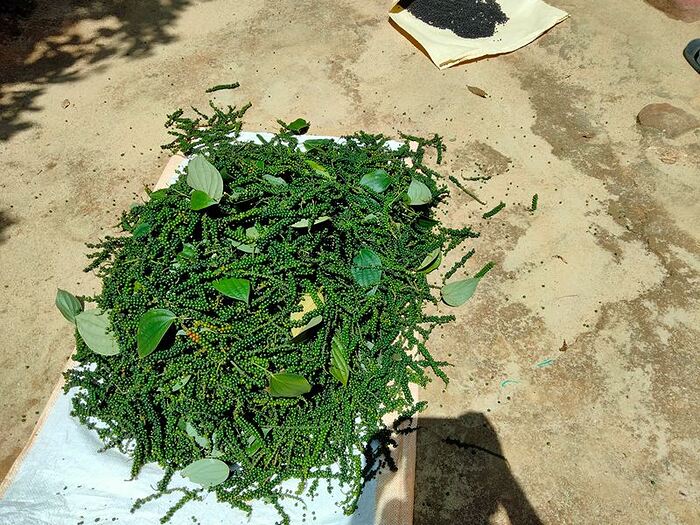 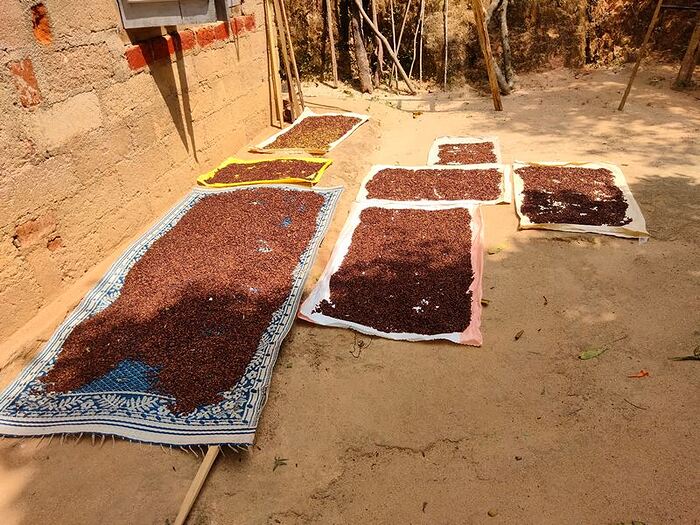 Those are impressive harvests! Do you sell them directly or to a cooperative?

Thank you for the interesting link regarding Sri Lankan agriculture! I downloaded it for further study. The Aroids and Cassava are of particular interest.

I tried selling them abroad. Contacted one seller I got to know from here too, he replied once and that was all.
The funny thing is, I can sell a kg(approx 2 lb) of cloves for 12USD and still no one is willing to buy. They buy a kg for 25USD from brokers. I grow it but I can’t sell it without going through brokers, lol. And those brokers buy from us for 5 USD and sell for 25.
Same story about black pepper.

Elephant yam is not grown here to the best of my knowledge. But many kinds of wild yams are available.
There are also some grown varieties too. One of my favourites is “kukulala” (Dioscorea esculenta).
Another one I like is “gahala ala” ( Colocasia esculenta). It has several varieties and I like the more softer milder one, cooked into a curry with coconut milk and spices. It’s available in many parts of the country.

Does the Colocasia have raphides which need cooking out? Raphides are tiny crystals of Calcium Oxalate Monohydrate, found in most Aroids. They cause a terrible stinging sensation, but there are often treatments or cooking methods to destroy the crystals. Also, there are plant selections which have fewer of these. I’ve experienced raphides in a local Aroid which I did not prepare properly. It was like biting into a hornet’s nest!

There’s one type extremely so, and people don’t eat it. And another one a little bit so but proper cooking makes it a tasty dish. Then the mild one which is smaller in size, and a little bit slimy if you pull it out very young.

Colocasia grew wild behind my grandparents’ home, and the leaves were used for various dishes.

Only certain people knew how to pick the right leaves, or what to do when the wrong ones were picked - ie the ones with the oxalates. The obvious giveaway was that they’d cause itchy fingers first. Ones that didn’t caused an itchy mouth or throat when you bit into the prepared dish - and you stopped eating!

Called Suran in some parts of India - I love it, but have never found it fresh here in the US, even at Indian / Asian / Hispanic markets that usually have a lot of similar produce.

@bogman similar and also delicious is Kand / Ratalu / Indian purple yam - nothing like the sweet Japanese purple yams, though. More similar in (cooked) texture to taro, actually. Available fresh at Indian stores, but it must be a slightly different variety as these are much smaller tubers than the ones I remember.