Sarahina Horii, I’m not sure what to make of it right now.

I’m part of the group that still mourns the loss of Honmura An. We found some respite when Matsugen opened. But it could never fill the void that was left by closing of HA. But as we didn’t have an alternative, we went to Matsugen often. I recall they had a fabulous sake list and that is where a somm turned me onto nigori. Then Matsugen closed. I cursed JGV for not having renewed the lease.

So when I found out that Sarashina Horii was opening a NY branch, I quickly made a reservation. Walking up Park Avenue one fine summer evening, its was as though a party had spilled out into all the streets. Even though I was outside, the buzz on the street made me feel like I was practically in a club. I turned the corner and all the sudden realized that our destination was across the street from Gramercy Tavern. My dear wife says that’s a place we need to get back to.

Walking inside, its calm and quiet. Serene away from the cacophony on the street. On the right is a large bar with bottles of sake arrayed in colors lining the walls. On the left across from the bar are some table that are set up under a series of wood slats that make the space intimate. We are seated there.

Perusing the menu, there’s the typical choice of hot or cold soba. Unlike at most places there are two styles of soba offered. The pale version which is almost white from the buckwheat being highly polished to a darker more robust noodle. I also see that you can order a standard serving size or a large.

I order the pale noddles cold with the dipping sauce and shrimp tempura. My wife orders kamo nanban (her default choice) with the darker noodle. We choose butter clams and fish cakes as appetizers. The start of the meal is very auspicious. The serve comes out and places a small bowl in front of each of us. Then she places this tiny white disk in the bowl. She pours in cool water and the disk swells into a small cool cloth to wash away grime from your hands. A fun parlor trick.

The starters come. The fish cakes are cold, sprinkled with fresh wasabi and very refreshing in an austere way. They’re followed by the clams which are rich in that buttery way you would expect from the name. My wife and I had to share using the large wooden spoon to scoop up the last bit of the broth.

Then we had a wait. And waited again. Then finally my cold soba is placed in front of me. The server said she would bring the other dish soon. Another wait. At least my food wasn’t getting cold. My wife tells me to start. I choose to wait. After what seemed like 5-10 minutes her soba arrives. It smells marvelous. The broth is intensely dark and ducky. I pour some of the sauce from the little pitcher into a bowl. Mix in some wasabi, green onions and grated daikon. I pick up some noodles and dip and bring the bowl to my mouth and slurp. I pause. The sauce is quite good. The fresh wasabi provides the right amount of excitement. But the noodles are wan. They seem over cooked. My wife has started her dish and she asks me if the noodles seem a little short, as if someone cut them up. I sample her dish. The broth tastes as good as it smells but her noodles are lacking too. And short. The shrimp tempura on the other hand are very good.

So the odd thing about our meal is that the weakest link was the noodles. At a noodle place. I’m hoping this is due to it being just open and that things get better. Its not that this was a bad meal. Not by any means. But we were comparing it to the places that had been before and at this point, it doesn’t measure up.

Oh, by the way the rest of the dining room is odd. Its a massive space with huge ceilings and some architectural elements hanging from above. But the space feels a little too clinical. Not that warm vibe Honmura An gave off or the cool city chic that Matsugen had. I’m glad we got our table. Much warmer there.

We will go again and hope it gets stronger.

Maybe you are already a New Yorker reader. But in case you’re not… https://www.newyorker.com/magazine/2021/10/11/a-different-kind-of-soba-at-sarashina-horii

The review in the print version spends more time on an abbreviated history of soba in NYC and on the back story of the family behind behind the soba. A rather superficial review of the (glitzy) restaurant in my view.

Hmmm. Not a stellar review from what I read. More history as you wrote than writing about the food. Have not been back since our first visit. Will try and revisit in the next few weeks. But there are so many new places that have opened that I want to also try. Going to the new version of Gage & Tollner next week and have Saga lined up after that. Amazing number of places to try despite COVID.

Yes a personal memoir of J food in NYC of sorts, but only of 4 places. JGV’s Matsugen closing did start a small wave of Soba places in the city, such as Soba-Ko and Soba-Ya, in the late 2000’s and 2010’s but there is a much much older restaurant that does Soba in a way that no one celebrates everyone should. It also happens to be the oldest Japanese extant in the city. Prime Minister Ikeda, the first to visit NYC, had food ordered to his hotel in fact, from Nippon on 52nd Street. Don’t ask me how I know, I just do.

So I happened to be friendly with one of the managers of Nippon and the former Nippon West sister restaurant. You’ll never hear reviews on food sites because it’s just be sitting there for decades, since 1963. Today’s food hipsters would find it very staid, despite the dozens of awards, year after consecutive year from the 1970’s and 1980’s, Village Voice, NYT, etc, hanging on the wall by the waiting area. It’s neither ultra authentic nor out of touch. It’s a living museum of Japanese food in NYC, kinda in a way Tomoe Sushi was/is/was a demarcation of Japanese-American sushi. (It recently changed names.)

Very quietly Nippon has been doing the highest quality Soba in a shall we say, rustic manner, 180 degrees the opposite of Sarashina Horii. It’s rough and thick, with chunks of unprocessed buckwheat groats dotting the surface. Is it worse or better? Neither. It certainly is better for your pre-diabetic conditions. You also taste more buckwheat and so there is less need to upscale the protein to say, lobster.

While Soba-ya and other made a spectacle of having a poor prep guy cutting noodles on display in the dining room, making them from bags of buckwheat flour, Nippon literally owns a farm in Canada, ships the buckwheat whole to NYC, and mills it in-house at the restaurant. Almost no one knows this. I only know because I asked what the huge mural painting depicting a field was to the manager. He replied “Oh! That is the owner’s buckwheat farm in Canada.” He described the process very nonchalantly, as if it was no big deal. But I was stunned! He then invited me over to Nippon West the following week to try it there and it was a treat. I was surprised at the course nature of it, but I then understood it was to respect the buckwheat, not to grind it to death so you can kill the groats off completely topping it off with $200 truffles while your pancreas is going why the hell are you giving me all these carbs in 15 seconds I can’t pump out enough insulin to deal with this arrghhh!! I mean do you want to taste buckwheat or caviar? It’s a choice, not saying one is better than the other. Then again, “tender duck breast, meaty mushrooms, lightly battered lobster tempura, glazed grilled eel.”, that’s very nice! Jacques Pepin would say, “But it’s not a question of nice, it’s a question of GOOD.” All this intel is from 2010 or so, Nippon West is gone, and things might have changed. But check it out and LMK. I might head in myself to update myself.

The manager also told me it was Andy Warhol’s favorite restaurant and had plenty of photos of him to back it up. Would you like to see one? I should really make you guys pay for that one! I wish it was livelier here like back in CH days, I need a job as a food writer or something ha!

I went there a few times - nice place. You must be sad that it closed.

Err, you have not revealed many secrets. Most of what you wrote was part of Pete Wells review from 4 years ago. 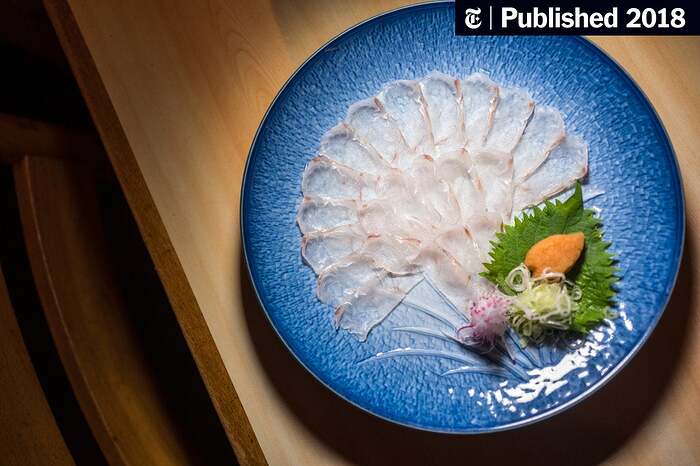 Since 1963, Restaurant Nippon in Midtown has used its décor and its cooking to make a case for the Japanese way.

I knew all this many years before Mr. Wells did and know much more about the restaurant than he does. And that’s that.

I didn’t understand. Is this a place that we should go to, if we ever get to NYC again?

What do you mean, no one knew about the farm in Canada? I worked down the block, and for years, soba Nippon mentioned it on their menu. Don’t know about restaurant Nippon, since that was farther east. We usually got takeout but when we dined in I’m pretty sure it was the inside cover of the menu, at least since I started going in 2010.

Soba Nippon is closed, so you can’t, and I’m not sure what the purpose was of posting about it in a thread about an entirely different restaurant.

I was asking about Sarashina Horii.

Oh, okay. But the guy you’re asking doesn’t mention Sarashina Horii at all.

Soba Nippon, yes it is closed but Nippon down the street, the original, still exists. Here is a bio of their founder, Mr. Nobuyoshi Kuraoka

Restaurant Nippon has been dishing out Edo-style Japanese cuisine in NYC since 1963. From full-course kaiseki menus to genuine hand-cut soba, and the inventing the now widely-popular Beef Negimayaki. Whether you join us at the restaurant or dine at...

I dined mostly at Nippon (original) in the 2000’s so I was introduced to Soba Nippon and their rather serious farm to table process of Soba via Nippon’s manager, as I mentioned. He then invited me to Soba Nippon.

Sarashina Horii and Nippon’s style of Soba are extreme opposites, is what I’m saying. It’s like comparing the highest quality most polished down rice type of sake versus Nigiri. Nigiri is associated as inexpensive but sometimes it is high quality and flavorful. Sometimes it’s what you want. Once I had a $600 bottle of sake, it was polished to 85% or something insane like that. It tasted like water. I didn’t quite know what to say about it.

Party at Nippon! Soba time! Everyone is invited except Honkhonk!