I’ve noted this before online, (both on ShaggyTexas and Chowhound), that both my mom and my dad are from Lexington. I’m related to half the people in the little cemetery just south of town.

When I was a kid, Ms. Tootsie used to serve up bbq from the meat market that sat on one corner of the square in the middle of town. She’s still going strong.

If you like “Q” and haven’t been, do yourself a favor and get up really early some Saturday morning real soon and make the drive to Snow’s. If you get there after 10 or 10:30, you’re probably already too late. And do not hesitate to wander around back and kiss Ms. Tootsie’s cheek. She couldn’t be nicer and it’'ll be something you brag about the rest of your life.

(Hat tip to YeaTexasFight on Shaggy for posting the vid.)

I saw her interviewed recently. A treasure for sure.

By happy coincidence, I’ll be driving from Houston to San Antonio early in the morning a week on Saturday. I feel a small detour might be in order.

You reckon arriving by 0930 would suffice?

If I make it, what should I order?

9:30 would be fine especially if you call ahead and place an order which you would pick up out back, skipping the line altogether.

You should know that it’s quite a detour off of I10. It adds a good hour to the trip from Houston to Austin, it would be twice that for the Hou-SA trek. I am NOT trying to dissuade you by any means. It’s very much worth it and we make the round trip from Houston to Lex and back a couple of times a year just to have the feast with the family.

If you go, brisket and sausage are a must. The sausage isn’t nearly as good as used to be when we would wrap it in a slice of white bread, nibble off an end and squeeze out the grease in a thick molten stream.

Additionally, I beg you to get at least a half a chicken. It’s different than any you’ve had and something most b-b-qonisseurs usually eschew. Mom’s fave.

Chicken?! That would be a first.

(I’ll take your word for it though).

Mrs. Flavors and I will be on a road trip and barbecue will be a recurring feature (Kansas City, St. Louis, Memphis), so there’s no rush to get to San Antonio. The original plan was to detour via Lockhart as we’ve never been to Kreuz’s (and getting some more of that fantastic Black’s brisket wouldn’t go amiss) but I hear Kreuz’s isn’t the powerhouse it once was.

So Snow’s it is. It’s been on my radar since it won best-in-state in Texas Monthly several years ago, but as it’s such a trek from Houston I’ve never managed to make it there. Thanks for the reminder. Serendipity, dude.

Calling ahead on the day would be a problem due to ridiculously expensive cellphone roaming charges but I’ll try calling them from the UK on Thursday before we depart.

So…jalapeno or regular sausage? Couple of each?

Since you may never be that way again, I suggest you try as big a variety as you can. (But don’t sleep on the chicken!)

The lines aren’t too bad these days. Be sure to talk to folks in line with you. You will probably, (but not “certainly!”) have come the farthest that day. I think they still have a guest book inside.

And of course, as noted above, be sure to walk around back and eat at one of the picnic tables and speak to Ms. Tootsie and Mr. Kerry. As busy as they will be, they will always stop to chat and take a picture with anyone. Just lovely folks.

I hope you enjoy it. I’m pretty certain you will.

Chicken?
That’s always what I order first and my fondest memory of eating here.
Brisket, sausage, Wonder Bread. Nothing Finer.

Okay then, I’ll try to get a little sampler of everything. Including chicken. I can microwave any leftovers for dinner.

And if you reckon the lines aren’t as bad as they once were I guess I can take my chances on the day. Car rental at IAH opens at 0600 and I’ll be first in line!

(I could’ve picked up the car the day before but…British Airways. Free booze. The two most popular words in a Scotsman’s vocabulary.)

There will be a line, but it shouldn’t more than ten or fifteen deep.

Have a great trip.

As for “free booze”, I’m surprised you understand the term as I’ve heard that no Scotsman’s ever uttered it.

They are the best. So friendly too. “Here, have another one for later!” You don’t hear that on United.

Indeed. They don’t tend to come around much after the dinner service, but I’ve never had a problem strolling up to the galley for a top-up. Or two.

Okay then, I’ll try to get a little sampler of everything.

I just got back on Monday morning. Give me a day or two and I’ll report back with a photo I took of the food.

So we made the pilgrimage to Snow’s on Saturday 14th May. We were slightly delayed in leaving Houston and didn’t make it there until 0940. Thankfully the line wasn’t too bad - there were only around ten people in front of us. 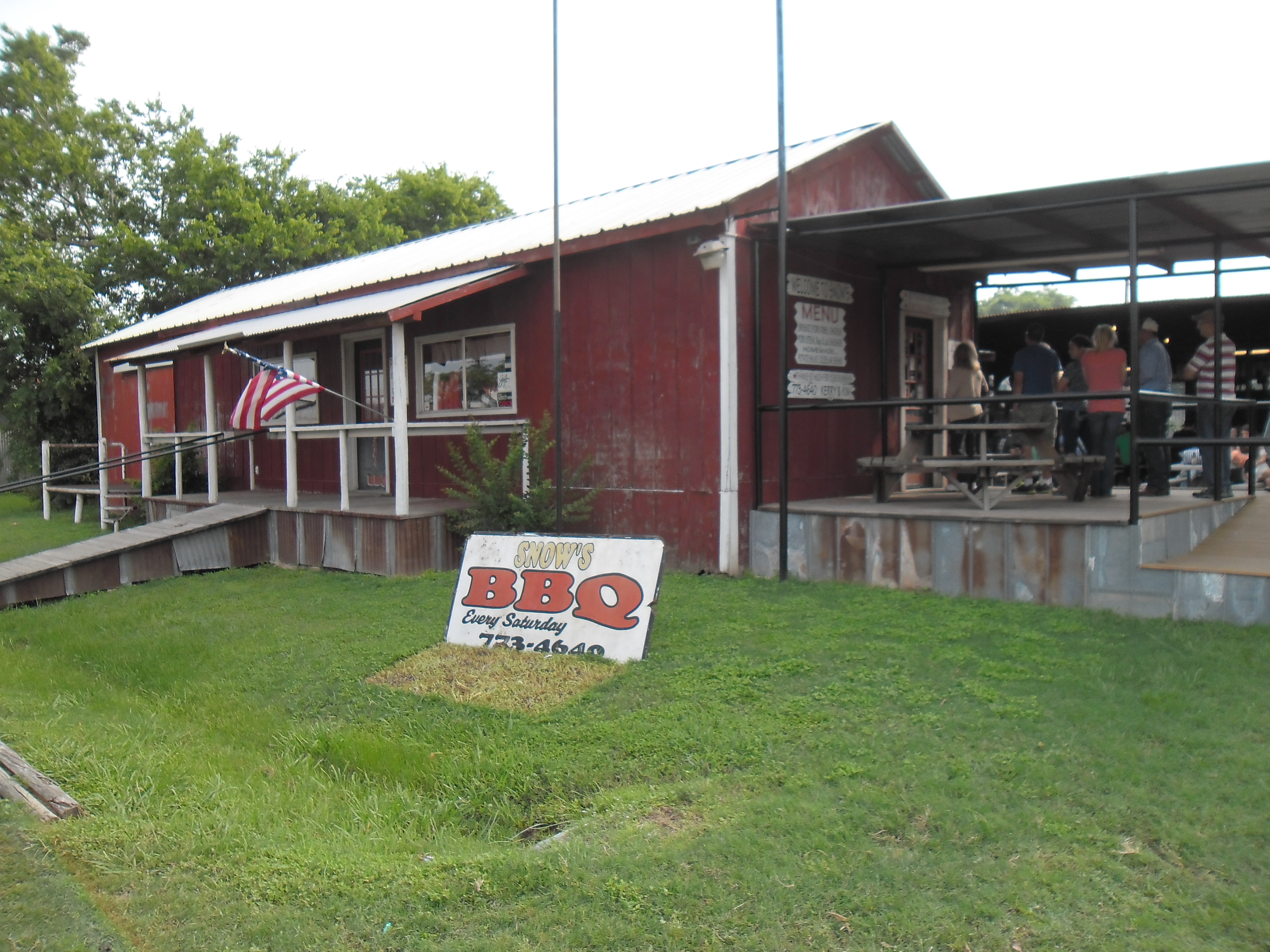 Here’s what we ordered… 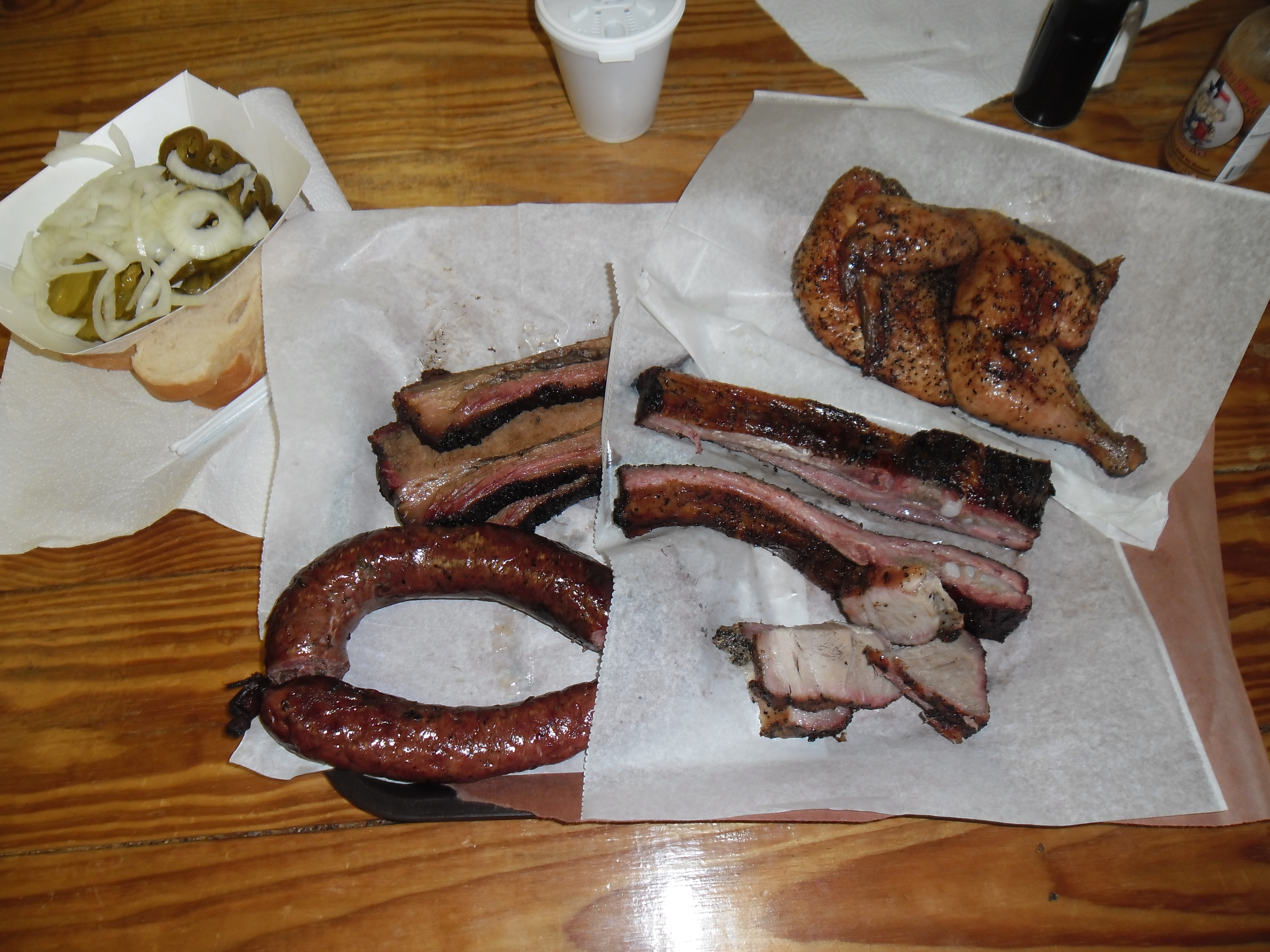 I think that was everything on the menu with the exception of the turkey, because…turkey.

The fatty brisket was a brisket of two halves. See the lower half of the middle slice in the picture? It’s got a perfectly rendered line of fat and a great smoke line and a gorgeous crust, which I’m guessing was just salt and black pepper. It was very good indeed. Perhaps not as smoky as Black’s but certainly up there with the best brisket I’ve had.

The other half was tender enough but a bit dry. As in, it-needed-sauce-dry. It’s possible it had been sitting in the steam table for a bit too long and it might have been better if I’d arrived earlier.

The pork shoulder was a little underwhelming too. Again, tender enough but a bit on the dry side and not wildly flavorful.

Now on to the superlatives (and I may run out of these).

The pork ribs were absolutely fabulous. Possibly the best I’ve ever eaten. Perfectly tender without being overcooked, smoky all the way through and with a delicious, heavily peppered crust.

The sausage was definitely the best I’ve had anywhere in the States. Juicy, coarsely ground, peppery perfection. Mrs. Flavors preferred the plain sausage by a whisker, claiming that the one with jalapeno detracted slightly from the flavor of the meat. And she has a point, although I preferred the mild kick from the jalapeno one.

(One of the problems I tend to have with Texan BBQ sausages is the skin. Why is it that British bangers have skins that are thin enough to almost disappear when cooked and Texan sausages have skins that more often than not have to be removed because they’re so thick and chewy? This wasn’t remotely a problem at Snow’s; I was just wondering.)

Many thanks, DoobieWah, for insisting I try the chicken. How they manage to cook it so well, I’ve no idea. Great skin with a light crunch and so, so juicy. It was running copiously down my arms, especially with the thigh and drumstick.

Snow’s really does deserve all the accolades it’s received and I’m really happy this trip to the States had me in the vague vicinity on a Saturday morning.

Final picture of the smoker out back… 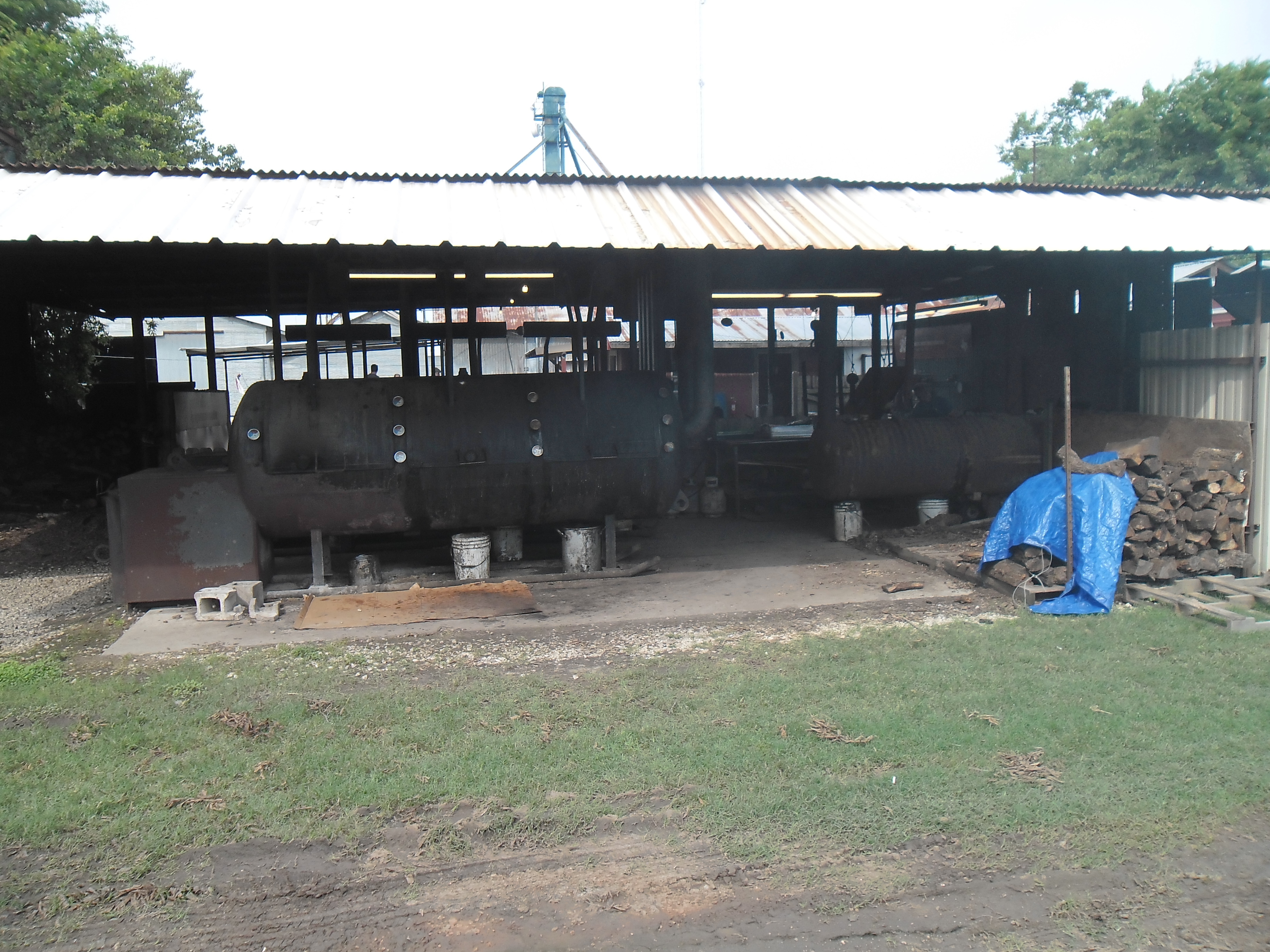 I’ll be back in a few more days with a minor trip report from the rest of the vacation.

Glad you enjoyed it.

Hopefully you got a pic with Ms. Tootise.

I look forward to the rest of your trip report.

I just got back on Monday morning. Give me a day or two and I’ll report back with a photo I took of the food.

j/k of course, but would love to hear about the rest of your visit and your culinary souvenirs.

You’re right, of course, I DO owe you.

And I’d completely forgotten to report back on the rest of the trip. I’ll go through the photos I took and post them up in a day or two. Promise.

As for the culinary souvenirs, one of the recipes I was doing the shopping for was this one for “Texas-Style Chili with Slow-Cooked Brisket” which I got around to cooking last week.

Given the industrial-sized quantities of beans and tomatoes in the recipe I can already hear the groans about this not being remotely “Texas-Style” but that said, it’s really rather good. The online butcher I’ve been using for several years recently started offering bone-in brisket so this went into the slow cooker for eight hours, supplemented by a couple of ox cheeks I had in the freezer. The only deviances from the recipe I made were to chill the cooking liqour overnight to remove the fat and replacing some of the chili powder with a few dried anchos.

Incidentally, this means that I’ve now got most of a can of chipotles in adobe sauce sitting in the fridge, so if anyone has any suggestions on what to do with them, I’m all ears.

I actually have two versions I cook on the reg.

One is my grandmother’s chili that takes about half an hour. It’s simple as can be, and is soooo addictive that I usually eat a whole bowl’s worth one spoonful at the time directly from the pot.

The other is a slow cooked version that has a lot of ingredients, but a lot less than your recipe. I even sometimes, just sometimes, add beans, but never ever ever chickpeas or chocolate! Now, there IS in fact a use for chocolate in TexMex. It’s called “mole’”, but that’s a whole 'nuther deal altogether.

As for the chipotles, they’ll keep almost forever. Use 'em in marinades, eggs, stews, … Believe me, just keep them up front where you’ll bump into them and you’ll find a lot of uses.

We look forward to your pics, amigo.

Sounds like really good chili.
Right there with you on the chipotles. I keep them in the fridge at all times. Homemade chipotles from dried usually. Have family in Mexico and chipotle is always a stable for them

One of the things I also keep in the fridge is a blend of canned chipotle in adobo and guava paste. Sounds weird but I did this one time just because I had the block of guava paste and a couple of cans of chipotle and in my mind it sounded good so blended them together and now make it all the time. The sweet smoky hot blend works in so many things.

I actually have two versions I cook on the reg.

One is my grandmother’s chili that takes about half an hour. It’s simple as can be, and is soooo addictive that I usually eat a whole bowl’s worth one spoonful at the time directly from the pot.

I don’t suppose you’d care to share the recipe, if it’s not trademarked?