Hong Lim Market & Food Centre is a labyrinthian warren of street food dining gems situated on the edge of Singapore’s Chinatown. Yesterday was my first time back there in nearly 3 years, as the COVID lockdown made the Singapore- Penang commute rather cumbersome - until now.

Very happy to finally be able to catch up with my fellow Singaporean dining companions, most of whom I’d not seen in person since March 2020, when the COVID lockdowns began here.

Eating out at Hong Lim Market & Food Centre is not for the faint-hearted - it’s hot and humid, even for Singaporeans, and the most popular stalls usually have long lines snaking through the narrow aisles, as customers brave 30-45 minute waits in the queues.

But I’d not been back home for nearly 3 years, and my friends were willing to indulge me - two of them ventured to join the most daunting queues: 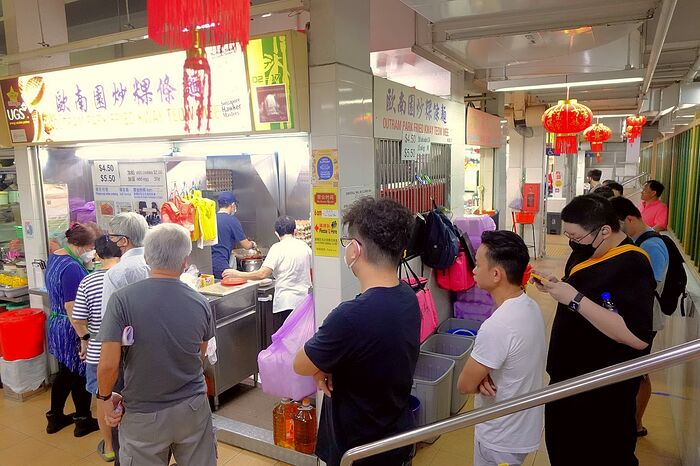 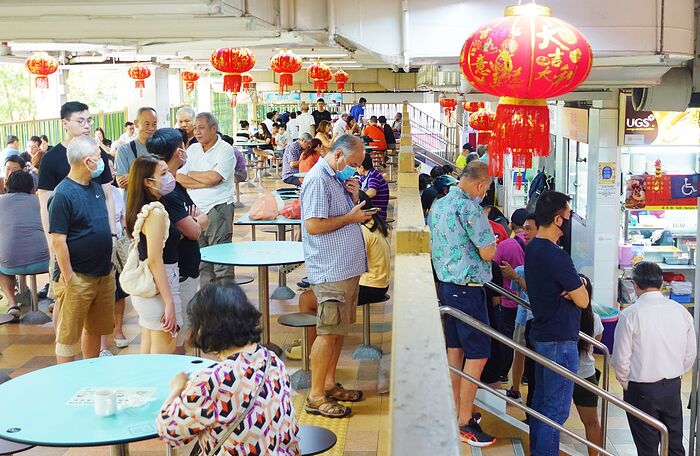 Singapore-style fried kway teow bore little resemblance to its Penang cousin, the char koay teow - whilst the latter is light-coloured with crisp, clear textures and flavours, the former is dark and gluggy - smoky delicious, the way Singaporeans like their kway teow noodles.
Singapore char kway teow is usually a mix of flat, white rice noodles (“kway teow”) and yellow Hokkien wheat noodles, fried together with beansprouts, cockles and egg in pork lard, flavoured with dark- and light-soy sauce, a smidgen of sweet, caramel sauce, plus some chili paste for the heat. 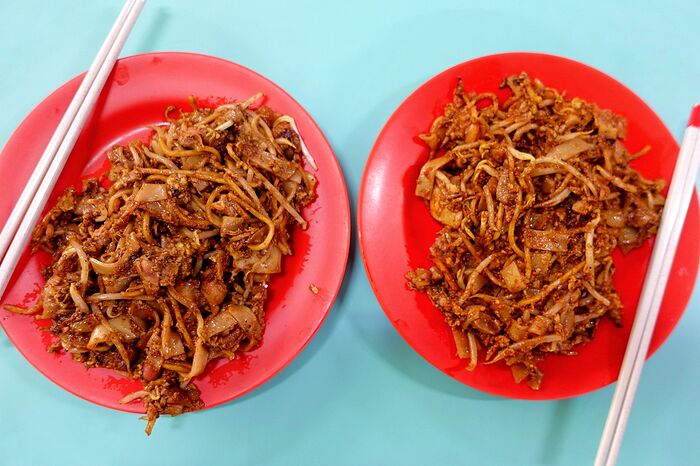 And Outram Park’s rendition is one of the most popular in Singapore! 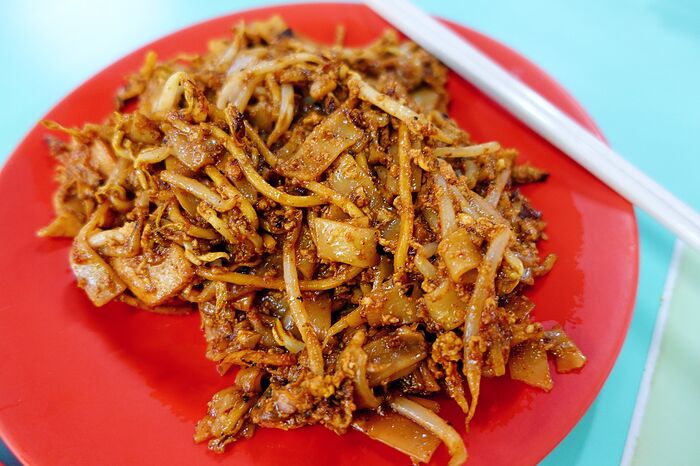 A comparison of the two regional variances of a street food of Teochew/Chiuchow/Chaozhou origin. 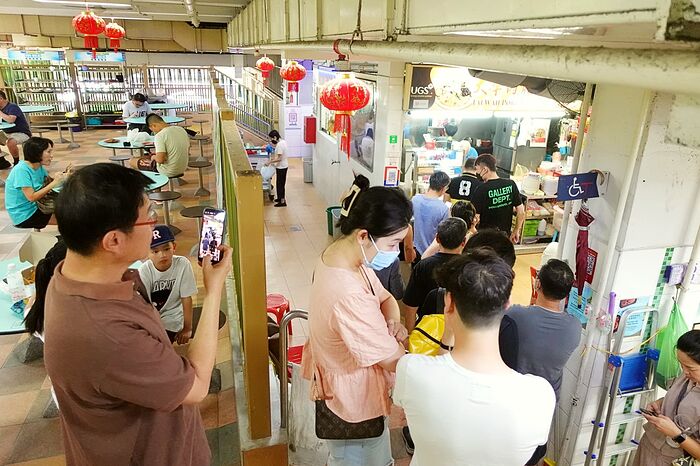 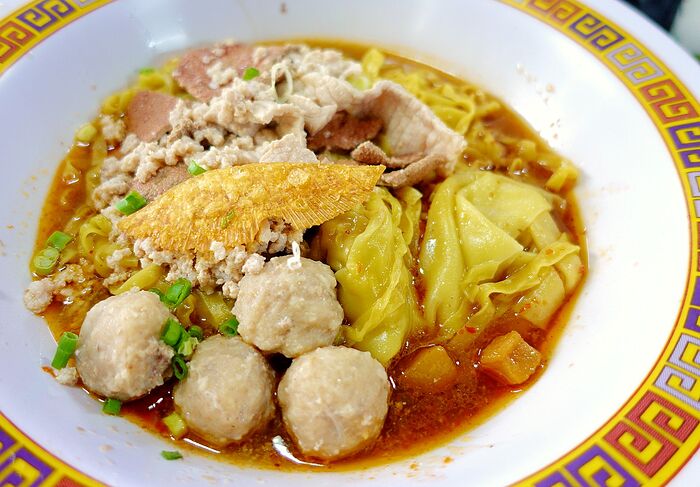 Absolutely delicious - I miss this dish so much, as one cannot find it in Penang, or anywhere in Malaysia, for that matter. I needed to come back to Singapore for this. 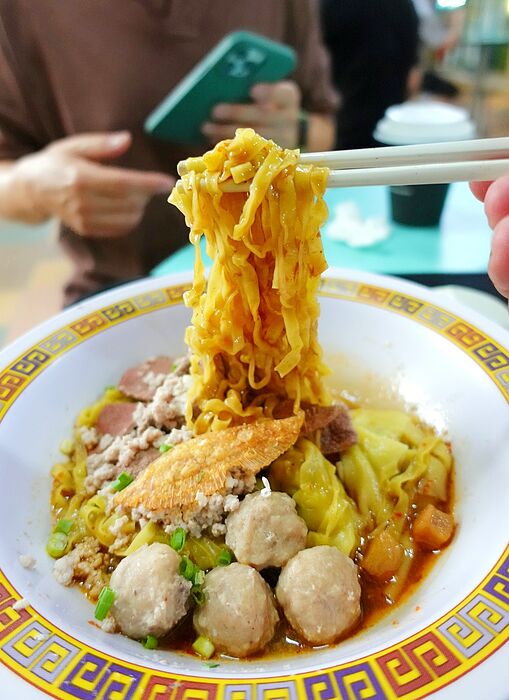 This was also the first noodle stall I introduced to Alpha Hound, Jim Leff, on his first visit to Singapore during our Chowhound days. 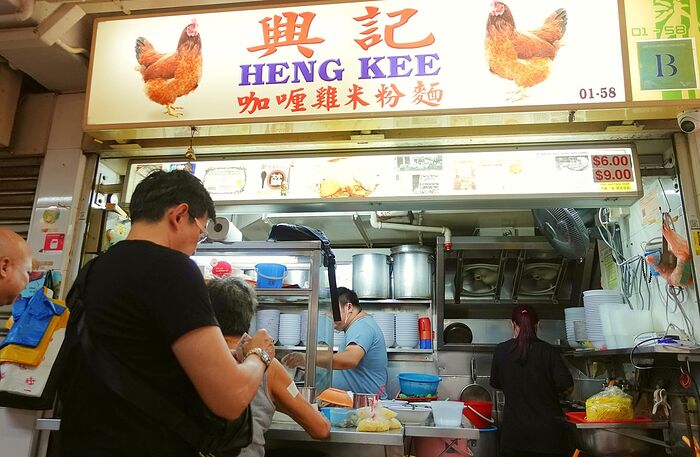 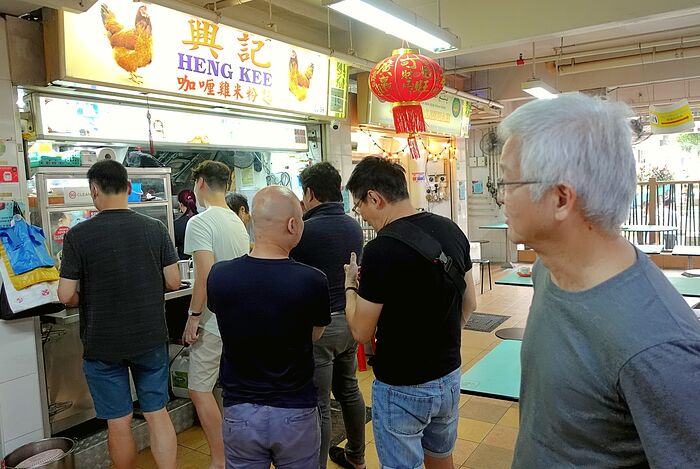 Heng Kee’s signature bowl of noodles would have poached chicken, curried potato, plus slivers of tofu puffs and fish-cake. 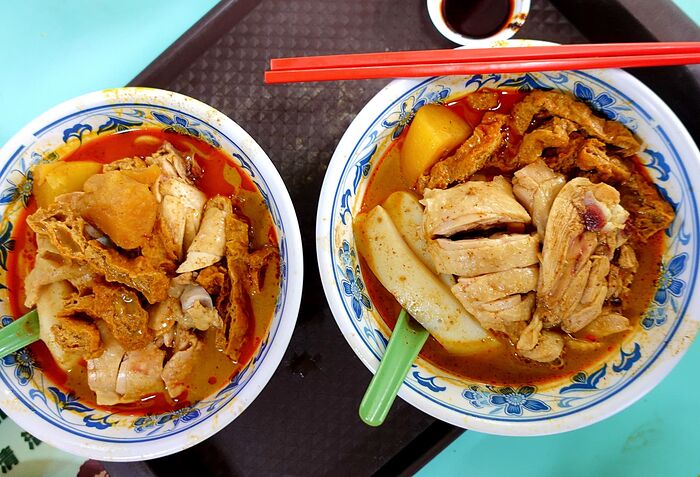 Sheer deliciousness that is to-die for! 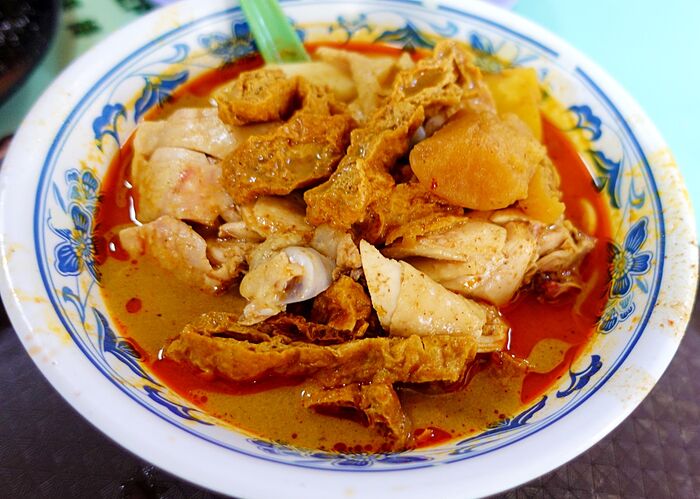 One can opt for the type of noodles to have - my fave is yellow Hokkien noodles, whilst some go for “chor bee hoon” (coarse white rice noodles). 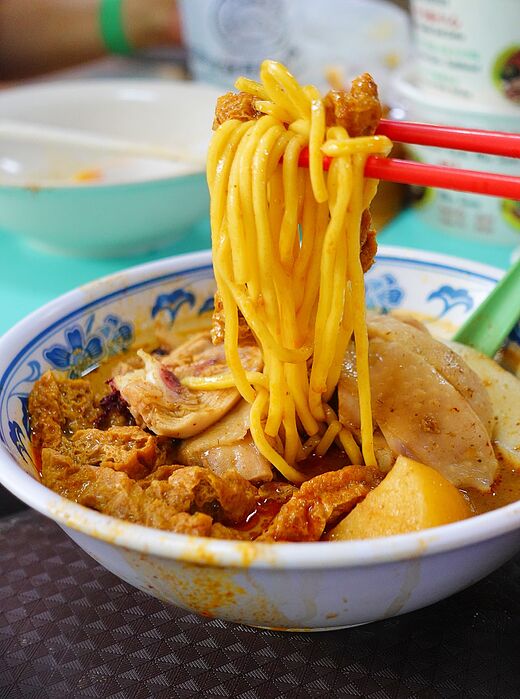 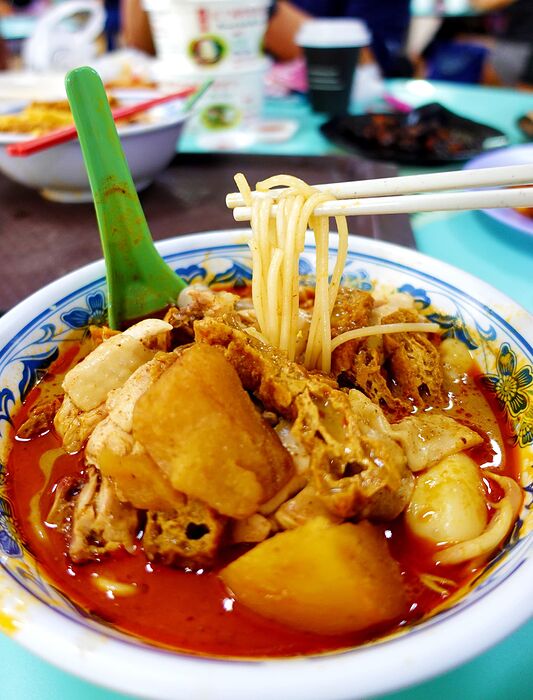 In Penang, the same dish is called “lor bak” - also a reference to the same 5-spiced pork roll: the “bak” means “meat”, but Penangites also refer to the tasty 5-spiced sticky brown sauce called “lor” which is served as a side-dip, besides the chili dip.

In Malacca, the same dish is called “hae phneah”, which actually refers to the prawn fritter in the multi-item selection. Malacca also only serves the dish with a red chili dip on the side.

Wu Xiang Xia Bing at Hong Lim Complex Food Centre has a nice selection, include a unique offering of long strips of steamed egg pudding with slivers of pork fat embedded in them 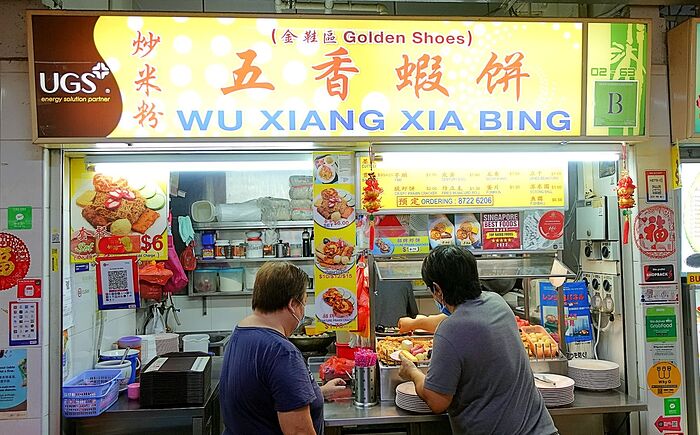 Make your selection from the choices displayed - the vendor will then re-heat the deep-fried items with a quick re-fry, and chop up all your choices before piling them on a platter

A platter of these tasty, deep-fried morsels is usually meant for sharing, as one simply can’t take too much of the heavy stuff by oneself. 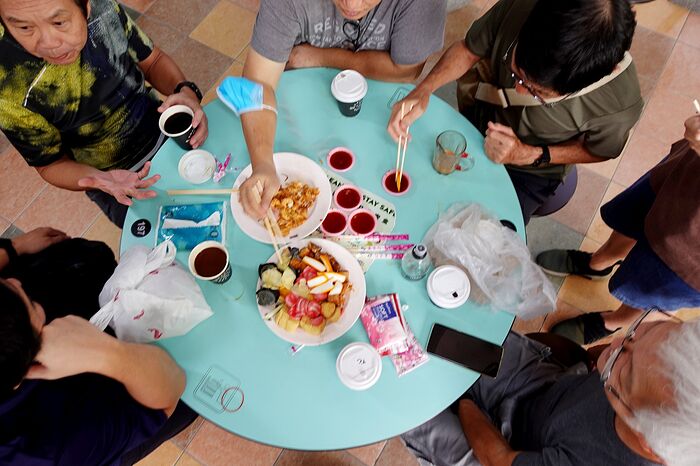 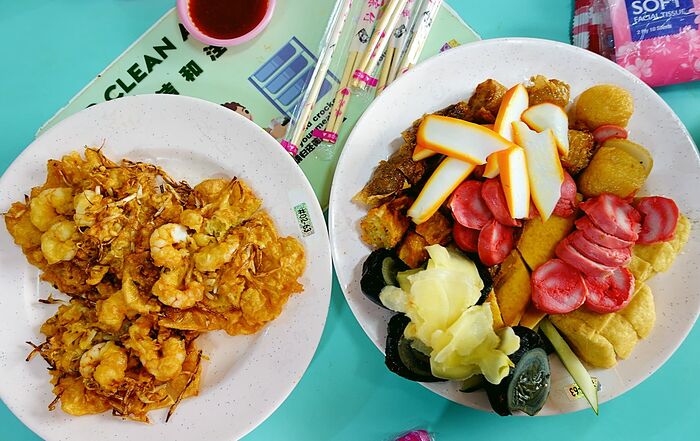 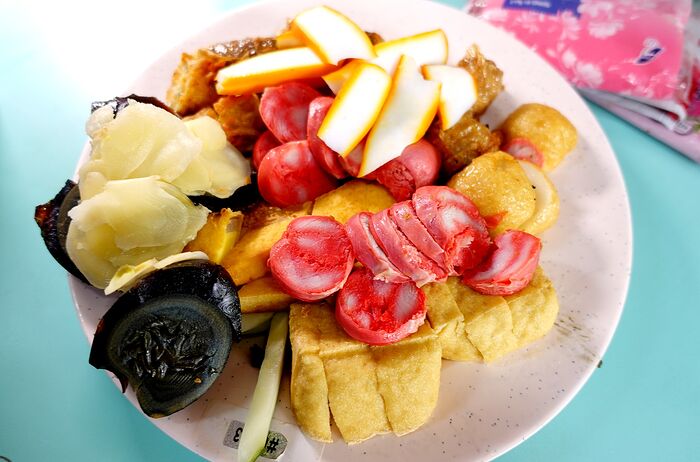 The same dish, of Hokkien/Fujianese origin, but known by different names and with regional variances in the composition of items offered in Singapore, Penang and Malacca.

Always fun to get-together with fellow Singaporean foodies - the last time we all got together, we were hosted by the Vietnam National Administration of Tourism to do a food tour of Hue, the old imperial capital of Vietnam. That was back in March 2020, before COVID struck and locked down the world.

One of us, KF Seetoh (2nd from left in the pic), is the one who brought Urban Hawker to New York, offering Singapore street food to Manhattanites. 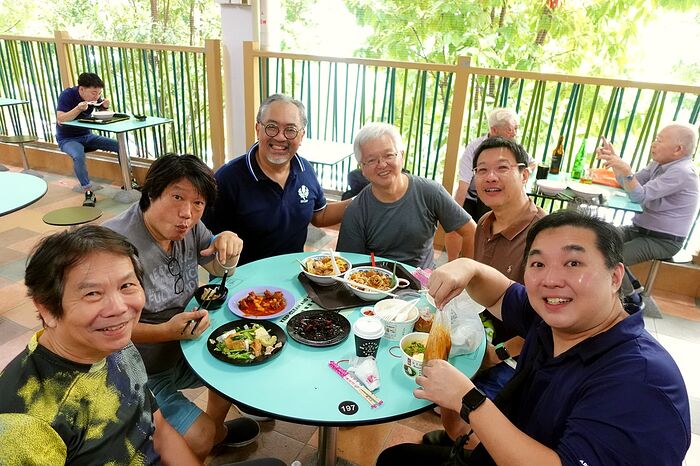 Your bless this site with your superb reporting and photography.

My pleasure - good things must be shared!

Amazing! Oh how I miss Singapore foods… Here is to hoping Singaporeair will have some good airfare deals later this winter so I can go for a stopover on my way to the beach!