I was first introduced to Spanish cuisine by a Spanish university mate in Western Australia back in the early-80s. Back then, it was impossible to find authentic Spanish cuisine in Perth, so she’d cook everything herself, then invited the more “adventurous” classmates over for dinner. Most Anglo-Saxon Aussie classmates weren’t so keen, as they’d still prefer to stick to the one-meat-and-two-vegies dinner plate back then. But we’d have French, Portuguese, Moroccan and even Ecuadoran classmates who’d turn up for her Spanish soirees.

Many years later, when I was back in Singapore, I’d yearn for authentic Spanish cuisine, but we’d never get those, as most of Singapore’s so-called “Spanish” restaurants (e.g. Goya at Melia, and Esmirada at Peranakan Place in the early 90s) rustled up food which had been localised to suit the Singaporean/Asian palate.

Singapore finally got its Spanish food “renaissance” in Aug 2012, when a whole phalanx of 14 ex-elBulli staff moved to Singapore and worked at the newly-opened Catalunya at the Fullerton Pavilion. It was headed by Executive Chef, Alain Devahive Tolosa, who’d worked at elBulli for a decade before its closure in 2011, and restaurant manager, Pol Perello, who was elBulli’s former director of communications and restaurant manager for 12 years. 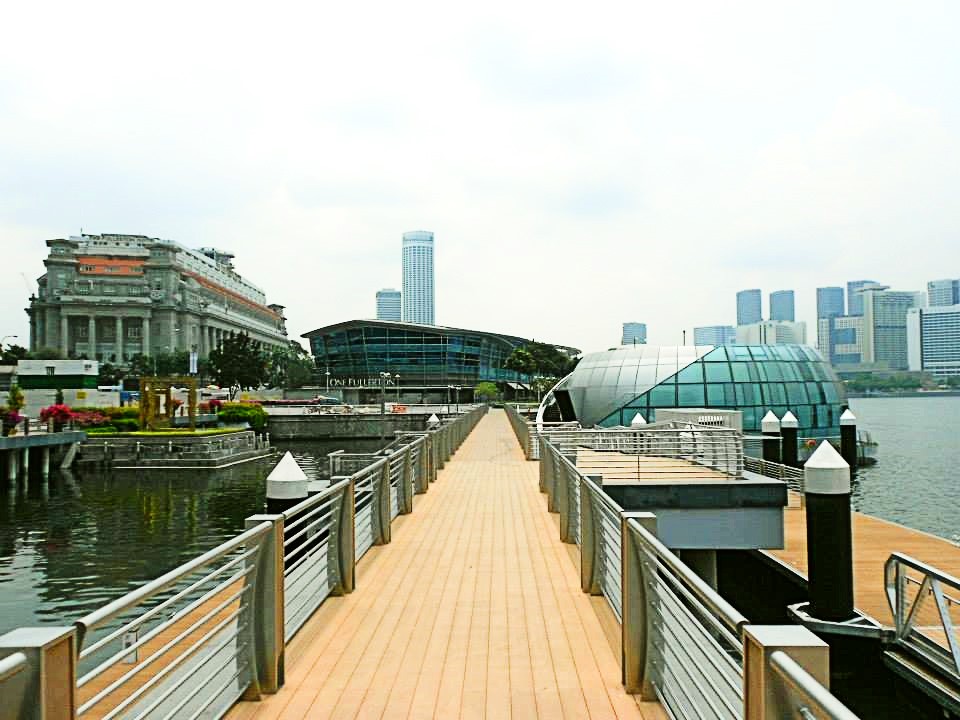 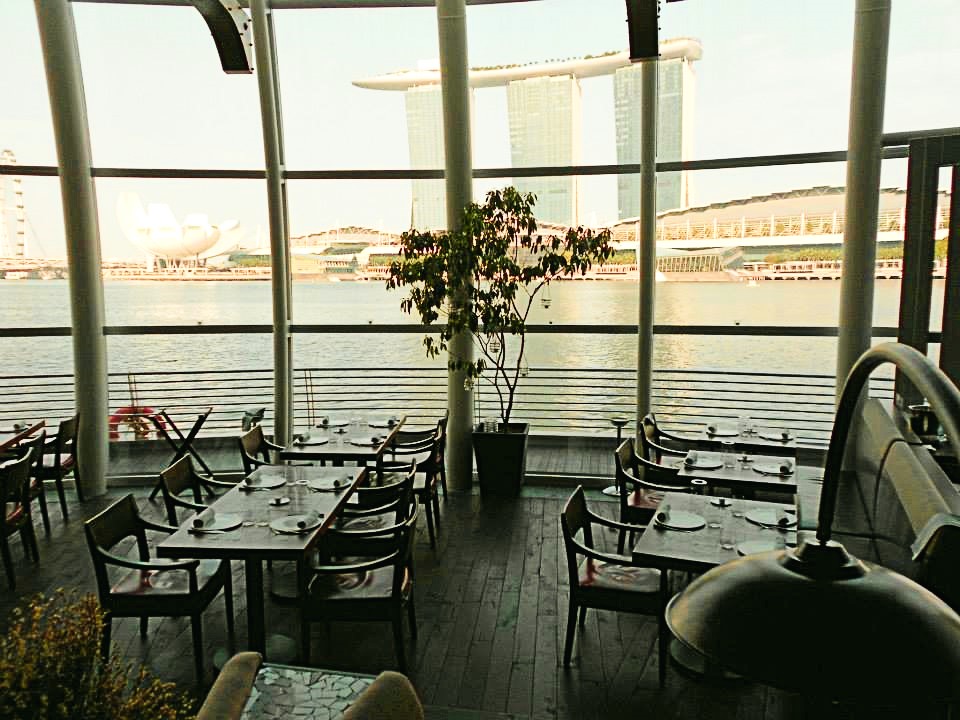 Its menu contained some of elBulli’s older classics, such as the spherical olives, which were all the rage back in the 2000s then. 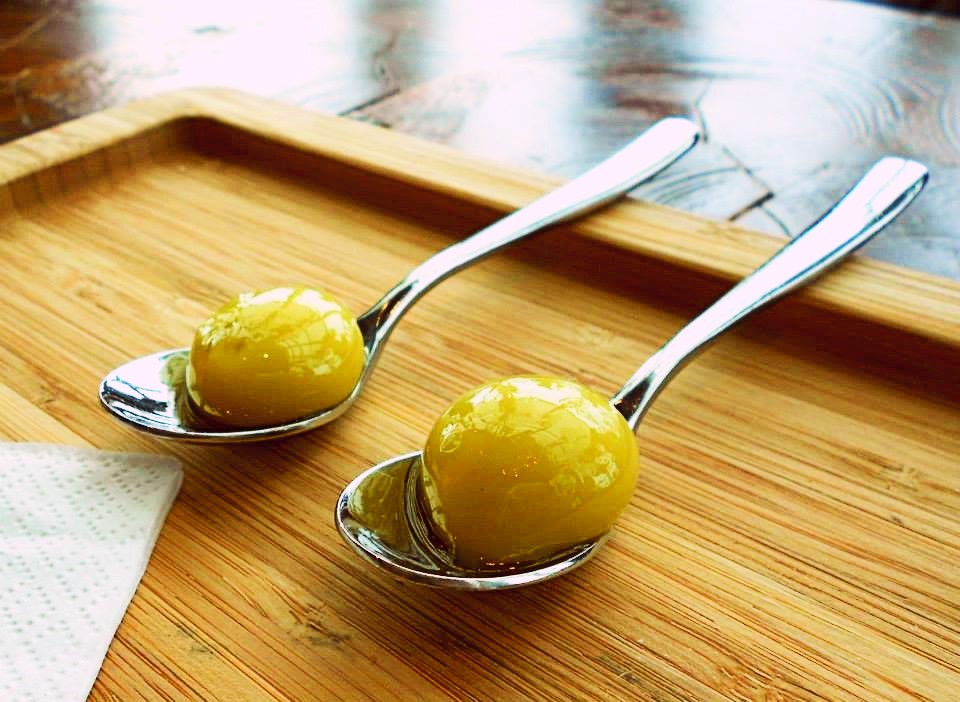 Another familiar elBulli staple was the deconstructed Spanish tortilla, which was presented in a Martini glass: you get caramelised onions at the bottom of the glass, which was then filled with an egg emulsion, and topped with potato foam. 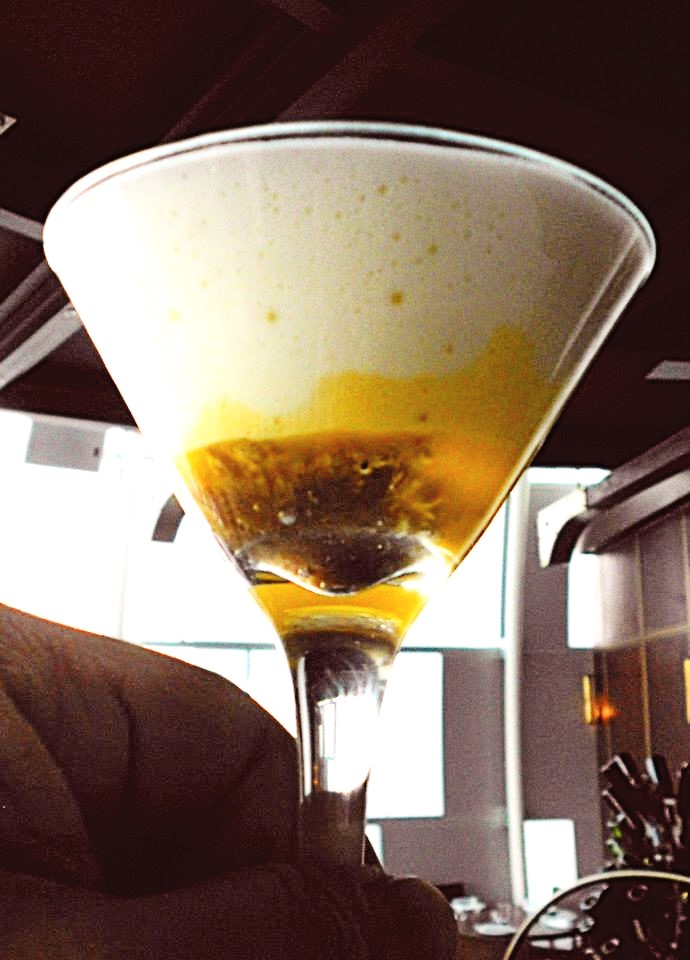 My fave item at Catalunya was actually one of their dessert items: the “torrija” - a delicious combination of the milky, smoky flavours of moist bread pudding and ice-cream. 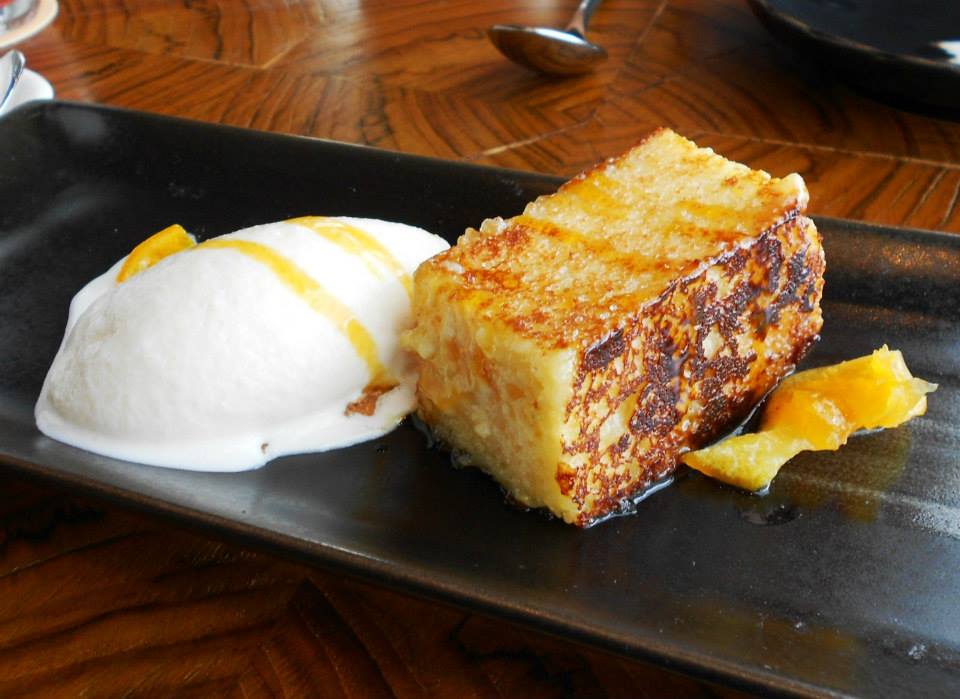 Sadly, Catalunya suffered the fate of many other good restaurants in Singapore: the fickle crowd moved on as soon as other newer restaurants came on the scene. It closed on 2 June 2016. But many of their staff stayed on in Singapore, moving on to open other smaller, niftier Spanish restaurants on the island. What they did was to bring Spanish cuisine to a whole new level in Singapore, and quite a few authentic Spanish spots popped up around the city.

My current fave Spanish spot in Singapore is Tapas Club at the Jewel - one of the casual tapas bars which offers quick service and really good cooking, courtesy of the Executive Chef, Jose Angel Alonso and his compadre, Sous Chef Manuel Berganza. 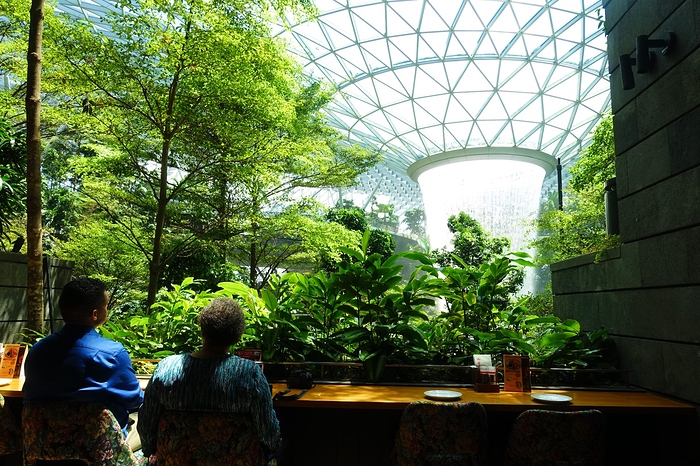 My lunch there last Feb consisted of:

The eatery was bright and airy, and looked out to the Jewel’s giant water feature. 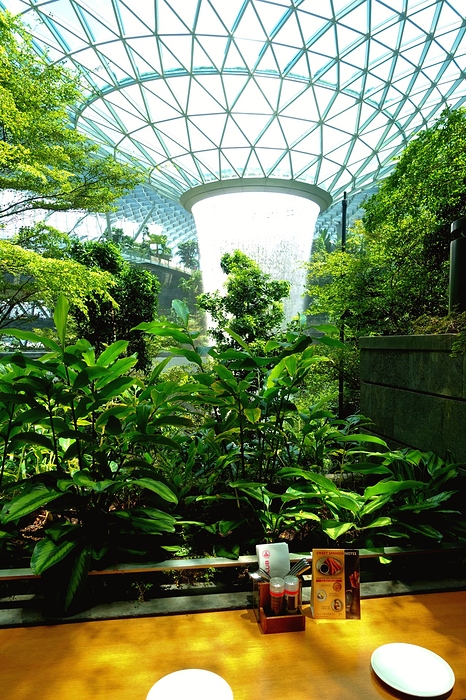 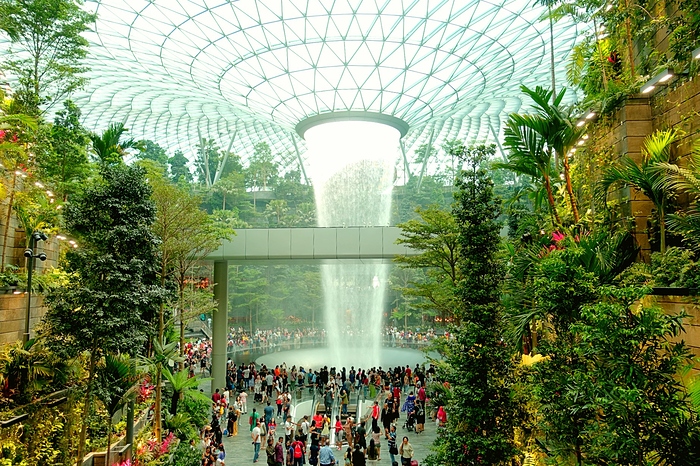 The dish of eggs, potatoes and jamon is common in jamon producing regions. Usually chips/fries topped with fried eggs and shredded jamon. The price reflects the quality of the jamon. 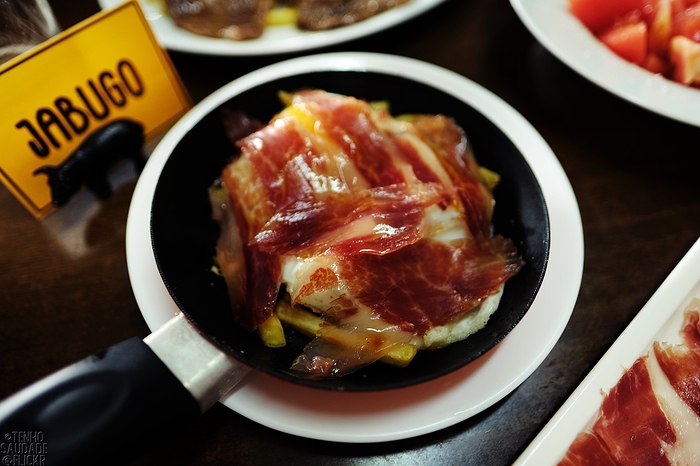 Have you been to Spain? If not then Why On Earth is it not on your list?!

I was deeply impressed by the quality of the jamon, and the simple and quiet life in this most famous jamon producing area in Spain (Sierra de Aracena, not only the town Aracena but also other villages in the whole Sierra).

Want to go back to Alajar just to eat at this restaurant again! ("Casa El Padrino). Padrino have their own pigs and jamon. Great service, always full, fantastic food. Stepping inside the restaurant is like going back in time. Beautiful and well maintained.

The jamon is so tender and flavourful it will make your eyes a bit moist. 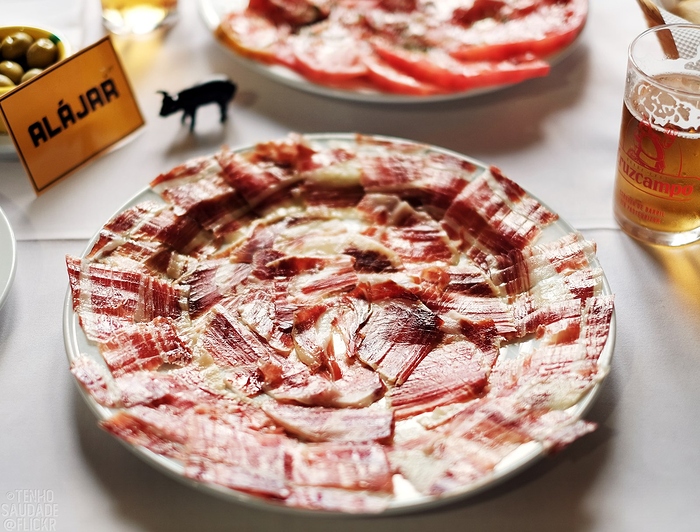 Local tomatoes (Rosa de la Reina variety) will stun you into silence, too. 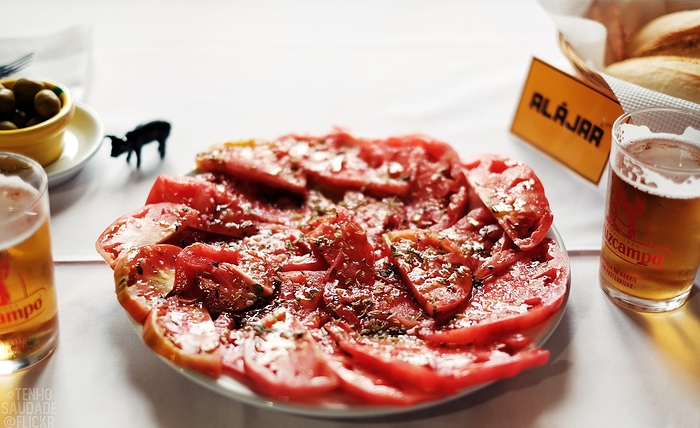 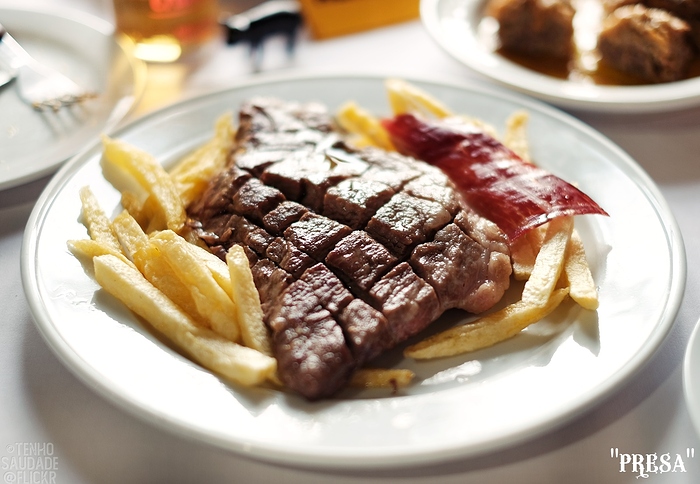 I eat very little pork at home (have to buy or order from a trusty organic butcher’s shop in the big city) but when in Spain I eat it with gusto. They know how to make pork taste good there. This is the same pork steak in photo above. 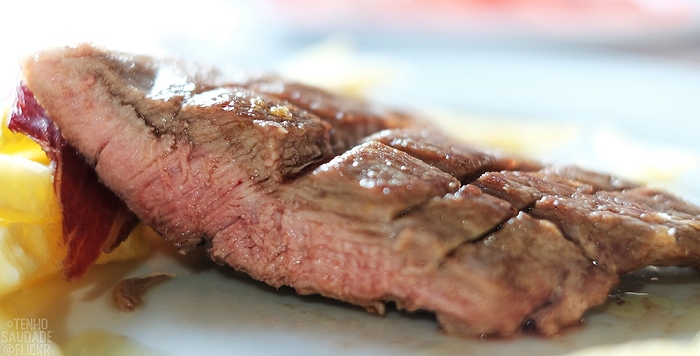 We will meet again, Senor Padrino. Don’t know when but we will. 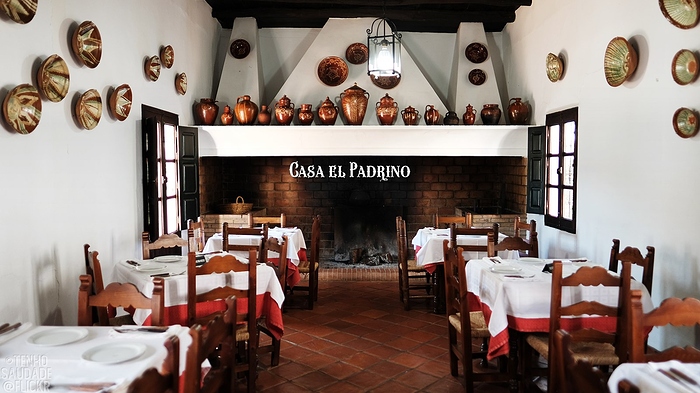 Have you been to Spain?

Yes, I had - business trips, conferences and vacations, but mainly in Madrid, Barcelona and Bilbao. I’ve also dined at elBulli in 2004 - we booked 6 months ahead. A must-do at the time.

I was supposed to go to Madrid, Barcelona, San Sebastian and Sevilla on a food trip this Oct, but doesn’t look like it’s going to happen now. Very disappointed indeed.

Of course you have been to Spain. Why did I even ask.

You mentioned Sevilla. If I could suggest one thing: avoid it. If you come from direction of Sevilla just keep driving/going through it, don’t stop, don’t even pause, and when you pass it you’ll reach Sierra de Aracena. Seville residents come to the villages in the Sierra at the weekend to eat the best quality jamon and pork.

After having spent 10 days in the Sierra it was like getting a slap across the face in Sevilla. I did mention my profound disappointment in my “trip report” last October. I will probably fly in or out of Sevilla again in the future but will only stay the night. Sevilla is gateway to the Sierra and surrounding villages. More interesting villages with good food and prices.

Thanks very much for the tip! Now I’m just wondering when we can ever get to travel again!

An elderly auntie of mine is in Bali - she went there for a 10-day meditation retreat last month and was supposed to be back in Kuala Lumpur on 27 March. But all the airlines started grounding their flights around that time - she decided to stay on till things return to normalcy. But she’s still there now, nearly a month later!

Forgot to mention Sivilla is beautiful, like much of Spain. I was disappointed in the quality of the food, mostly. You live in big cities and have no problem visiting crowded places but I can’t bear it. I think you’ll like Sevilla just fine. Much prefer small towns and villages.

I didn’t hate everything about Sevilla… the bull ring is enormous and very impressive. One of the most important and oldest bull ring in Spain.

the bull ring is enormous and very impressive.

I’d only ever gone to one bull fight In my life, during a visit to Madrid in 2004 thereabouts. I was staying at the Palace Hotel Madrid, and the concierge had procured the tickets for me in advance.

But the experience was a real eye-opener for me because, as a foreigner, we’d only been exposed to the parts involving the matador and the bull in their “dance of death”, as portrayed on TV or the movies. No one told me about the picadors on horseback with their lances, nor the protracted stages, with their bugles, which a bull fight ritually goes through. That day when I watched the bull fight was the only day I skipped dinner, as I felt rather queasy afterwards.

But, I must say, I rather preferred Madrid’s rich, greasy Castillian cuisine much more than Barcelona’s lighter Catalonian flavours.