The first Hainanese person recorded in Singapore was Lim Chong Jin, who stepped ashore in 1841. Ever since then, the Hainanese (who hailed from Hainan island off the southern coast of China) have been emigrating to Singapore and came to dominate its food industry. 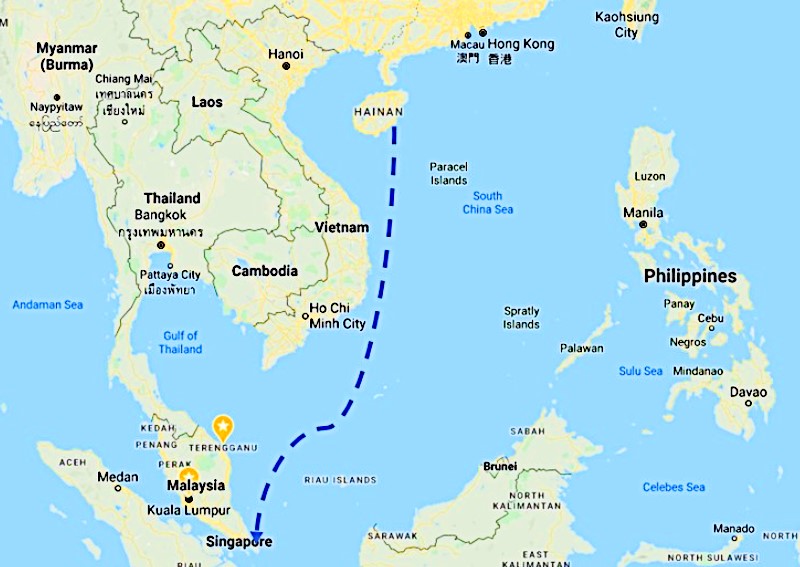 The Hainanese precinct in Singapore was Middle Road, then known as Hainan First Street, followed by Purvis Street (Hainan Second Street) and Seah Street (Hainan Third Street) which bordered on Raffles Hotel. The hotel then was the epicentre of social life in Singapore, and the Hainanese who were employed there settled in the streets close to the hotel, creating their own ethnic enclave. Ngiam Tong Boon, the Hainanese bartender at the Raffles Hotel, invented the eponymous “Singapore Sling” cocktail in 1915. 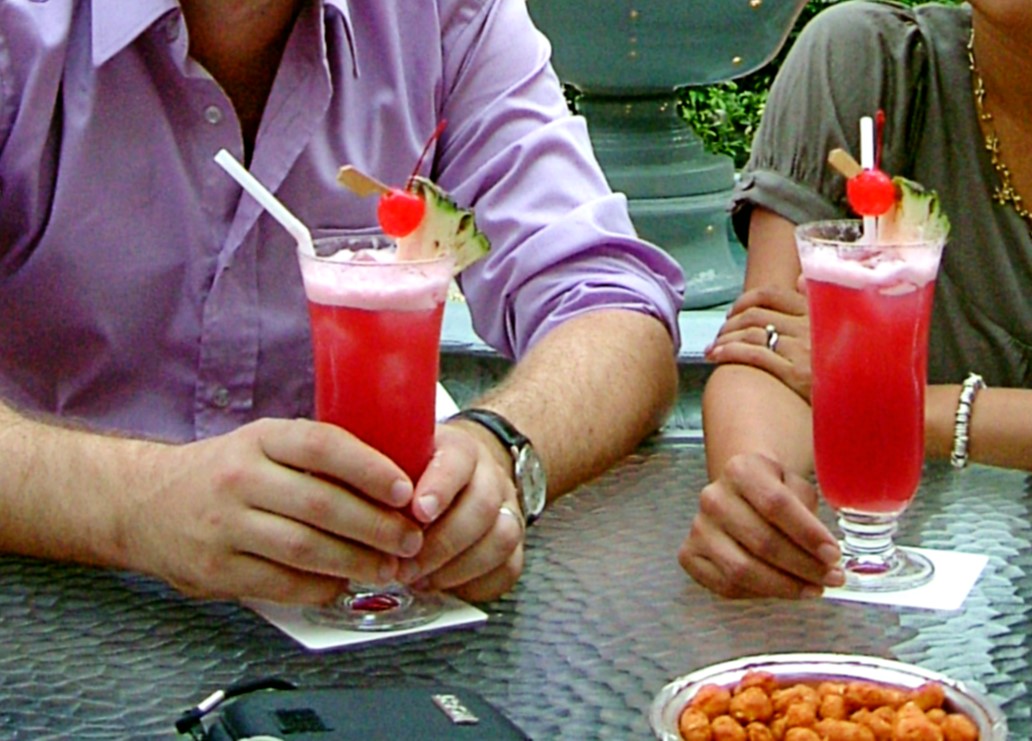 Yet Con on Purvis Street was opened by a Hainanese émigré, Mr Foo Tse Guan, as a kopitiam in 1940, offering Hainanese hotpot (called “steamboat” in Singapore/Malaysia) and other cooked dishes. There was also a chicken rice stall in there, run by stallowner-chef, Wong Yi Guan, and his apprentice, Moh Kee Twee. They had improved upon the traditional Wen Chang poached chicken-and-rice dish from their native Hainan homeland to come up with the famous Hainanese chicken rice rendition which we know today.

The chicken rice duo moved out of Yet Con kopitiam in 1949 and operated in their own shophouse, naming their enterprise Swee Kee at 51 Middle Road. Swee Kee became the best-known Hainanese chicken rice spot in Singapore, but closed down in 1997 when the Land Transport Authority of Singapore earmarked a row of old shophouses, which included its premises, for demolition to widen Middle Road. Sadly, Swee Kee never reopened as the chief “chicken chopper” decided to call it a day (he was already in his 70s then).

Over at Yet Con, Hainanese-style chicken rice continued to be offered, together with roast pork, and a variety of Hainanese cooked dishes. Yet Con has sadly allowed its standards to slide in the last 6-7 years. The old chef in-charge of cooked dishes had retired, without a successor to take over. These pictures are from 10 years ago, the last time we were still able to order our favourite cooked dishes like the stir-fried fish-maw with Napa cabbage, and the glass noodles with dried cuttlefish and dark soy-sauce. Today, one only gets to order the Hainanese poached chicken and crisp-skinned roast pork to go with their marvellous chicken rice. 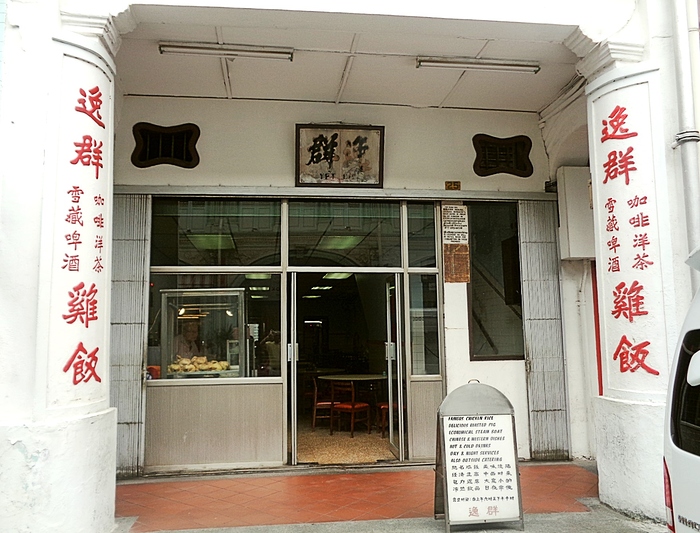 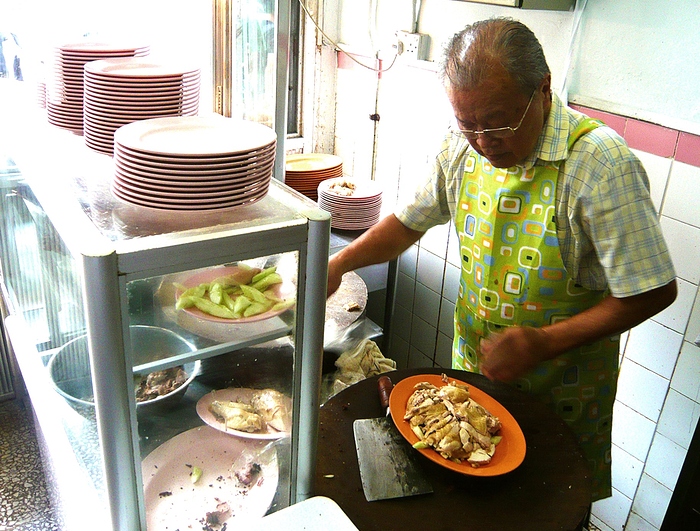 Singapore-style Hainanese poached chicken is stuffed with ginger, garlic and scallions before poaching, whereas the original Hainanese version in Wen Chang only called for stuffing the chicken with ginger and coarse salt.

It takes skill to time the poaching perfectly, so the chicken remained moist, yet silken-smooth in texture. The chicken is rubbed with a light drizzle of sesame oil & soy-sauce dressing before being served on-the-bone, usually on a bed of freshly-cut cucumber wedges: 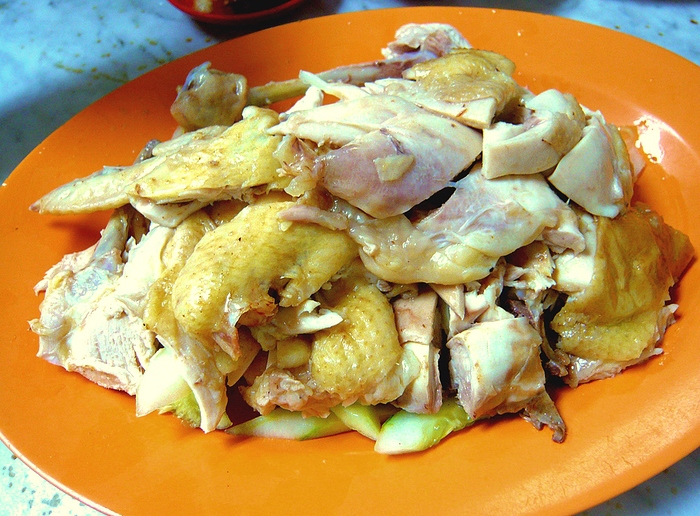 Exactly 80 years old this year, Yet Con is the last of my 3 favourite Hainanese chicken rice places in Singapore that remains today: Swee Kee closed in 1997, whereas Bee Tien Guan at Battery Road went defunct when the little row of shophouses where it was located was pulled down around 1994, to build the office tower, Republic Plaza. 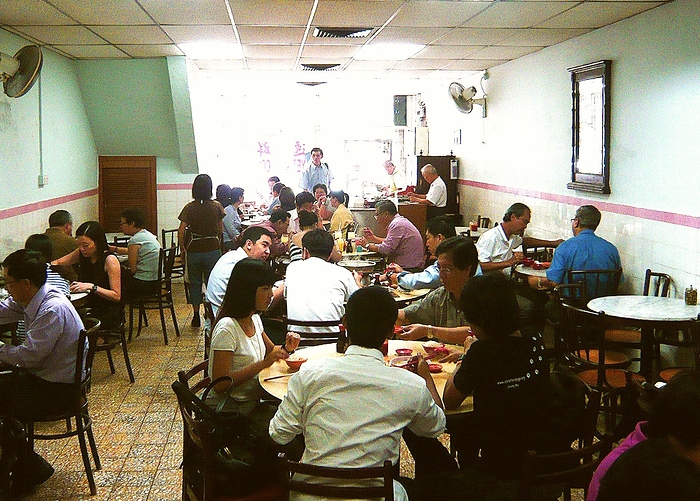 Yet Con survived World War II and the brutal occupation by the Imperial Japanese army, yet it didn’t stand a chance against COVID-19-induced lockdown. Also, the death of its octogenarian owner, Foo Chuan Tse, at the end of last year was a blow to the restaurant. He was a permanent fixture at the cash counter for the whole three decades when I was a regular there - tallying the bills using a 100-year-old heirloom Chinese abacus, passed down to him from his grandfather’s time. Foo Chuan Tse was the second-generation owner of the restaurant, opened by his father, Foo Tse Guan, in 1940.

Yet Con closed its doors for the last time 3 days ago, after serving generations of Singaporeans for 80 years. 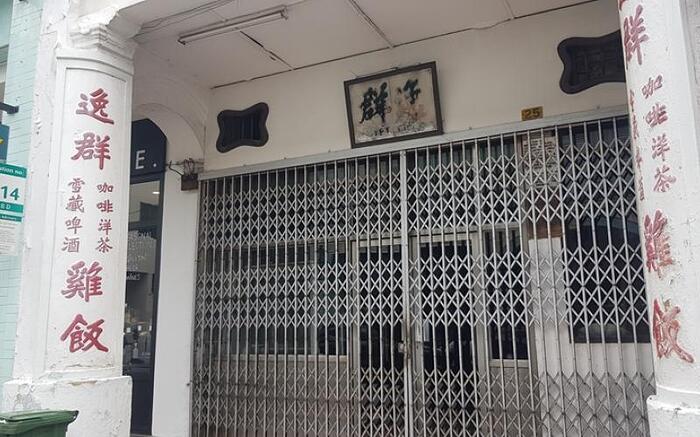 It’s sad to read of these closures, anywhere in the world, for any reason. This place, for its history alone deserved a better fate.

Hi Peter
I am a British-Indonesian cook with a catering business in the UK. My website/blog is at
tanamerah.com

One of my favourite dishes is Hainanese chicken rice, and I’m about to write a blog post with my own version of the recipe. While researching it for background I found your post about Yet Con on Hungry Onion. I’d like to link to it in mine—and I’d also like to use your photos of Yet Con. Would that be ok? I’ll obviously credit you.

Wow! Quick response lah!
Thanks a lot Peter
Ina (& husband Kevan, who helps me with my blog, etc)