One of the best dining experiences I had during my recent trip back to Singapore was at Gaig on Stanley Street. The two-year-old restaurant is the Singapore outpost of Barcelona’s 1-Michelin-star Gaig, founded in 1869. The Barcelonin Gaig is currently helmed by Carles Gaig, the fourth-generation owner-chef of the Gaig family that started it. His daughter, Nuria, manages the Singapore outlet - a pleasant, bright, little restaurant with a casual vibe. 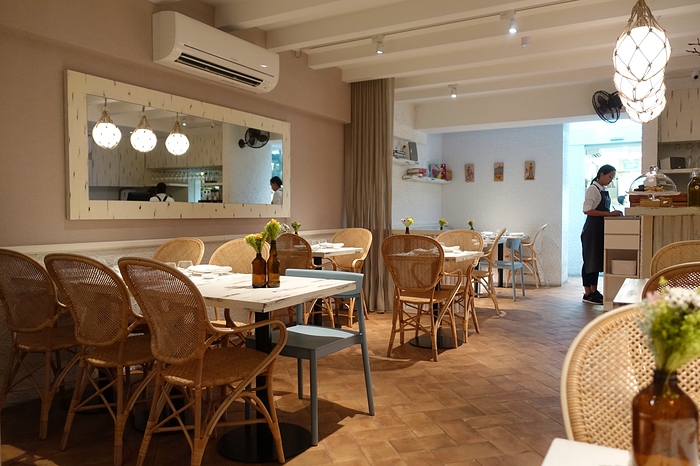 We started off with some red Sangria, and Pa amb Tomàquet: toasted slices of crusty bread rubbed through with ripe tomatoes, then sprinkled with good olive oil and salt. The bread went perfectly with the ethereal leaves of Jamón Ibérico de Bellota - acorn-fed free-range Ibérico ham, aged over two years. 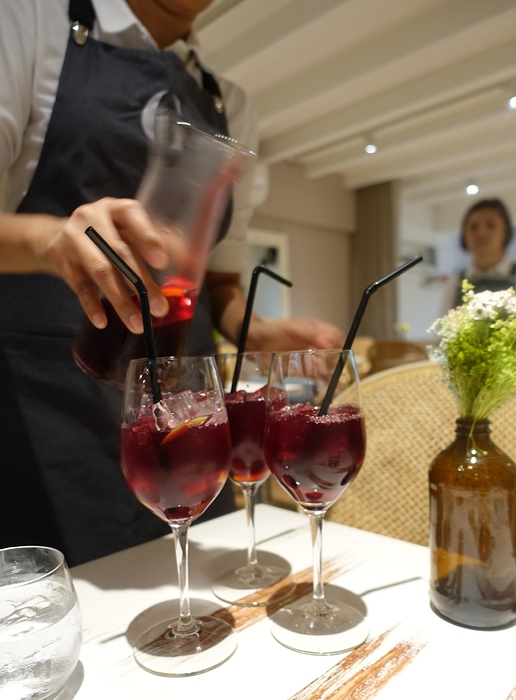 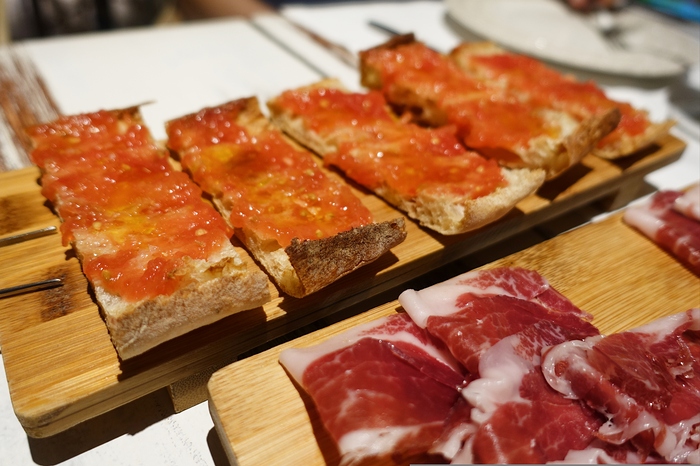 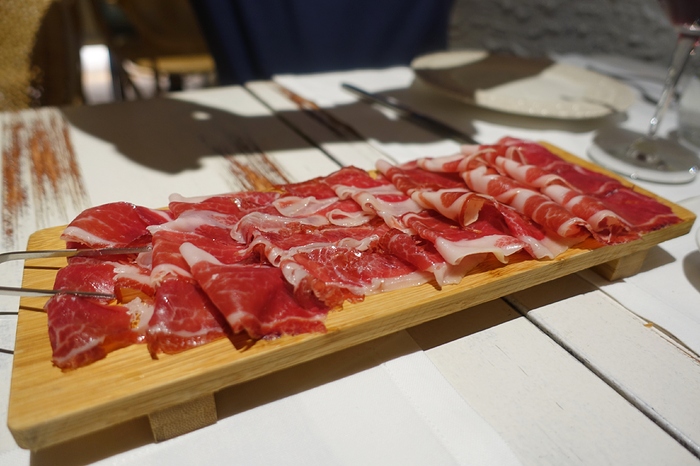 The bread was so good, we couldn’t resist ordering the Coca d’Esqueixada, which had salted cod in addition to tomatoes atop the bread. 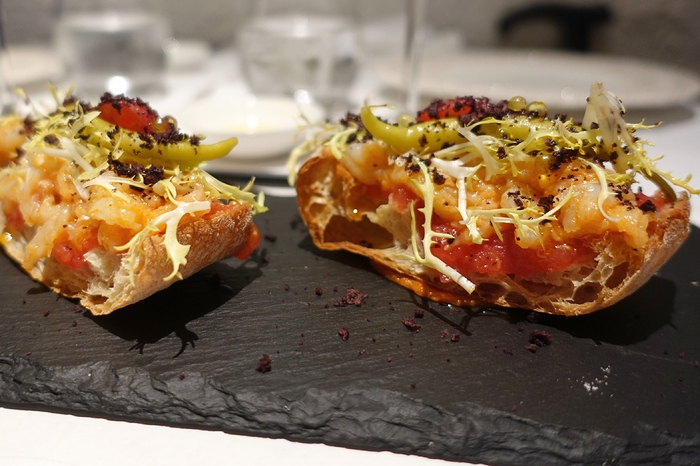 The Bomba de la Barceloneta which followed was a taste sensation - the potato ball almost seemed tweaked to suit the Singaporean palate with its spicy minced beef filling: 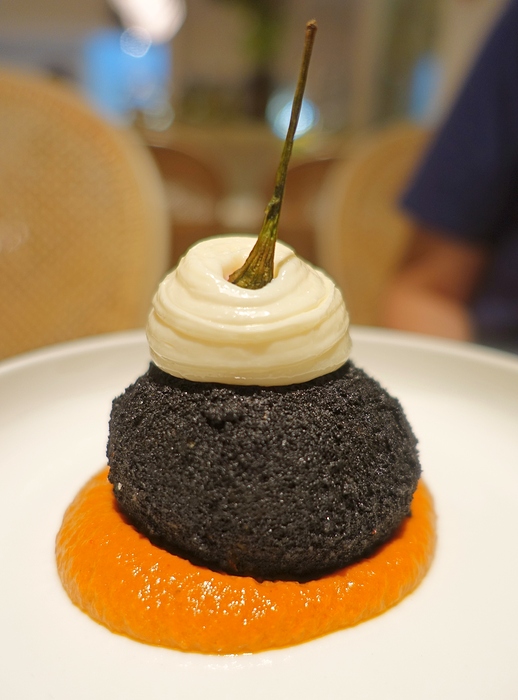 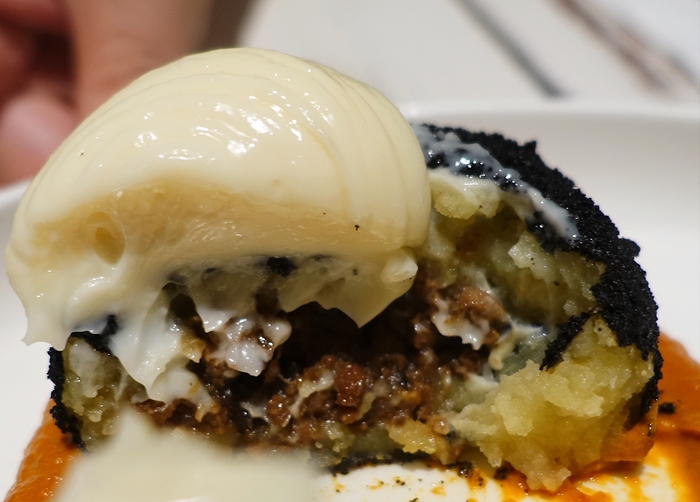 Next up was Gaig’s specialty dish: their traditional Cannelloni, made from an original 1869 Gaig recipe. The pale, cream-coloured cannelloni was filled with delicious, melt-in-the-mouth mix of shredded pork and beef, covered with a thick, ultra-rich béchamel sauce studded with finely-chopped black truffles. 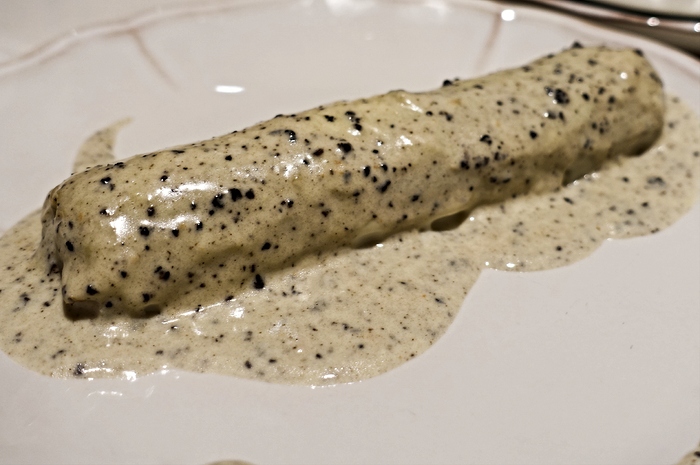 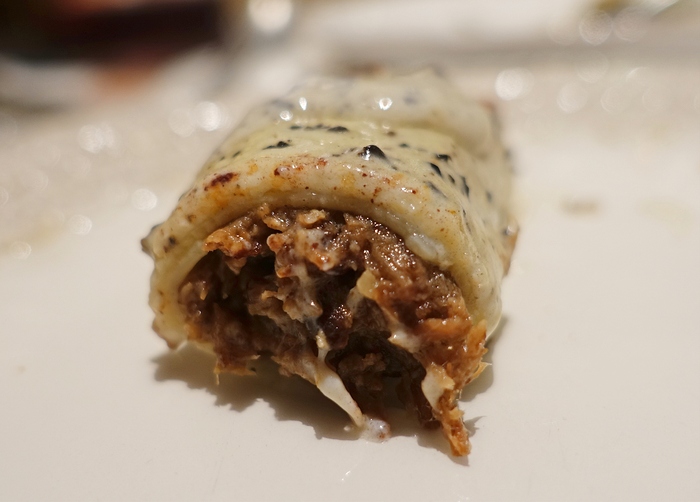 For me, the pièce de résistance for the meal has to be the Crispy Suckling Pig, with Coconut, Ginger, Dill and Apple. The golden, wafer-thin skin was crackling crisp, and shattered at the merest touch to reveal moist, pull-apart-tender meat. It was a taste sensation that I won’t soon forget. 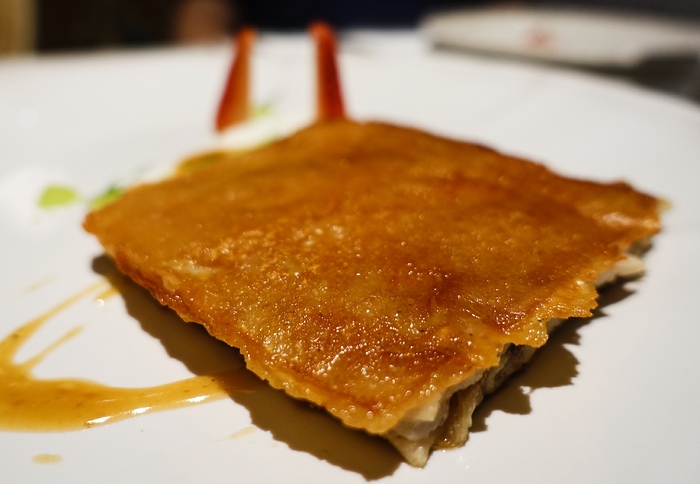 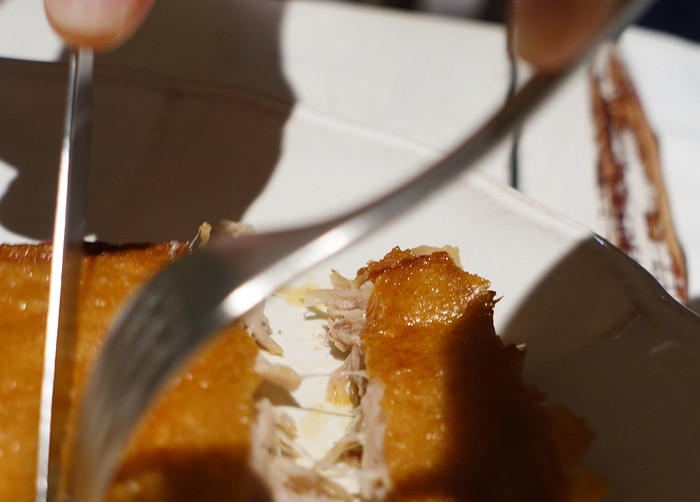 The Seafood Fideuà was the next to follow. This was an excellent rendition - Catalonian Executive Chef Marti Carlos balanced his flavours perfectly, and the seafood broth used to produce the fideuà was light, yet flavoursome. I could eat this every day. 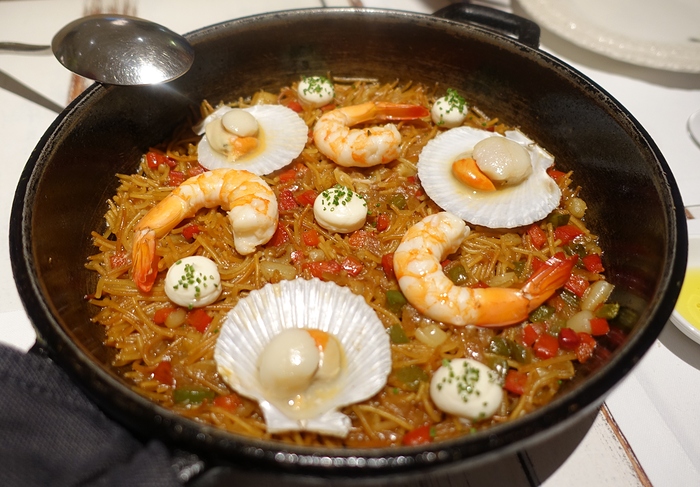 Both the desserts we had were also very good:
Catalan Crème Brûlée 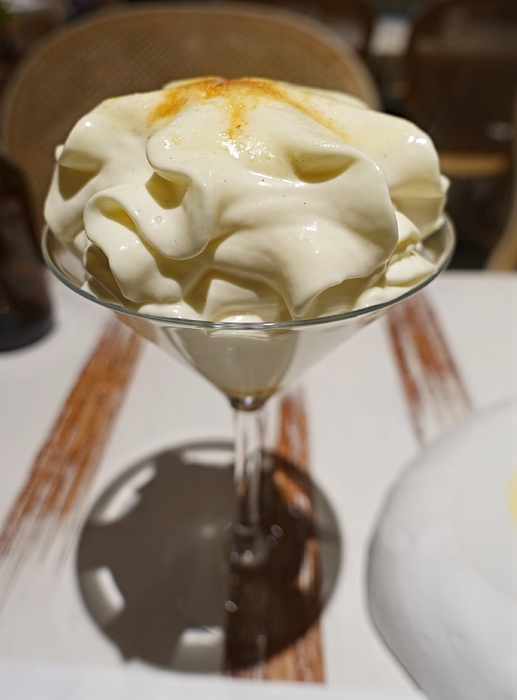 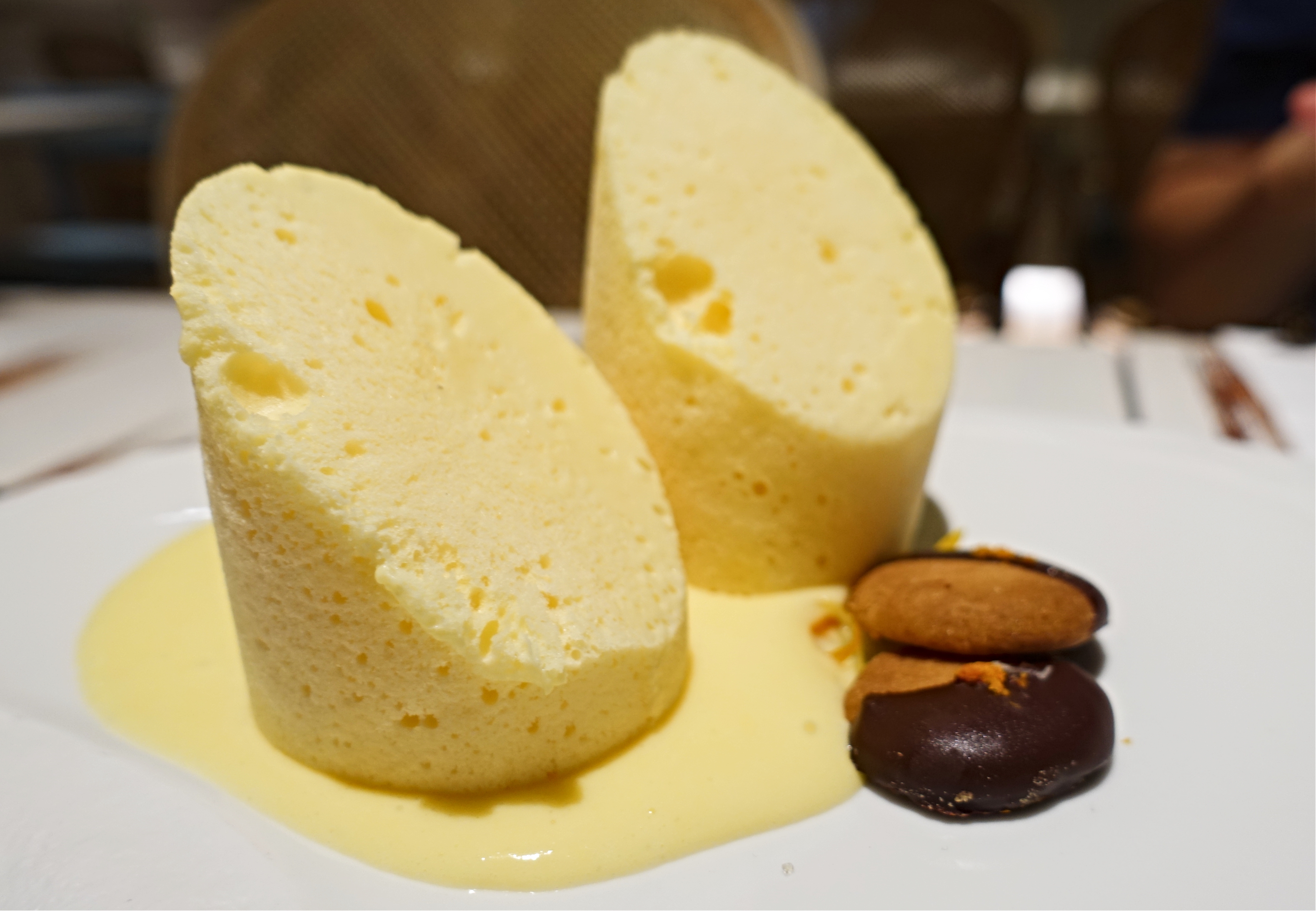 Very satisfactory meal indeed - well-executed from start to finish. Service was faultless, and the cooking was simply superb. Earlier, we had to decide between having a Basque dinner (at the much talked-about Basque Kitchen by Aitor, a mere two streets away) and this Catalonian option. No regrets that we chose here.

That all looks so good!!

We’re booked for a week in Barcelona in the late fall. Never too early to start drooling

We’re booked for a week in Barcelona in the late fall.

I’m so envious. Barcelona is one of my fave cities in the world!

I’m so envious. Barcelona is one of my fave cities in the world!

So glad to hear your love for BCN. We’re on a fairly flexible itinerary. Flying into CDG, ex-BCN three weeks later. A week in Paris a given. So many possibilities between Paris and Barcelona !! Btw, we love Basque food as well.

I’m a big fan of fiduea. Generally prefer it to paella.

I’m also a big fan of coca, although the version from Mallorca is very different from the one in your photo. There’s a very thin base (like a flatbread) with a fairly thin topping (chard is excellent)

Was thinking the same! I’m going in October. Peter, should I book? Was it madly expensive. Have to say I’m not a fan of Spanish food so this might hit the spot.

Singapore has better Spanish food vs the US

You likely would enjoy San Sebastian. It’s like Hong Kong – probably impossible to eat anything that is not tasty.

Peter, should I book? Was it madly expensive

I think you’ll only need to book a day or two in advance. It’s not terribly busy and, although it was almost full house later that evening, I noticed a few tables were walk-ins.
It’s not expensive - good dinner with wine will cost around US$80-US$100 per head.