My guy has been having hospital treatments three times a week at Guys Hospital so I’ve been meeting him in The City whenever I can. I’ve been really interested in the area around the Royal Exchange and on Monday I ventured down to Monument and we explored a bit. We were hungry! I thought we might find a patio or perhaps get some takeaway and sit somewhere. Instead my guy surprised me by saying if we could find a place that wasn’t crowded, he’d eat in (after promising he would never do that right now). Then began the usual routine where he races around from window menu to window menu, sometimes doubling back for another read…it’s quite a performance.

After looking at a few menus, he chose Simpsons Tavern, and in we went. Simpson is in an alley, easily overlooked, and has a long history, dating from 1757. The inside is small, although there’s a side bar and also a downstairs area. There are some dark wooden banquettes to sit in. The atmosphere was cosy, the servers had an intimate style, and the menu was meat-heavy. Since originally the owner had been known for cooking fish that were brought up from Billingsgate, I was surprised to see no fish at all. However, we were gently reminded of tradition when ordering.

We never eat large amounts so as always we had a starter and a main between us, hoping there was a good dessert to follow up with. Our starter was slow cooked pork belly, which was very tender inside but a bit tough outside. The crackling on the side was dangerously hard but eaten anyway. They brought us a nice dish of mustard. We also ordered the steak and kidney pie, and were informed this was always eaten with their ‘especially meaty’ sausage. Son on came the pie, with just the top golden crust. It looked small for two, but was so meaty we had trouble eating it all. The steak was very tender, the kidney was perfectly trimmed and in good proportion, and the gravy was worth every drop. As for the sausage, it was good but not that spectacular. At least we’d fulfilled the traditional aspects of the meal!

Well, almost. We had thought about dessert (but not terribly keen on the daily choice of apple crumble or ginger pudding) but the server again nudged us to try the ‘you must have this or you haven’t been to Simpsons’ choice of stewed cheese. This was a slice of everyday white toast, with a ramekin of cheese browned on top…like a rarebit, I said. It had a strong, cheesy flavour (the recipe I read said that it was stewed with lots of onion). We liked it, didn’t love it but again fulfilled tradition. Somehow that felt right!

My guy now says that we should hit all the old City pubs (does he know how many there are?) and try all these traditional dishes served the way they must have been for years. So the search begins for menus that don’t feature nachos or brownies - not so easy in 2021 no matter how historical the venue! 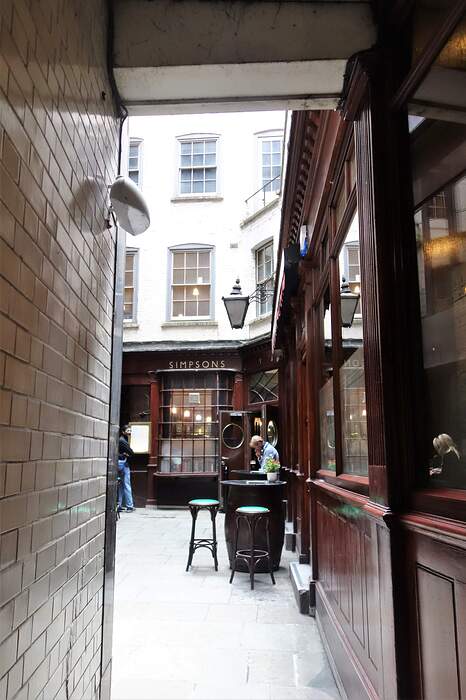 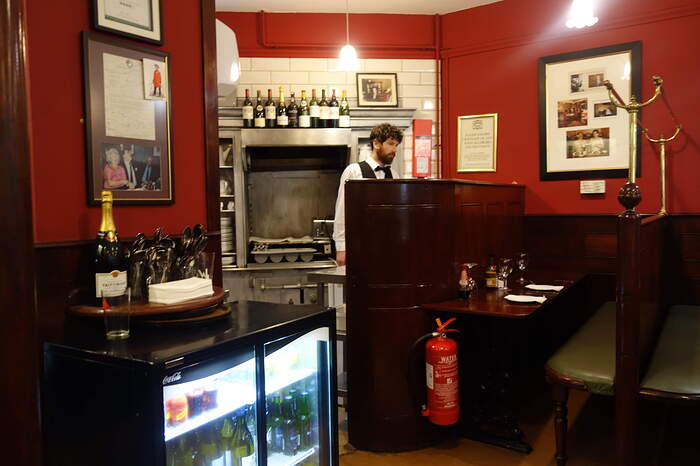 Your guy talks my language, Jan.

A good steak & kidney pie is hard to beat. Never heard of an accompanying sausage though. But when did a sausage not enhance something.

We adore this kind of place. Admiring this from across the pond @calam1ty.

Your guy’s treatments sound rough. Hoping for the best for you both.

the whole thing was at once solemn yet fun

I’m blagging that phrase. Expect it to appear in a future review I do.

I’m honoured. Can you see me curtseying, cos I am…?