Every once in a while I’ll stop in Cafe St. Jorge in SF’s La Lengua to enjoy some Portuguese desserts. After two years, I finally made it to their supplier-- Silva Bakery in Hayward. 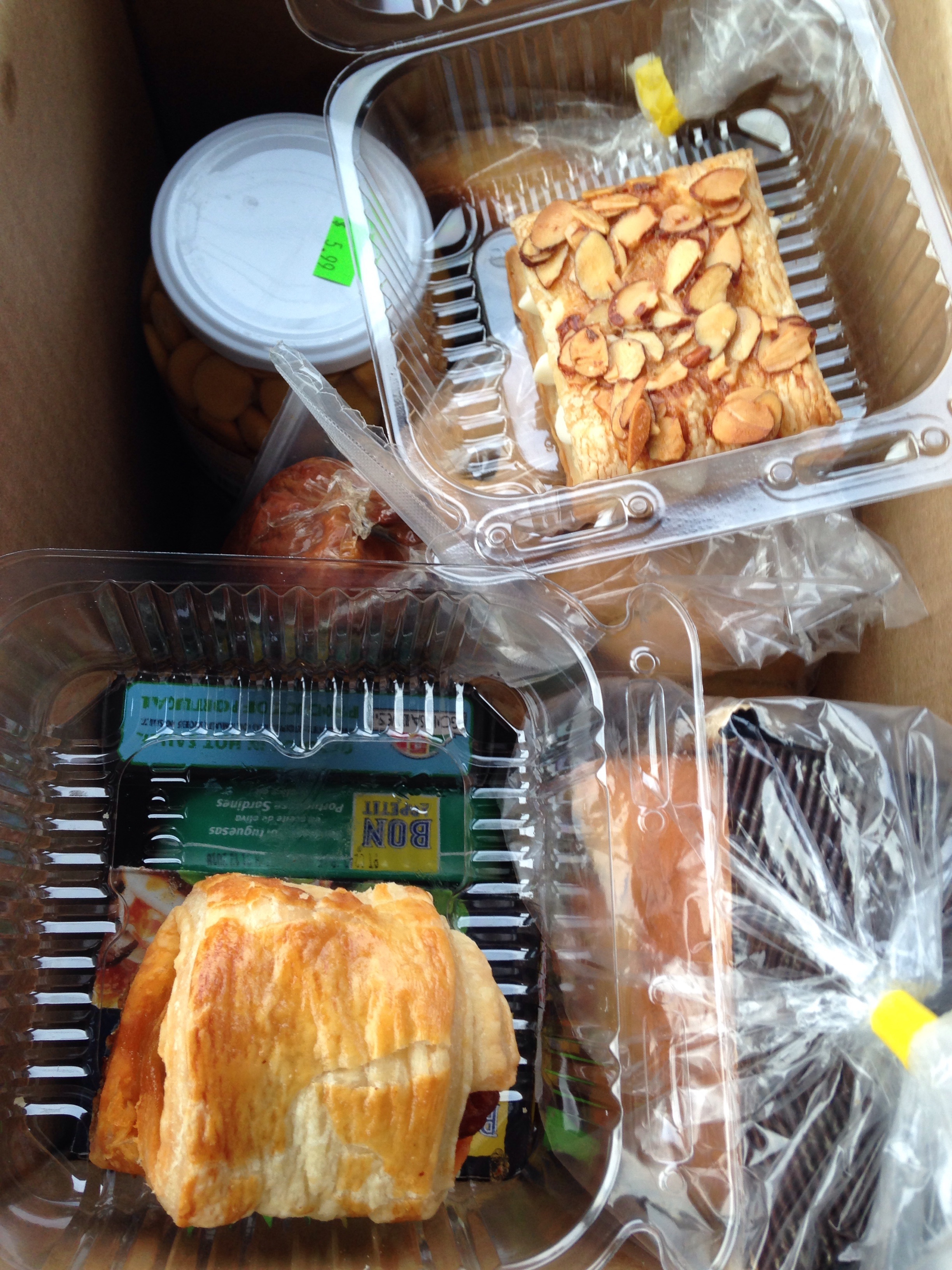 The owner, Al, was friendly and walked me through all the baked goods and imported foods they carry. At the counter, they had an almond pastry, made of puff pastry and filled with a delicious pastry cream. They don’t sell those at Cafe St. Jorge, so those alone were worth the trip. I’m not a fan of custard tarts, but having them fresh there almost tempted me.

Linguiça wrapped in puff pastry upped the ante on pigs in a blanket. 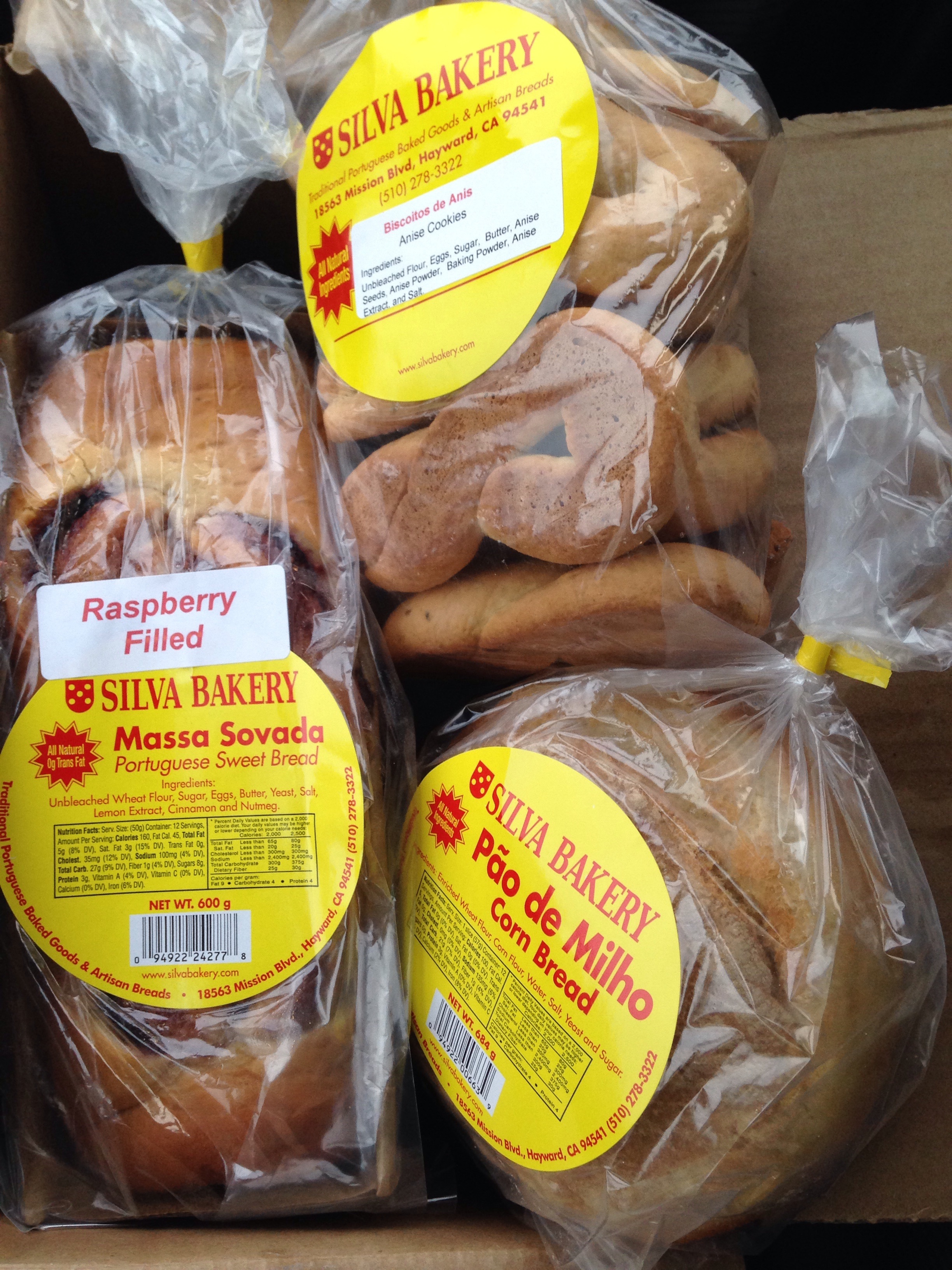 The bread assortment ranges from sweet to savory. A raspberry Portuguese sweet bread is flavored with lemon, cinammon, and nutmeg and reminded me of panettone. The corn bread is a wheat bread that’s given more heft with corn and went well with salami.

The anise cookies put out a wonderful aroma and are tasty too-- whole anise seeds.

They’ve got a bit assortment of canned seafood and it’s less expensive than gourmet shops. 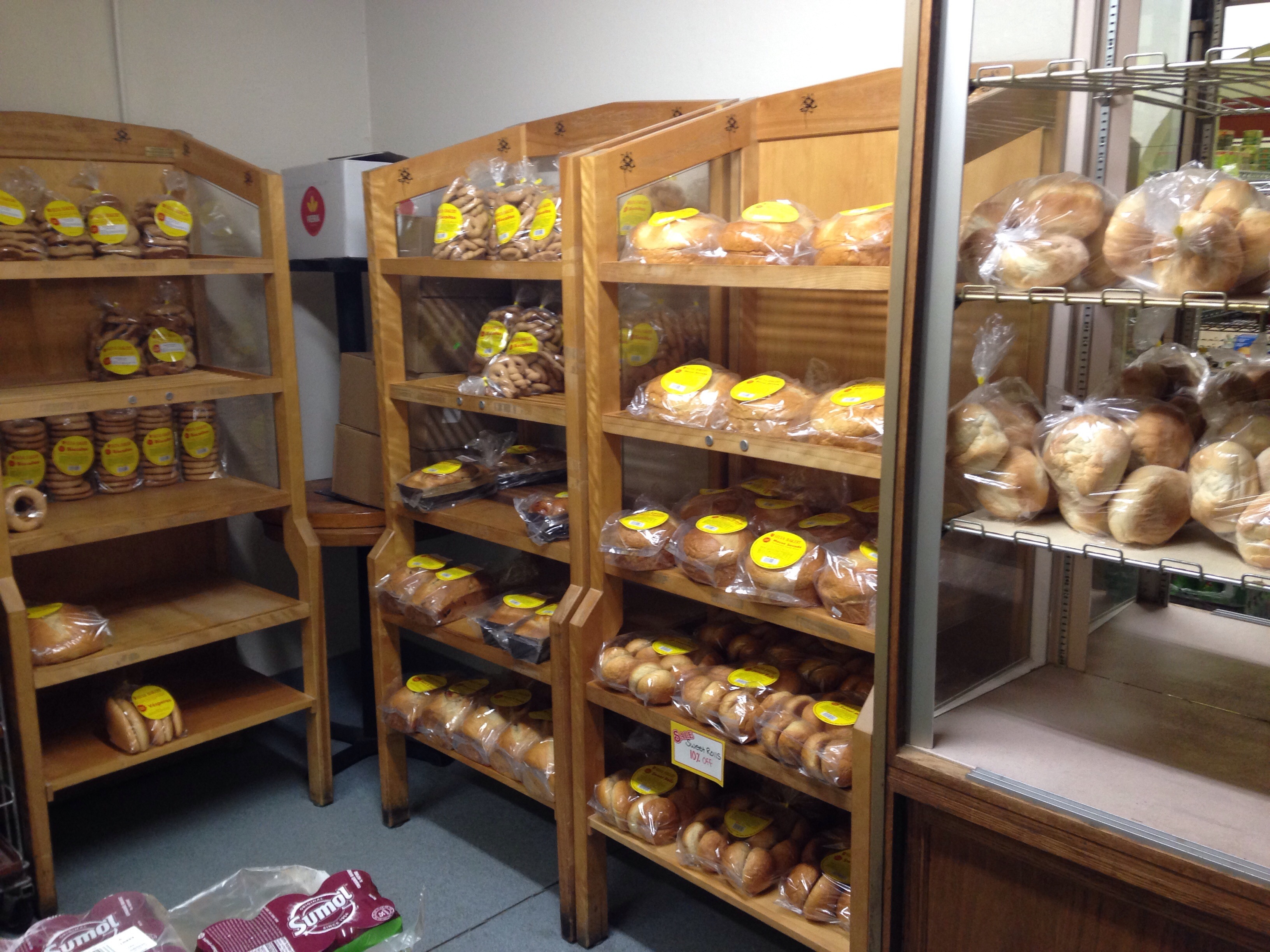 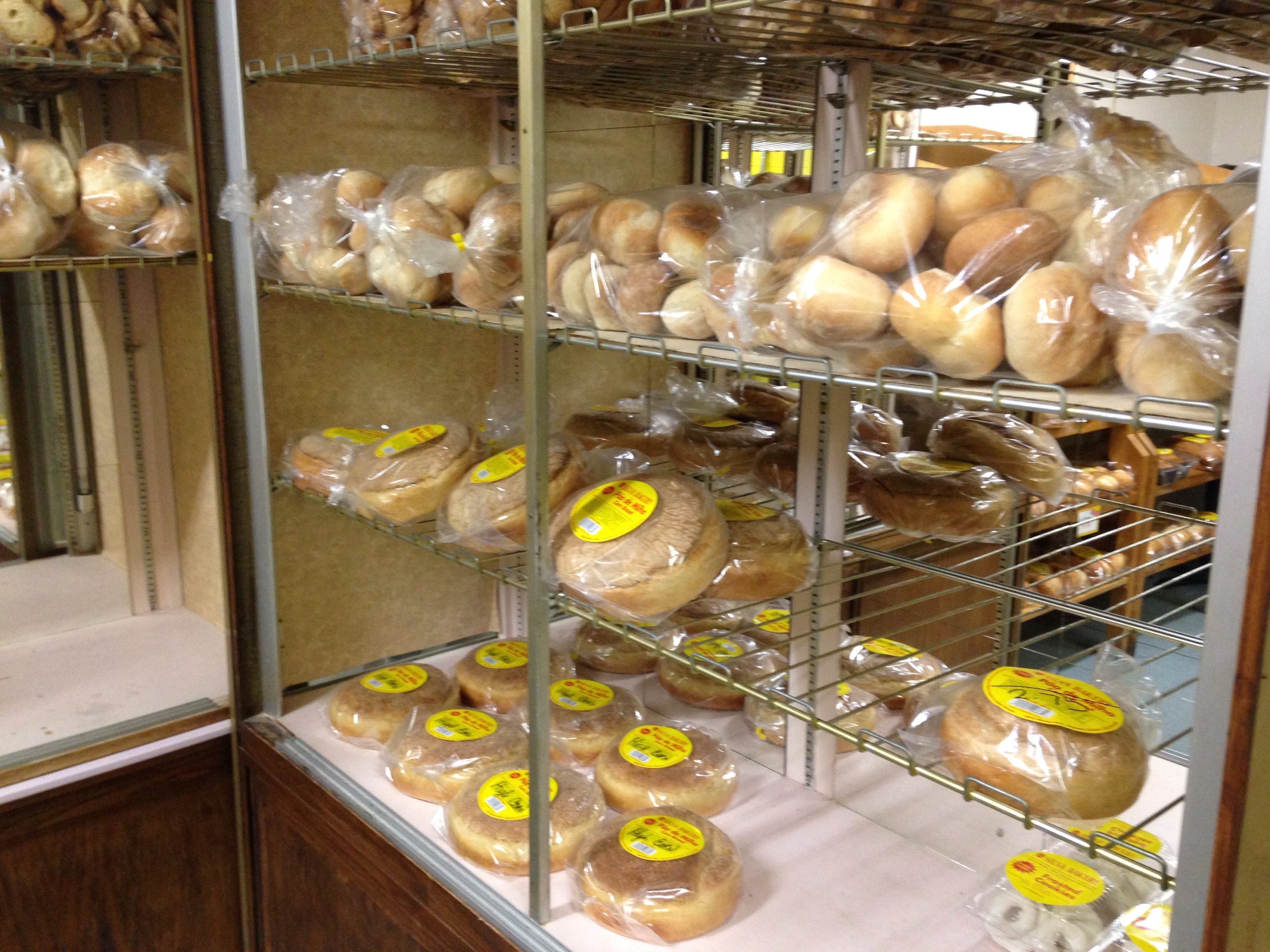 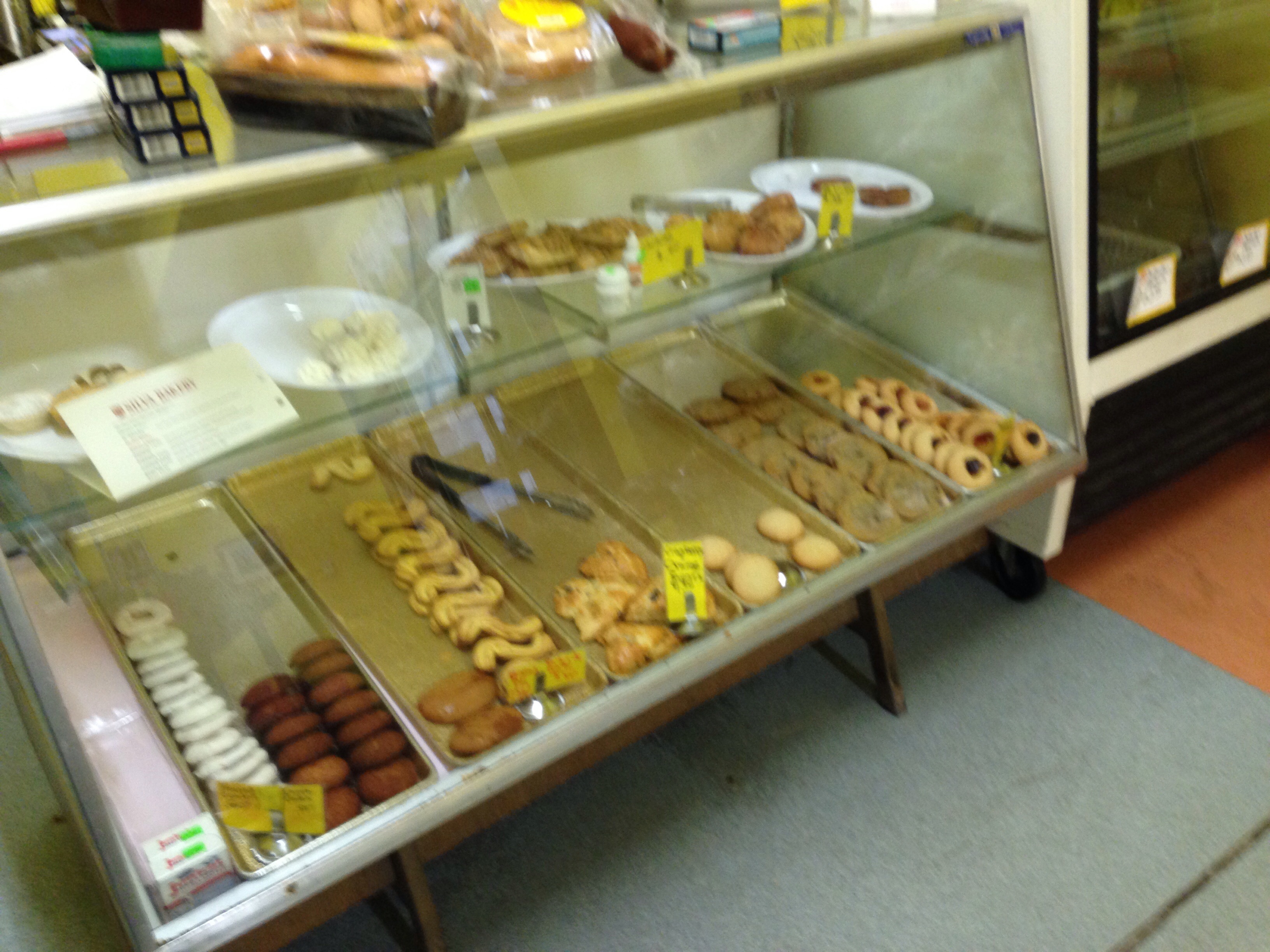 truly a find. if u don’t see it right away, it’s in a alley-like street behind the Jack in the Box on the corner of Lewelling &
Mission. bargain hunters go for the day old bread.

call before u go. hours are errantic. wasn’t open 7 days when lst tried their bakes.

He’s closed on Sunday and Monday, I think. 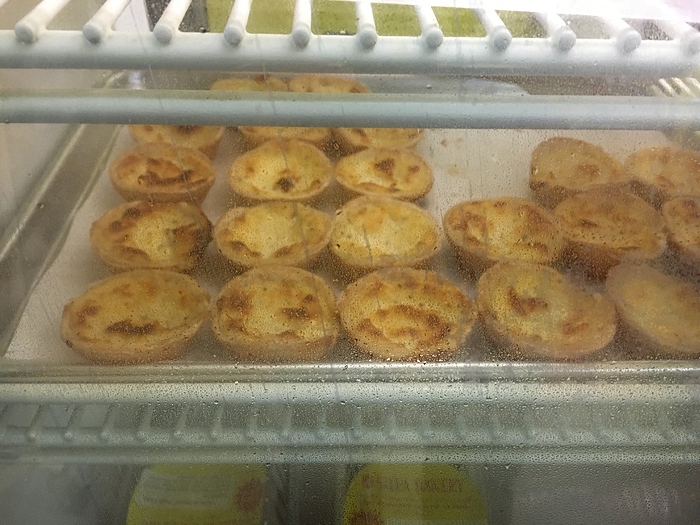 They had a $1.50 sale yesterday for Salted Cod with Cream tarts (Bacalhau com Natas). They look just like egg custard tarts, which they also sell, and tasted great.

It’s best to call ahead about availability – – they regularly make them on Saturdays, but I’m not sure about the rest of the week. Also, at least on Monday, microwaving was the only heating option – – next time, To better appreciate the crust, I would wait until I had access to an oven to eat them.

Never seen natas with bacalhau before. So its salty sweet? I need to stop by then the next time I head to Oakland.

Pick up a jar of lupini beans while you’re there. Great snack to keep in the cupboard for a midnight snack.

Have you ever been to Padaria Popular Bakery in San Jose? A selection of Portugese baked goods there too. I went there a few months ago but admittedly don’t know much about the available baked goods…

I’m not familiar with Padaria, but will check them out if I’m in that area.

They got some on last Friday. Good tasting tart I must say. They only got a few left when I was there.

They ran out of natas, unfortunately. The person who works there (Debra) suggests either visiting before 11am or calling in the morning and reserving them. She says the owner was born in Macau, and that while she hasn’t compared the two, the Macanese natas are less sweet with the crust using different ingredients than the Portuguese natas. I guess I will find out one day.

I didn’t realize the Portuguese owner was born in Macau! I would’ve thought the business is older, but it is only 10 years old—- they retained the baker from the cake bakery that had been there for decades.

The egg tarts have a Home made puff pastry crust, and the filling is less eggy than HK/Macau versions and also has some milk in it.

They had the codfish tarts today–so awesome! My South African-born wife said that she used to be able to get them in SA. We also scored some bacalhau, chocolate-orange biscochos, and canned stuffed squid. They also have some Brazilian goods, like Guarana Antarctica soda.

Wow, we will definitely visit here to see if we can try the codfish tarts. My DH is Chinese Portuguese and he ADORES bacalhau, lol.

BTW, we can vouch for the Abruzzo-style (Italy) bacalho appetizer chef Naccarelli makes at Trabocco/Alameda. Not cheap, mind you; but an unusual prep that he learned from his grandmother for the Feast of Seven Fishes. A unique dish no one else makes. You get to truly appreciate high quality salt cod, not mixed with anything.

I believe the African Caribbean Food Market, 547 8th St, Oakland (Old Oakland, just down from Chinatown) has various grades of quality of bacalhau for sale - or they did the last time we were there, which was a few years ago, admittedly. Certainly the largest display of bacalhau we’d ever seen anywhere.

The last time I needed bacalhau, I bought it at the now-gone Lucca Ravioli Company in the Mission. Excellent but expensive. We will totally be going to Silva for ours from now on; it’s way closer to us than Oakland.