In Siem Reap, I have the impression that food prices seemed to be kind of agreed between the restaurants, kind of uniform, I would say. For example when compared to Vietnam, I see a bigger range of prices between places. In Siem Reap, whether you eat at Pub street or tried other mid range eateries in the city, the price are more or less the same, whether they are good or bad food. I have this feeling in most of the cities.

Trying our best to avoid Pub street for meal, we had a beer there the first afternoon, when we tried to understand the map and the places we would like to go. There were several places on our lists, Sugar Palm were one of them. During our time there in end of June, the restaurant in Siem Reap was closed (Note that now they reopen with the address in Street 27). There was also Chong Phov on our list. I read about this place from Grantourismo’s site, Lara mentioned about it was newly opened (2016) and was considered an upmarket but casual atmosphere restaurant, chef Eng Im was ex Malis and cooked some divine local dishes… and it was recommended in some local eating tour…

We arrived with a tuk tuk, driver needed to call the restaurant at least twice to confirm the location. The place was quite big, had a big dinning room and some exterior seatings. We saw they had mosquito incenses and fans for outdoor diners. We chose to sit outside as it was a fine evening.

After checking out the menu with English, price were in USD, we ordered the following: 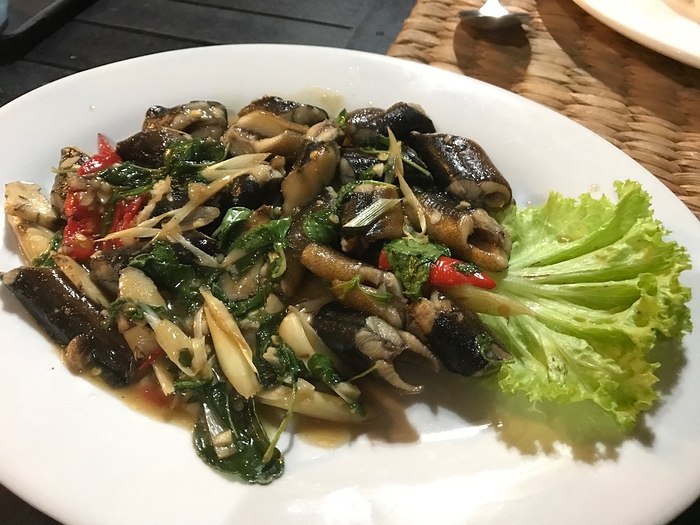 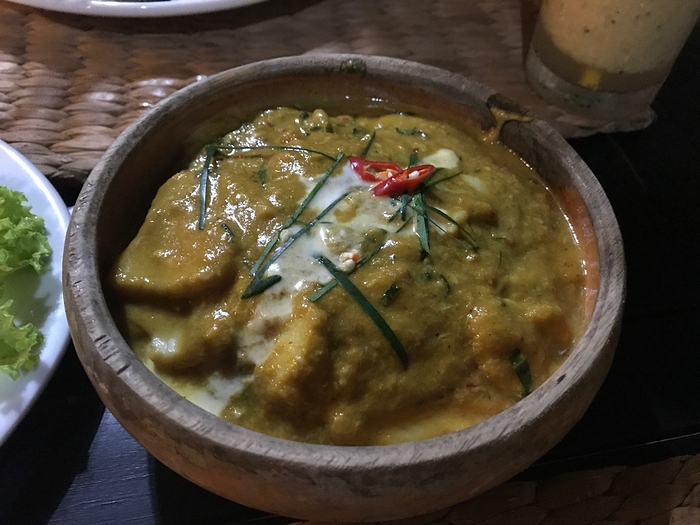 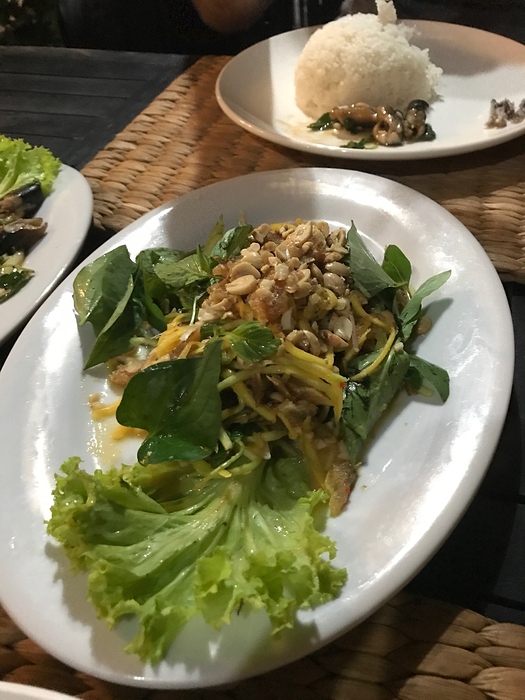 Roast whole duck with honey flavour - dried and skinny. I would not recommend this dish, only bones, not much taste, the skins had feathers. We left half the dish uneaten. 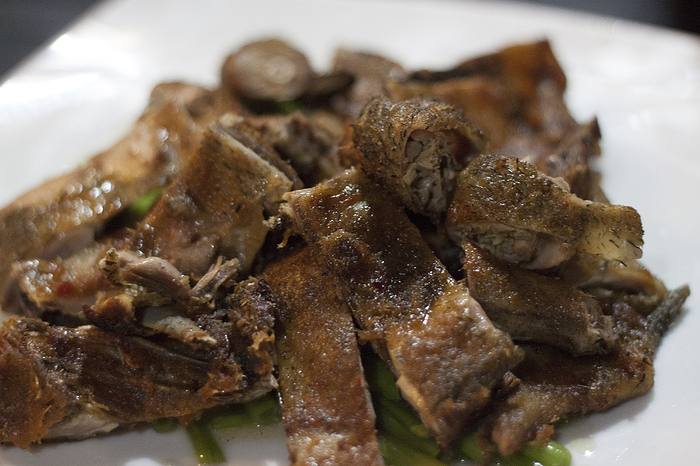 I would say the cooking was good with the vegetables and the fish amok, except that duck. It was my first day there, so I wasn’t sure if they like to cook bird that way plus the bird wasn’t of good quality. The eel might be slightly too cooked to my taste. Services was friendly. The chef came out to greet us after the meal.

We did not make reservation, but we were at the low season, there were 2 or 3 other tables occupied, but I bet at peak season, the restaurant could be busy. 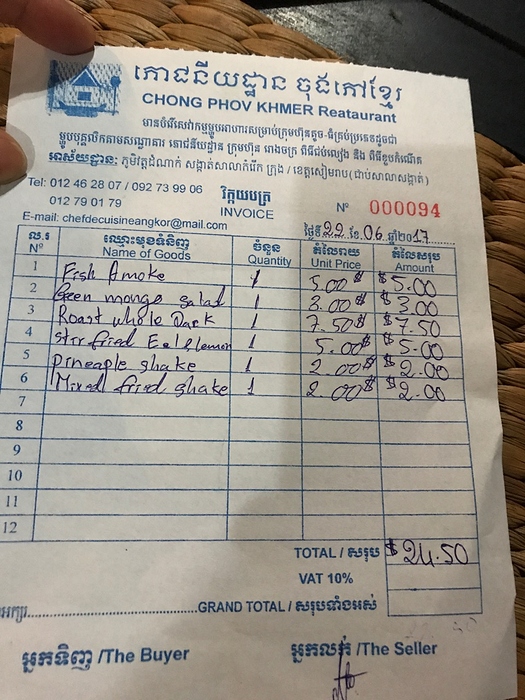 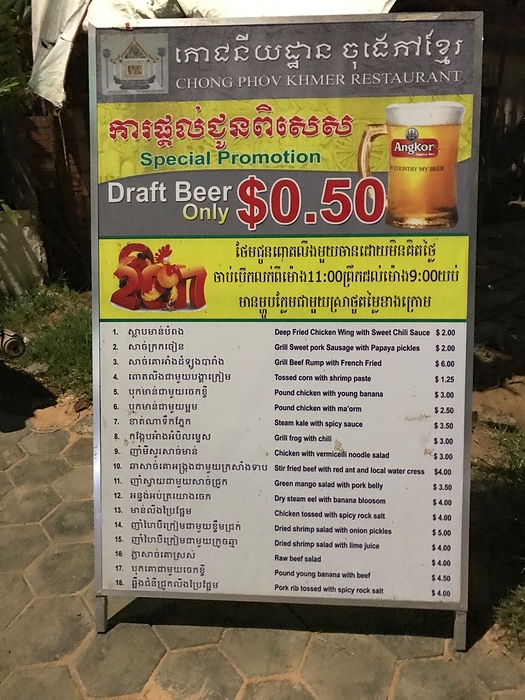 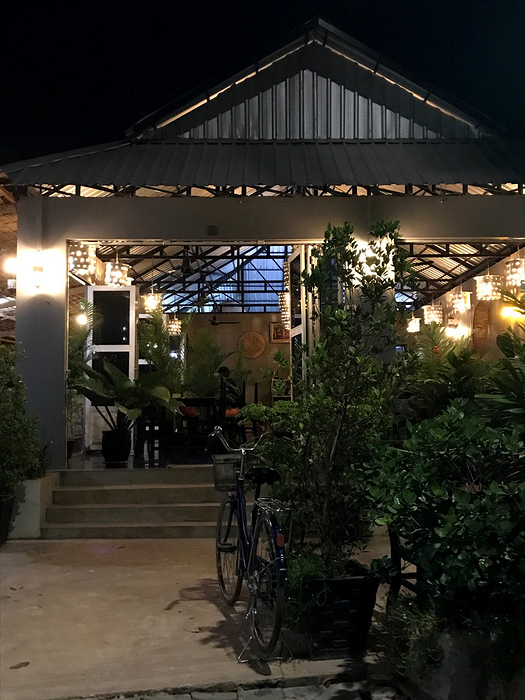 Very timely @naf. I’m off to Siem Reap tomorrow. I didn’t manage to get a table at Cuisine Wat Damnak as our plans kept changing and now they’re fully booked. Might see if they have any cancellations while I’m there. Any more tips appreciated.

Now it’s the peak season, the tourist flux is 5 or 6 times the time we were there in end of June early July. So best luck, for the worst, there is always street food.