Always in search of hot and spicy Chinese dishes, my lunch buddy Galangatron and I ventured to Watertown to the new Sichuan Cuisine at 30 Mount Auburn St., right on the 71 bus line. Our curiosity was tantalized by the Mala Lamb Spine (shown here). Sitting in a deep, ruby red sauce, the bones made for some of the most pleasant finger food we’d had in a long time. Owner Chen says that he has his mother to thank for the recipe. Forget about etiquette and just dive in with your hands. It was nicely spicy (but not incendiary) and had that ‘cooked-all-day’ look and flavor. They even serve it with plastic gloves in case you don’t want to get the red stuff all over your hands. We just dug in. Sichuan Twice-Cooked Pork had a great balance between the pork itself and lots of sautéed leek and garlic. A lovely dish. The wontons on chili oil looked elegant and quite delicate, but 'though the chili oil was deep red, there was little discernible heat. We wanted MORE! With plenty of two- and three-chili hot dishes on the menu, a spotless dining area, and very clean bathroom, we’ll be back to try lots more dishes including their Mala Spicy Pot (Mao Choi) with your choice of proteins including chicken gizzards, tripe, beef aorta and Squid. Service was attentive, friendly, and we sensed the staff’s pleasure with our own dining pleasure. This spot is right in the heart of downtown Watertown and there’s parking nearby. We’ll be back. 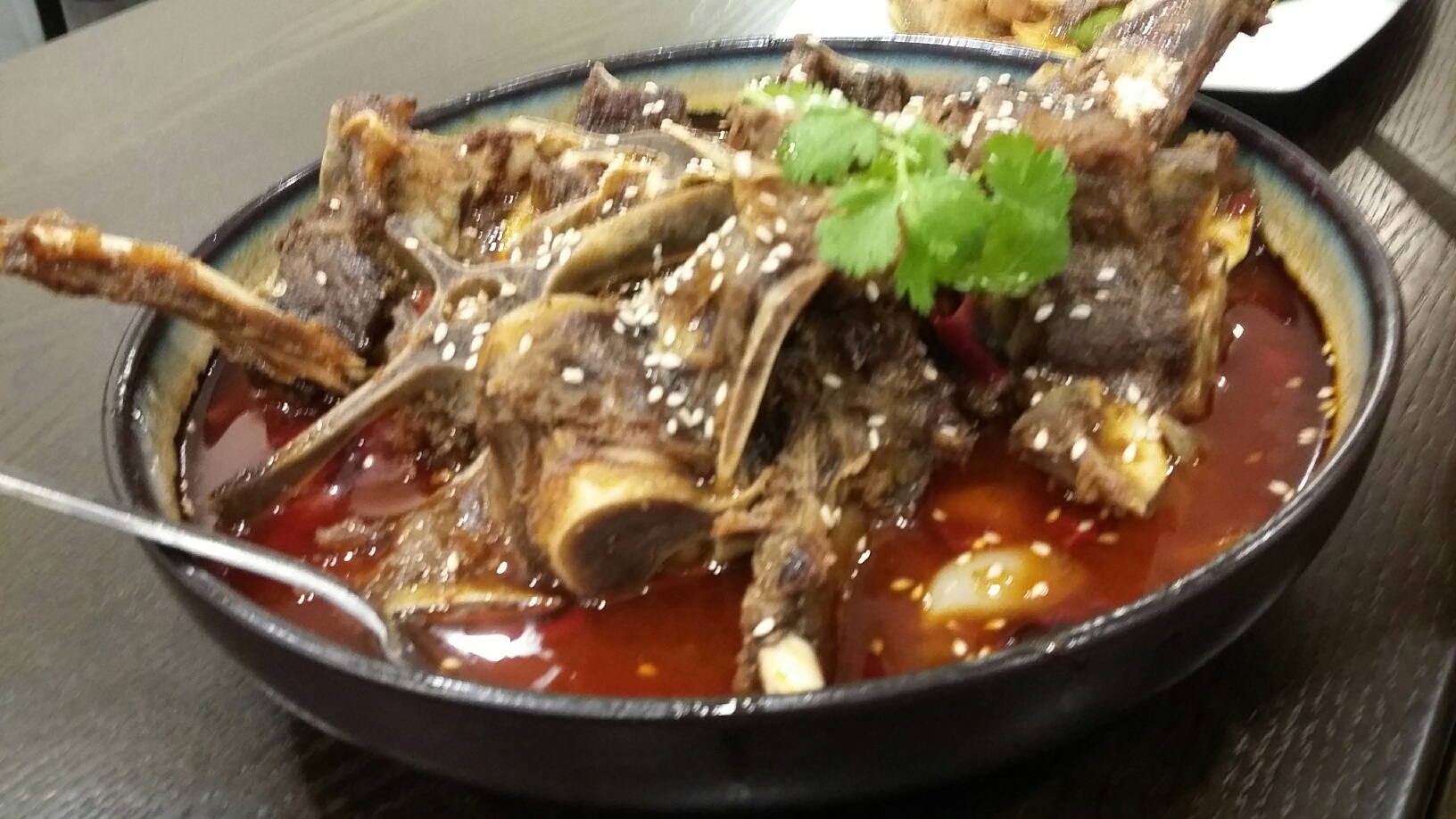 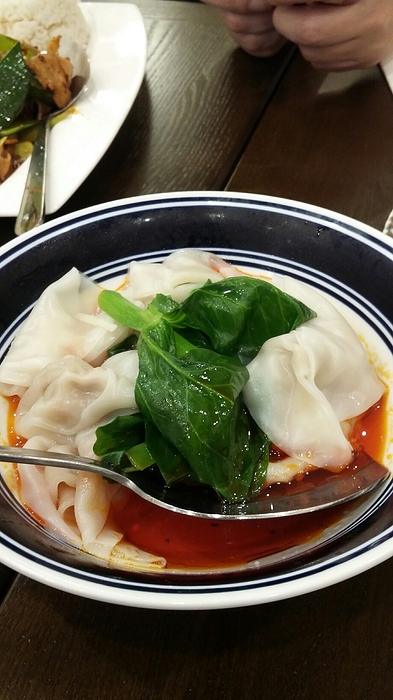 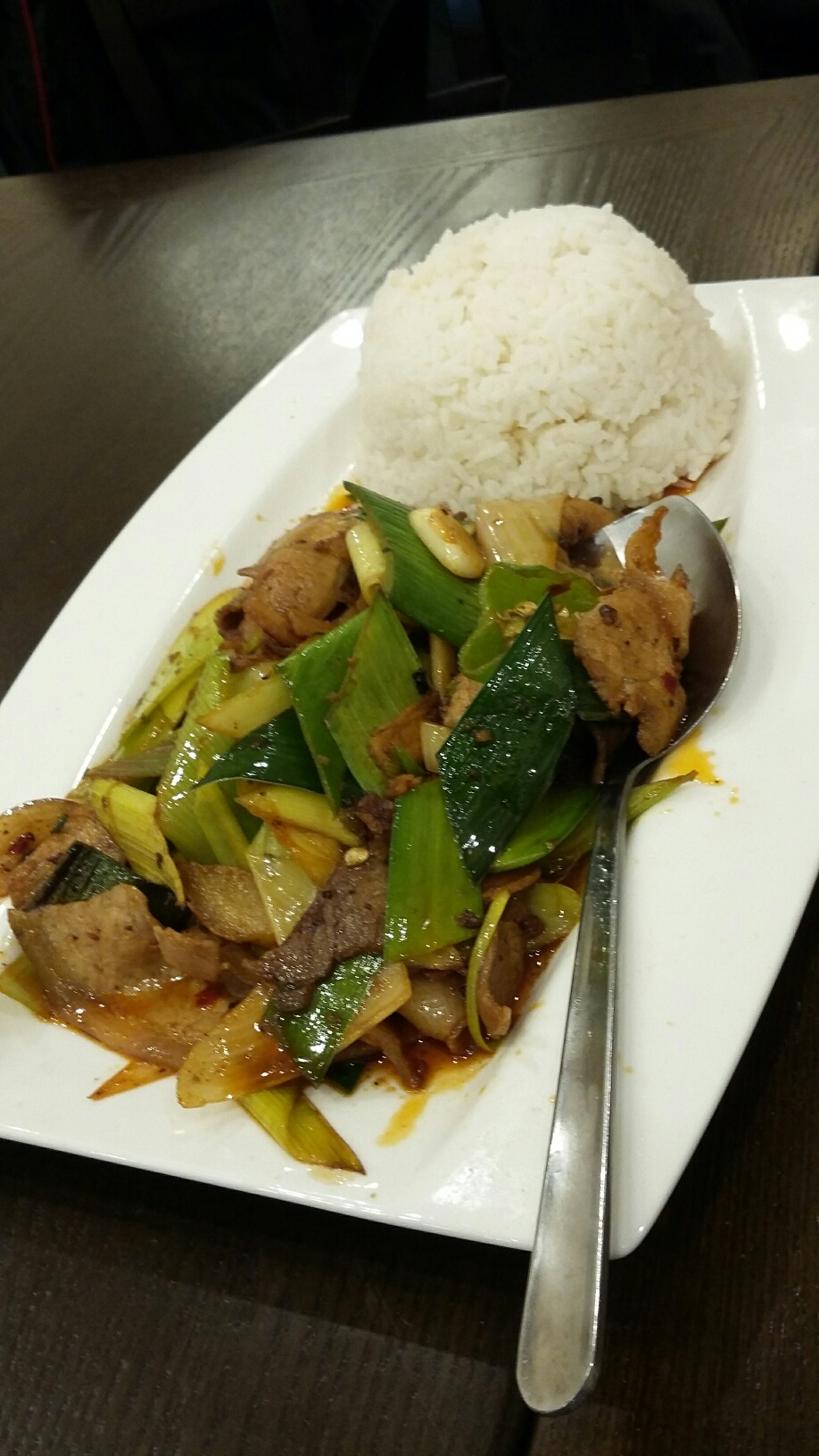 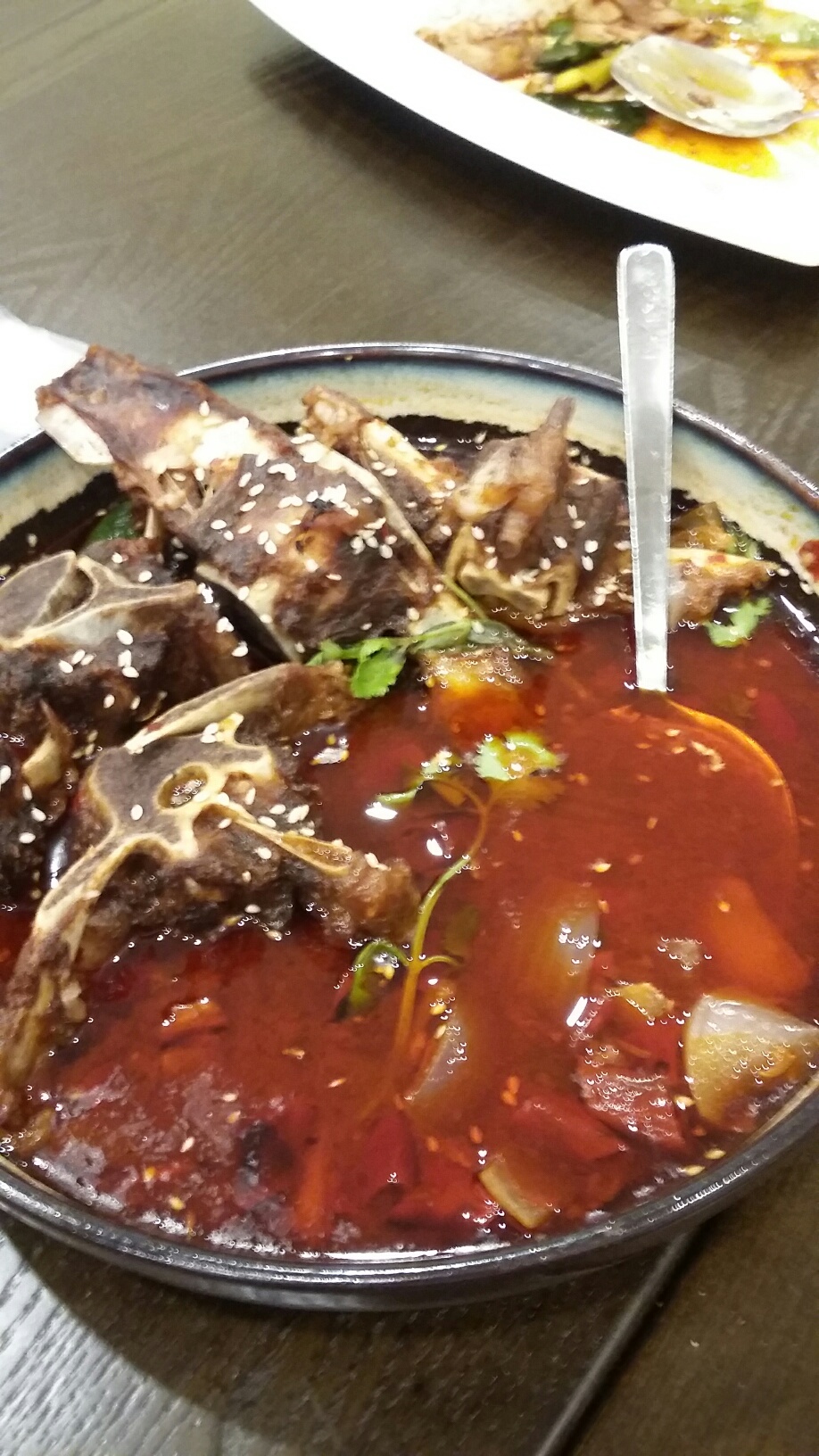 nice! thanks for the review. I gotta check this place out.

I didn’t even know it was there! Thanks!

I found their mapo tofu to be quite good!

I took a crack at this place while I was slumming over the holiday break, and came away suitably impressed. (Side note: I also stopped at Sofra for the first time on the way over and wow, I should go here more often. The gozleme I got for dinner later was delicious and the pogaca I reheated for breakfast the next day was spectacular. The tahini macaroon was less successful, but like Meatloaf said, two out of three aint bad). I was a solo act and so I could only sample two things, but they were both pretty good.

The cold bean noodle with spicy chili oil sauce was great, tender noodle and crispy peanuts swimming in a sauce that packed good heat and lots of flavor. Beef aorta with longhorn pepper disappointingly turned out to be made with bell peppers, but was still full of spice, had tons of wok charred chilis, brilliantly cooked vegetables and was loaded with offal. Aorta is really more of a texture thing than anything else, but overall dish was savory and intersting.

Unfortunately, I didn’t spy the specials board until after ordering but the proprietor was super nice and translated everything for me. It’s been a bit since I went, so I don’t remember everything but there were a couple of wonton dishes, a duck dish, I think a chicken dish and one other. The space itself is sort of nondescript but nice (it’s a few doors down from Home Taste) and it’s spotlessly clean inside.

A really good first visit here and would be excited to go back again–there’s lots of cool looking things on the menu and next time I won’t botch the job on the specials board. 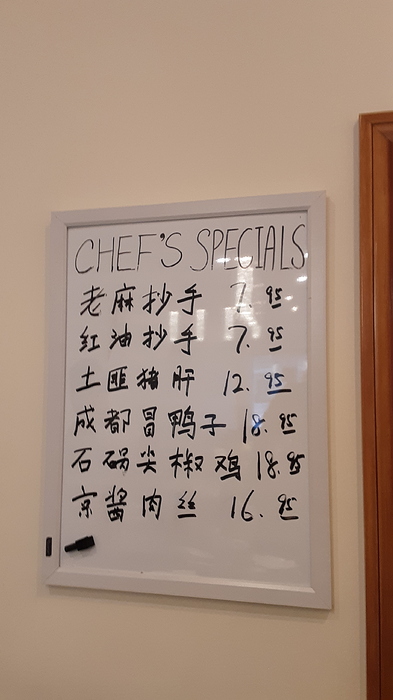 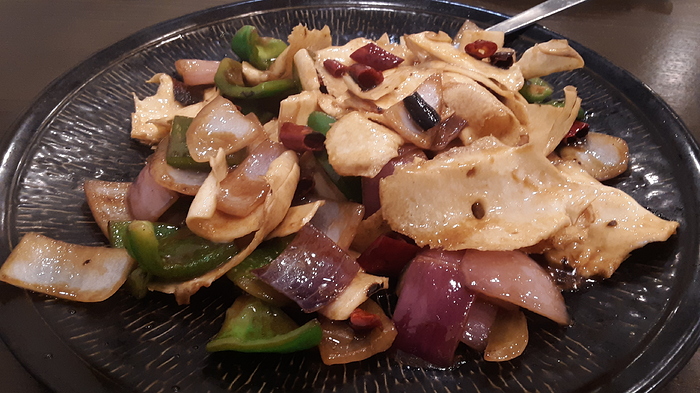 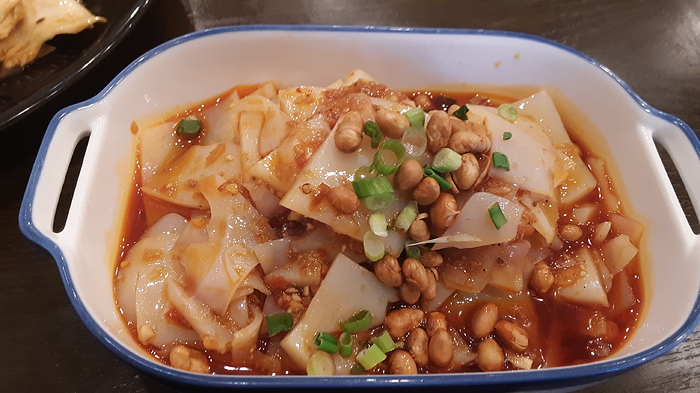 The chef’s special looks good. The third on the list “Bandit pork liver” catches my eye. I don’t think I ever saw that on a menu. Would probably want to try the duck dish too (4th on the menu).

Would probably want to try the duck dish too

yeah, if I had been paying attention I would have ordered the wontons and the duck off the board.

Interesting mix of Sichuan and Hunan dishes. Will like to hear from you the other dishes, if you decide to go back!

While @GretchenS pulls the strings to make me jump one way, @passing_thru just as cunningly jerks them to get me to lunge the other. This is what I got at SC:

Three of us ate very well, and we have leftovers for another three. The cost (there was also some rice involved) was $90, which is not overwhelmingly expensive for food this good, but not extraordinarily cheap, either. Part of the cost issue arises from large dishes that involve a lot of chili oil, as three of ours did. The oil is meant to flavor, not be drunk, so a good part of the volume of the dish cannot be ingested, an issue compounded by dishes such as the spine with a very high bone-to-meat ratio.

The duck sounds amazing. You have been eating well this week!

I’m not that experienced an aorta eater either, but I think that’s the way it’s supposed to be!

Here’s a site from which you can order wholesale all kinds of animal parts, aorta included:
https://esro.com/en/beef/

I’m not that experienced an aorta eater either, but I think that’s the way it’s supposed to be! 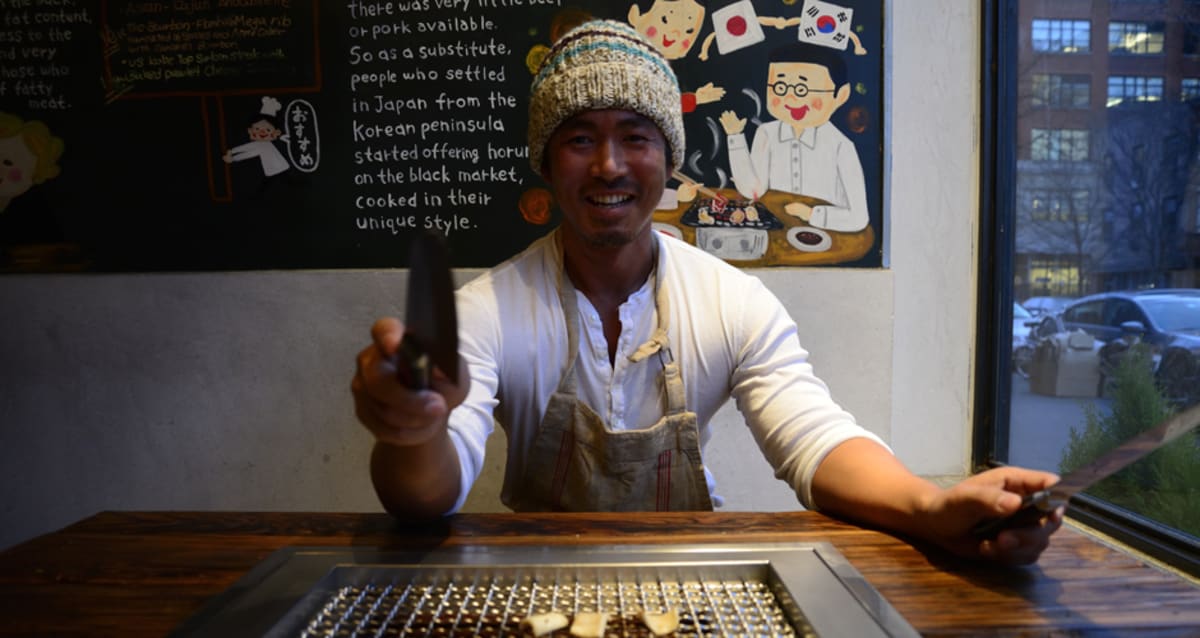 How to Eat Cow Heart: A Beginner's Guide to Offal

The meat maestro behind Takashi walks us through 10 delicious bovine cuts, from aorta to second stomach. Don't be scurred.

says this when you get down to aorta:

“The aorta is largest artery leading out of the heart’s left ventricle. Takashi makes intricate cross-hair scores across the cartilage prior to cooking. He explains that this cut is all about the texture. Name on menu : Kori Kori Flavor profile : The aorta does not boast much flavor on its own, but the texture has a pleasingly tough, chewy buoyancy. Cooking: The aorta cooks fairly quickly and is finished when browned. The cooked pieces take on the look of polished bone.”

I always wondered where I could get my hands on a pallet of paddywack.

Excellent instructional video for anyone who wants to learn more about this dish, or how to cook it in the traditional style.

I’ve only encountered dry black colored sichuan peppercorns. The green sprays of peppercorns that sometimes pop up in Thai dishes (at Dakzen, notably)- aren’t those a different thing entirely and not Sichuan? No ma la spice? Are green sichuan peppercorns a fresh version? Tell me more!

Mind. Blown.
Anywhere else I can encounter this rainbow of Sichuan peppercorn goodness?