There is already a discussion about this place in another thread, but I think it deserves its own thread.

Had lunch here today, bottom line; less than impressed. Most complaints in the other thread was regarding the rye bread, I had pastrami on their wheat/whole grain and the bread was actually good. The pastrami however was “ok” but seemed a bit dry and every bite had a bit of chewy fat to it. Someone asked in the other thread if they sliced with a knife like Katz, they do not they use a deli slicer. In my opinion that’s a sign that the meat isn’t that tender I believe a good deli pastrami of this nature would get shredded by a commercial slicer, this does not.

Also had a chicken soup which was homemade and very good. Could have been a little hotter but good just the same. 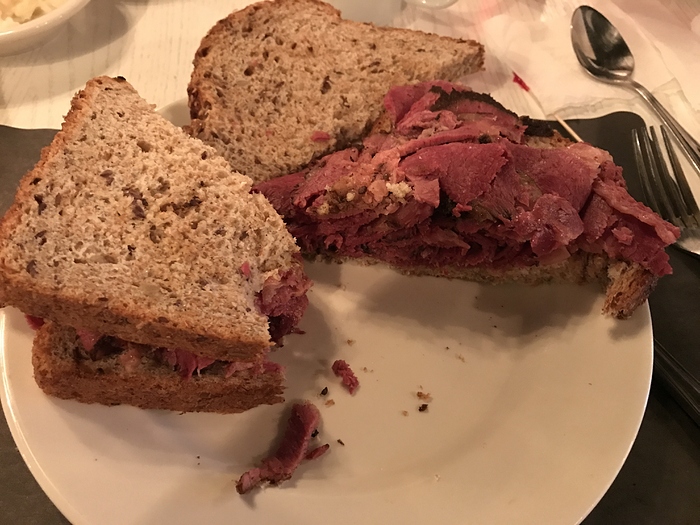 Good LORD. I don’t even know where to begin–so I won’t, except to say that between this post and the others, I have no need to try. Frank’s in AP works just fine when I need a pastrami fix!

Also, the bad change thing is one of MY big peeves. Doesn’t anyone teach servers the basics? I don’t expect everyone to be like Danny Meyer’s teams, but yeeeeeeeesh!

Our disappointment was not just the rye bread. I mentioned the pastrami was too fatty. I replied on the slicing machine on the other thread.

It is disappointing that problems continue even after a customer returns to point them out.

I was very happy with Deli King in Clark for pastrami on rye, slaw and outstanding pickles.

I flagged the other thread asking for it to be merged here, let’s hope they do that. Yeah it was just an “average” sandwich at best, if it were a diner or bar it would be “acceptable”, for a place promoting itself as a Jewish deli, it kind of sucks.

Well I like some fat on mine. If it’s going to be sliced on a slier it should be round not brisket & round has almost no fat. I prefer a nice tender brisket sliced with a knife.

Well, these reports are certainly discouraging. I was looking forward to this place, now I think I’ll give them a few weeks and hope for the best.

Interested to see if the brisket and chopped chicken liver are any good.

Also I neglected to mention in the original post, the reason for the picture is for $ 12.00 I truly expected the meat to be piled high. No not like Harold’s in Edison, but at least enough for me to have to stretch my mouth a little bit, nope honestly I found the size of the sandwich to be rather paltry for $12. (and let me say again I didn’t get my f’n pickle!!! Uggghhhh I really wanted to try their pickles!!)

Your pastrami sandwich on whole wheat had double the amount of meat ours had that day. But since it was a lousy cut, more meat wouldn’t have helped.

The pickles they offered when we returned was a two slice; one dill and one garlic in a baggie. Coleslaw was a very small cup.

While they claim to make everything in house, that cole slaw I suspect is not home made. Personally I cannot stand the vinegar based cole slaw recipes. Also I prefer a whole dill pickle (or ideally choice) rather than sliced variety. Bring back the old pickle bowls on the table!!!

Disappointing to say the least…probably will not bother and they won’t be around that long if things don’t improve enough to pay the Broad St. rent…

For what its worth Katz is really the only place that hand slices, so that alone isn’t a deal breaker but lots of other things definitely are.

Does anyone know who smokes their pastrami?

I’m bringing this reply over from Red Bank Redux.

I saw a cryovaced Hebrew National in the meat case as I was waiting for a sandwich on Friday.

I went there hoping you people were all lunatics and it was the best Jewish deli to open. Sadly you are not lunatics. The pastrami was average, almost what I would expect from any deli/diner touting a hot pastrami sandwich. It needs to be better than average, and I’m going to guess that is going to start with the purveyor. Heck, the pastrami from World Market is infinitely better than this. The chopped chicken liver needs work also, weirdly devoid of flavor.

And yes, the price to quality/value ratio is off. I won’t pretend to know the economics of running a new sandwich shop in Red Bank, but $12 for that seems out of line. Adding $5 for a measly amount of (bland) chicken liver on the sandwich seems way out of line as well, certainly given the proportion added to the sandwich.

So, don’t get me wrong I thought it was a good sandwich, not bad. But if you are a new Jewish deli I think you need to be better than average and work your way up from there. Everyone seems nice, and they were very busy on a Friday afternoon. I truly wish them the best and hope, for me, that some things change in the future.

So, I am near here a lot lately so I thought I’d give them another try. Much, much improved.

I had their take on a fat sandwich with brisket, gravy, cole slaw, and potato latke on a very good rye bread. I don’t eat as much in one meal as I used to and this baby was hard to finish, but I did. I am officially adding them to my return list.

will have to check this place out now- would be nice if it was good.

Dave they have smoked pastrami empanadas with swiss and sauerkraut at local smoke now…oh and with Russian dressing dipping sauce. I’d call before you go though, as I wouldnt want you to make a special trip and have them be out. I ordered before I saw these on the special board. I may try to get there tomorrow night depending in the weather.

The brisket was soft and flavorful and my father liked the tongue. Did not try the pastrami yet, but maybe next time.

CJ - that sounds great. Post when you try them.

We needed to be in the Red Bank area today and tried Shapiro’s Deli for the first time today for lunch. Extremely disappointing in most respects.

The Good:
Pleasant, helpful and attentive waitress
Owner checked on us several times.

The Bad:
Everything we ordered.
Matzo Ball Soup - The broth was barely warm and the matzo ball was tasteless - Strike One
Pastrami and chopped liver on rye - Poor quality pastrami that I feel certain had been microwaved to heat up. No way this came out of a steamer. The chopped liver tasted old and was gummy. - Strike Two
Brisket on rye - the brisket was dry (again not from a steamer) and the gravy was made from a mix or out of a can, all artificial taste with no real beef flavor. - Strike Three

We sat there wondering how they have stayed in business and the answer became apparent. By listening to the take out orders being called out and other patrons orders it became clear they sell mostly salads and turkey, tuna salad and egg salad sandwiches. Nobody was ordering corned beef or pastrami or the other jewish deli staples. They survive on just being a sandwich shop not a jewish deli.

Needless to say we will not be returning.

Well you saved me a trip Jeff. This was father down on my list but I did want to visit. The Monmouth county pastrami scene isn’t the best.

Disappointing. I’ve wanted to try that place for a while.