Billed as a Hong Kong dessert place, Sweethoney Dessert now has 7 branches in the Bay Area. They are a Guangzhou Dongguan-based chain. We went to the one in Mountain View, near Castro Street. We ordered the mango pomelo and sago tofu pudding sweet soup, and the snowcapped mountain mabao jelly

Instead of the mango pomelo and sago tofu pudding sweet soup, this, which had grass jelly and some red stuff and no tofu pudding, showed up and we absent-mindedly started eating. The biggest issue with this ‘soup’ was that its watery. No amount of sago or mango could have saved it. 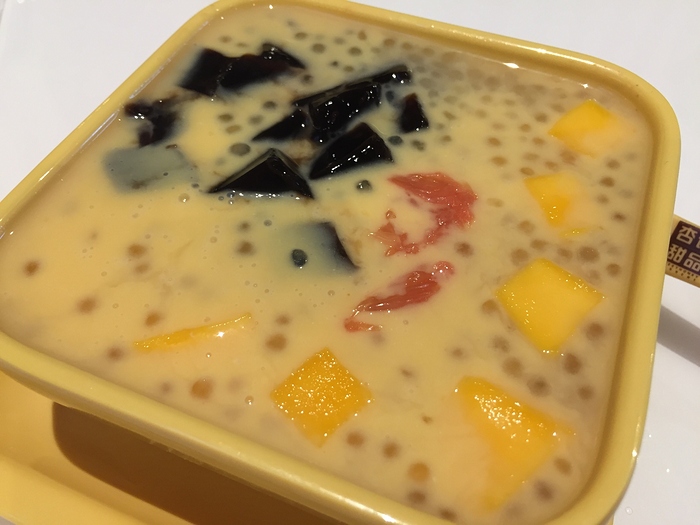 Snowcapped mountain mabao jelly was better, with the white shaved ice being crunchy and quite delicious. The icecreams were acceptable. 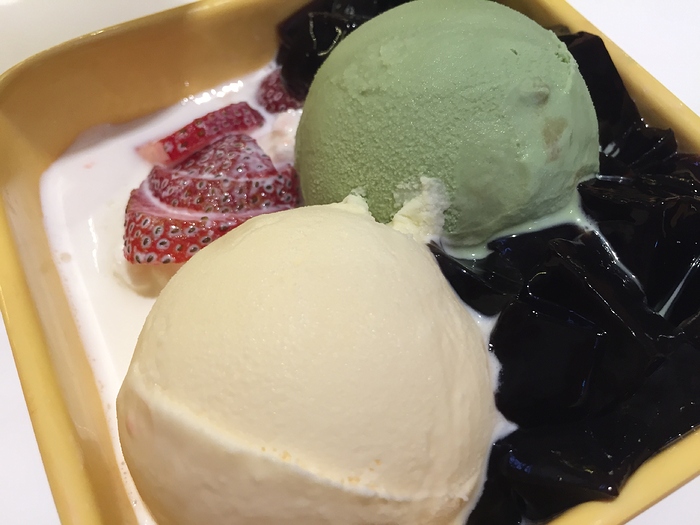 Looks like they delivered the next table’s order to us. When our original order finally showed up, we suggested to the next table that we might be eating theirs and joked that now we had too many desserts. Then the server showed up, took the correct order away, went back to the kitchen, came back to the next table and delivered ours to them with some grass jelly on the side and asked if its ok that they eat that instead. No apologies to us or to them. And I don’t know why they took away our correct order. And I really don’t know why I still absent-mindedly tipped afterwards.

Plastic plates and bowls were used. ETA: For more than $6 a bowl, it felt a bit cheap. One of the bowls had a one inch crack.

Service issues aside, I think Cong Sao, or something more mass market like Hui Lau Shan, in Hong Kong are much better. I have had HK style desserts that are too sweet or too rich, but never had one that is watery, until this time.

Thanks for the review. I appreciate the more traditional desserts than the newer (often with ice cream) based desserts.

I don’t think Hong Kong is known for icecream. Hong Kong does have a bit of a monopoly on mango pomelo dessert, however.

Does any one know if the Hui Lau Shan/ Creations Dessert on Geary is any good?

From the picture it looks like the red pomelo variety (think it might be a grapefruit hybrid?).

I’ve been to the Colma location which is their supposed Flagship store. I thought they did an okay job, but the pomelo mango sago was a little bit more watery.

Regarding Creations, I’ve been there a long time ago and thought their mango mochi was pretty good (but I can’t tell if thats even made in house… haha). Their lemon tea was terrible though; held a menu behind the drink and I could barely see the hint of tea.

Regarding Creations, I’ve been there a long time ago and thought their mango mochi was pretty good (but I can’t tell if thats even made in house… haha). Their lemon tea was terrible though; held a menu behind the drink and I could barely see the hint of tea.

That’s not a good sign- lousy lemon tea… Forgot to add the tea?

I honestly have no idea. It was rather late at night so maybe they were running out…? still not a good excuse

I just tried the Sweethoney dessert that opened up in Davis. I thought their pomelo mango sago wasn’t really watery/runny. I thought they did a good job for what it was though I wish the dessert was colder (then again it is like… 100F outside)

I think there probably are variations across the different Sweethoney branches. Maybe the person in Mountain View just got the ratio of stuff-to-water wrong.

Yeah that makes sense. I’ll have to try the Colma branch one more time to really remember. Most of the time, the line is out the door and I don’t feel like waiting.

Yet another name from them now after the recent construction- Dragon Creation Dessert.

I tried the Colma branch recently and still think they’re probably one of the better HK style dessert places.

Friend really enjoyed their durian dishes (mochi and what not) but… I think that’s more of a durian love.

I gave their almond milk and egg white and thought it was a little bit more creamy than I cared for and wished it was hotter. It certainly doesn’t have the same charm as the one at Yum’s.

Their pomelo mango sago wasn’t too watery imo but I wished the dessert was colder.

Not too sure why things just seem more towards luke warm/cold.

Place was packed though.